The State of IT Outsourcing In Poland

of IT professionals available on the market

the estimated worth of the IT market in 2022

of tech talent being employed by foreign capital

IT Outsourcing and Offshoring in Poland

Population: 38.18 million, ranked 37th in the world by population

Economy: mixed economy, one of the fastest-growing economy in Europe

The WE Forum Global Competitiveness Report: #37, with a year to ear improvement in score

IT outsourcing in Poland at a glance

Poland's central location on the European map makes it a strategic gateway between East and West, always within easy reach. The country serves as a role model for successful transformation, evolving from a communist state into one of Europe's largest economies in the span of merely three decades. Since joining the EU in 2004, it has experienced unprecedented economic growth, becoming the first former Soviet bloc country to reach a developed market.

The Polish software development services market is also thriving, representing about 8% of the country’s GDP. Poland has the largest IT specialists pool in the entire Central & East Europe. Its broad ecosystem of innovative startups, entrepreneurs, and enterprises, combined with robust digital infrastructure, encouraged numerous global corporations to move their operations to Warsaw, Krakow, Katowice, Wroclaw, and other outsourcing hubs.

The Polish IT sector orientates strongly towards international projects. 34% of half a million IT experts work for companies with the Polish capital, while foreign organizations employ the remaining 66%. IT services account for one-third of all Polish services exports to the USA.

These numbers shouldn't be surprising considering the high profitability of foreign investments. According to a joint report by KPMG and the American Chamber of Commerce, "every dollar invested in Poland by American companies creates 50% more value than other foreign investments."

The interest of multinational tech corporations in the Polish IT market is evident. And it is easy to account for. Poland consistently ranks as one of the top three countries with the world's best programmers. Polish software developers top the charts in Java development and score second to fifth in Python, Ruby, Shell, and algorithms (source: HackerRank). Significantly, a recent report by Google and Dealroom found that Poland has the most startup ‘unicorns’ in the region.

If we look at the 2017 Digital Evolution Index (the latest available), we can see Poland among digital innovation leaders. The Polish IT market is currently estimated at $12.87 billion, an increase of more than 7% compared to 2020. The category includes the segments of IT equipment, software, and IT services.

Labor cost is likely the main concern for companies considering hiring offshore software developers from Poland. With quality comes the price. And obtaining services in a country that offers the largest and most diverse talent pool, the most reliable infrastructure, adherence to EU standards in IP protection and data security, and the greatest ease and transparency of doing business, cannot be cheap.

According to the 2021 report by the Sedlak & Sedlak consultancy, Java Junior Software Developers in Poland earn between $1,000-$2,000 per month, depending on their skills, location, and type of contract. Mid-level experts get between $1,900-$2,680 per month, while expert programmers earn $3,800 per month on average (with top pays exceeding $4,300/month).

Looking at other IT senior positions, we’ll learn that support specialists get about $1,800 per month on average, data analysts earn from $2,000-$3,300/month, while seasoned frontend programmers’ pay ranges between $2,900 and $3,700 monthly.

Compared to salaries in Ukraine or Belarus, the rates charged by Polish specialists remain in the top tier. Nearly half of them get paid at least $2,000 a month, with over 13% earning twice that amount. Meanwhile, 40% of IT professionals in Ukraine only get about $1,000 per month (Source: NoFluff Jobs).

Still, Polish IT experts are very much in demand. So, what’s the conclusion? They clearly compete on expert skills, impeccable work ethic, service reliability, and ease of communication, rather than low rates.

Investing in the Polish IT market

Broadly recognized for modern IT infrastructure, high economic potential, and a well-educated, highly-qualified workforce, Poland is currently the European leader in terms of the size of foreign direct investment, with the IT and tech market largely contributing to its success.

The subsequent years indicate an apparent shift away from outsourcing basic, low-skill installation and support IT tasks to the Polish workforce in favor of delegating entire projects and services to Poland-based outsourced teams. This trend also shows in some of the most recent (and noteworthy) examples of global IT and tech investments.

The largest international IT companies operating in the country (by revenue) include Dell EMC, HP Inc, Lenovo, Microsoft, and IBM Polska, followed by other prominent names such as Intel, Apple, Cisco, Oracle, Xerox, Sabre, or Google. 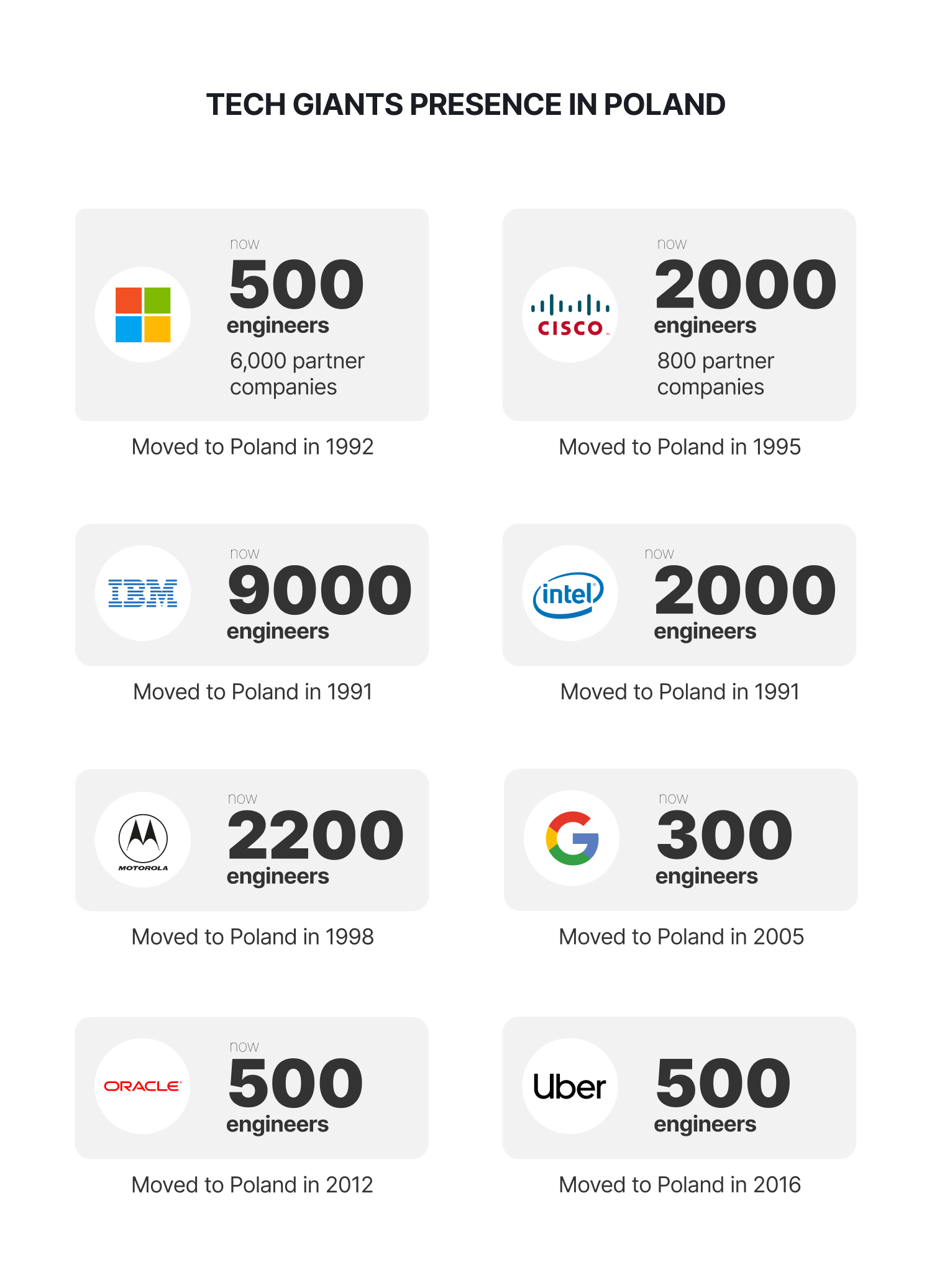 The new regulations mean that the availability of tax reliefs no longer depends on the location, but it's calculated based on a variety of factors that include:

The period of tax exemption varies from 10-15 years across regions.

Additionally, the Polish regulations provide tax deductions for R&D activities, the scope of which is contingent on the company size and the type of eligible costs. These may fall into one of six categories, including employees' wages and social contributions, expertise, research and insights from scientific units, the costs of obtaining IP protection, etc.

Apart from these incentives, in 2019, the Polish government established the Innovation Box scheme. It applies a preferential, 5% tax rate applicable to income derived from IP rights (i.e., among others, author's rights to a computer program or a patent).

→ More details about Poland's broad range of investment incentives can be found on the Polish Investment & Trade Agency's website and in PWC's Worldwide Tax Summaries.

In the last few years, Poland has joined the most startup-friendly countries in Europe and beyond.

The Polish startup ecosystem ranks 30th in the Global Startup Ecosystem Index 2021 (much higher than Romania – 41st, Hungary - 49th, Belarus – 67th, and above Ukraine – 34th). The capital city, Warsaw, took the 78th spot in the cities’ ranking. Several other cities such as Gdansk, Krakow, and Wroclaw can also boast a remarkable concentration of coworking spaces, accelerators, and incubators.

In 2019, the VC funding for Polish startups increased by 800% compared to the previous year. By mid-2020, the investments in the VC market reached a level equal to that of the entire 2019. Going further, in the first half of 2021, Polish startups acquired over $243 million from investors - more than 55% of the value of investments throughout 2020.

This vigorous growth dynamics of the Polish startup scene has been further confirmed by Poland’s status as the country with the largest number of startups classified as unicorns in Central & East Europe (data from 2021).

Get the full report

Get your free copy of the report now.

IT outsourcing... reinvented!
Why work with Polish developers?

Best devs in the world

Central & East European countries are world-renowned for their software developers who are said to be one of the best on the globe.

There are over 1 million software developers in Central & East Europe, skilled in various technologies and experienced in every industry.

Software developers' hiring rates in Central & East Europe can be 2-3x lower when compared to the US and Western Europe.

Looking for a trusted IT outsourcing partner? Hear from our partners and clients.

Ideamotive has a huge pool of talent. Don’t just settle for someone: find a person who understands your project and has the competencies you need.

We’ve been extremely satisfied. We work with multiple partners, but they’re our main supplier because of the quality of their work.

They understand and navigate the industry to deliver an outcome that will truly stand out. Despite a heavily saturated market, they’ve delivered creative solutions that I haven’t seen before.

They are very flexible, providing a team of developers on short notice and scaling the size as needed. Their team meets tight deadlines, including some that only give them a few hours to do the work.

Read more about other top IT outsourcing destinations from Central & East Europe:

IT outsourcing in Belarus

IT outsourcing in Romania

IT outsourcing in Ukraine