Who are the best React Native experts? Who to follow? Where to find them? Well, we did that research, so you don’t have to!

React Native is usually our first mobile app technology of choice. This amazing framework speeds up the software development process and gives a deep level of control over the mobile projects. No wonder that tech all-stars like Facebook, Airbnb, or Uber use React Native in their mobile applications.

React Native also means a great, collaborative community of developers from all around the world. We scanned through the blogging platforms and social media sites and created a list of the best React Native experts & blogs.

If you want to stay at the top of your React Native game, check out the following links!

This blog is a must-visit for all the React Native developers. With frequent updates and plenty of contributors, it’s a great place to be up-to-date with React Native.

Check it out and visit every once in a while so you won’t miss a thing! 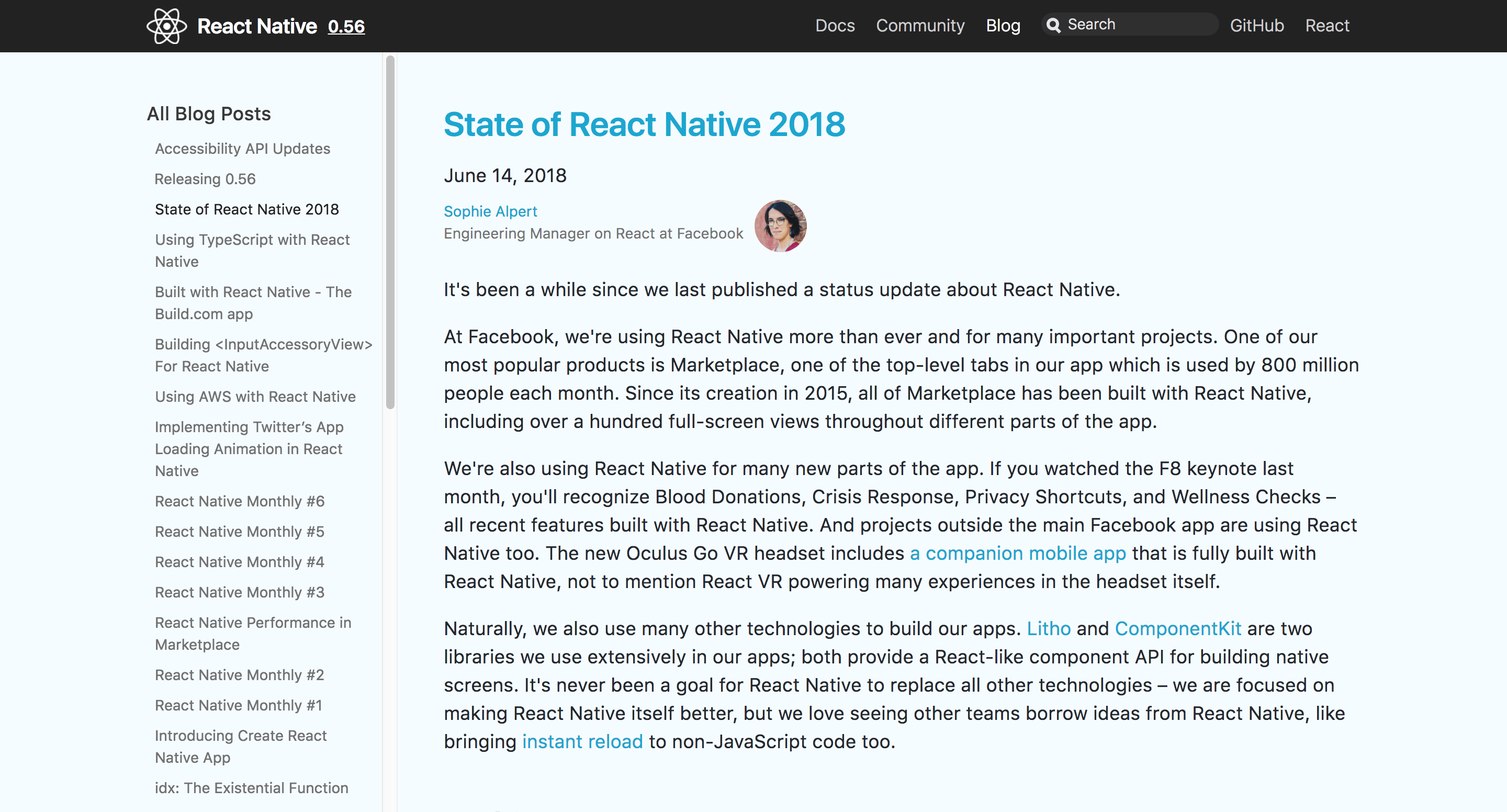 Mike Grabowski is one of the best React Native experts out there. He is a member of a React Native core team and he’s extremely active in the React Native community.  Mike frequently writes and speaks about this framework and contributes to various projects. Mike is also an organizer of React Native EU, the first conference in Europe dedicated solely to React Native. 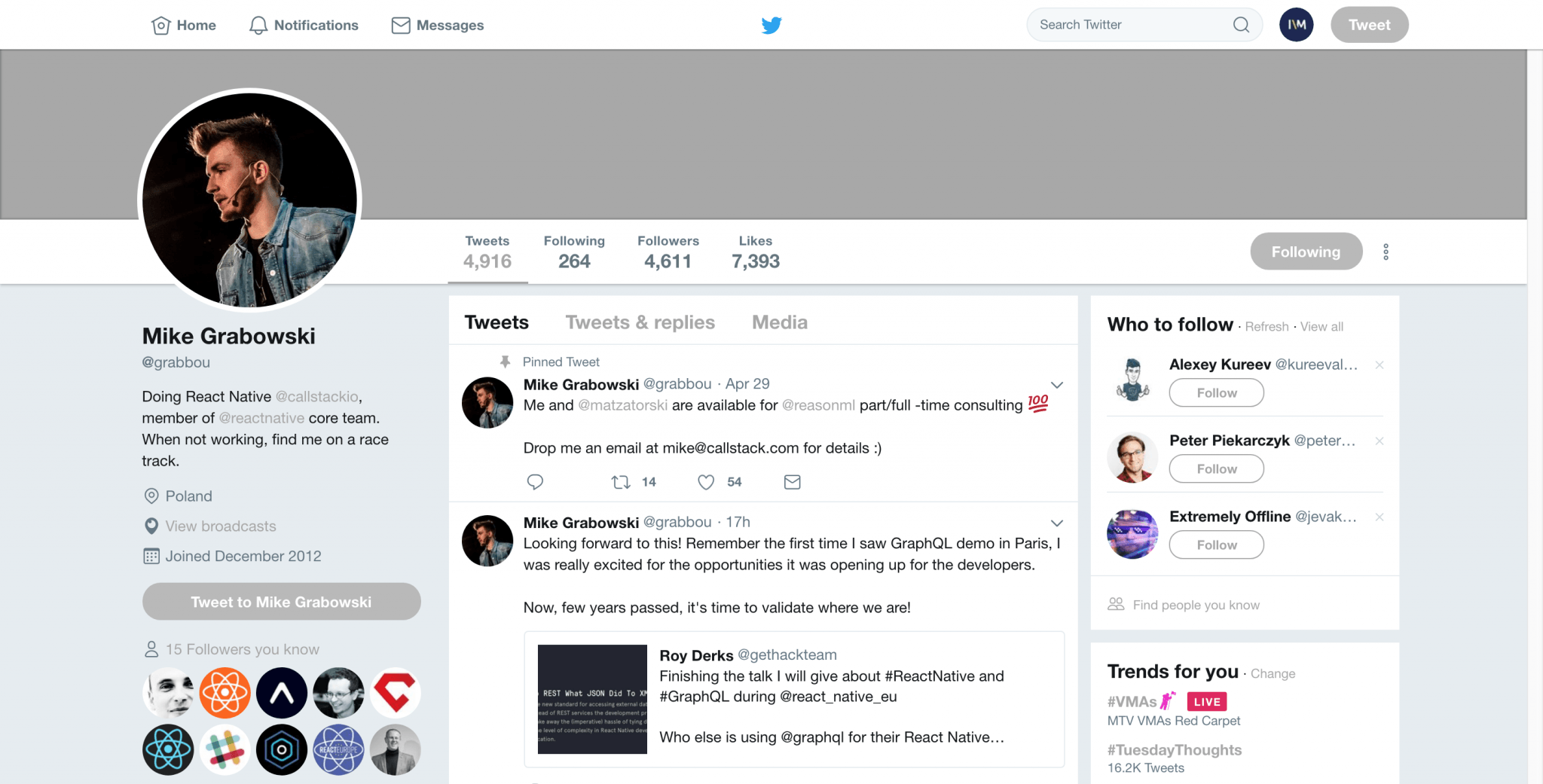 The best source of information in terms of updates and new releases. Make sure to follow and stay updated! 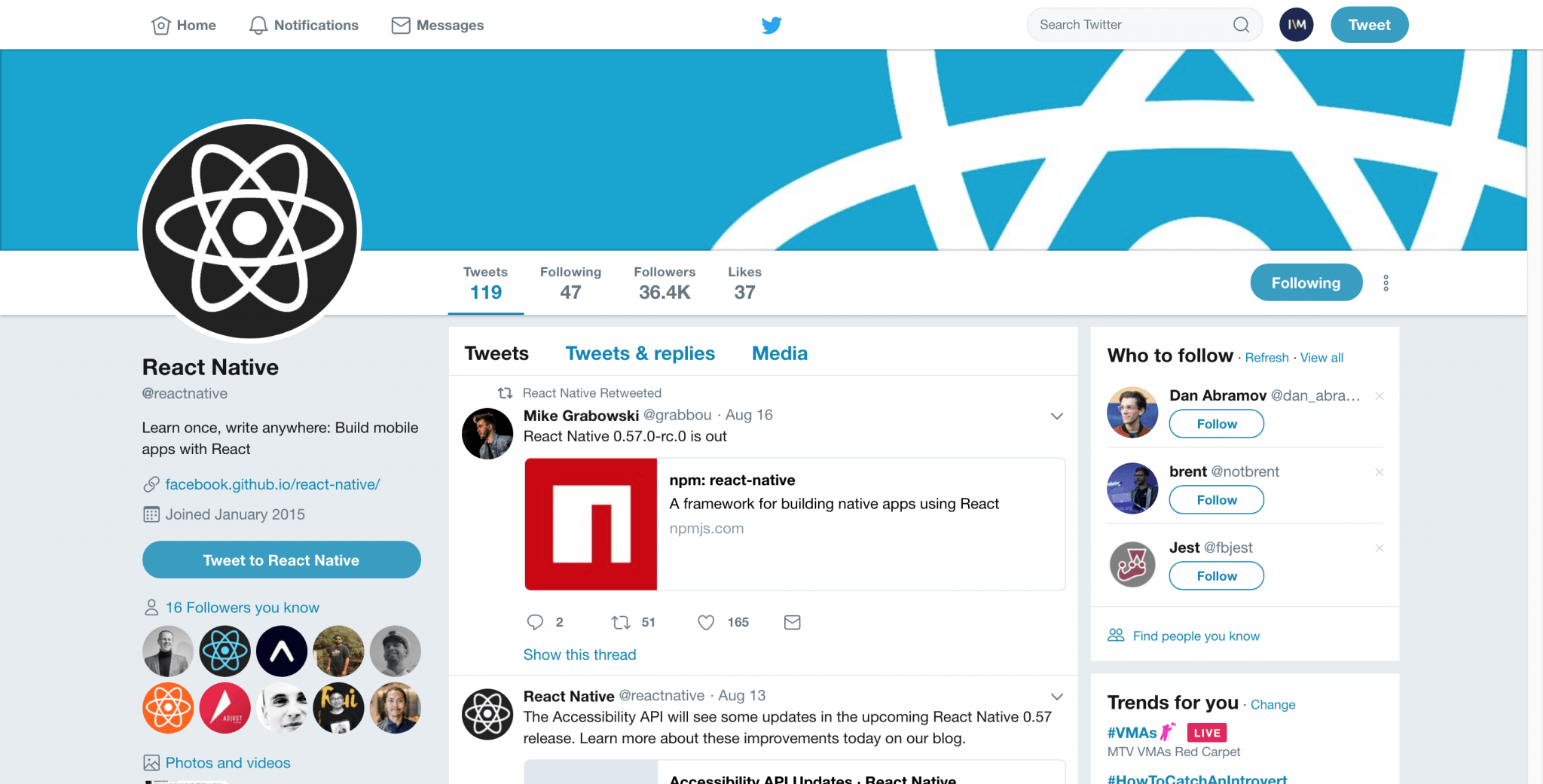 Ray Wenderlich is a well-known persona in the software development community. With his team of over 100 software developers and editors, he provides thousands of high-quality resources for coders. If you are looking to boost your programming skills – you may have found the place to do so.

The platform is an amazing source of knowledge on developing apps. They also cover React Native providing tutorials like this one from Christine Abernathy from Facebook.

Ray himself stays active on Twitter and it’s worth following him, not only because of React Native-related content. 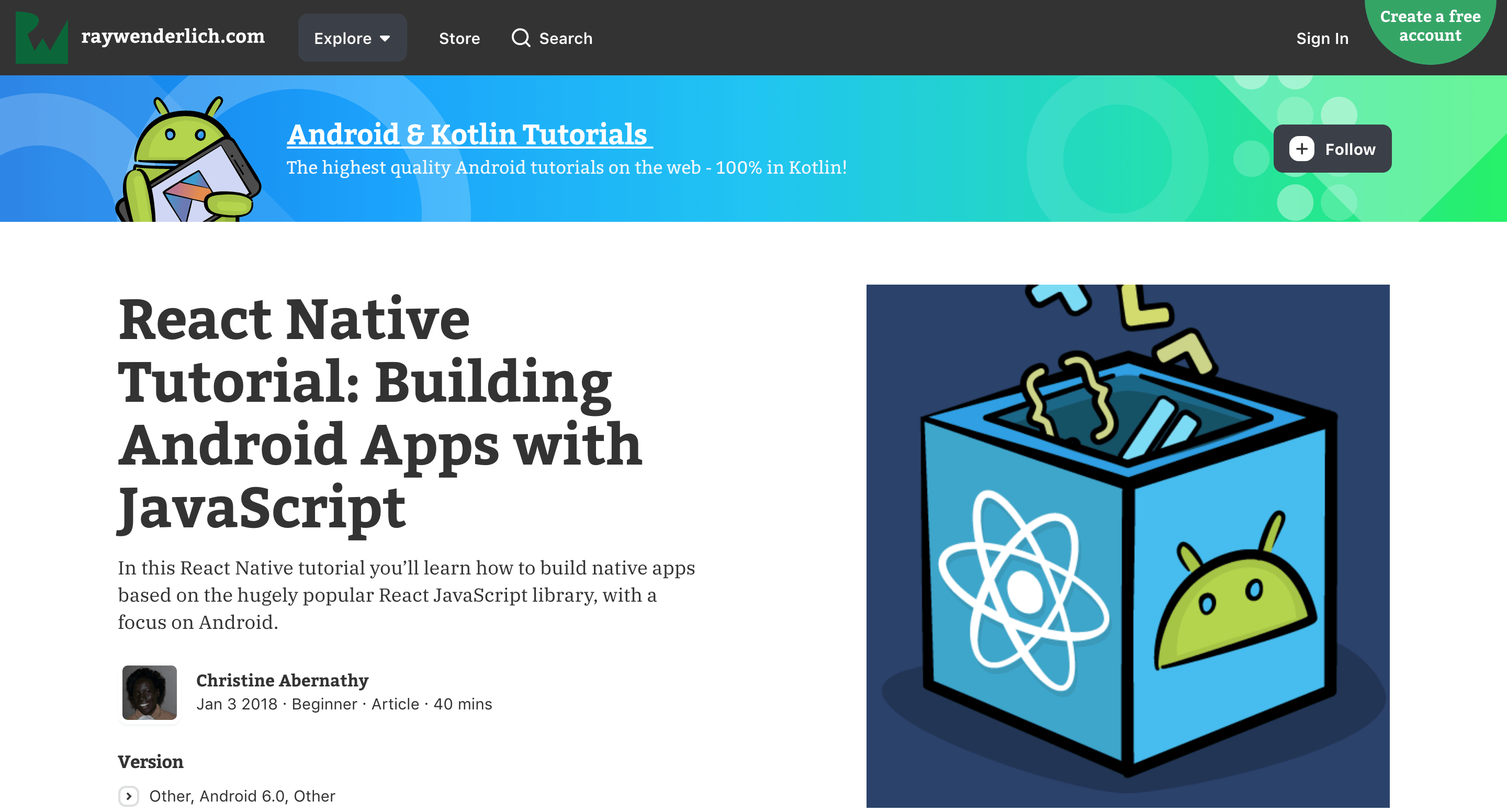 A real treat for those who would rather listen than read. Nader Dabit is a creator and host of React Native Radio on Devchat.tv, a weekly podcast about React Native. Nader recorded around 180 episodes so far and does not intend to stop. Every episode features different guest, usually a representative of a startup, software development company or big tech corporation. What do they have in common? They are all top React Native experts! 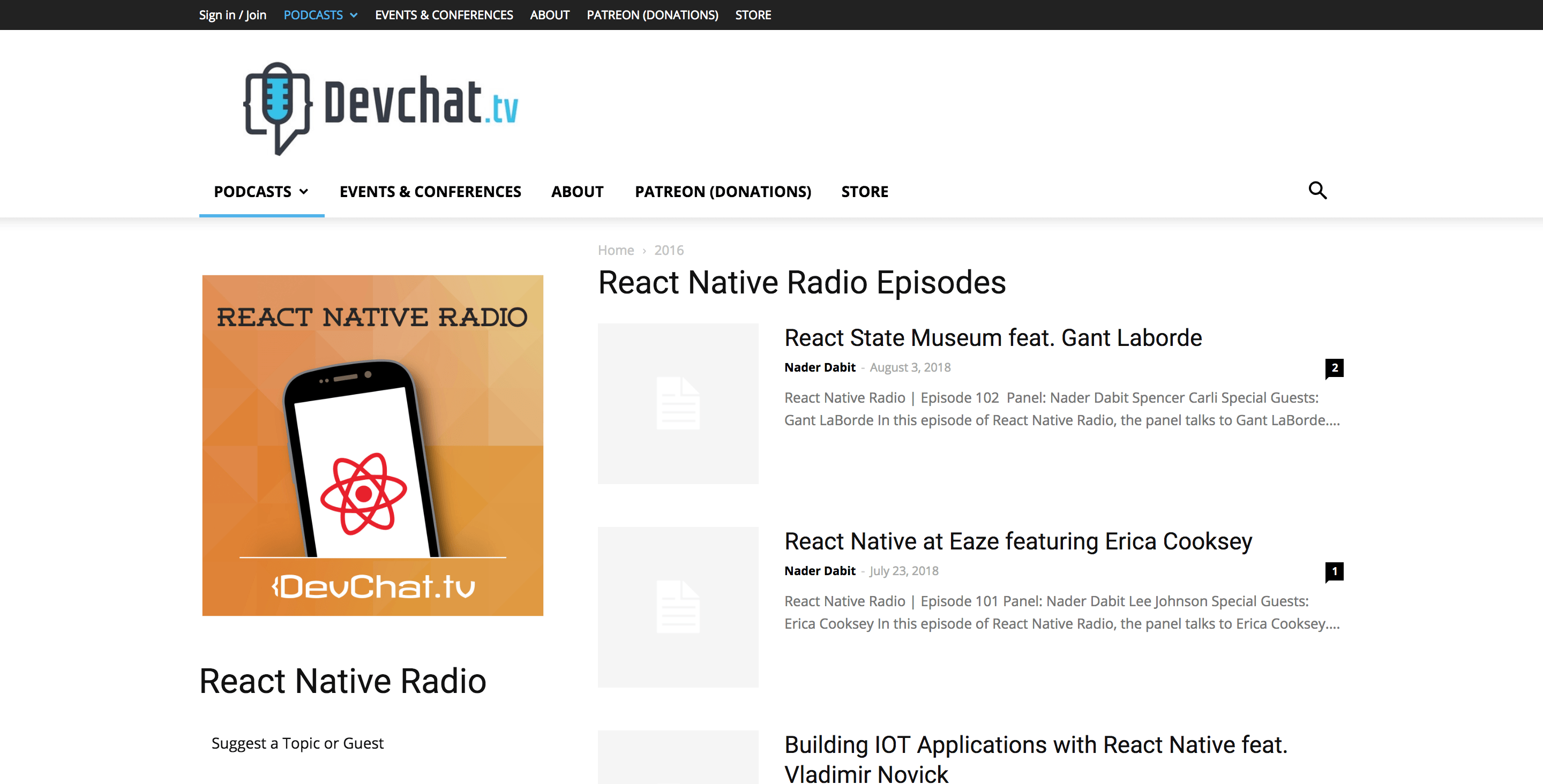 React Native Coach is a stream of React Native-related articles on Medium. Curated by Wyatt McBain it contains plenty of interesting articles submitted by various React Native experts. For reference, check out this piece about creating Facebook-like chat bubbles. 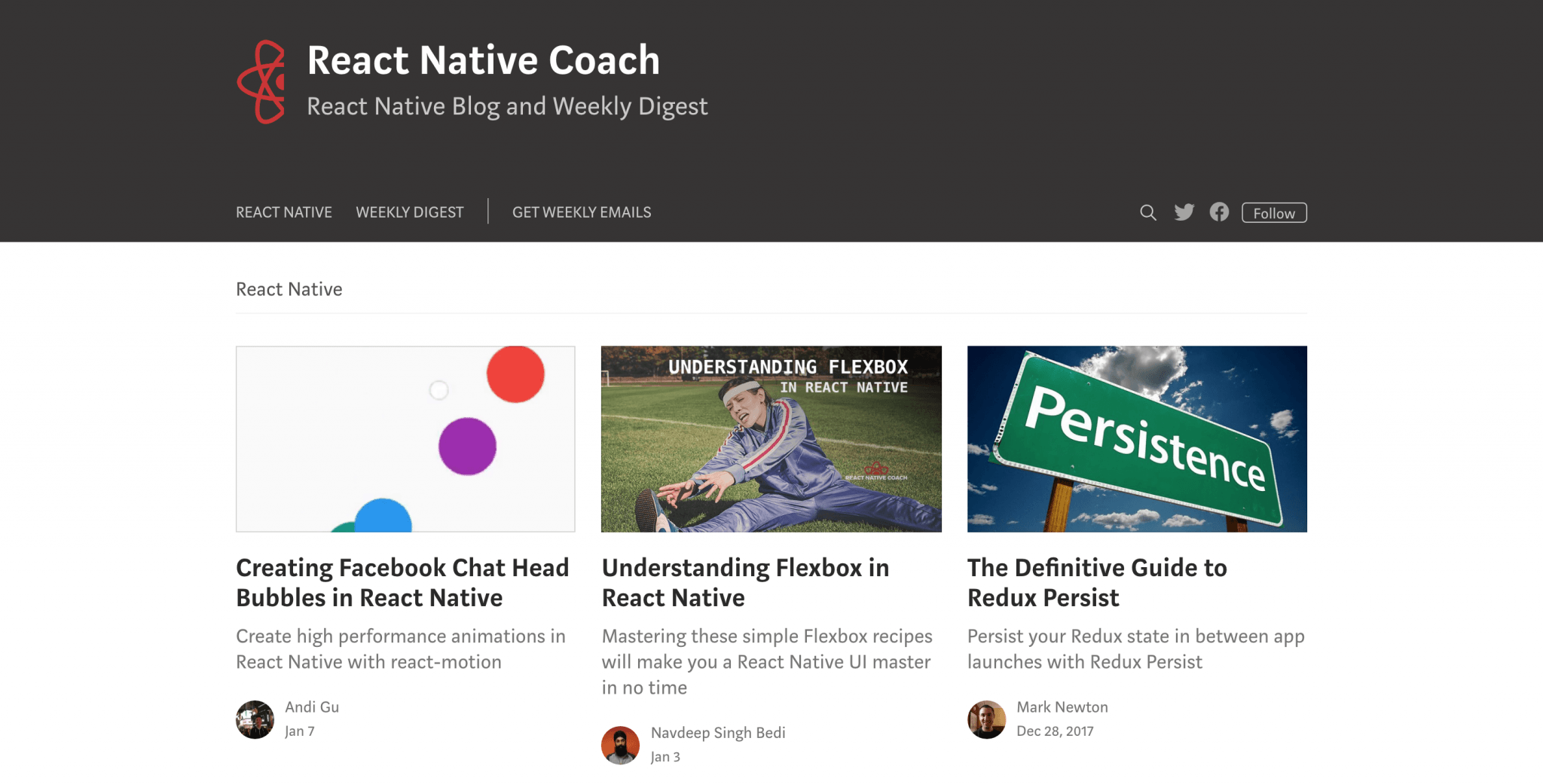 ReactDOM is a newsletter about React and React Native curated by Adeeb Rahman (to be followed on Twitter and Quora).

With over 100 issues, it’s a solid source of knowledge about both platforms.

ReactDOM is also worth noticing due to its pretty active newstream on Twitter. Remember to check it out! 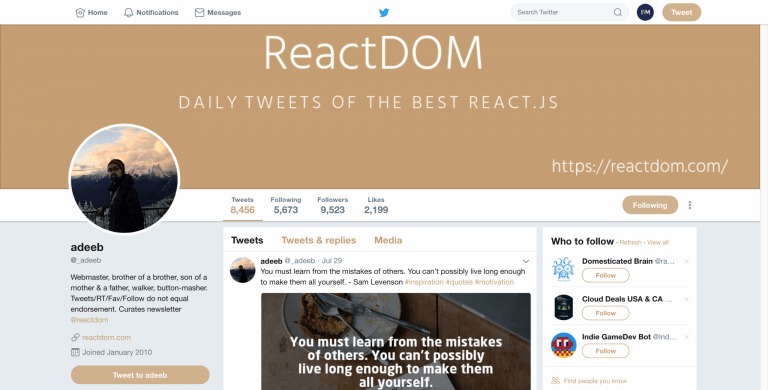 Devin Abbott is another React Native rockstar. This former Airbnb engineer is the founder of Deco Software, a React Native developer tools company. He is also an author of many parts of the official React Native documentation. Devin published plenty of useful resources for React and React Native. One of them is Fullstack React Native – an amazing guide to React Native in the form of an e-book. 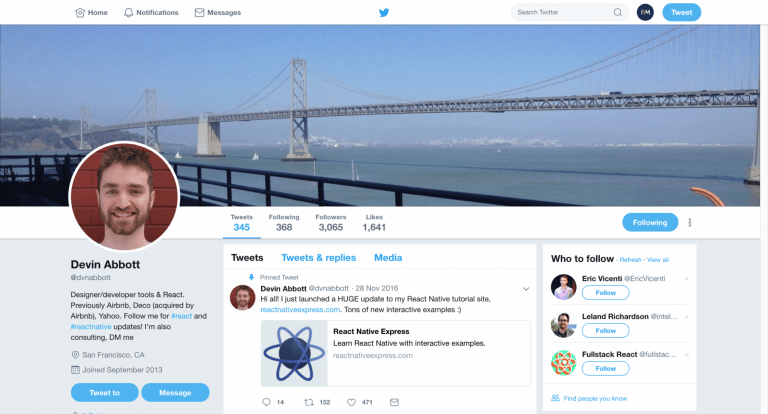 Dan Abramov “builds tools for humans” and is certainly someone worth following. With over 70K followers on Medium and 280K on Twitter, he is one of the most influential React Native experts out there. Dan has an amazing reputation for being really helpful among React Native community.

Dan is also a heavy user and a dedicated contributor on GitHub. Make sure to check out his profile and give him some credits for the enormous work he’s doing! 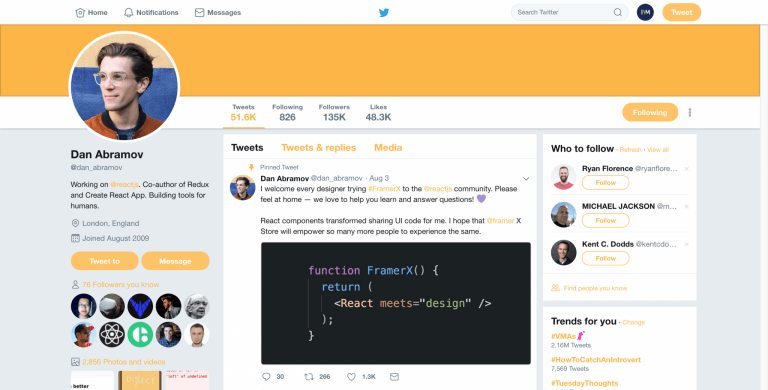 Christoph has written a number of good articles about React, React Native, and Redux. Although he doesn’t exclusively write about mobile app development, his blog is still worth visiting. 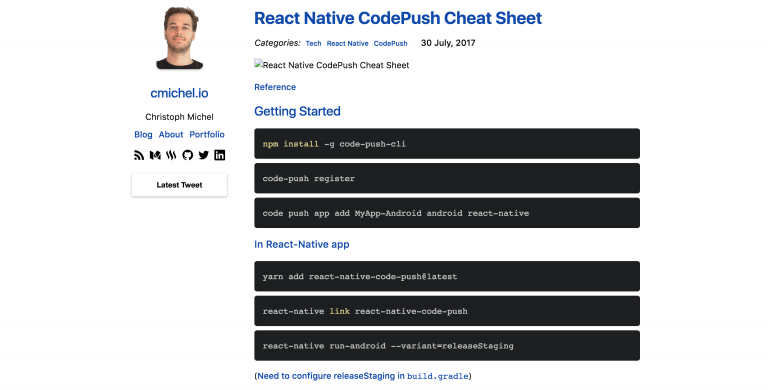 Gosha Arinich is a freelance software developer who blogs about web and mobile applications development. You can find all his React Native related entries here. But there’s plenty more. You’ll find some quality content about Ruby on Rails and React as well. 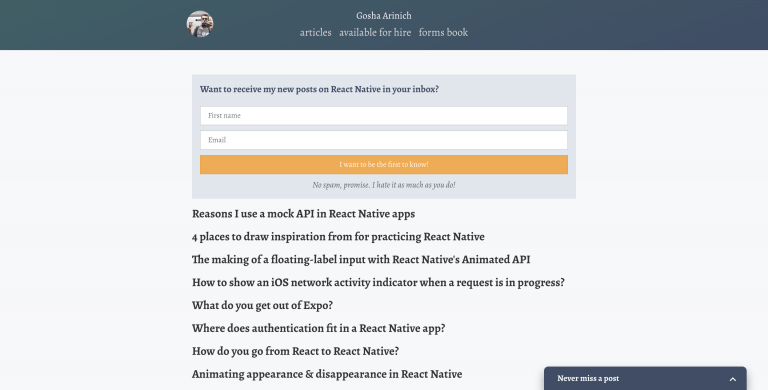 Maximillian is a co-founder of coding self-learning platform Academind. He is also an active teacher on Udemy, where he helps people in mastering React and other programming frameworks. He has almost 350K students on Udemy and owns a successful Youtube channel with more than 600K subscribers. 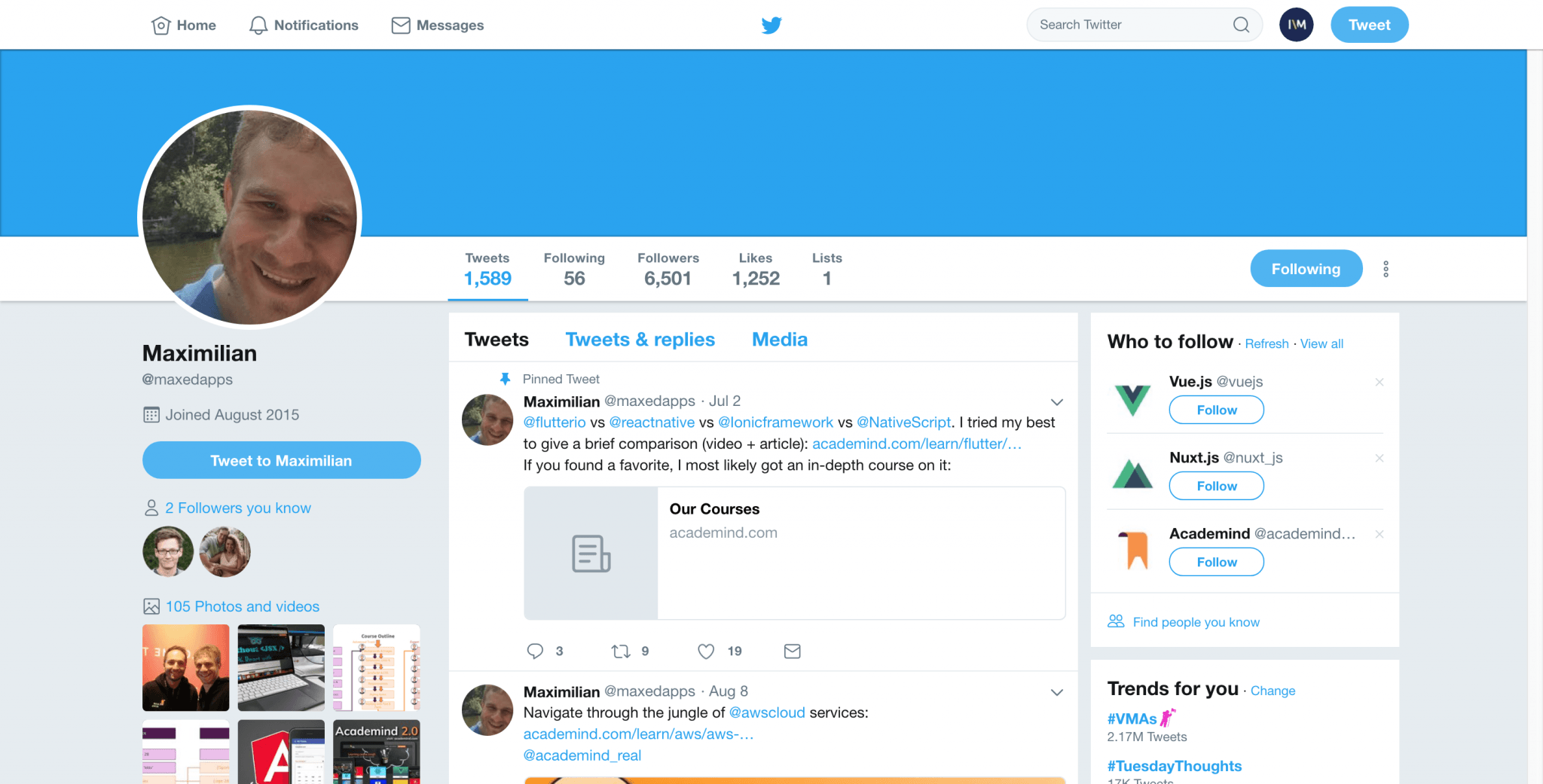 Stephen Grider is another Udemy teacher, authoring the highest rated course on React. He is also involved with the coding teaching platform RallyCoding, which blog is something also worth checking. 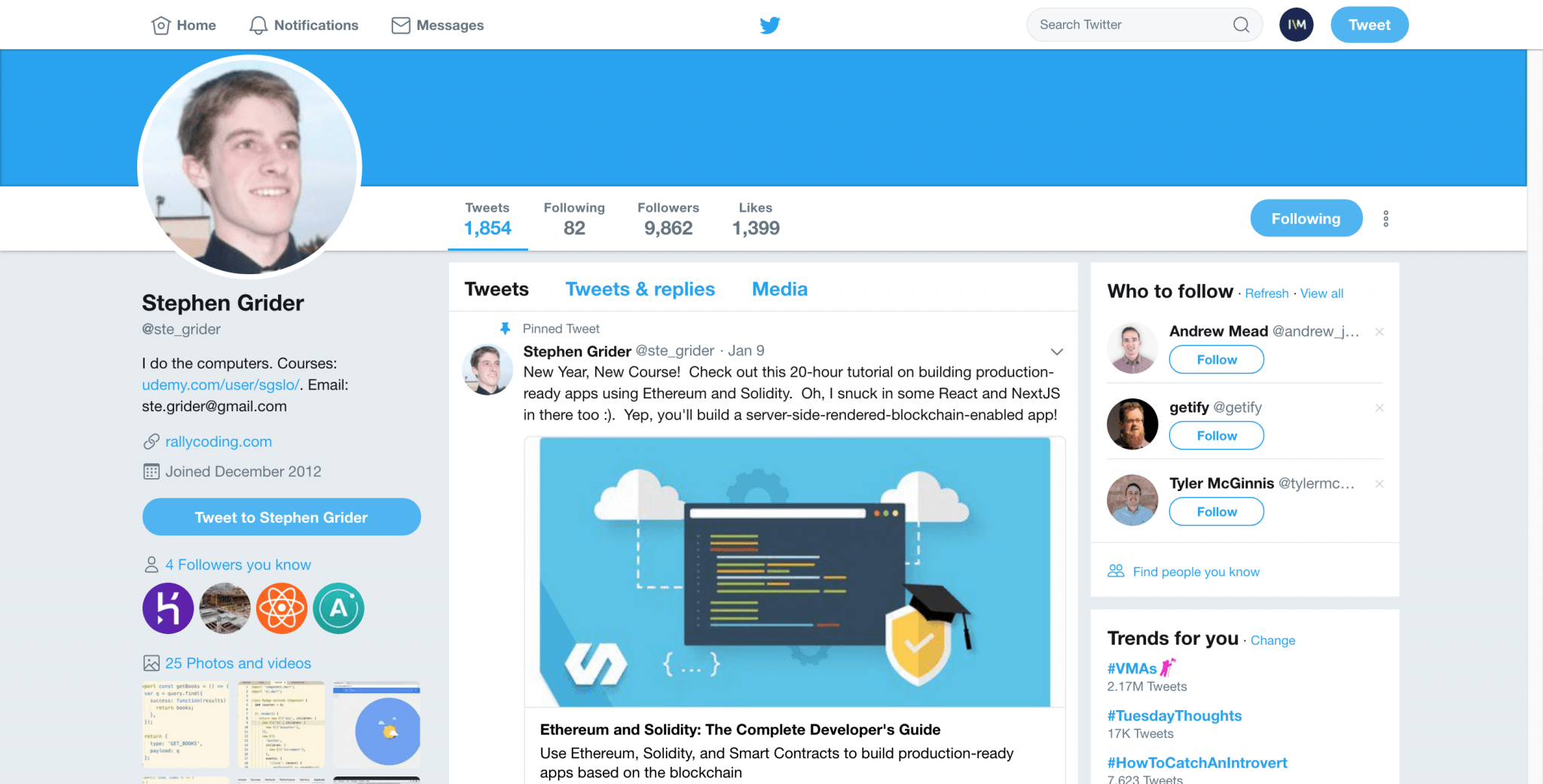 Everybody has their own thing. For Juho, it’s talking to people. His blog is full of talks with engineers and developers behind various React-related libraries.
Juho is also an active member of the React community. He is the award-winning founder of the SurviveJS and JSter as well as organizer of React Finland. 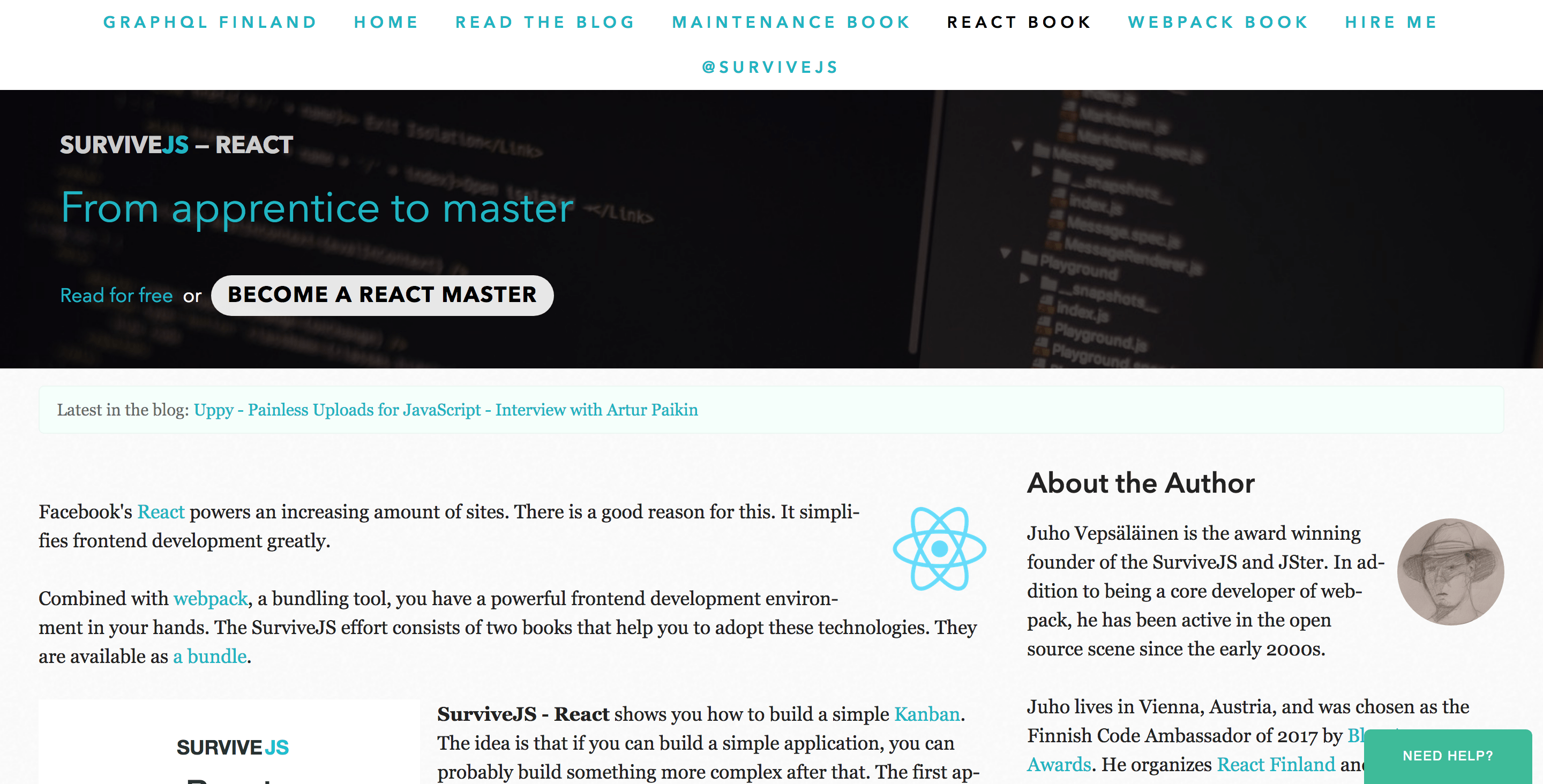 React Native Training is a Medium-based thread with stories and tutorials for developers interested in React Native. The list is curated by two React Native freaks who we have already mentioned, Mike Grabowski and Nader Dabit. Make sure to check it out once in a while! And, of course, you can follow this project on Twitter as well. 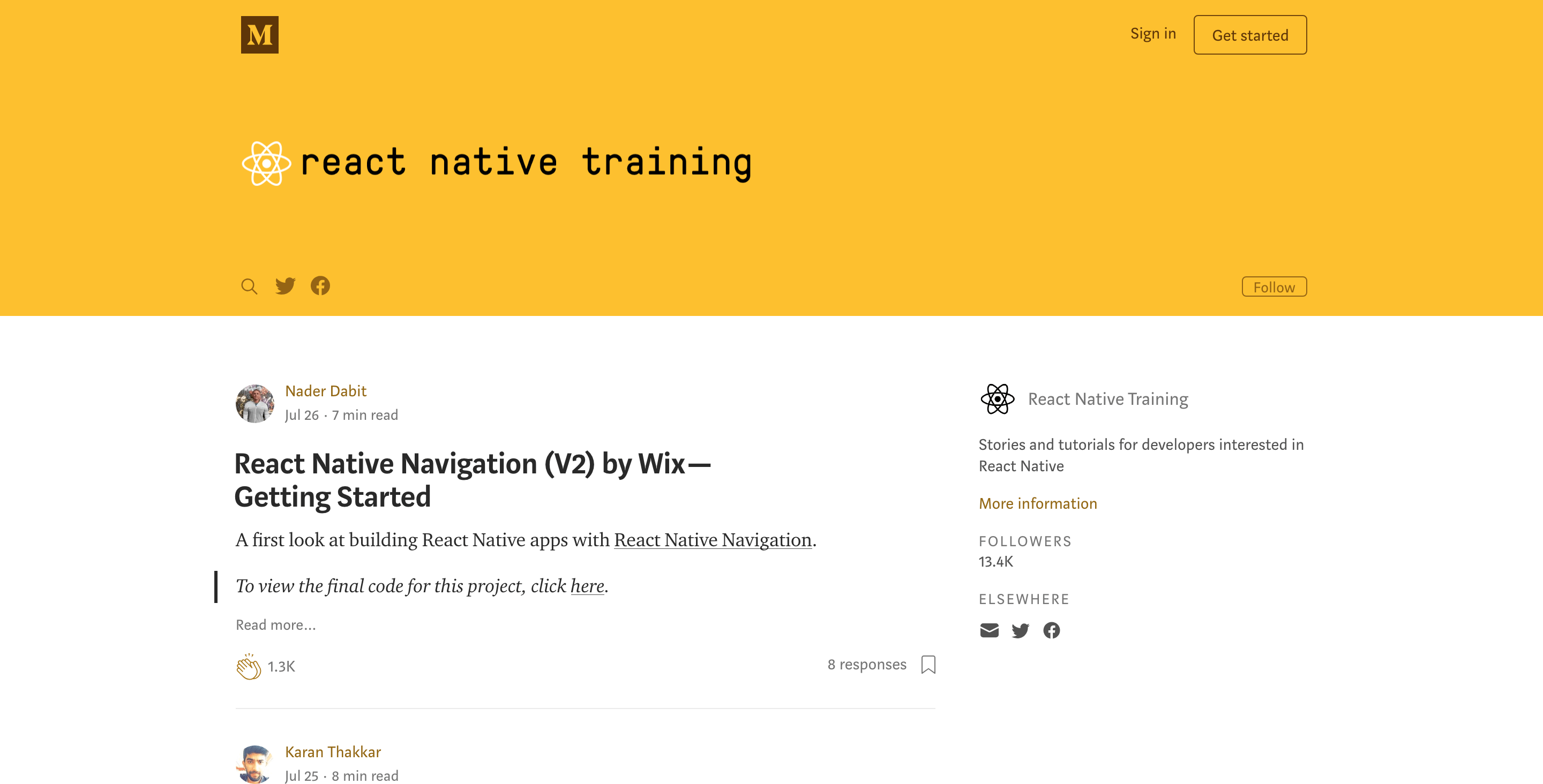 Karan Thakkar is a React Native developer at Skyscanner and trainer at Codebar. He is also an active open-source contributor with over 100 contributions on GitHub in 2020. 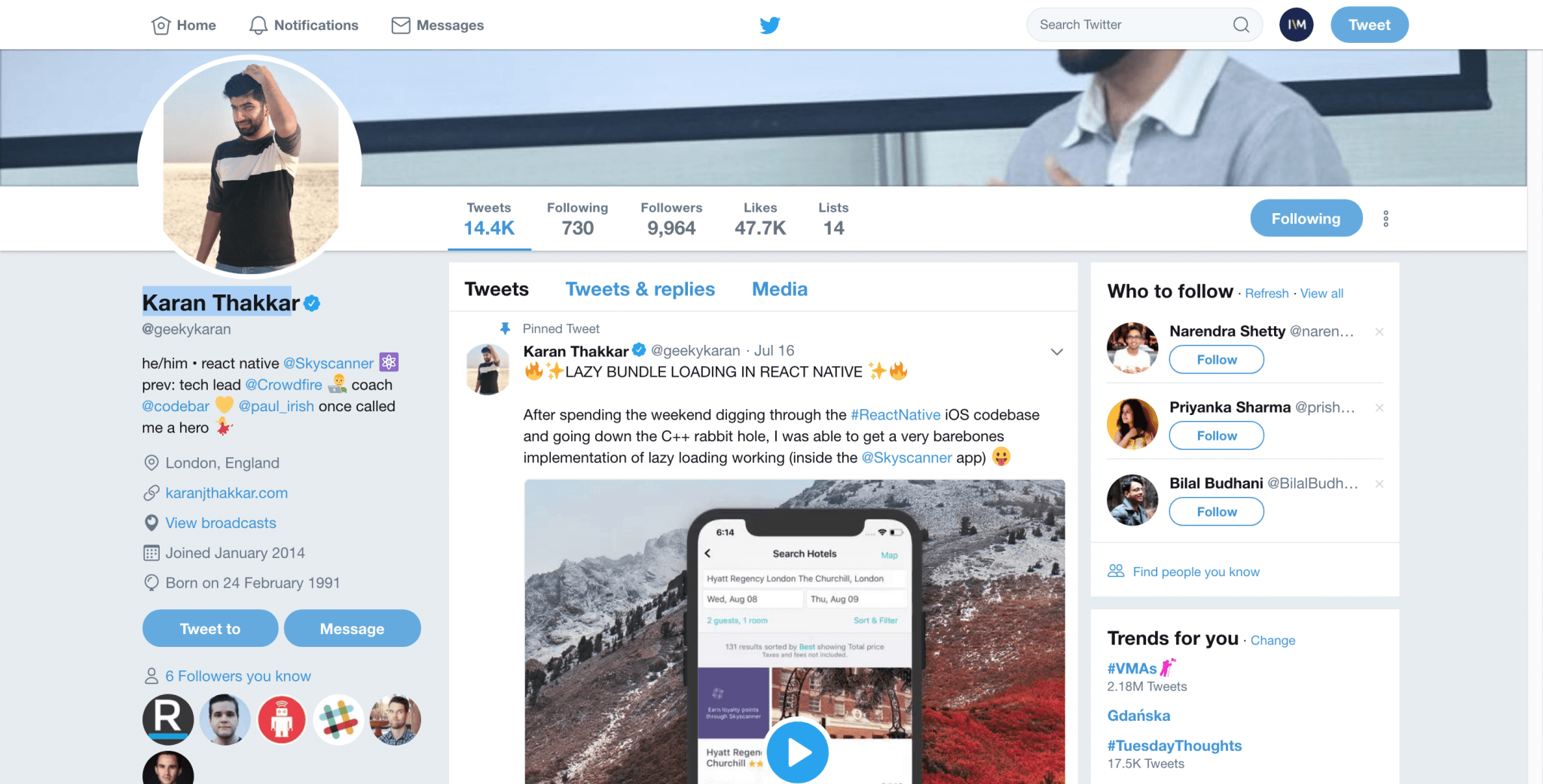 Alex Kureev is a front-end engineer at Facebook. He is the author of some React Native related publications on Medium and remains active on Twitter. 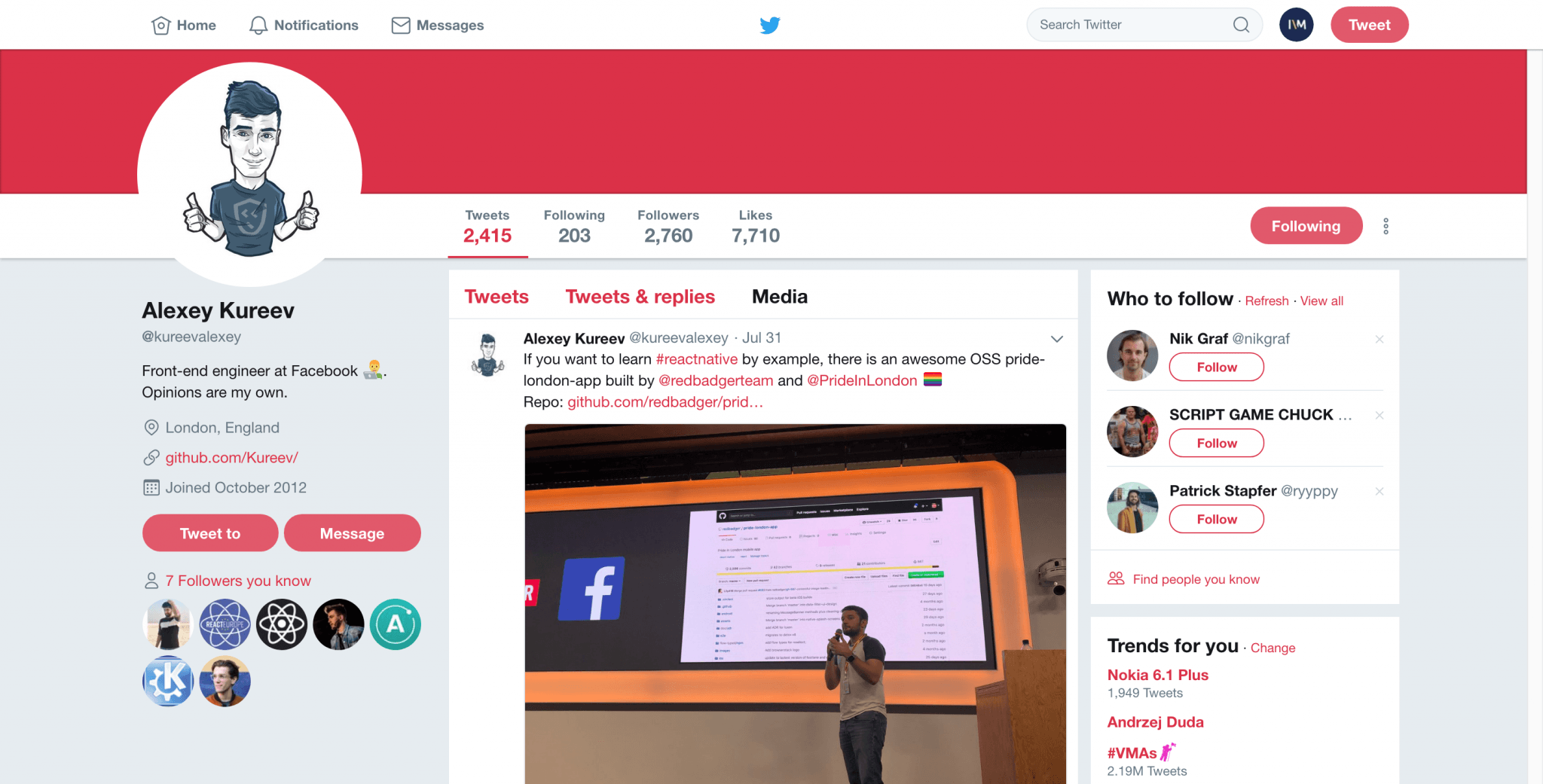 Ben’s blog and Twitter are great sources of knowledge for someone who wishes to take a career into their own hands. While he regularly issues great pieces on React, JavaScript and coding as a whole, he also gives great insights into how managing a team and managing one’s tasks work.

As a Software Engineering Manager himself, Ben fully understands the issues of a dev team and fills his blog and Twitter with lots of useful pieces of advice.

Being an ex-Mozilla developer and founder of Actual, James has a truly deep knowledge of cross-platform app development. He shares it with his followers on both Twitter as well as the great blog he brought back to life in 2019, after a two-year hiatus.

We recommend starting with the “Why React Native is different” speech James gave at a local JavaScript meetup in Richmond, VA, back in 2015. 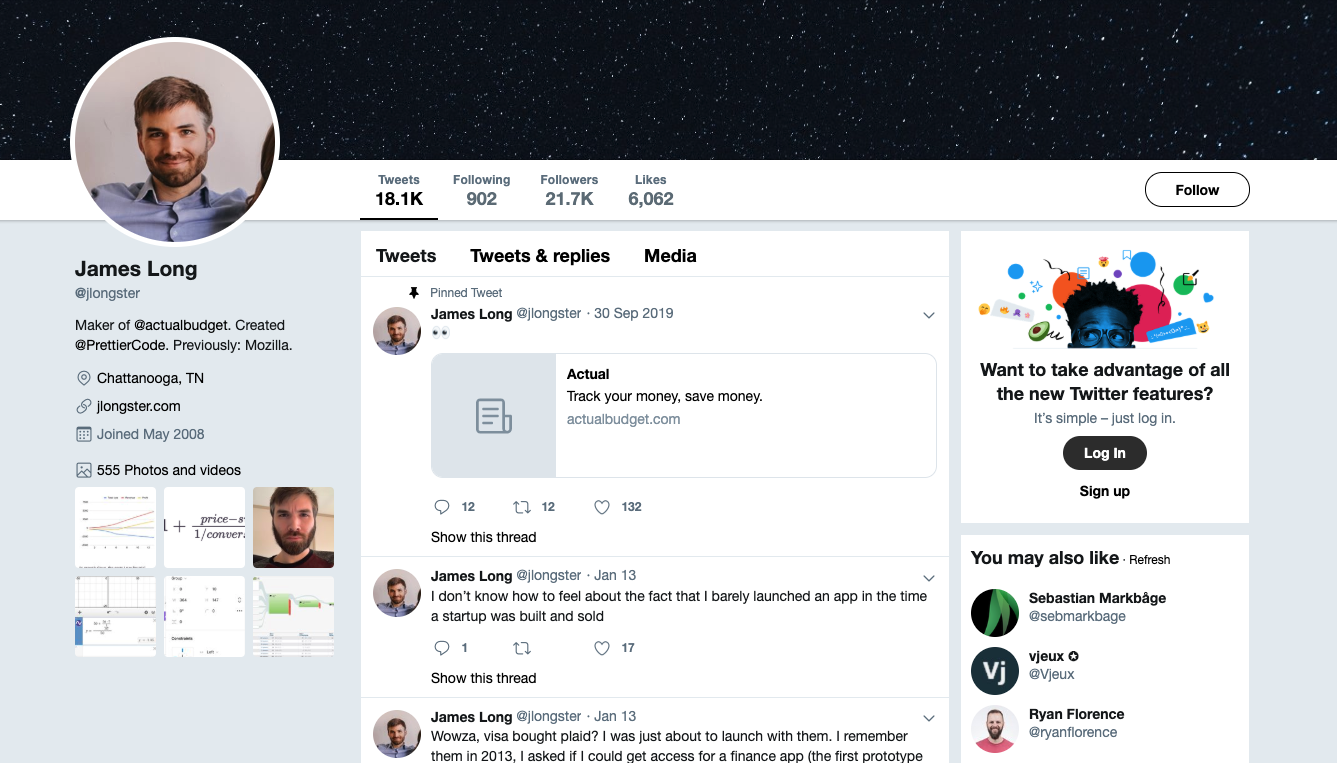 Another YouTube channel this time from official representatives of FB. This page would be useful for those searching for various conferences and tips in mobile app development.

Here is what their “about us” page says:

“Learn how to grow your apps with Facebook by watching our videos.”

So why not dedicate another evening watching Lin Clark - A Cartoon Intro to Fiber - React Conf 2017, F8 2019: Building the New Facebook.com with React, GraphQL and Relay or ⚡️ - Ken Wheeler - Using React for Anything but Website - React Conf 2017.

Find it painful searching for relevant posts and blogs on the web? Can’t stand following a bunch of new influencers daily? Take advantage of Made with React.

This is a website-aggregator which collects websites and applications using the React or React Native JavaScript library.

Since June 2016 the authors of the portal make users entertained with their articles. On average the frequency is 1 post per quarter.

There are also profiles on FB, Twitter and GitHub. 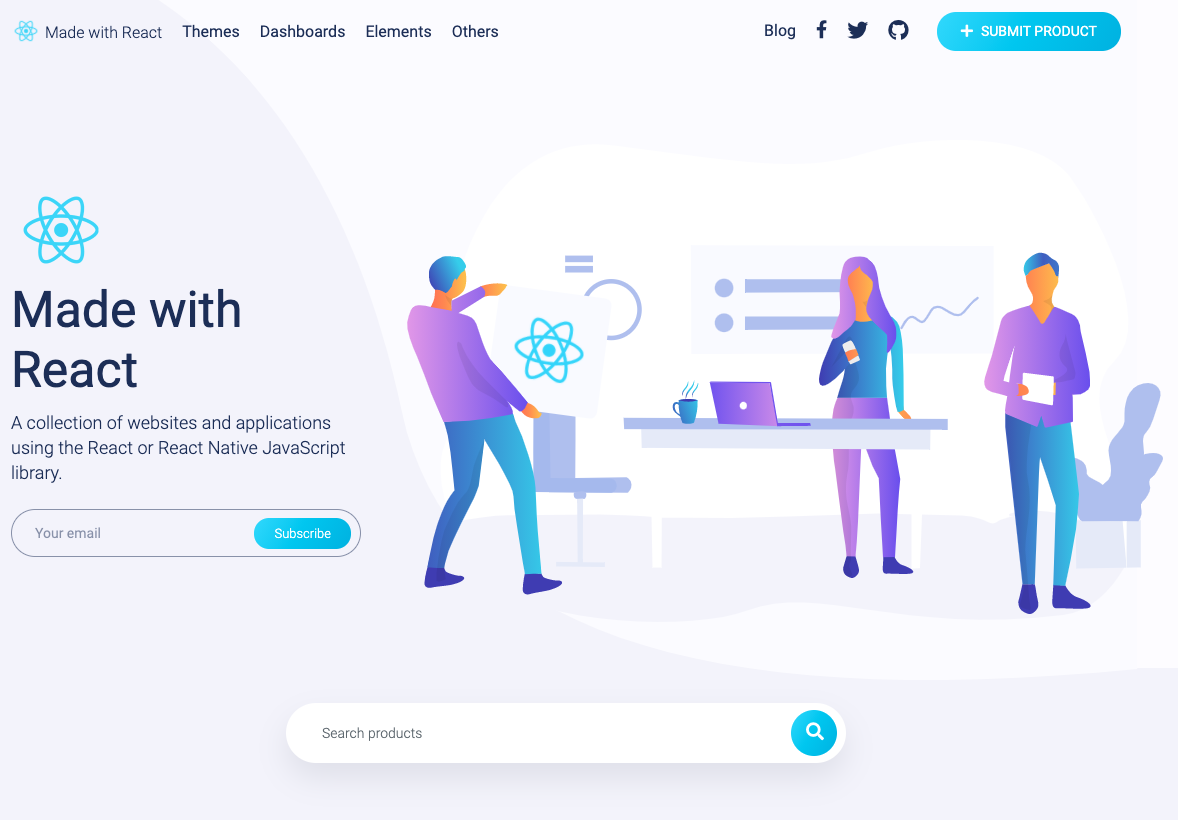 This is Dan Abramov's personal blog. As we mentioned earlier, he is the creator of Redux and a core member of the React team. Dan probably has the most intimate knowledge of how React works and can communicate it clearly to the outside world. 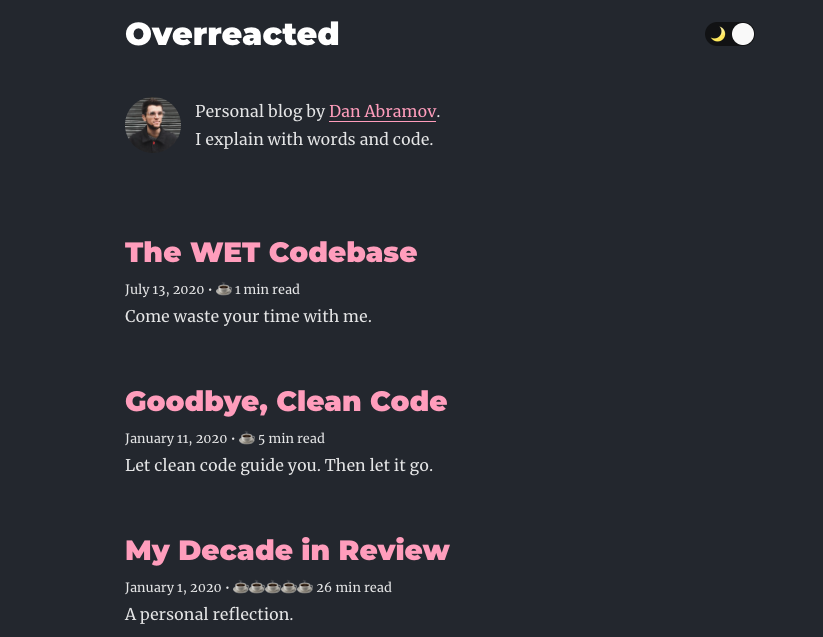 This is another popular site that hosts many tutorials and articles on web and mobile development. They have a pretty nice layout with clean and readable code samples. 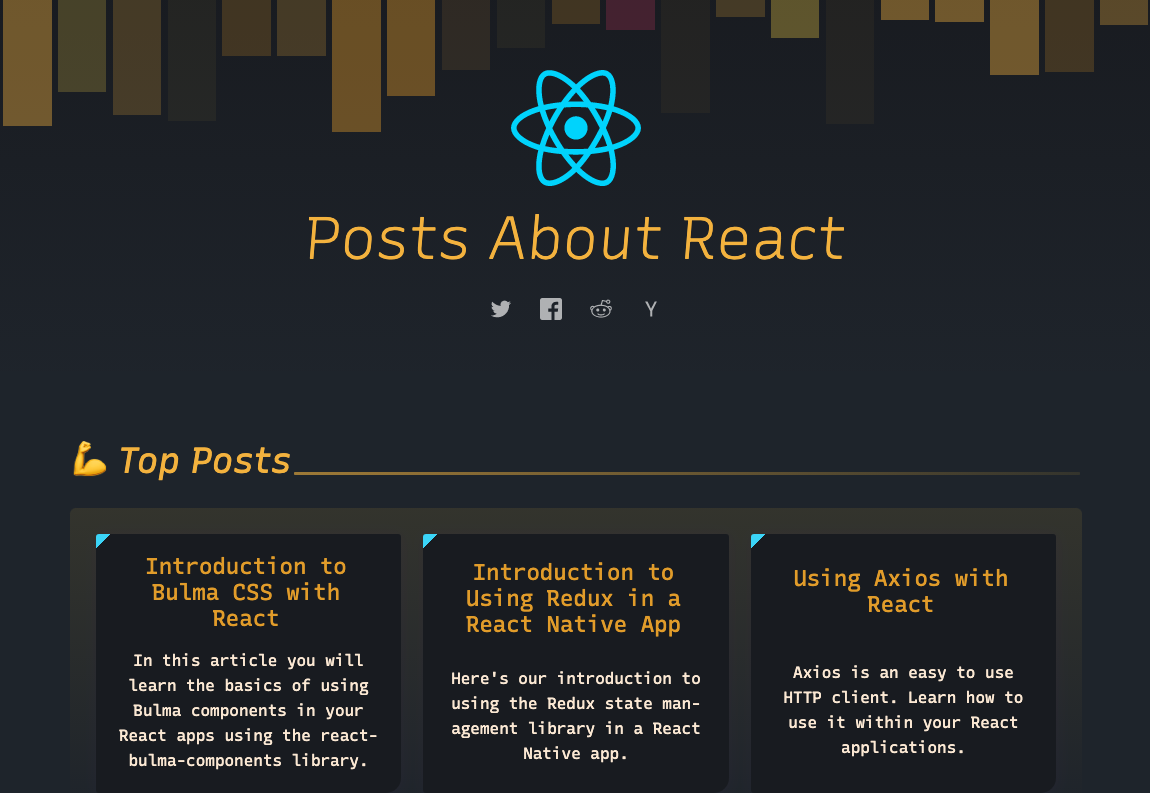 Robin is an independent consultant in the field of software whose goal is to provide high quality tutorials and fairly in-depth articles. 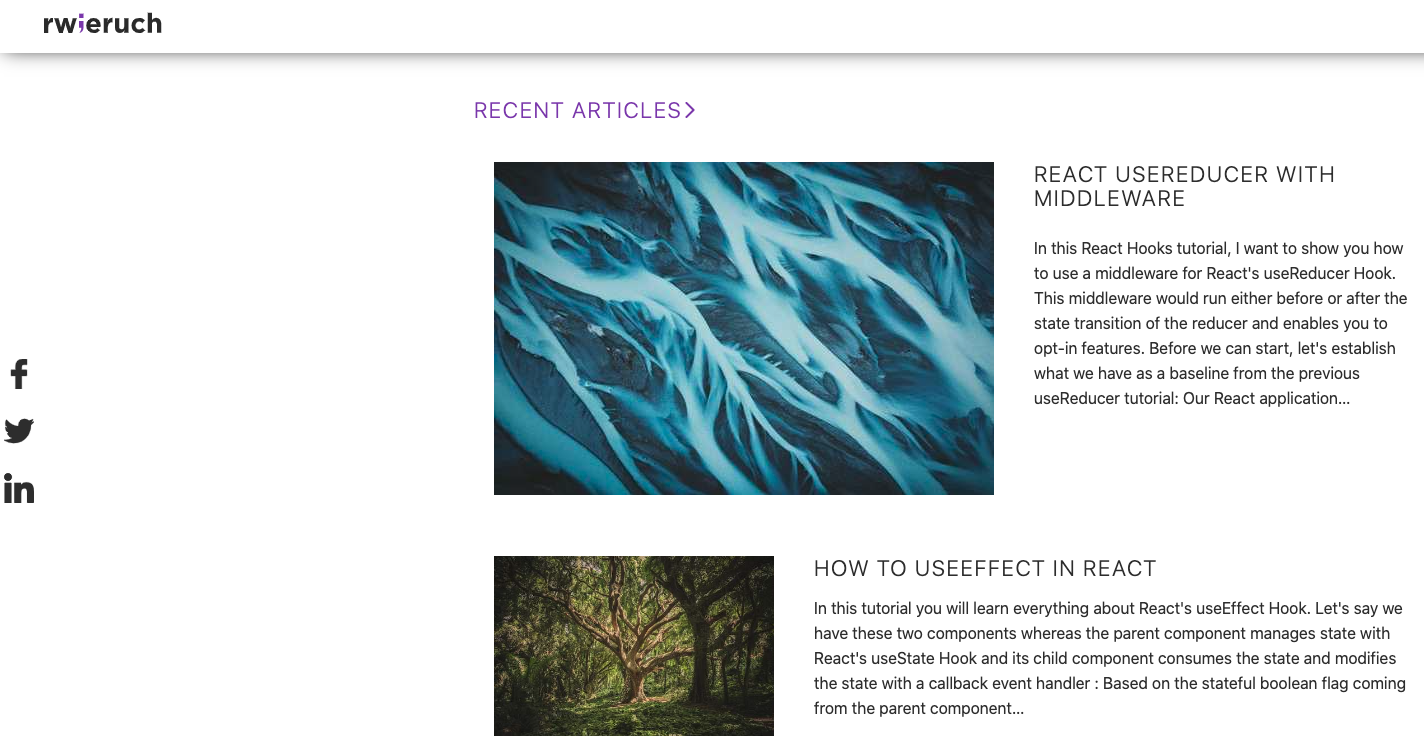 This blog is the most authoritative website to learn about new React features. If something is baked in the oven, then it will definitely be published here. Check out some great stuff. 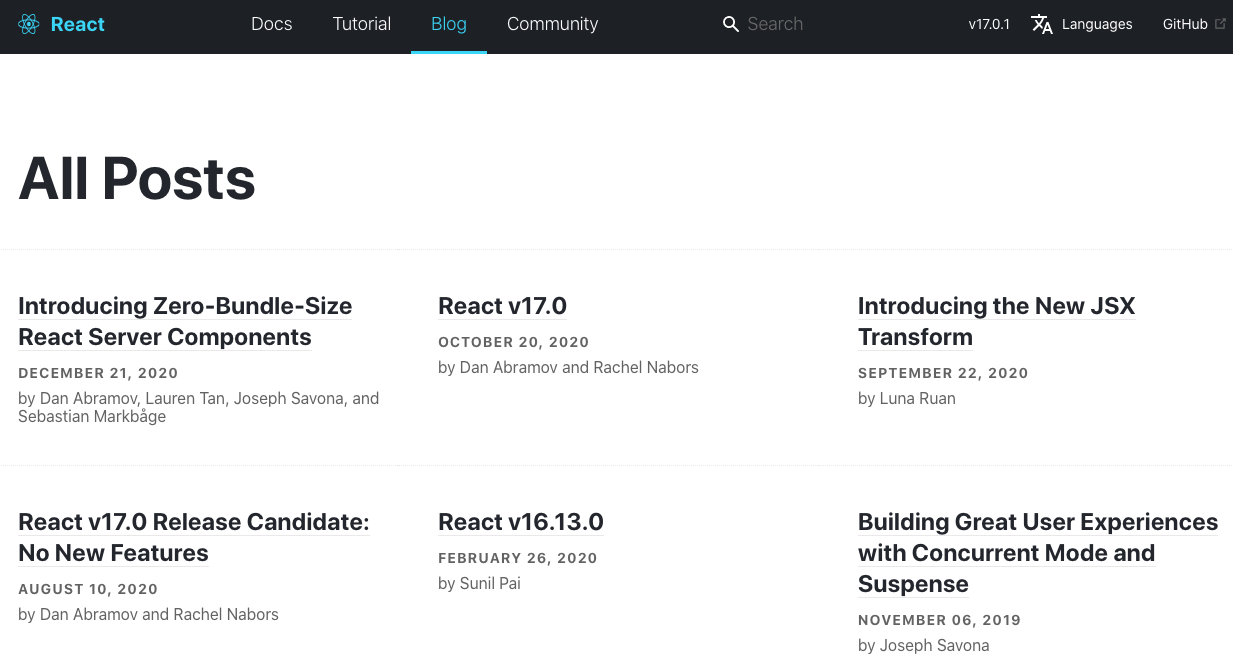 Awesome React Native is a platform that stores links to useful React Native tools, libraries, tutorials, and articles. It does not contain actual articles or guides, but links visitors to the websites they reside on. 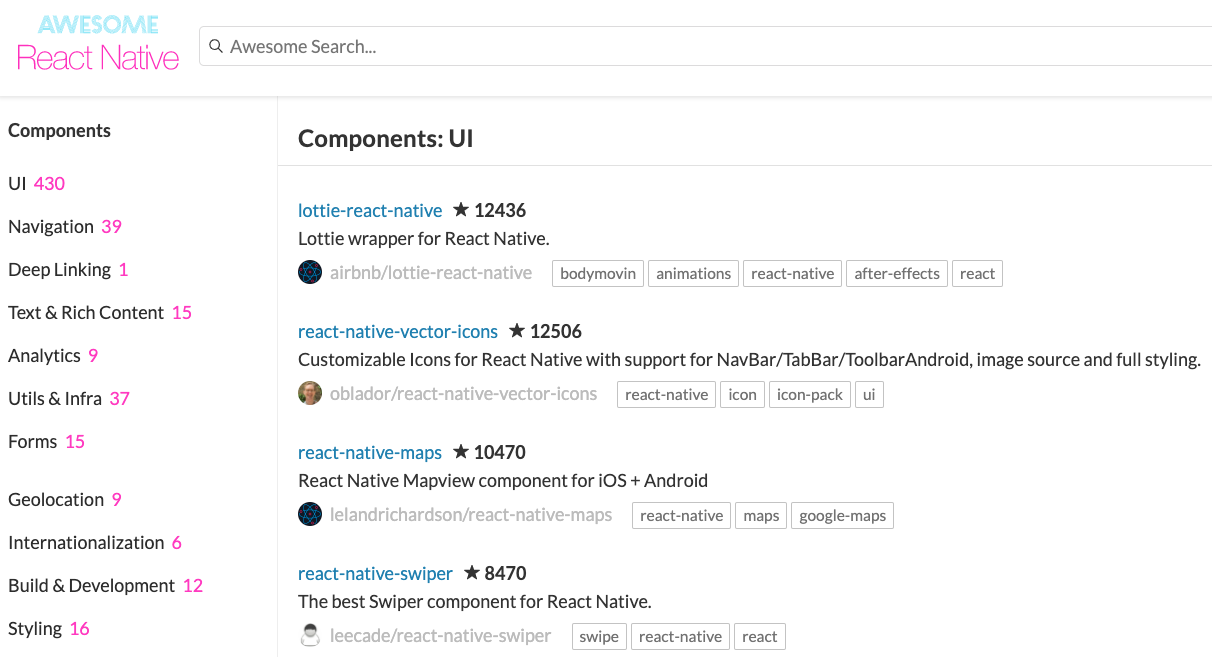 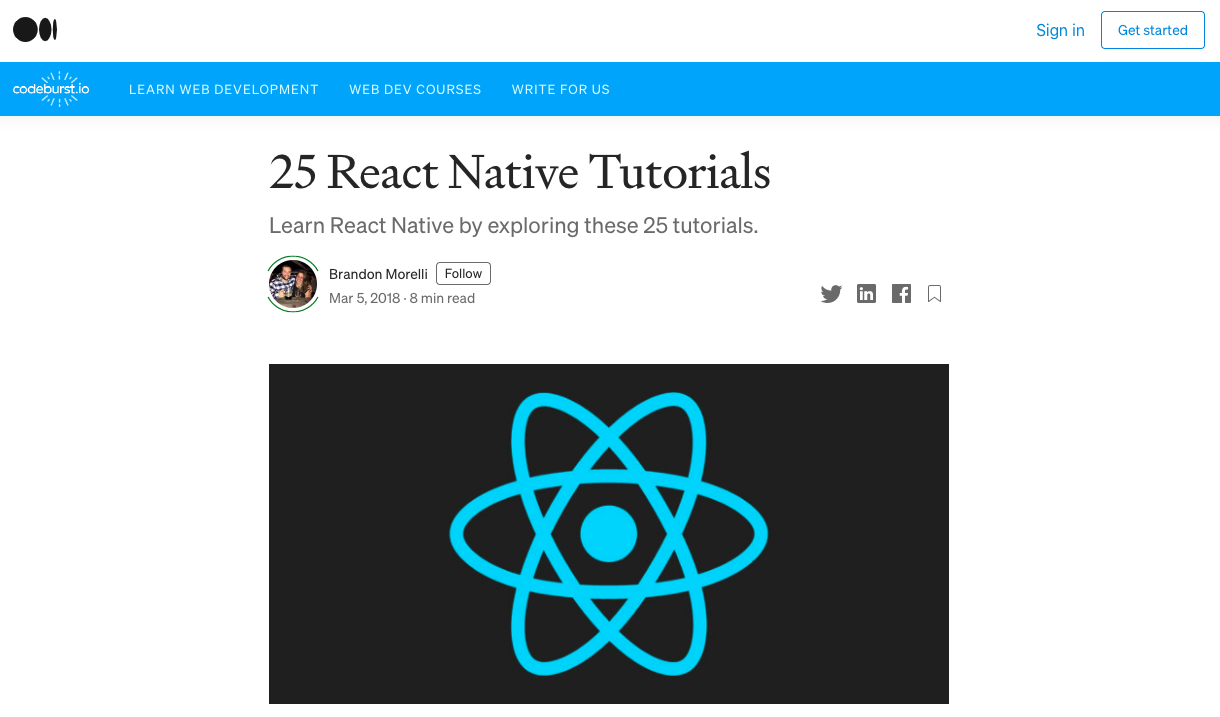 This is a carefully curated and fun newsletter to read about everything React Native is about. Every two months a free summary of news, articles, issues, pull requests, libraries and React Native apps is published and sent to registered emails. The newsletter is curated by Frank von Hoven, React Native Developer at Infinite Red. To register an email, you must visit the website. 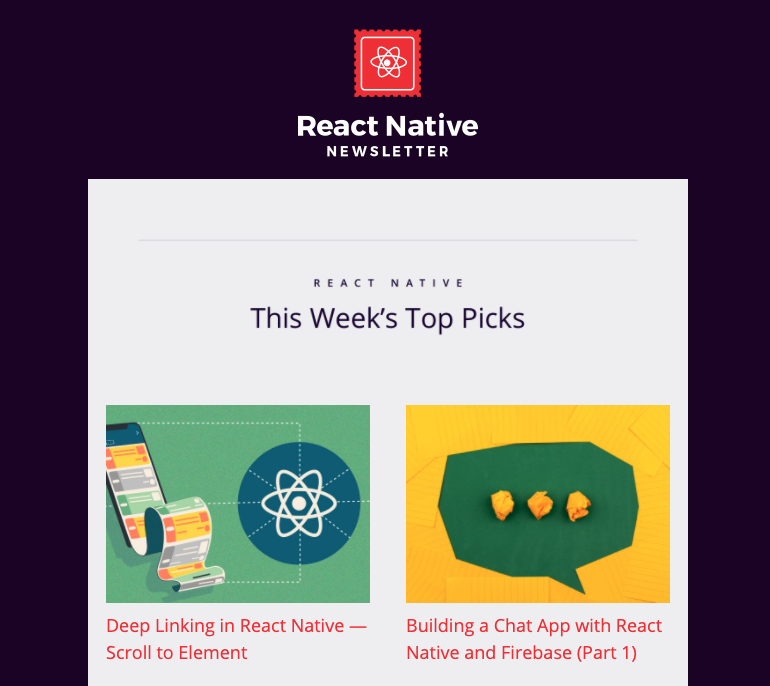 React Native Log is also a medium-based blog that hosts content from articles, tutorials, code snippets, and React Native tips and tricks. They have a team of 20 writers who post content for this blog.

One of the contributors is the one you already ran into above - Nader Dabit, who hosts a React Native podcast called React Native Radio, and co-leads React Native Training with Mike Gabrowski. Blog editor - Sharat Prabhal.

Ideamotive also runs its own blog with a huge part of it dedicated to React and React Native! We write for both developers and project managers, giving the perfect overview of the framework to everyone who wishes to learn more about it.

You can learn even more by following us on Twitter or LinkedIn.

Do you know some other amazing React Native experts who we didn’t mention?

Tell us about them, we’d be happy to expand the list!

The all-in-one guide for CEOs and Product Owners

What Are The Best Frontend Frameworks To Use In 2021?

The Hottest Silicon Valley Industries And Startups To Follow In 2021