We use technical and analytics cookies to ensure that we give you the best experience on our website. You can learn more about it in the Privacy Policy page.
Accept & close
Looking for top Python developers? They are just a few clicks away.
Hire Python Developers 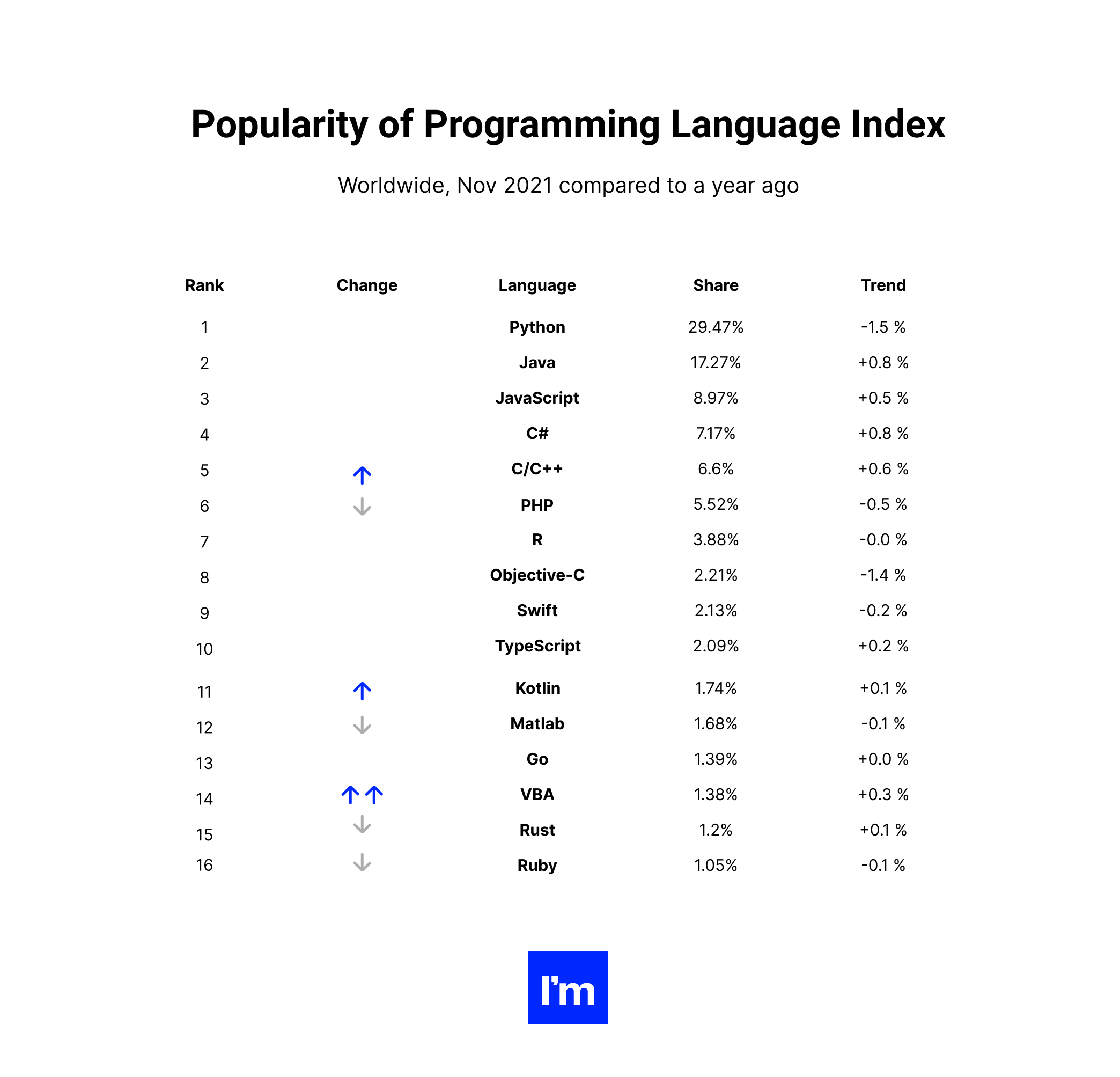 Many developers prefer it because it is not difficult to learn, and it has a syntax that is consistent and simple to read.  Since it has immense libraries and flexible structures, many developers love to use Python for AI, among other applications. And when Guido van Rossum was laying the foundation for python back in the 1980s, he made sure that the language was flexible, efficient, and more reliable as compared to other programming languages.

Over time, the Python community has grown immensely. It is now full of great people who are whipping up fresh and mind-blowing developments to the programming industry. The majority of these Python experts have a strong social media presence and are willing to share their knowledge and experiences far and wide.

If you are a programming enthusiast and you need to know more about trends in the Python industry we have prepared a list of the best Python blogs and experts to follow.

Jen Walraven is the Data Science and Engineering manager at Netflix. She posts regularly on opportunities, upcoming events, and new developments and updates. Jen is the real deal! She is an inspiration and is a regular guest at women's conferences, encouraging them to take a keen interest in tech.

If you’re looking to learn the intricacies of Python, this is the guy to follow.

David is an independent computer scientist with more than 35 years of experience. He has created several software packages for the Python community. He wrote the popular book Python Essential Reference in 2009, and the Python Cookbook in 2013. Currently, he is focusing on Python teaching and you can find information on his courses at Dabeaz Courses.

Raymond Hettinger is an expert programmer with vast experience in cloud computing and optimization. He is the chief trainer at Mutable Minds, a Python consulting and training company. Raymond has been developing Python for 17 years now and is a holder of the PSF Distinguished Service Award. His great depth of knowledge in the areas of software engineering and machine learning is impressive. What sets him apart is his ability to communicate complex ideas in a simple, easy-to-understand manner. He is one of those few Python experts with a funny bone to keep you tickled as you learn from him.

Ken Reitz is the creator of the popular Python tools: Pipenv, Requests, Pep8.org, and many others. Ken is also a former product owner of Python for Heroku. He is one of the most popular inspirational bloggers. His love for open source projects is undeniable. His attention to detail when coding is a practice that sets him apart. If you’re looking for one of the best Python experts, follow Ken Reitz.

Łukasz Langa is a Python core developer and production manager at Facebook. He is one of the greatest Python experts. He created a code formatter for Python known as Black, which is now being maintained by the Python Software Foundation. His Twitter feed is packed with new releases and updates that are of invaluable help to the Python community. Be sure to follow him to keep up with the trends.

Tom is a software engineer who specializes in API design & development.

His extensive experience as a tech lead, involvement in project management roles, and great depth of programming knowledge make him the guy to follow. You can follow him on Twitter where he discusses more on the Python community, the Django REST framework, and other open-source projects.

Talk about a great Python blogger! Reshama Shaikh is a data scientist/statistician who sits on the boards of a number of open source Python projects, including Big Apple Py, Women in Machine Learning, and Data Science. She has written extensively on Python and the complexities around the codes of conduct.

Haki Benita is a software developer and a technical lead, who loves working on web development, databases, performance tuning, and software design.

He has written a myriad of articles, particularly on Django. Some of them include How to move a Django model to another app, 5 ways to make Django admin safer, and How to provide test fixtures for Django Models in Pytest.

If you’re a Pythonista seeking to delve a bit deeper into software engineering, be sure to follow Haki.

Learn more about codes, big data, and open source software from this enthusiastic Python blogger! Tomaz Muraus is a member of the Apache Software Foundation. Apart from his prowess in software development, he is hands-on with his projects, always taking the best and most technical approaches.

In addition to his love for programming, Tomaz is interested in animal welfare, civil rights, and social action. Catch up with him on his personal blog where he speaks more about software engineering and life in general.

Daniel Roy Greenfield is an awesome Python blogger with a great depth of software engineering knowledge. Daniel created a number of large open-source projects including Cookiecutter Django and Django Crispy Forms. He constantly shares the goodness of Python on his personal blog. He is also the co-author of Two Scoops of Django.

For everything you need to know about Python and software, listen to what Nikita has to say. He is a popular Python blogger who has written articles that can guide aspiring developers to understand Python. These articles include “Higher Kinded Types In Python” and “Typeclasses In Python”

Matt Layman has more than 10 years of web development. He enjoys working on open source projects. His blogs discuss issues about Python or Django. You can follow him to learn from his software development tutorials or watch him streaming on Twitch - mostly on Wednesday nights at 9 pm Eastern time.

Kevin Goldsmith is an experienced leader, speaker, and Chief Technology Officer at Anaconda.  He is regularly invited to speak about building strong engineering teams at conferences. Kevin’s technical focus is on consumer product development, user experience, service scalability, and connected architectures. Follow him to find out more about what he has to offer.

Learn more from this enthusiastic Python blogger. Edward Z Yang writes about Python and other programming languages. He is well-known for his ability to create incredible software applications. One of his most popular articles is “Idiomatic algebraic data types in Python with dataclasses and Union” where he discusses ADT.

Armin Ronacher is a young open source software engineer who created the Python API framework Flask and the Jinja template engine. He is the Director of Engineering at Sentry. He is also a popular Python blogger with a strong social media presence and you can gain extensive knowledge on software development by following him.

Ines is a software developer and the co-founder of Explosion, the makers of spaCY. spaCY is one of the most popular open-source libraries for Natural Language Processing in Python. Her love for coding and developing websites at the tender age of 11. She became a Fellow of the Python Software Foundation in 2020.

Krace Kumar is an energetic Python blogger. Some of his trending articles include Python Typing Koans, 5Reasons To Use Py-tests, and Parameterize Python Tests. Krace is interested in server-side programming and data science and he discusses these subjects with a passion. You can get in touch with him on his social media platforms.

Evidently, the men and women mentioned above have made it in life. They have definitely done something right or pressed a few right buttons that brought them here. Now, they are giving back to the community and we are glad you have met the heroes! Though you might not be able to know them all personally, their blogs and social media handles are a sure source of inspiration and an overflowing fountain of knowledge.

In addition to updates on what they are working on, the latest information and news on Python programming, and resources to tap into, some share their life experiences that will help shape you into an even better developer. This is not an exhaustive list, if there is anyone we missed, you feel is worthy of it in 2022, please do not hesitate to contact us. With your help, we will expand it and include all influential bloggers and experts, leaving no stone unturned.

Equipped with this list, it is ultimately up to an individual to either be part of the information network or live in a cave, walled away from the most important trends, updates, and news in Python. However, whatever you decide, you do not want to miss an opportunity to join one of the most authoritative and consistent networks out there.

So, if you are in need of the best programming projects, networks, information, and experiences to bolster your career, the Ideamotive Talent Network is the ideal place for you.

Before leaving, read more about Java and other languages to stay informed or review more lists like this one here on Ideamotive.

Python Today. What Is The State Of Python Development In 2021?

Why Is Python a Great Choice For Data Analysis?

What Is Python And Why Should You Consider Using It?