We use technical and analytics cookies to ensure that we give you the best experience on our website. You can learn more about it in the Privacy Policy page.
Accept & close
Looking for top Rust Developers? They are just a few clicks away.
Hire Rust Developers

Rust vs C++: Which Technology Should You Choose?

Rust and C++ languages are very important in IoT development: they are both utilized in the areas where the direct connection with hardware configuration, speed of performance, and low-level access to memory and controllers matter the most. Specifically, device and application levels of IoT, system programming (drivers, operating system kernels, controllers, etc.), desktop utility programming, 3D game development, and many other spheres. Let’s check the most important comparison areas to find out which of these two is the best choice for your project!

C++ is an “old-school” object-oriented programming language developed by Bjarne Stroustrup in 1985. It improved the conception of the C language, becoming a so-called “C with Classes”, which was a kind of revolutionary solution several decades ago. C++ was designed as a really powerful system programming instrument: literally, the majority of the Microsoft products were developed using different editions of Visual C++ (or simply C++), including the “epic” software packages, such as Windows 95, 98, ME, 200 and XP. Since it’s an object-oriented programming language, C++ provides a determined code structure, enables reusability of code modules, and is also praised for fast performance. Moreover, it’s a multi-purpose language meaning you can use it to build a very wide range of products from resource-constrained software and basic graphical user interface applications to various sophisticated 3D visuals, desktop games, and powerful business packages. С++ is valued by developers for its wide capabilities as well as efficiency, and flexibility.

Rust is a system-level programming language, developed by Mozilla in 2010, which is aimed at achieving higher performance and better safety levels in comparison to C++. Specifically, it’s designed to cope with certain issues that C++ has been never good with, such as memory-related inefficiencies and concurrent programming. In terms of syntax, Rust is pretty close to C++, but it appeared to be more “loveable” (in fact, it was named the “most loved language” for five years in a row) meaning it’s more convenient and versatile than others, so a great number of developers has employed it for their projects instead of C++.

Why Should We Compare Them?

Owing to a similar syntax and better approaches to handling memory and errors, Rust is nowadays considered an alternative to C++, and the developer community members are attentively considering the arguments pro or against shifting from C++ to Rust or backward. Both languages have certain competitive fields like Web, Game, and UI development. Before you finally decide on which of two languages to adapt for your latest project(s), let’s consider some Rust vs. C++ comparison factors and highlights.

Rust vs. C++: Quality and speed of coding

C++ is a dynamically-typed language, so there is a lack of measures to prevent code errors and spot the problems prior to compiling the whole program. Rust is known as a statically-typed language with many additional improvements, and that’s why its process of validating the code is much more rigorous than C++ has. Rust offers a highly attentive attitude towards code quality/security, making it one of Rust’s major advantages over C++ and the reason many programmers opt for it.

Many devs writing their code in Rust say that the programming process is definitely more comfortable owing to elaborated semantics and a well-working system taking care of undesired behavior prevention. In C++, it’s not so easy to avoid undefined behavior, as this language sacrifices such features to speed of working. Nevertheless, coding in Rust, as well as C++, can be tricky for beginners as both are complex system-level languages that let you learn and control the underlying computational process behind the scenes.

Conclusion: Rust gets a point here as it allows easier coding.

Rust allows reaching a higher-level performance in comparison to C++ because of its better safety standards that decrease the development process cost. For example, to ensure faster operation, C++ does not have automatic garbage collection tools, which might contribute to multiple runtime errors. At the same time, one of the key differences making Rust safer than C++ is that the code flaws can result in just compilation errors instead of run-time errors. On the other hand, C++ can reach its optimal performance and produce extremely fast applications with less time spent for code compilation and execution thanks to its huge standard codebase (STL-library) that can cover many shortages when used by an experienced C++ engineer.

When you carry out some efficient system programming, you should keep memory under low-level control to avoid costly memory leaks. In C++, manual memory management and spotting memory errors can be too intricate or requiring tedious manual efforts increasing the overall cost of development (however, that can be resolved with the help of certain tools). Rust is designed to minimize such issues: with its ownership analysis method, compile-time memory checks, and no “stop-the-world” garbage collectors, Rust processes memory issues and examines the viability of code at compile time instead of runtime.

Conclusion: Rust allows you to create a better-safety code with lower development costs. However, none of the languages have distinct features that cannot be replicated in another language: everything depends on the powers of the compiler, quality of the code, logic behind it, and, at the end of the day, a proficiency level of the developers behind it. If you want to see a more specific and detailed comparison with lots of tech details, check these C++ vs. Rust benchmarks.

Being a heavily used language for decades, C++ enjoys much stronger support and comes with a myriad of frameworks and libraries. Rust still looks pretty immature in comparison to C++: it features a small standard library and not too many options to extend its functionality. Although Rust seriously lacks in the availability of frameworks and extensions, the good news is that the language is still evolving at a good pace and the community is quickly growing.

Conclusion: C++ is much more powerful in terms of extensibility.

Among the key features of Rust we can list the following:

C++ key highlights include such points as:

There are about 5.5M developers who are using C++ at the end of 2020. At the same time, the Rust community is five times smaller: less than 1.5M developers. The results are obvious: less support for Rust, as well as harder times for a recruiter who’s looking to hire a decent Rust developer. You can find more Rust statistics in their blog. There is a wild number of C++ questions and answers in the Stack Overflow (more than 700k), while Rust has only 20k+. It means that Rust users still have so many issues to address on their own, without strong backup from their community, and it might result in a prolonged development time and higher costs for certain types of projects.

Conclusion: C++ is a sure winner in this category.

Rust vs. C++: Cost of development

It seems Rust developers can count on higher salaries in the U.S. (and worldwide too): they have $90K on average with a considerable portion of developers earning over $100K per annum. At the same time, C++ developers have a higher competition in their segment as their average salary is around $70K annually. The highest salary rates for both positions can reach as high as $120K or more in the U.S. The wages can be much lower on other continents, including Eastern European countries (Poland, Romania, Ukraine, etc).

Conclusion: Hiring a skillful Rust developer seems to be more expensive as there are fewer of them in comparison to C++ devs. Unless you’re trying to outsource the development abroad (as a solution).

Here is a shortlist of highlights per each of the languages, so you round up your ideas about C++ vs Rust comparison.

Conclusion: it’s hard to name a sole winner here, as far as both, C++ and Rust, are pretty similar in their capabilities. However, the largest downside of Rust is its limited community and shortage in terms of auxiliary software.

C++ is massively utilized in the development of Games, IoT apps, IoT Devices, Desktop applications, and significantly less utilized in the fields of Web, Cloud, Mobile. As we mentioned before, C++ comes with many different frameworks, libraries, and toolsets (some of them are open-source and some are paid) making it available to many industries and purposes. It’s enough to say it was used to develop Windows operating systems. In terms of the games industry, it works with the Unity development framework and Unreal Engine.

Specific C++ written products include thousands of popular games, including Civilization IV, Half-Life 2, Doom 3, etc (you actually cannot stop naming them as the list is endless), and popular software packages, such as Adobe Photoshop & Illustrator, Microsoft Office, the inner video processing algorithms of YouTube, and many others.

What is Rust good for?

Rust is majorly used in AR/VR, IoT apps, and hardware programming. Since Rust is a low-level language allowing high-level abstractions it comes in very handy when it’s needed to somehow find a balance between high- and low-level functions. With access to memory and hardware, Rust is doing good in embedded or device-based development. It perfectly works for writing low-level software, such as kernels of operating systems, system utilities, and microcontroller drivers. Those technically deep levels of computing architecture “appreciate” Rust’s core types, functions, and reusable library code. Among the examples of Rust-written operating systems let’s name Redox, RustOS, QuiltOS, BlogOS, intermezzOS, Tefflin, etc.  Mozilla Firefox uses it for its Servo engine, and other large brands, including Microsoft or Google, are using it for separate components of their very efficient systems. 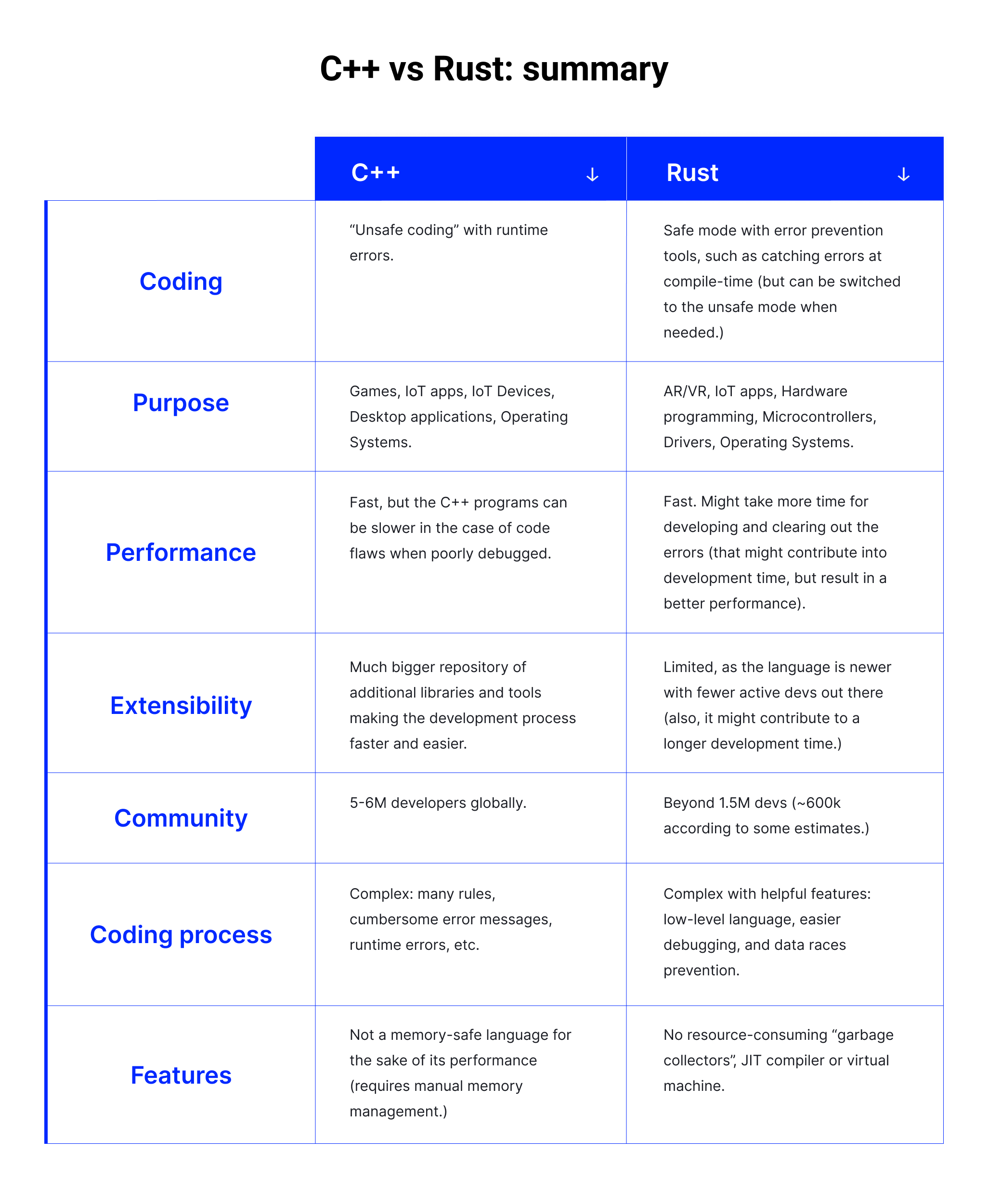 As you can see both languages have a lot of nuances to consider. There is no one winner in this C++ vs Rust race. If you’re still not sure what language to use in your project (and it’s normal if you're not a developer yourself), make sure to have a brief talk with our skillful software consultants.

We’ll be glad to learn more about your idea or product, and offer you a complete solution including help from our in-house C++ and Rust developers of the highest proficiency level at a reasonable price. We’ll do our best not only to select the right stack of technologies but will also help you to achieve the best compliance with the highest industry standards!

Looking for talented developers to build or scale your web product?
Our vetted experts are ready to join your team.
Hire Web Developers