We use technical and analytics cookies to ensure that we give you the best experience on our website. You can learn more about it in the Privacy Policy page.
Accept & close
Looking for top Go Developers? They are just a few clicks away.
Hire Go Developers

Go vs Node.js - What Should You Choose For Building Your Product?

In order to choose the most appropriate development tool, the programmer needs to know all their advantages and disadvantages. Undoubtedly, it may be really hard to compare all the languages and environments for defining the best for you.

A professional web developer is a person who possesses a set of different skills, but the most important feature is the ability to quickly adapt to any circumstances and learn new things. This article may be useful for specialists who doubt which tool: Go or Node.js to choose or simply want to enrich their knowledge with handy data for future projects.

On our website, you can obtain useful data from Ruby on Rails vs Node.js comparison, and in this article, you can explore the difference between Go and Node.js to make the right choice for your future project.

The programming language Go is often named Golang due to its domain name and is known for its efficiency, flexibility, and dynamic. This open-source project was designed at Google back in 2007 by such prominent programmers as Robert Griesemer, Rob Pike, and Ken Thompson and was released in 2012. Go was highly influenced by the C programming language but is more simple and safe to use.

This functional and object-oriented language enables great programmers' productivity since they prefer effectively writing programs without any obstacles. Go is characterized as a fast and statistically-typed language having run-time reflection and garbage collection, so there is no wonder that Google, Uber, BBC, Twitch, Dropbox, and Soundcloud are written in Go.

Node.js is an open-source cross-platform runtime that may be used for almost any type of project. Its V8 JavaScript engine allows it to execute code outside the web browser. Released in 2009 by Ryan Dahl, the technology underwent several updates that highly improved its properties. Node.js is very performant and is widely used for building network programs with the help of one tool.

When performing I/O operations, Node.js resumes them after getting a response instead of blocking the thread and wasting CPU cycles. Node.js’s standard library provides first-class support for networking, and the developer can freely use 1,000,000 open source packages. The most popular software users list LinkedIn, Microsoft, Netflix, PayPal, and Amazon Web Services.

Why Are They Compared?

The backend of your project is one of the most crucial aspects of programming, and you need to rely on an effective and secure tool. Go and Node.js programming tools are considered the most promising backend technologies. Consider that JetBrains named Go one of the most promising languages, and it has the biggest number of developers who would like to adopt or migrate to it. Furthermore, Node.js, a JavaScript runtime environment, is beloved by 66.8% of respondents who want to continue developing with it in the future.

It’s clear that the choice between two popular and promising program-building tools is rather complicated. However, Go and Node.js coincide in the aspect that they are both open-source, but Go is a programming language while Node.js is a runtime environment for JS code execution. When deciding what to choose: Go vs Node js for microservices, take into consideration that Go easily handles high loads whilst Node.js is a source of ready-made solutions. There are plenty of other answers to all your questions about Go and Node.js, so keep reading to stay tuned for the latest programming trends.

Before going deep into details let’s look at the TL;DR version that displays the principal features of both tools. 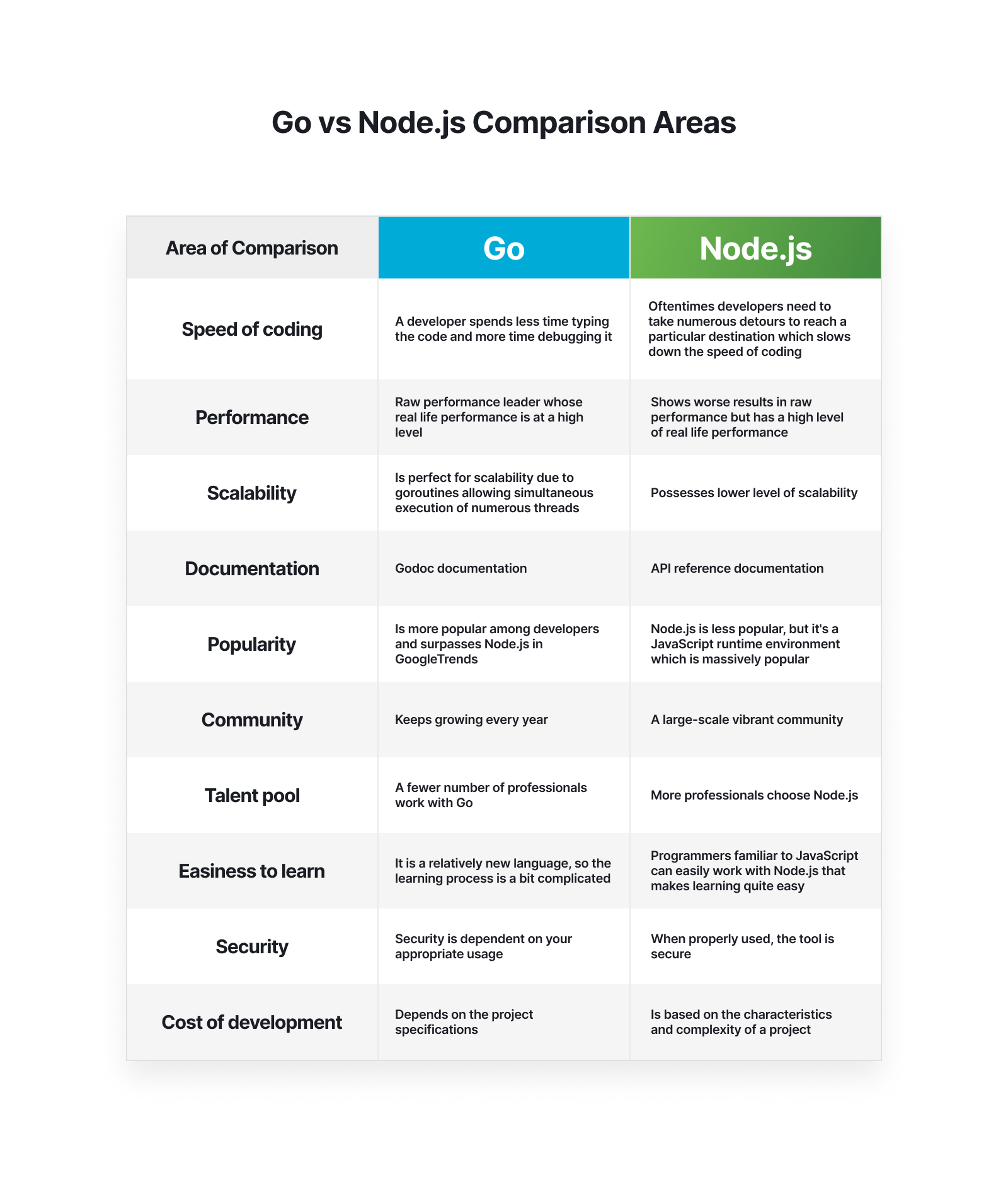 Go vs Node.js: Speed of coding

Node.js offers numerous ready-to-use tweaks which simplify the coding process in some cases. However, it also offers a limited set of possibilities in comparison with other backend programming languages, so sometimes a developer needs to find detours to reach a particular destination.

The question of Node vs Go performance is crucial for programmers seeking the right tool for project building and we try to define what is better.

Go’s performance characteristics coincide with those of C/C++ that enables the language to be rather fast and light-weighted. It reaches the raw performance of CPU and memory-bound tasks while Node.js fails to do so.

Node.js is based on the interpreted language making its performance not so fast and efficient as most compiled languages.

Real-life performance shows that both tools are at the same high level and work at similar speeds. If we consider node vs go benchmark task performance, it’s observed that Go takes less time and memory for operation performance.

Scalability is grounded on the ability to increase performance, and here Node.js loses its positions because of less functional scalability and weak parallel processes that aren't convenient to large projects.

Go has a major asset - goroutines that are the methods or functions, allowing effective and reliable execution of parallel threads due to simultaneousness and smoothness. The initial size of goroutines is only 4 KB, while operating system threads amount to 1 MB. The developers have the possibility to run thousands of goroutines concurrently without using too much RAM within the Go environment. Complex channels for information transmission between two Goroutines allow program structuring for being easily maintained in the future. 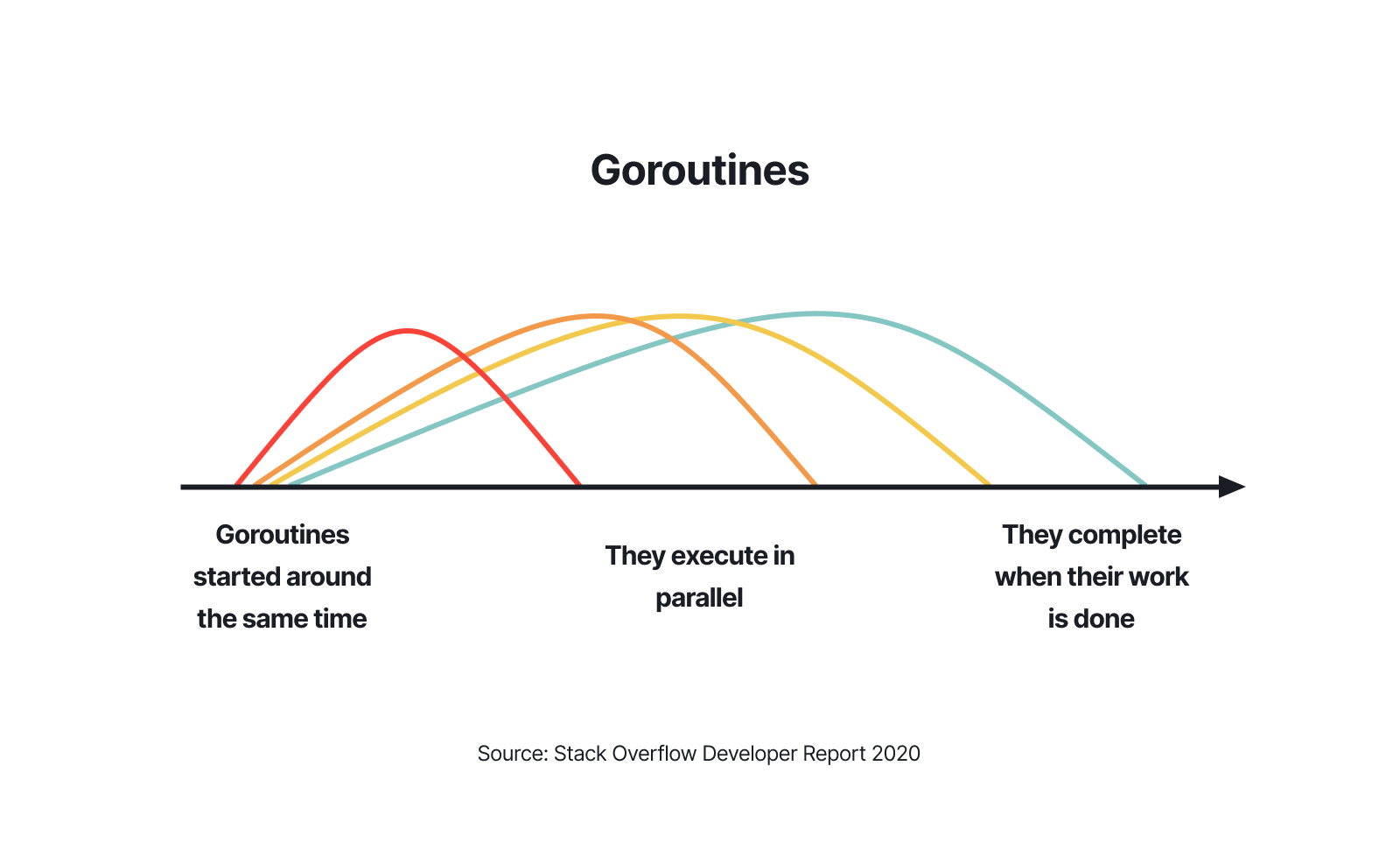 Code documentation enables you to understand the principles of your code work and improves writing capabilities. Go programming language possesses a Godoc tool used for documentation extraction and generation for Go programs. Godoc documentation is converted to HTML or to text with the help of the go/doc package.

Node.js’s official documentation is API reference since it’s a JavaScript runtime built on the V8 engine. The command-line option document allows you to get acquainted with documentation usage, and here is the example of a web server written with Node.js.

The popularity of a development technology highly influences the programmers' choice as they rely on the opinion of those who have the experience of using this or that tool.

Statista survey shows that 51.4% of respondents chose Node.js for the creation of their products. HackerRank says that Go is the priority language for the developers to learn so it represents great prospects for the future.

We can see that every tool is well-known in their domains taking into account that Node.js is a runtime environment and Go is a programming language. But the data obtained from GoogleTrends represents that Golang has been prevailing over Node.js during last year as well as since 2004 to the present, so you’re left with the choice. 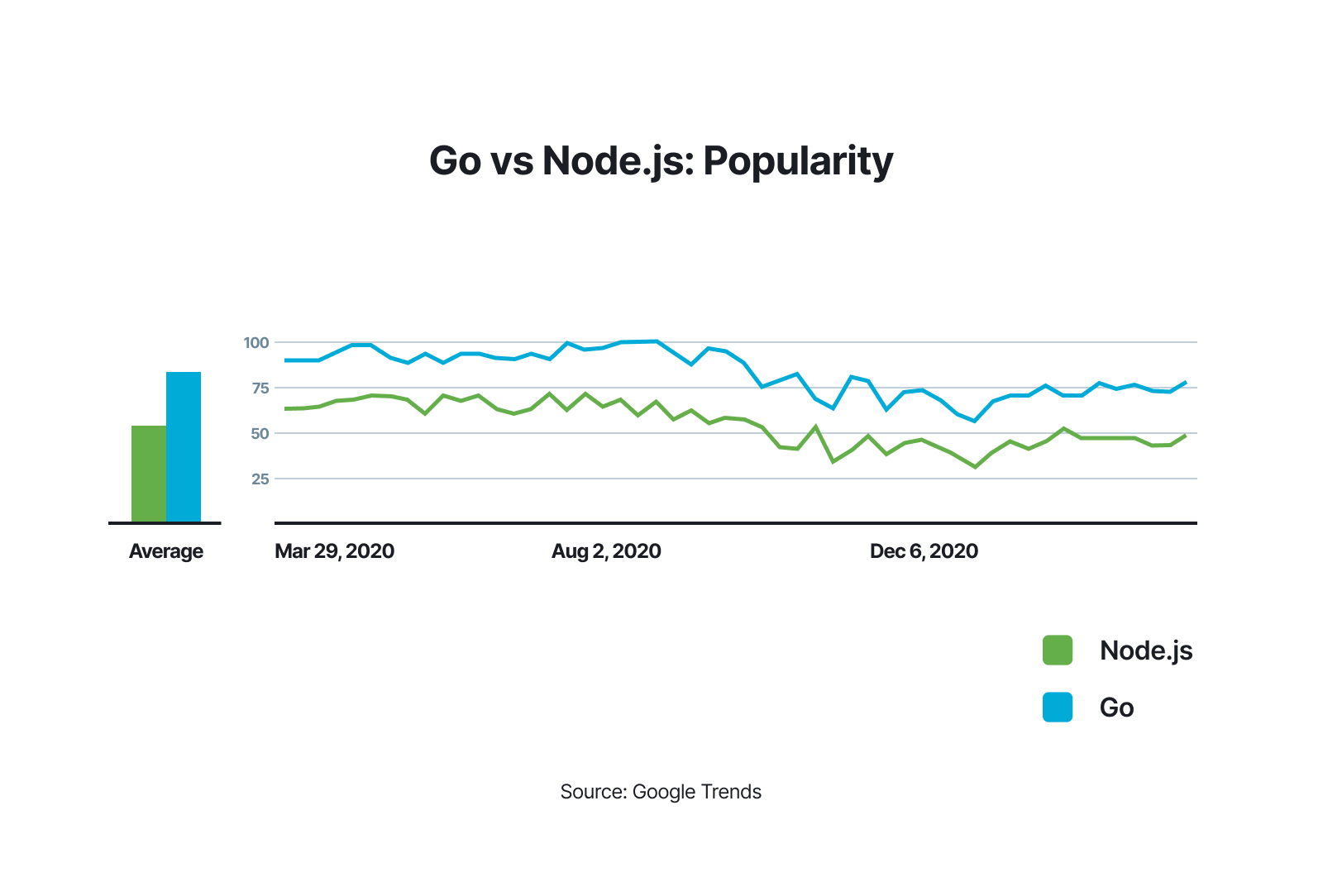 Even the most innovative and effective technology needs to be supported and widely used by developers since it makes the tool known and interesting. People should take advantage, improve, fix, create, and discuss the tool to engage more community and make the language or environment respected around the world.

Go and Node.js are open-source tools meaning that a large-scale community benefits from their stunning features. They have repositories on GitHub and are used by many developers worldwide. Node.js has been downloaded one billion downloads and reached 56,000 stars on GitHub, while the Go community is growing each year, and more and more developers want to learn this language in the future.

Node.js has a large community with prominent users like Intel, Microsoft, PayPal, and Go’s support from Google attracts many prospective specialists.

From the data obtained from survey respondents worldwide on Stack Overflow, we can discover that 51.4% of 40,314 professional developers choose Node and 9.4% out of 47,184 responses - Go.

Go vs Node.js: Easiness to Learn

Go is a relatively new programming language, possessing specific concepts, rules, and processes. Consequently, you can find a small number of resources available online, thus be ready for practical study and constant research.

Node.js’s runtime environment is based on JavaScript, the most widely used programming language worldwide, thus it will pose no difficulty for the programmer Node.js if they have basic knowledge about JavaScript. There is a huge number of online resources for self-education as well as the experienced Java community members who offer constant support.

Program security means that it can resist hacker attacks and be correctly used during code writing. Consider when you will properly use the tools, timely check them for errors, and update them as soon as the latest version is released. Moreover, code protection from SQL injections and sensitive data will result in both Go and Node.js security.

Go vs Node.js: Cost of Development

In order to develop a high-quality project, it is necessary to hire top developers who can manage every project and have a profound knowledge base and experience. Consequently, they should be fairly remunerated for their work, so after analyzing the average payment per hour, we can see that as Node.js as Go developers earn from $20 to $40 per hour. The average cost of a project will amount to $10,000 or $40,000, depending on the number of working hours. Thus we can conclude that their cost of development is equal and is based on the project specifications.

Take a look at a brief outlining of the principal advantages and disadvantages of both tools in order to fathom the uniqueness and appropriateness of specific technology for your project. 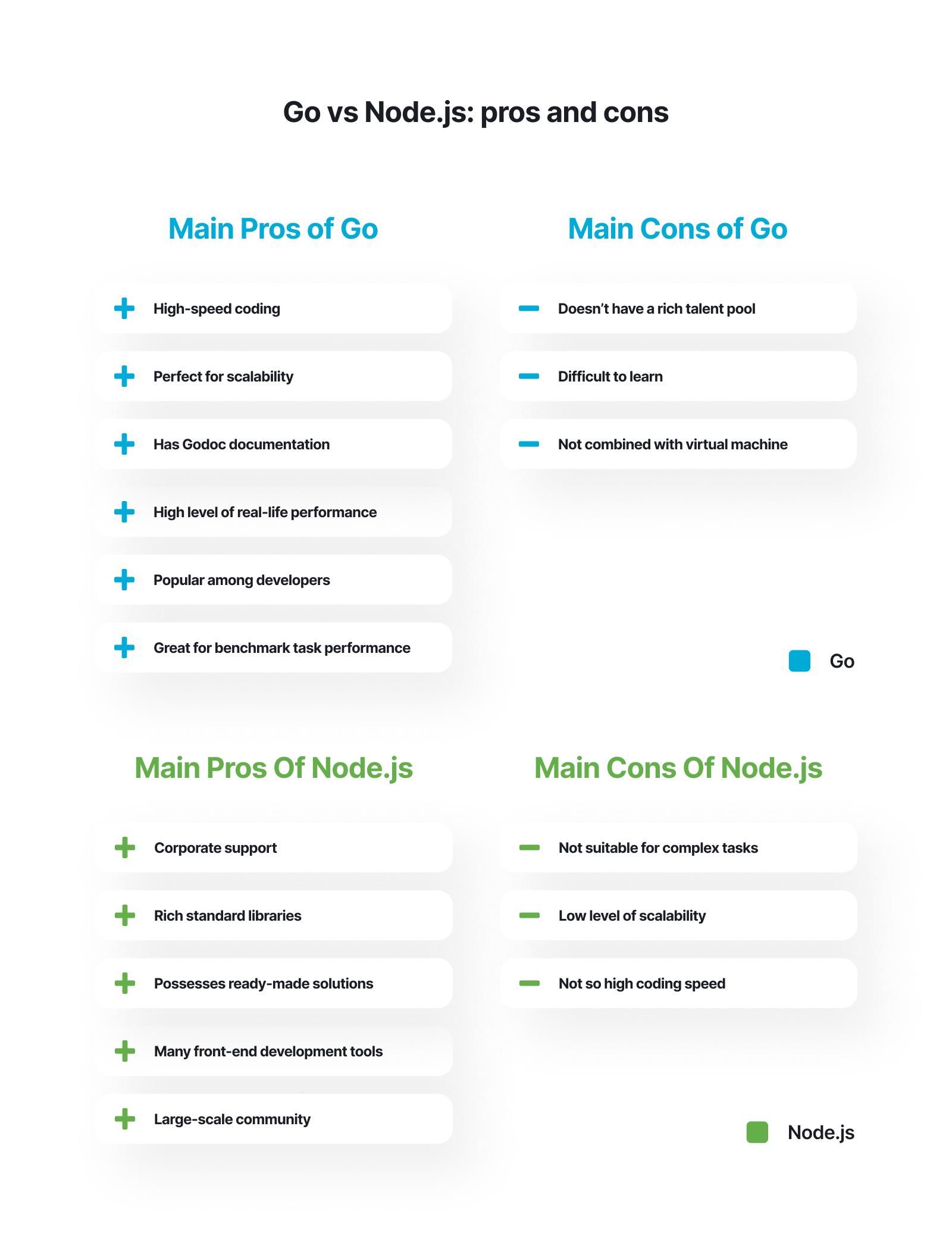 Go and Node.js Areas of Use

In order to decide which tool will perform better, it’s necessary to get familiar with the purposes they are used for. Go is a newcomer in the programming language world, so with its launch, many companies decided to migrate to this tool, even those using Node.js, and they remained satisfied with their choice.

When Do We Need to Use Go?

Go language carries out many functions simultaneously and is widely used for scalable server programming as well as large software systems.

When Do We Need to Use Node.js?

Since it executes JavaScript code outside of a browser, there are many cases when Node.js is used: from chat applications to embedded systems and internet-connected devices.

You can see that Node.js and Go are both great development tools with their peculiarities and advantages. We hope that this article assisted in your tough choice between the technologies, but if you still have doubts, address our Go and Node.js developers to obtain professional advice on any question.

Everything You Need to Know as a Product Owner and CxO