We use technical and analytics cookies to ensure that we give you the best experience on our website. You can learn more about it in the Privacy Policy page.
Accept & close
Looking for top Golang Developers? They are just a few clicks away.
Hire Golang Developers

There are just too many programming languages to learn and use in projects. You are probably well aware about the characteristics of Java, Python, C#, etc. Today we will learn about a little bit less popular and more modern language - Go.

In the Stackoverflow survey Go is being cited as the 5th most loved and the 3d most wanted programming language. 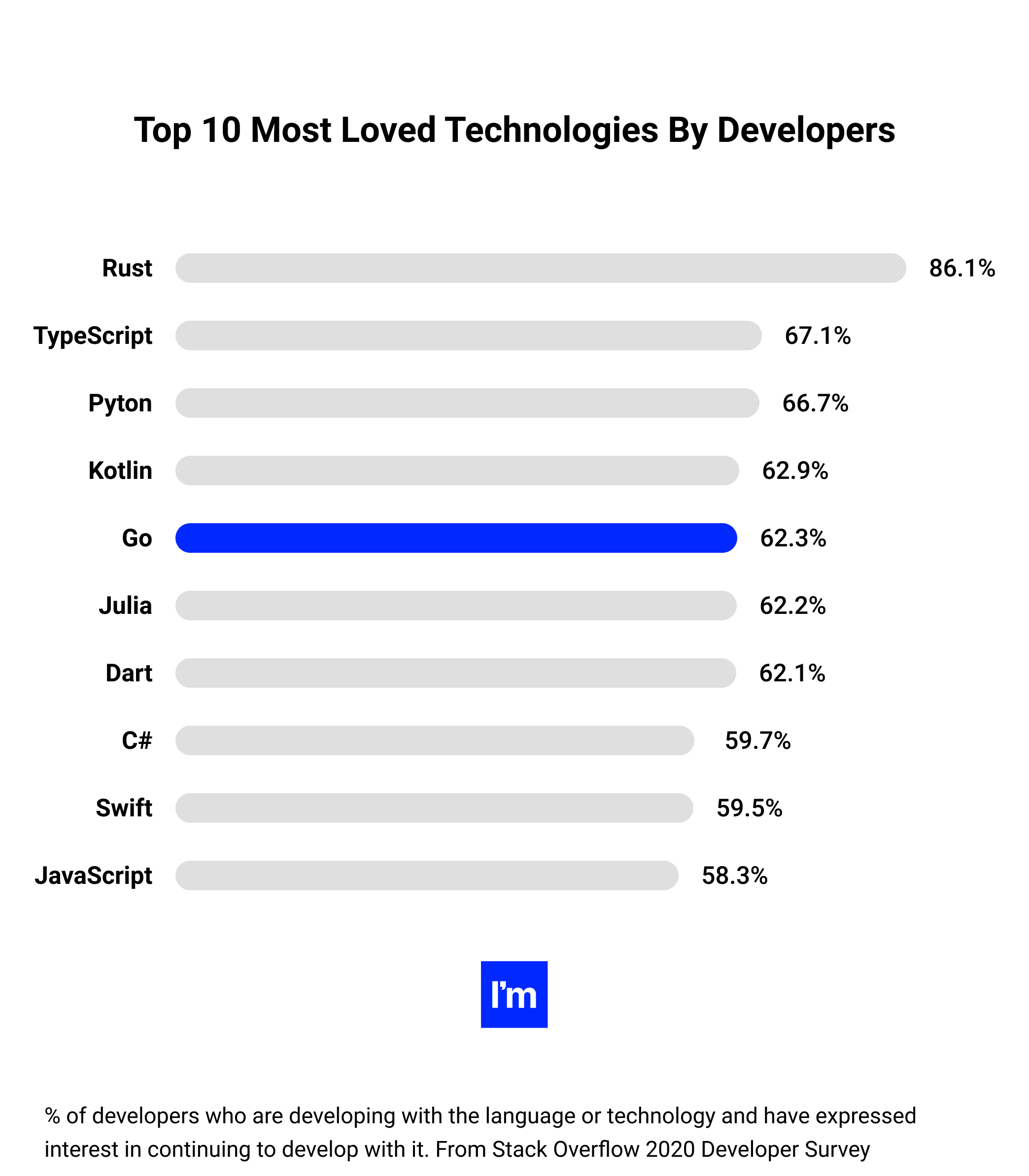 Go is also known to be one of the highest-paying languages as developers working with it make on average $140K a year.

Go is a statically typed compiled programming language. Its domain name is golang.org which is why some people call it Golang.

The language first rolled out in 2009 and was developed by Google. Robert Griesemr, Rob Pike, and Ken Thompson united in their dislike towards C++ and tried to design a language that includes useful properties of other languages but does not possess cons of theirs.

Go combines the advantages of such languages as C (static typing and run-time), Python, and JavaScript (uncomplicated syntax).

In 12 years, Go surpassed the popularity of Ruby and Kotlin and became one of the most loved and wanted languages in the development community, according to the StackOverflow Developer Survey.

Can Golang Be Used For Web Development And Creating Web Apps?

The debate about Golang web development does not seem to have an end. There are web developers who believe in Golang supremacy backend development and there are ones who rely on “classical” languages. You can even find developers building their frontends in Go, although it is worth noticing that it is more of a "server-side" type of frontend.

But in general, Go can be definitely used for web development. Yet, like any other language, it has its pros and cons. Let’s take a look at them to have a better answer to the question, rather than yes or no. Syntax of Go is very easy, especially when you have a background in C or Java. Designers of the language are from Google where many developers had to work on the same code. Therefore, they decided to create as straightforward and readable syntax as possible to make sure that other developers can understand the code as well. Code fragments are also quite independent, meaning that if there are changes in one section, the other section will be not affected.

Golang is a fast language because it compiles to native code and is statically typed. The compilation process is fast as well. Developers claim it to be faster than Python and as fast as C++.

No Need For A Web Framework

Many of those who claim that Go is not suitable for web development to say that the language does not rely on any big frameworks. In fact, it is not a problem. Go has a great standard library: clean, consistent, and easy to use. Moreover, you do not have to conduct extensive research to find a suitable framework.

Net/http package is vital for web development, and you can get this from the Go standard library. Go offers 3 http requests: get, post, and head. By creating http. Client and passing value to Timeout, you can create more options and requests.

Go divides large programs into small tasks, and enables these tasks to run simultaneously through goroutines and channels. Consequently, a computer will perform tasks much faster and spend less time idle.

So Golang/Go is easy to learn and read, it is concurrent thanks to goroutines and channels, it is faster than many other popular languages, has an amazing standard library, and offers a net/http package for web development.

You can not reuse the same code for the same functions but in a collection of different types. Consequently, you will have to write more code and spend more time building the web app. It is a known fact that maintaining a longer code is more difficult as well. If you are looking for tools to boost your productivity, find your life-savers here.

Golang is considered to be very young, especially compared to Java or Python. It means that it does not have a big community of Go web developers yet (it is steadily growing though), the better libraries are to be created, and more books to be written.

Its advantage is its disadvantage at the same time. Go is so simple that it is regarded as superficial. Due to that fact, there are a lot of limitations and the phenomenon of dealing with low-level features in a high-level programming language.

All in all, the language requires more code, is yet to be developed, and has limited usage and features especially when it comes to Golang for backend development.

What Types of Solutions Work Well with Go?

No matter all the critiques, more and more companies opt-out for Golang web app when it comes to developing the following types of projects:

Social media platforms usually have high loads and Go offers great performance and concurrency. That is why YouTube, SoundCloud, and Netflix decided to hire Go web developers for their projects.

Such services as Uber need to ensure quick map processing and be able to handle a massive amount of data. Golang is able to deliver great performance and manage thousands of requests in a span of one second.

Overall, you do not need a framework in Golang, as we have mentioned earlier. Yet, if you want to speed up the process or you need additional help, the language does support some great web development frameworks. These includes:

Gin is a very simple framework, created to perform vital tasks for web development. The framework is fast, can catch crashes or panics and recover, has a routing feature (so you can create the appearance of the web application), collects errors from HTTP requests, and performs rendering.

Gin has extensive documentation on GitHub which can help beginner developers. Yet, Gin will not work for big backend applications or enterprise-level solutions.

Beego has more specific features as interfaces and struct embedding. The framework automates testing, packaging, and deploying, thus making web app building faster. You can also monitor QPS, memory and CPU usage, goroutine status, enabling full control to the developer over their web apps. Moreover, Beego has its own Object-Relationship Map (ORM) that significantly simplifies the process of organizing the software’s database.

It may be not suitable for beginners due to extensive features and complex core but will surprise Django users with the same command line.

The main focus of Kit is building microservices and creating powerful interfaces. Developers can pick databases, stages, components that they like the best. This framework is light-weight as well, thus becoming easy to use.

While using Kit, you can focus on the business part of programming as the framework was designed for interoperability.

One of the disadvantages of using Kit is the height overhead of adding API to the service that is caused by the heavy use of interfaces.

Echo is another minimalistic framework that manages to extend the features of Go greatly. It has extensible middleware, handles central HTTP errors, performs rendering, helps to build RESTful API, and includes TLS certificates.

Echo framework is maintained by a single developer, so its code is rarely updated which can be a significant drawback.

It is as easy as it sounds: http/net package but faster. Http has to allocate memory for the goroutine every time but fasthttp has a worker pool model with zero allocation. Fasthttp is great for handling a massive amount of data as it can easily handle more than 100K qps and over 1M concurrent keep-alive connections on modern hardware.

The only con of Fasthttp is that it is not compatible with Beego and HTTP/2.

Martini is an efficient and lean language, powerfully packed for quickly writing modular Golang web app/service. It boasts impressive and easy to integrate third-party support. Martini has been in the game for a while – there is ample documentation and a large install base.

When choosing the Golang framework for your project, it’s important to understand the characteristics, advantages, and possible limitations of each of them. In this article, we’ve discussed 5 of the most popular frameworks but also Golang offers many other options such as Gorilla, Gocraft, Buffalo, etc. Feel free to check them out as well to make a well-informed decision. 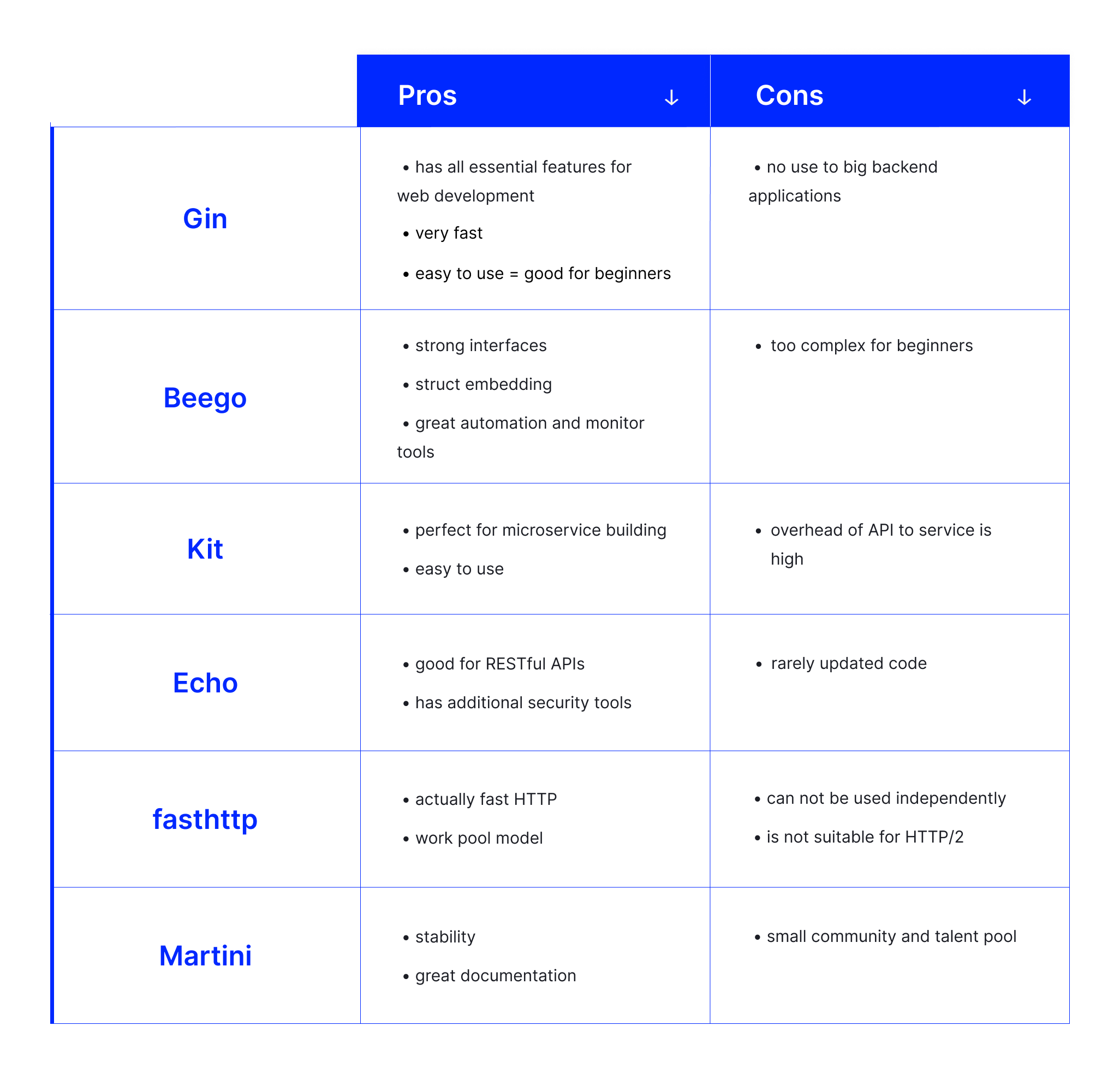 Go is relatively new in the programming world but it has proved to be a suitable choice for web development by supporting Google, YouTube, Netflix, and Uber.

It is fast, easy, supports concurrency, and has a great library that does not require additional frameworks. At the same time, some developers find it superficial and limited and get frustrated about long code with no generics.

If you want to make the development process easier or expand Go’s features, use frameworks such as Gin, Beego, Kit, Echo, Martini or fasthttp.

If you are still not sure whether Go is suitable for your project, or you need dedicated Golang developers for your team, do not hesitate to reach out to us!

Golden Rules to Follow When Designing an eCommerce Web-Based Product

Looking for Go development experts to join your team?

There are dozens of vetted Golang professionals in our talent network.