We use technical and analytics cookies to ensure that we give you the best experience on our website. You can learn more about it in the Privacy Policy page.
Accept & close
Looking for top Python developers? They are just a few clicks away.
Hire Python Developers

The choice of a programming language for a future project is one of the most important decisions a manager has to make. It affects the cost of development, safety and stability of the product, feasibility to scale when sales are up, and so on. Every language has a team of passionate adepts and the competition between them often reminds religious wars.

In this blog post, we would like to compare two of the most popular general-purpose object-oriented programming languages: Python and C#. Both languages are surrounded by stereotypes. To draw a more realistic picture of how both Python and C# look like, let’s study some facts and data about each language.

Designed in 1991, Python is an interpreted programming language with a strong level of abstraction. Python’s development project started in 1989 by Guido van Rossum for whom it was just a ‘hobby’ enterprise for entertainment during the Christmas holidays. Such a lightness in attitude towards programming became the characteristic feature of Python. Since the language has one of the easiest to learn syntaxes, it became super-popular among the beginning programmers and people, who are not engaged in coding full-time, like academic scholars.

C# is an object-oriented, multi-paradigm, type-safe programming language. Contrary to Python, which was initially a garage enterprise, C# was designed in the office of a major software company, Microsoft, by Anders Hejlsberg. It was built to satisfy the increasing demands for web applications that C++ and Visual Basic(VB) couldn’t meet. While developing a new coding system, Hejlsberg drew inspiration from such languages as C++, Java, and Object Pascal. Because of its compiled nature, C# is one of the fastest languages available on the market. The most popular C# framework is .NET. Development with C# requires additional tools: Visual Studio .NET, Far, and Redgate .NET Reflector.

Why Should We Compare Python and C#?

Although Python and C# are quite different in terms of syntax and language design, both languages are used in the same spheres: machine learning, back-end development, design of mobile applications, web applications, desktop software, and so on. Despite Python and C# being general-purpose languages, each of them has its own domain where it shines at its best. To understand better what are the most efficient application strategies for both languages let’s compare Python vs C#. Criteria to evaluate will be the popularity of the language, size and amity of the community, easiness of coding, performance, safety, a pool of available talents, and cost of development.

An important factor to keep in mind while choosing a technology for your product is the approval of the language among the professional community. The high popularity of the programming language indicates that the technology is reliable and trustworthy, while the decrease of interest in language signifies that in a short time there will be a need to switch.

According to one of the most prestigious ratings, TIOBE Index, both Python and C# used to be close competitors for the hearts of the audience and held an almost equal share of search-request. The situation in Python vs C# the contest changed dramatically in 2018 when Python significantly gained in popularity. Julia Silge, the data scientist at Stack Overflow, claims that such a shift is correlated with a wide explosion of AI, machine learning, and data science by an enterprise. 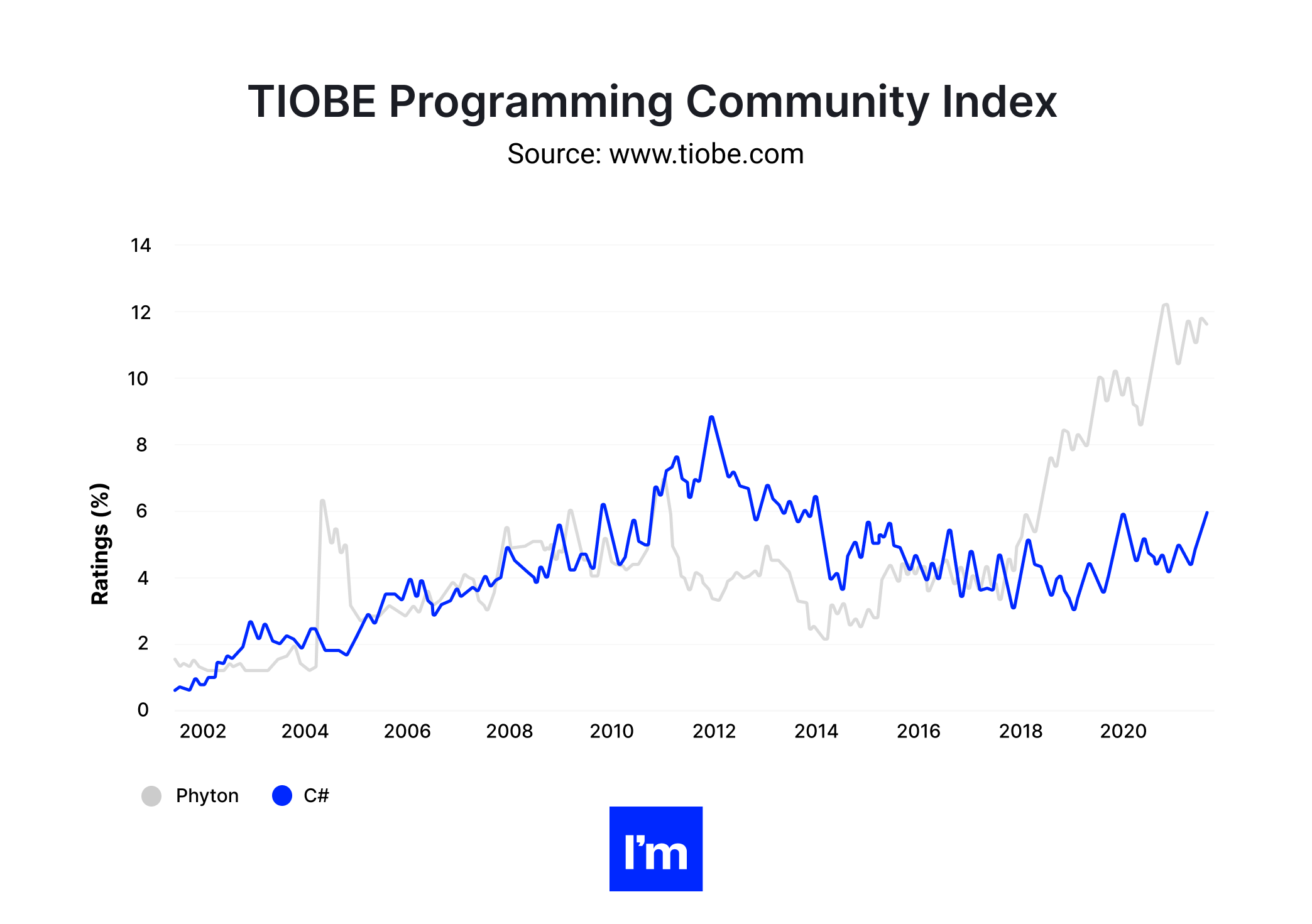 The success of the language depends much on the efforts of the community that invents new features, develops code packages and libraries, identifies and eliminates vulnerabilities.

Because of its huge popularity, Python has one of the biggest communities on the web. For example, there are over 2100 contributors on Github who develop Python’s framework Django and over 1600 people who work on CPython. With joint efforts, those people and many-many others created over 137,000 libraries available for download. Python’s community is very friendly and helpful. Analytics company SlashData ranks Python’s community of developers as the second-best in the world. The ranking of C# is lower, although still pretty decent. For two years in a row between 2017 and 2019 C# kept the top-four position. 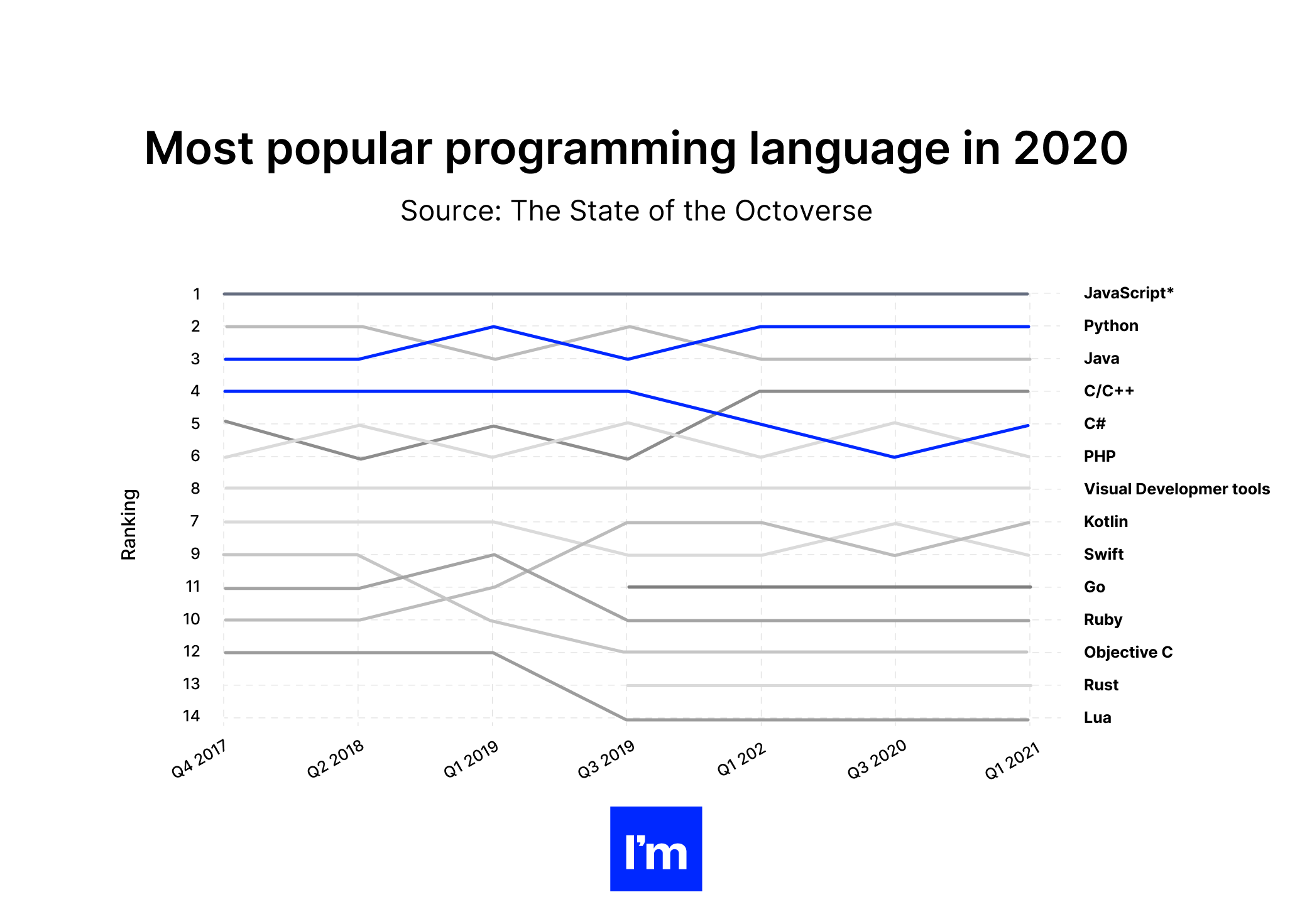 The simplicity of a code is an important characteristic to consider since it influences the quality of the final product. Clumsy code is hard to debug and secure, while the clean and well-structured program is easy to maintain for newcomers. As was written in Structure and Interpretation of Computer Programs, the textbook of programming taught at MIT:

In general, Python appears to be an easier programming language to work with than C#. According to Coursera, it will take you from two to six months to learn the fundamentals of Python, while C# requires much more effort, - from six to twelve months.

To get a better idea of how Python and C# work, let’s have a look at the ‘Hello, World’ program written in both languages. 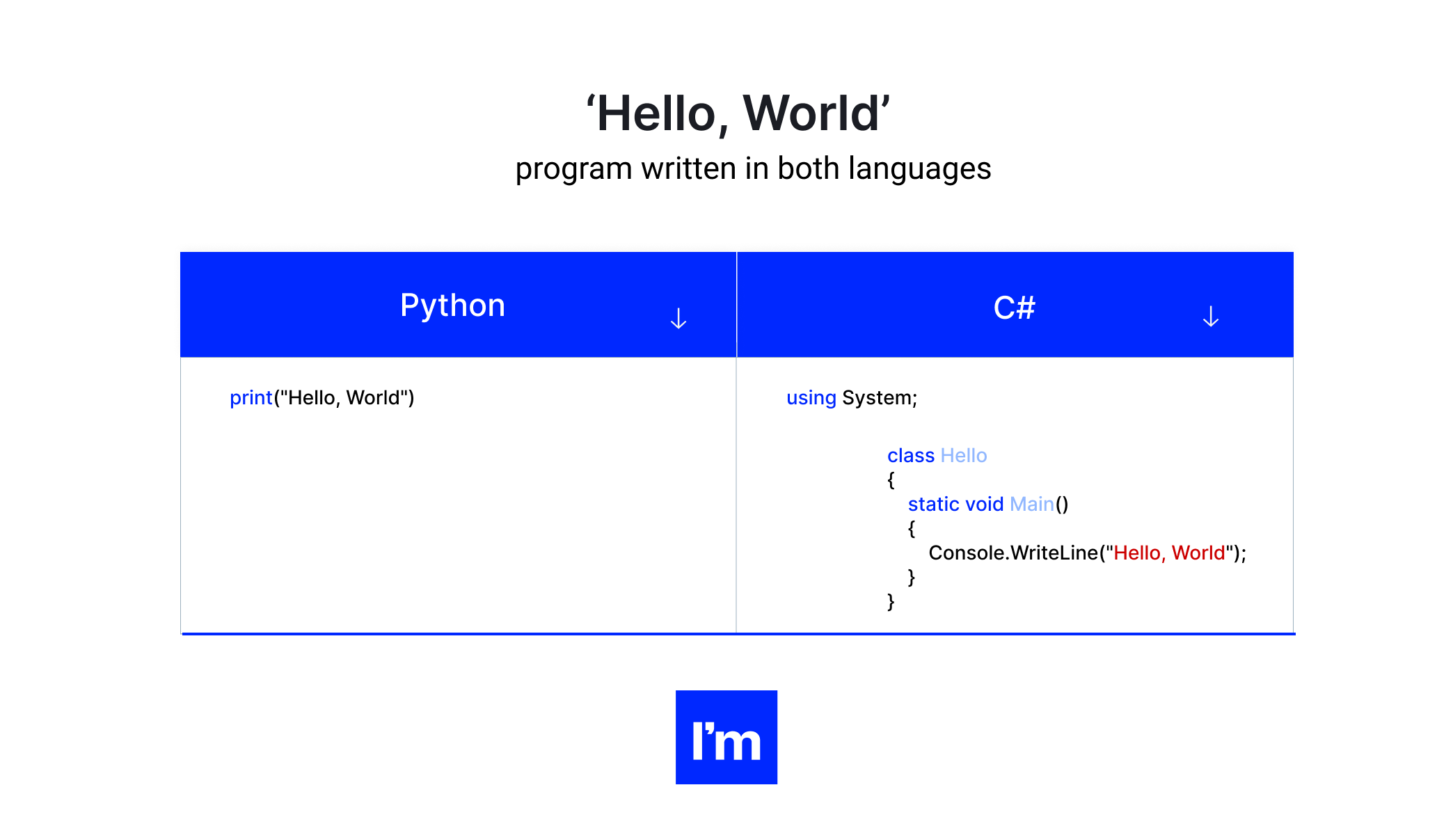 As you have witnessed, comparing Python to C#, the first one has a much simpler syntax than the other. It requires only 1 line to create a ‘Hello, World’ program with Python, while it will take 8 lines to write a program with C#.

Talking about performance, C# overcomes Python with a great advantage. To prove that C# runs programs faster with less usage of memory, let’s have a look at data about bench-mark programs execution. 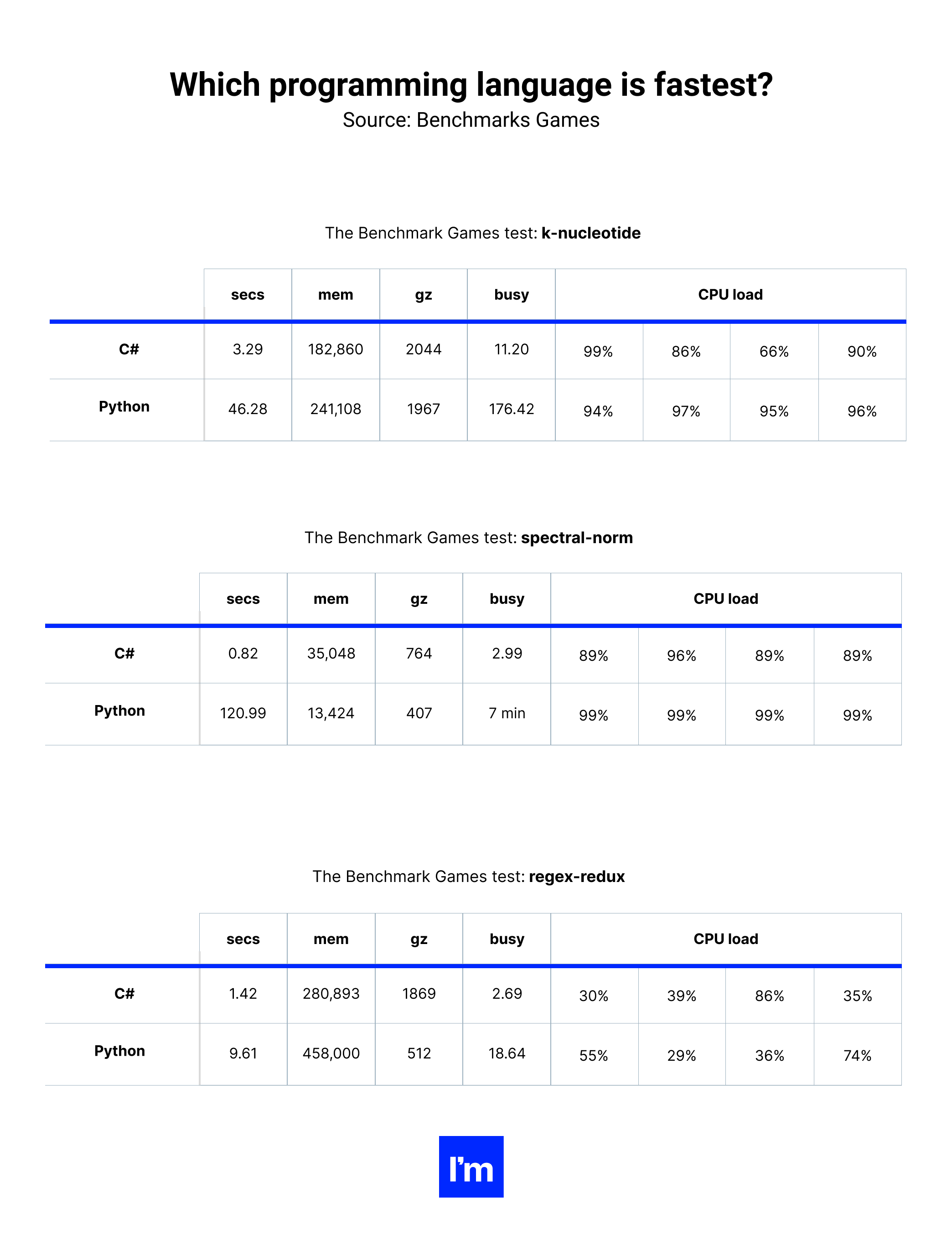 As you may see, C# executes programs much faster than Python. Is it a good reason to choose C# as a primary technology for the product? The answer depends on how important high performance is important for your software. Laurence Tratt, Professor of Software Development at King's College London, states that in the majority of cases the difference in language’s performance has no impact on the functionality of the software. The power of modern computers is so great that most programs run fast enough even with the slowest language implementations. Contact us and we will gladly assist you to pick the right technology and prepare the technical task.

2020, the year of the global pandemic and large-scale switch to remote work was also a year of cyber-crime flourishing. According to Sophos’ The State of Ransomware 2021 survey, 51% of organizations were hit by ransomware. The cost of such attacks is high. The average security bill paid by small and medium businesses was $170,404. For this reason, it is forecasted that safety standards for software in the coming years will be strict as never before.

The reliability of a product may be enhanced by the wise choice of programming languages. Old, tested by time and community languages, like C# and Python, appear to be more certain than new languages like Go or Rust. According to WhiteSource, Python shares the smallest part of reported open source vulnerabilities, - only 6%. The most common vulnerabilities are CWE-20 (Improper Input Validation), CWE-264 (malfunction of permissions, privileges, and access control), and CWE-79 (improper neutralization of input during web page generation).

If you are interested in other technologies, check our Go vs Python and Python vs PHP comparison.

Recruitment of a professional well-trained developer sometimes may be challenging. Fortunately, there are plenty of programmers who are familiar with both Python and C#. According to Slash Data, there were around 7 million Python developers in the world in 2018, while the number of people who code with C# reached 6,2 million. The other data source, a survey conducted by Stack Overflow, demonstrates that 41.6% of all developers know how to work with Python and 32.3% how to work with C#. Engineers, experienced with Python and C# are a part of the Ideamotive development team. Contact us to hire the best experts in the industry!

Clever budget planning is as important as the design of features and services. Even the greatest ideas are limited by the number of resources, both financial and time, available. Both Python and C# belong to one of the cheapest technologies to develop with. According to the Stackoverflow Developer survey 2020, the median salary of Python engineers reached $59k per year vs $57k of engineers, who work with C#. Since Python operates with a syntax close to a natural language, development with this language is quicker and requires less time. For this reason, Python is a perfect solution for start-up companies that are still testing their product.

Now, when we are familiar with both languages let’s compare them. 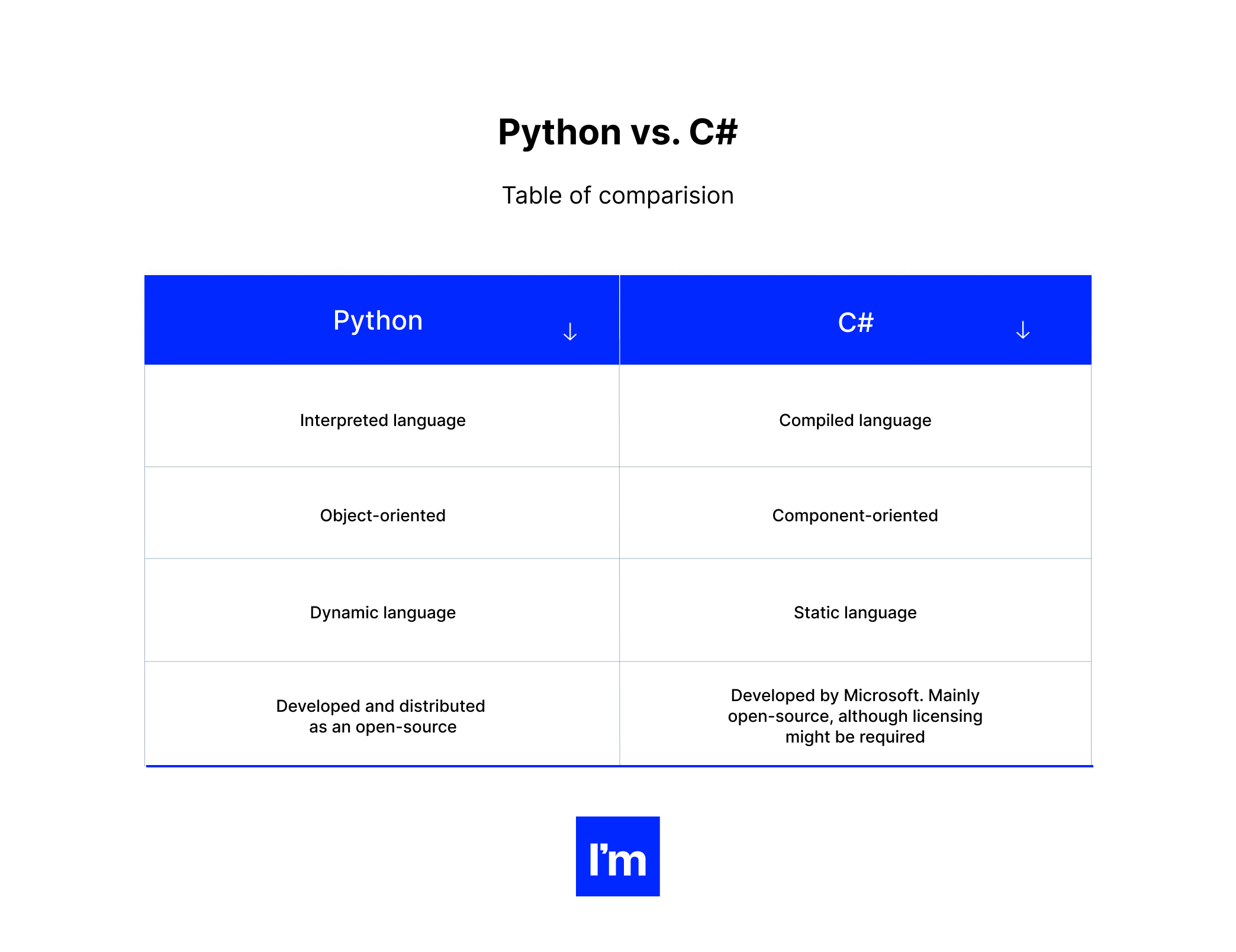 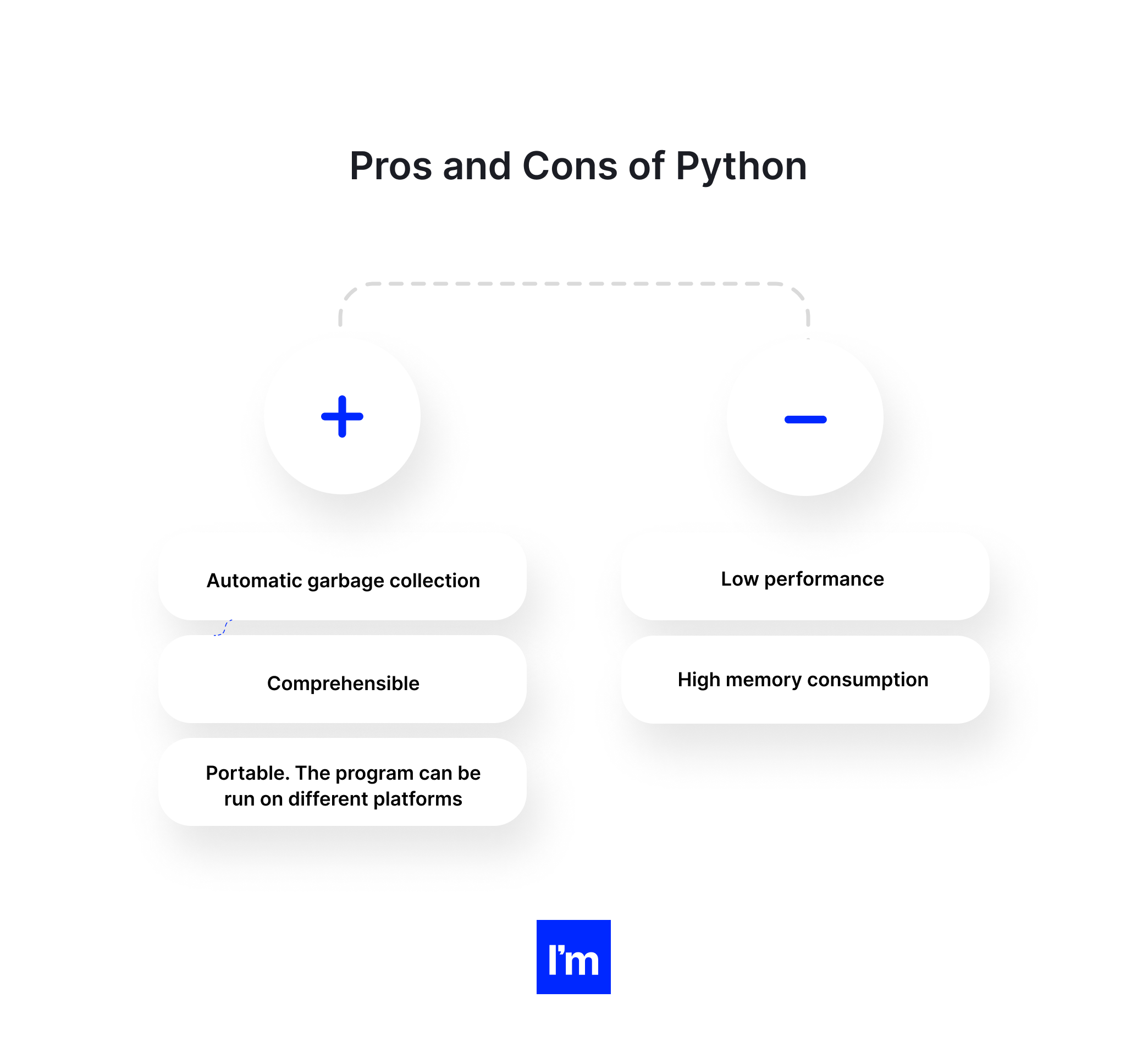 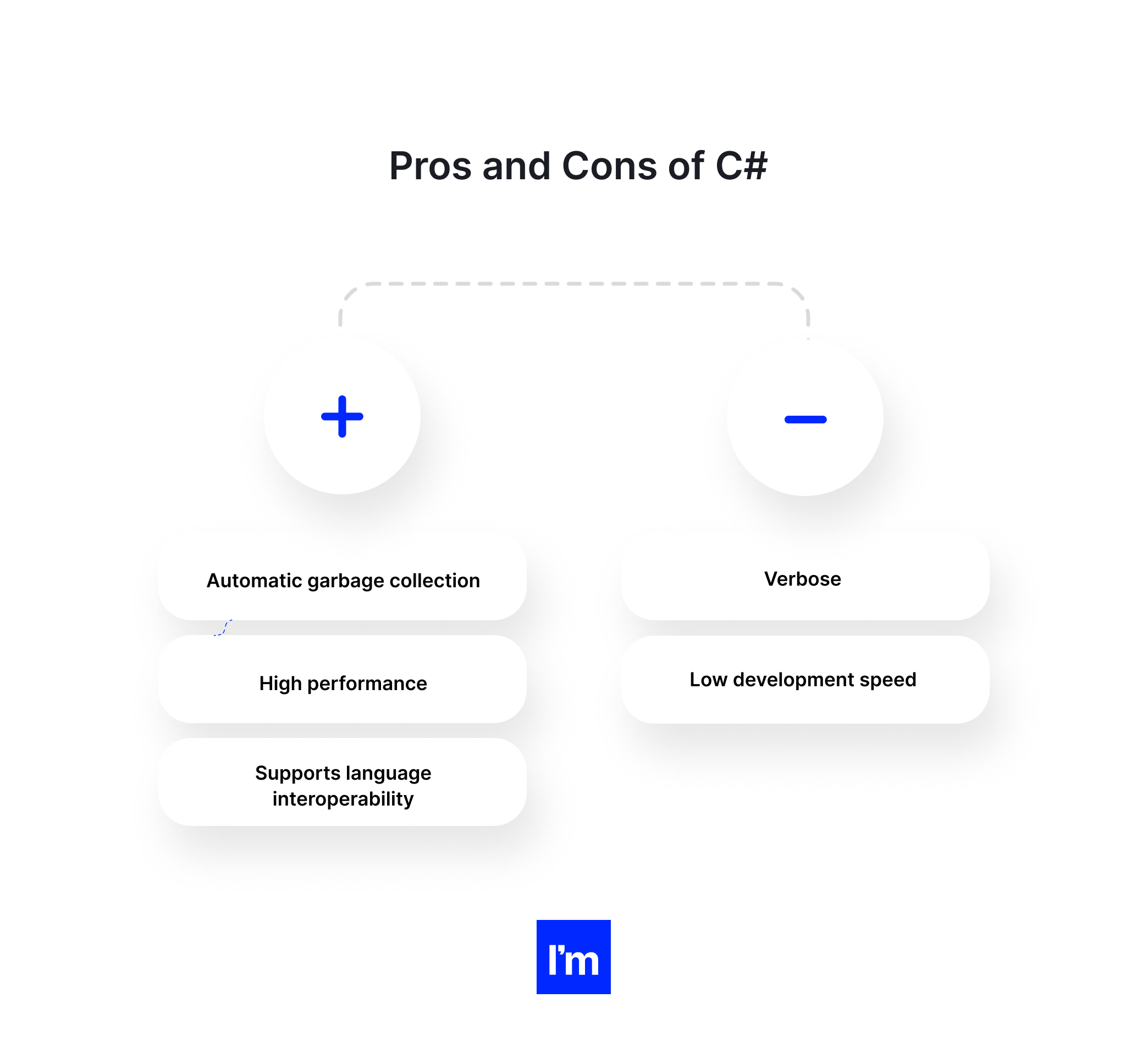 When to Use: Python vs C#

To know the theory of language’s design and features is good, to see the language in action is better. Let’s have a look at the real-life examples of where Python and C# are applied. 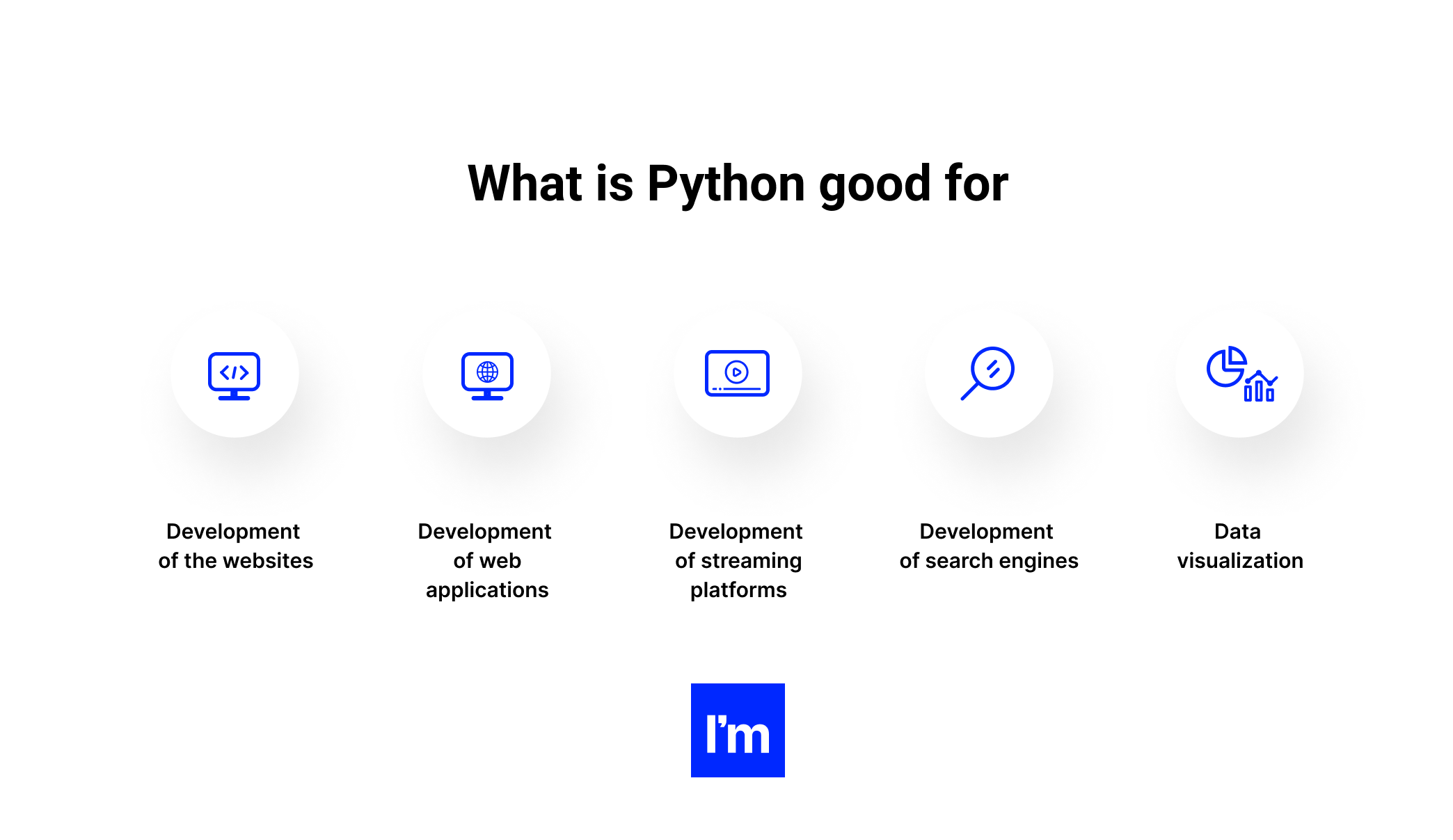 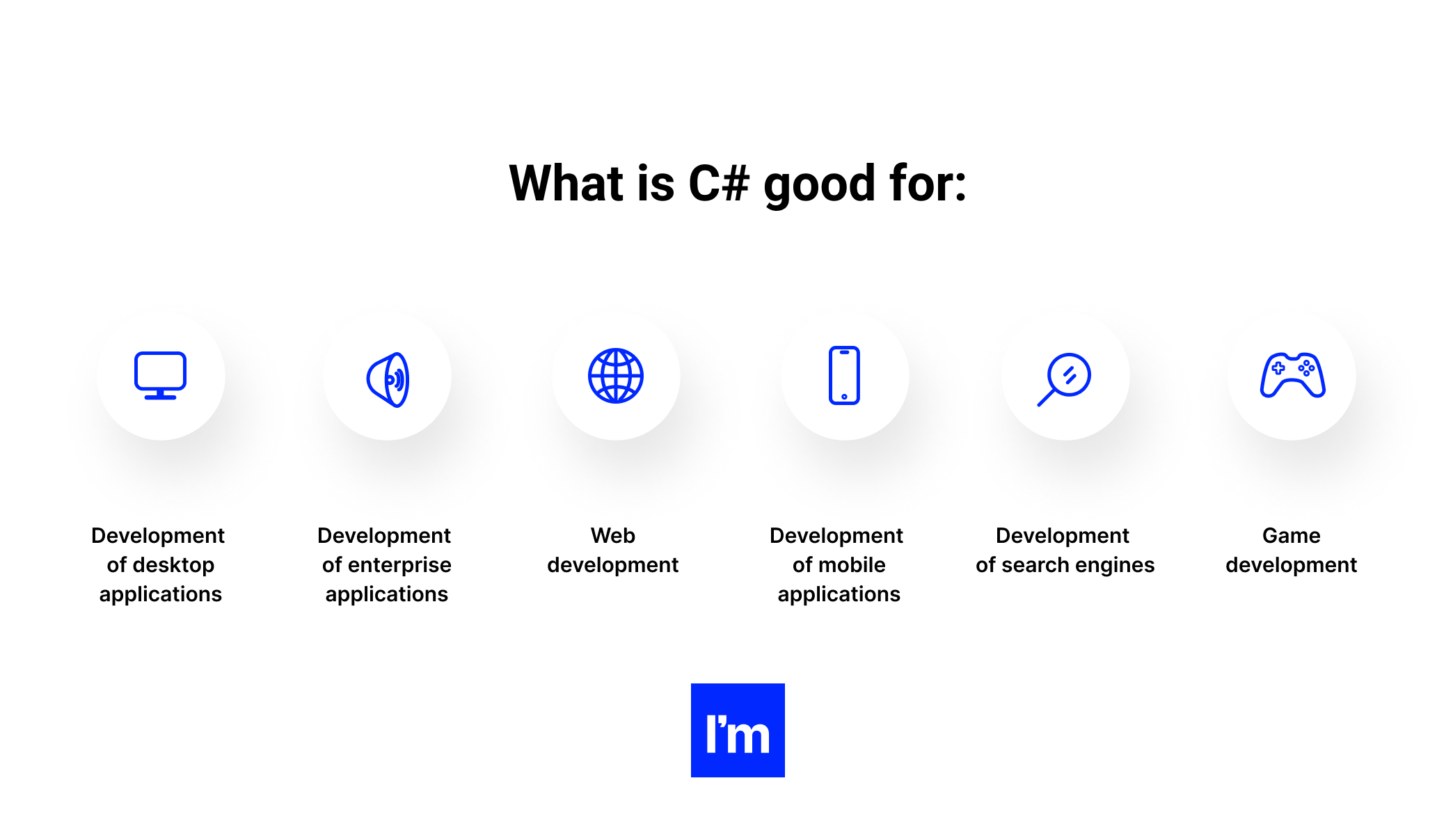 To learn more about C# read our Ruby on Rails vs C# comparison.

As you have seen, both Python and C# are mature technologies with their own benefits and weak sides. Python is good for MVP products and startups, although it also performs well with enterprise-scale applications like Instagram. C# is a strong and powerful tool for the development of applications with high requirements for performance and stability. Not sure which technology fits your product the best? Consult your product with us. We can provide you with technical consultancy and experts skilled in both technologies, matched with your product and your industry.

The State Of C# Development

Why Is Python a Great Choice For Data Analysis?

What Is Python And Why Should You Consider Using It?