We use technical and analytics cookies to ensure that we give you the best experience on our website. You can learn more about it in the Privacy Policy page.
Accept & close
Looking for top C# Developers? They are just a few clicks away.
Hire C# Developers

Programming languages are like wine – some turn to vinegar, but the best improve with age.

Two decades after its creation, C# continues to be one of the most widely used programming languages. Also stylized as C Sharp, it was created by Microsoft. Sun (later bought by Oracle) did not want Microsoft to make changes to Java, so Microsoft chose to create their language instead.

From the ground up, C# was designed with simplicity and readability in mind. C# was inspired by Java, C, and C++. By integrating incipient concepts such as value types, properties, and events, the programmers took the best components of them and innovated further. C# was released alongside Microsoft Visual Studio, where programmers could build their Windows-based software.

It’s a popular opinion that C# was supposed to be just a clone of Java. However, starting from version 2.0, C# moved in a different direction and much faster. For instance, lambda expressions were years ahead of Java.

C# quickly won the hearts and minds of developers. It is a very mature language that evolved significantly over the years. Microsoft had built C# only for Windows applications. But now it’s used for the console, android, ios, and machine learning software.

C# is one of the most popular programming languages, along with Ruby on Rails and Java. We looked through development and market data that may prove useful in your future programming endeavors. In this article, we’ll give an assessment of the current state of C#, walk you through C# trends, and determine the main directions for C# in 2022.

What is C# used for?

With C#, you can maximize the return of investment because it could be employed to create almost any kind of app. As a general-purpose language, C# allows you to build:

Here are examples that demonstrate the language’s reliability:

In the gaming world, developers prefer C#. Game developers use Unity to build video games.  It has more than a billion active users. C# integrates seamlessly with the Unity engine.

ASP.NET could be used to create websites, web applications, and web services. It uses C# as a programming language.

The WiX toolset lets developers create installers for Windows Installer, the Windows installation engine. It was written in C# and C++.

C# continues to be a natural choice of both smaller companies and global corporations. Some of the biggest names in tech have been created using C#, including Adobe Photoshop, Mozilla Firefox, MySQL Server, and Thunderbird.

You get a lot of reusable libraries and frameworks available at your fingertips as soon as you adopt C#. These two concepts are important but sometimes confusing.

C# was not designed in isolation but as part of the overall .NET framework project. In the beginning, C# was exclusively reserved for Windows developers because the .NET framework was tightly coupled with the Microsoft operating system. But this is no longer the case. In November 2020, .NET and .NET Core converged in .NET 5 which can run on multiple operating systems including Linux and Mac.

Blazor is the latest addition to the .NET technologies and probably one of the most exciting. A web assembly compiled version of a trimmed .NET runtime is used to run your C# code natively directly in any browser.

With Xamarin, you can build programs and apps in C# for operating systems such as iOS, Android, macOS, and Linux.

NuGet is the de-facto package manager for .NET. It provides 232K+ unique packages instantly available to be consumed inside your C# applications.

C# has a rich class of libraries that make many functions easy to be implemented. The Base Class Library provided by the .NET framework is a massive help in the hands of C# developers.

C# in 2022 can tap on a vast collection of types to implement the most common tasks like using the file system, sending and receiving data over the network, performing math and crypto operations, and much more.

The current version of C#

Like all programming languages, C# continues to evolve. Over the years, C# has not lost its readability while adding more concise structures and tools. Microsoft is developing it following four key strategy guidelines:

C# 9 was released in 2020. It continues three of the themes from previous releases: removing ceremony, separating data from algorithms, and providing more patterns in more places. Concepts such as records, with-expressions, improved patterns matching, improved target typing, and covariant returns were introduced.

There’s a separate GitHub repository for the development of C#. According to C# development leaders, there’s a vast amount of feedback to be analyzed and taken into account. Everyone can propose new features by creating issues on the official C# Github page. All notes from official design meetings are publicly shared with the community.

"C# 9.0 is trying to take some next steps for C# in making it easier to deal with data that comes over the wire, and to express the right semantics for data, if you will, that comes out of what we call an object-oriented paradigm originally," says Mads Torgersen, lead designer for the C# programming language & a program manager on the .NET team at Microsoft.

Every year, we see how the ranking of programming languages fluctuates. Will C# be still popular in 2022?

For many years, C# is holding a good position in almost every index. Looking at the data provided in the "Developer Economics: State of the Developer Nation, 20th Edition," report, we can see that C# in 2021 has ticked up a notch in popularity, overtaking PHP.

"C# lost three places in the rankings of language communities between Q3 2019 and Q3 2020, but it regained its lead over PHP in the past six months after adding half a million developers," the report states.

C# is ranked 5th on the TIOBE index for July 2021. The TIOBE Programming Community index is an indicator of the popularity of programming languages. The ratings are based on the number of skilled engineers worldwide, courses, and third-party vendors. 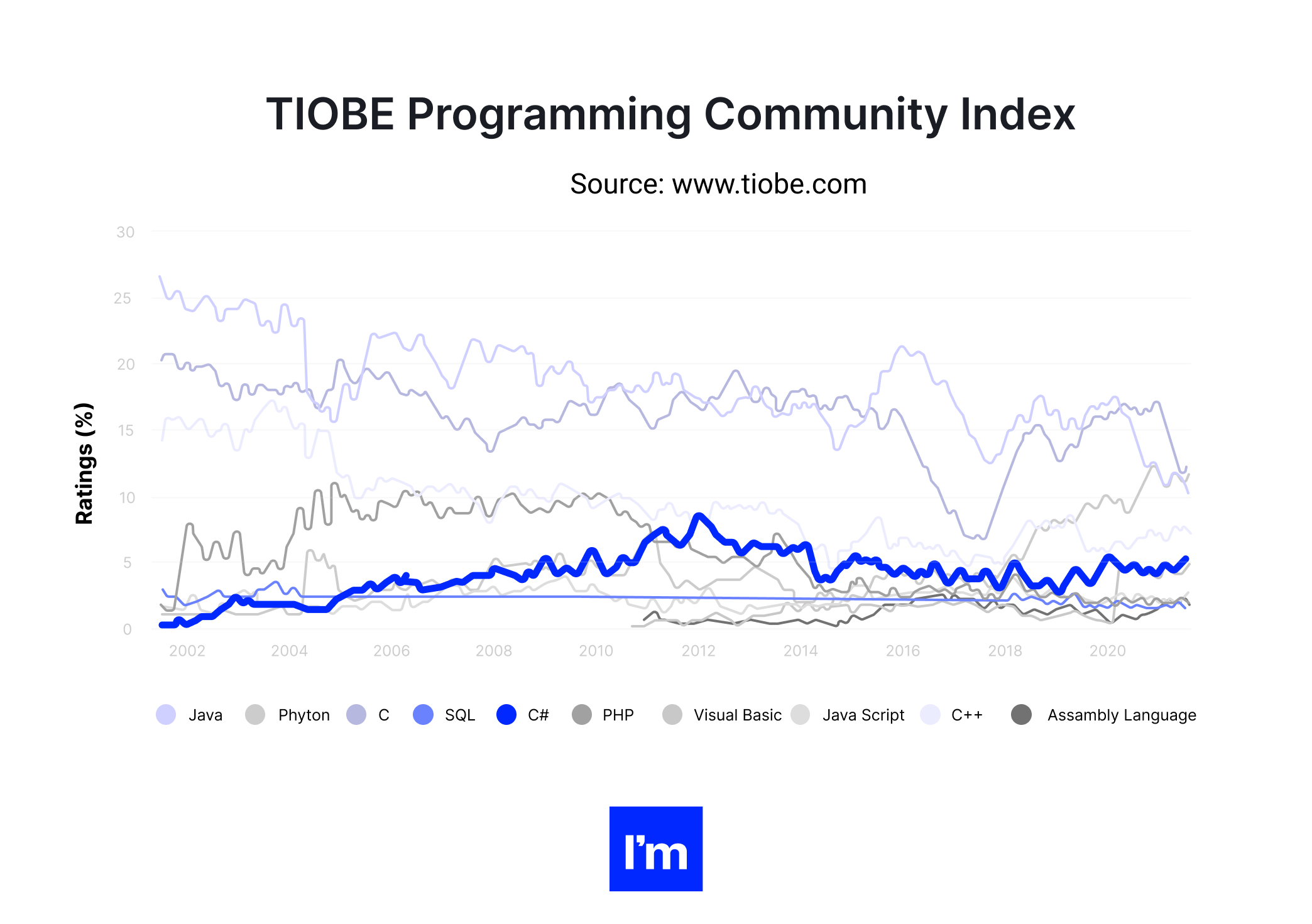 C# has 4th position at PYPL index. PYPL Popularity of Programming Language Index is created by analyzing how often language tutorials are searched on Google. 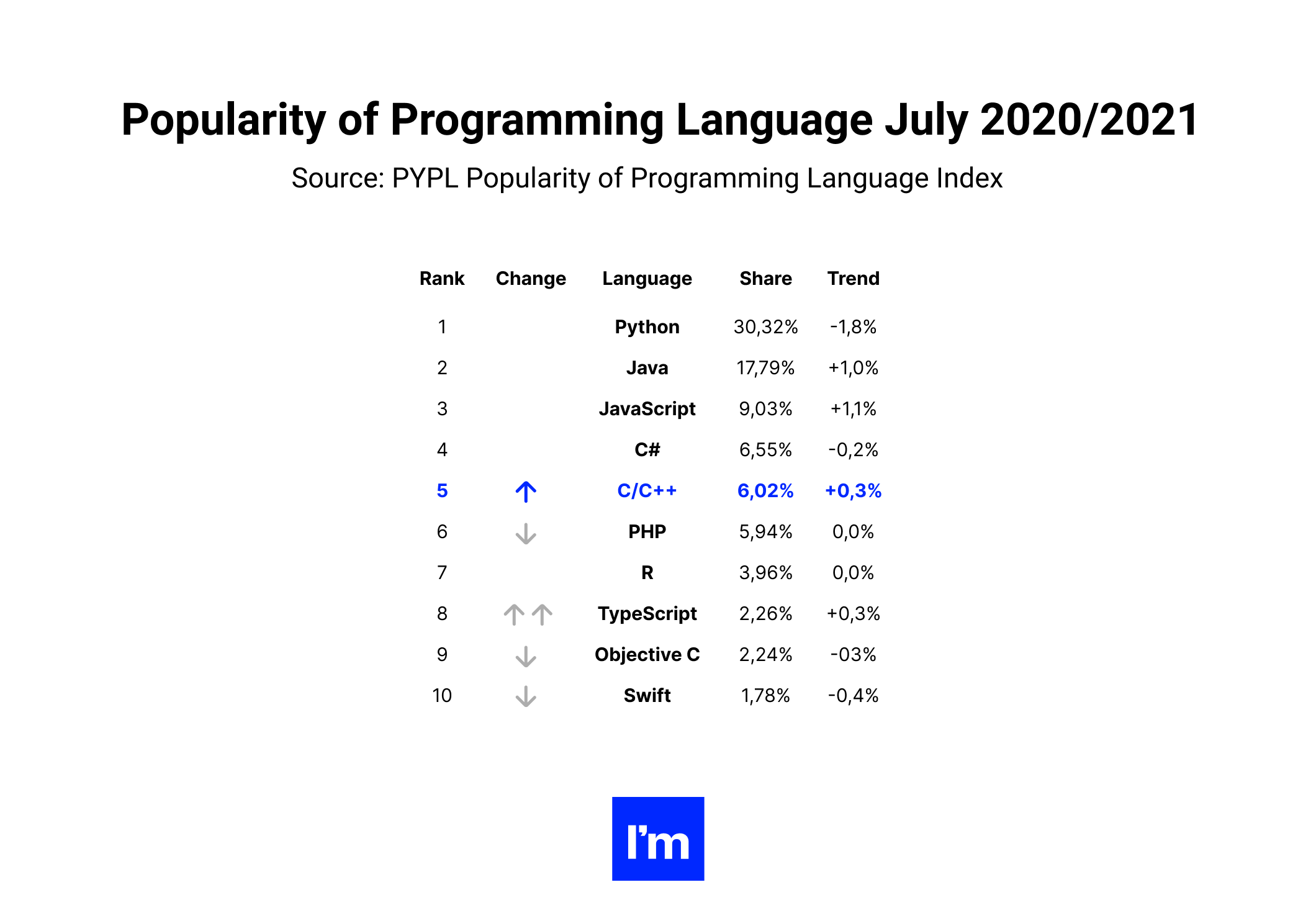 On GitHub Language Rankings, it holds a place at the #9 position in the second quarter of 2021. 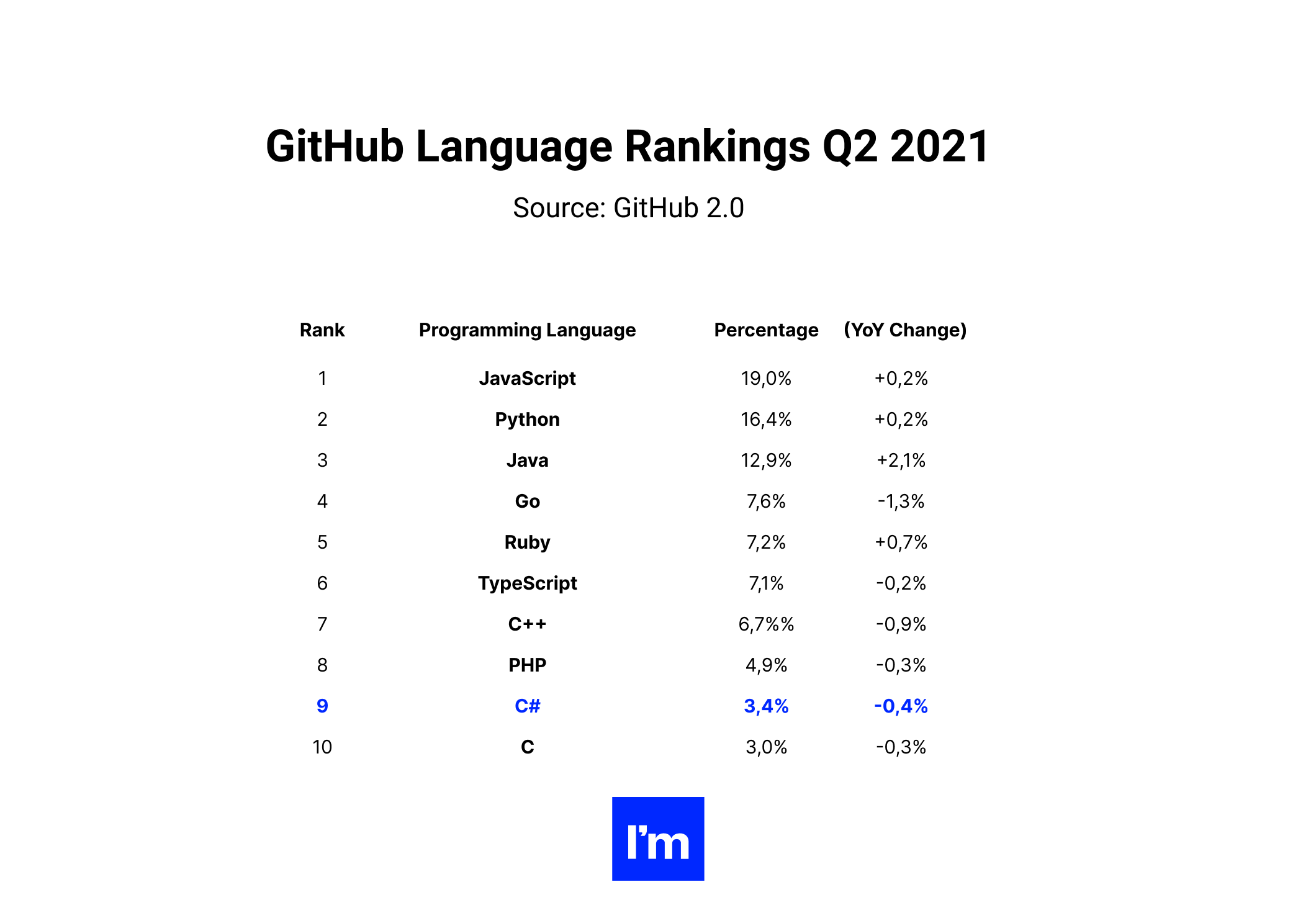 The State of the Octoverse, C# became the 5th most popular programming language in 2020. Here is a recap of the languages that dominated over the years: 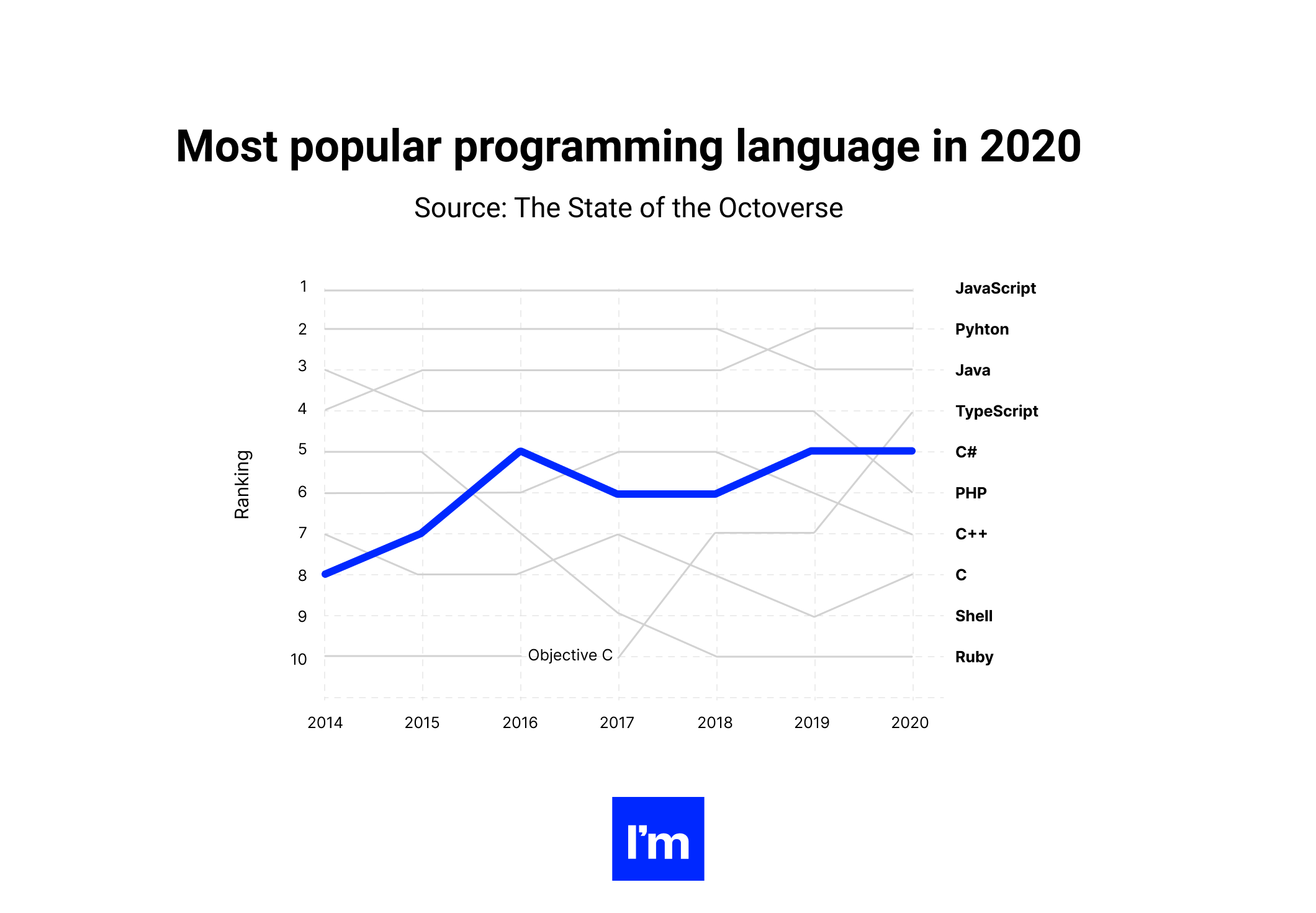 Source: The State of the Octoverse

C# is one of the fastest evolving programming languages. C# 9 that was released in 2020 introduced significant improvements to support modern workloads and application types. Code in the latest version of C# is much cleaner than the previous ones.

According to Stack Overflow Developer Survey 2021, C# is used by 29.81% of professional developers. 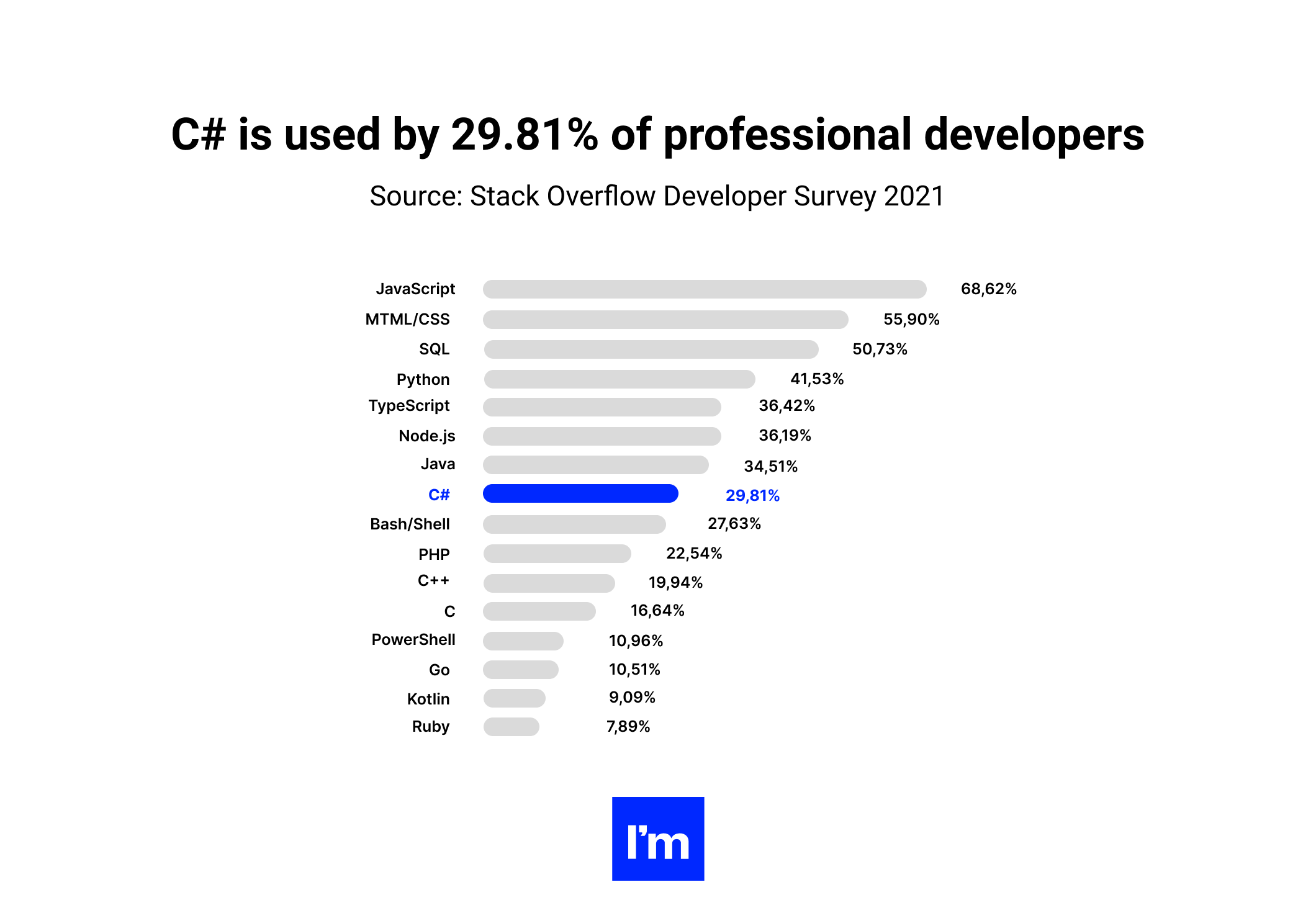 Here are some of the notable trends that this survey uncovered:

HackerRank estimates that roughly 1 of every 5 hiring managers is looking for a developer that can code with C#.  And SlashData estimates that there are 6.5 million C# developers. 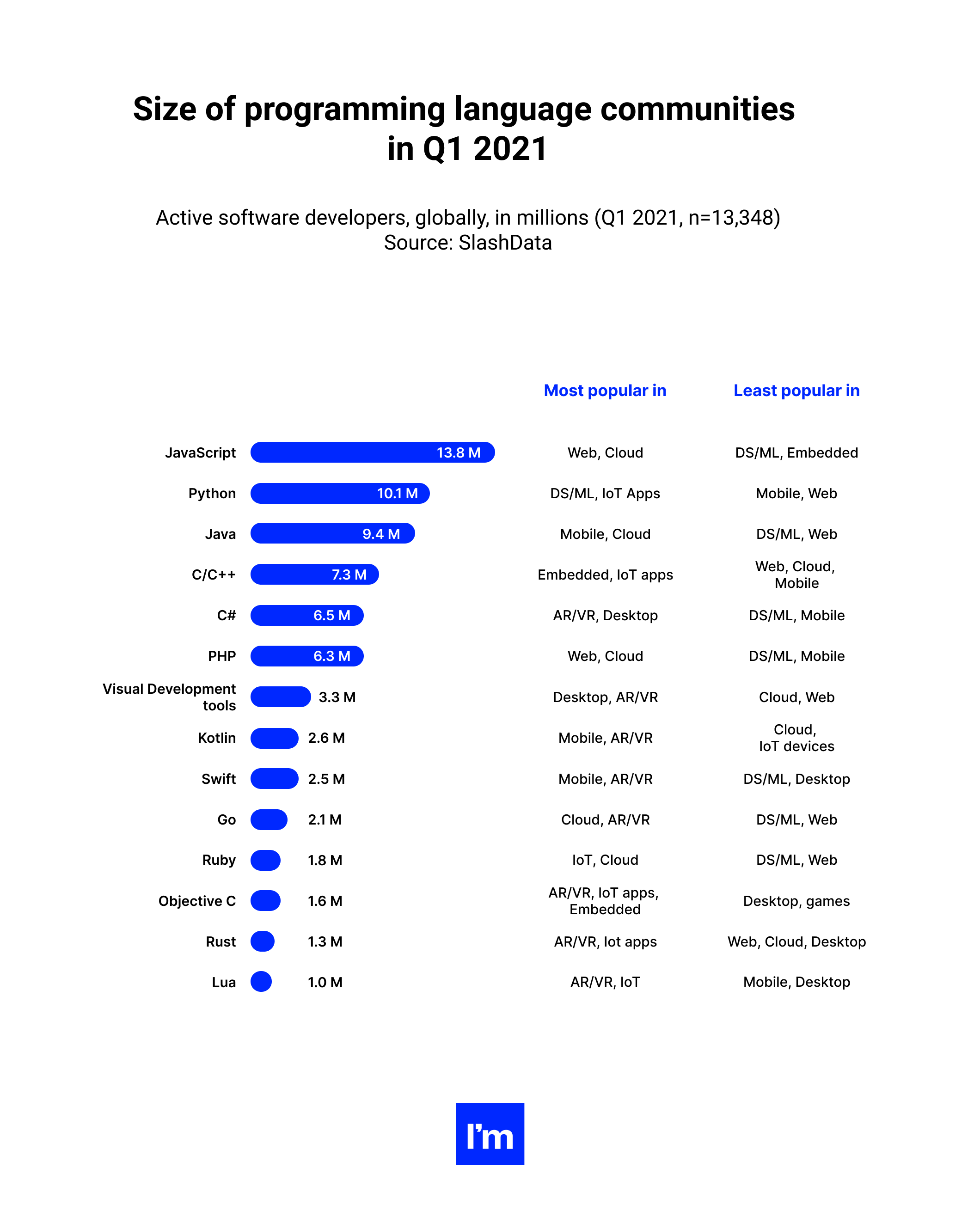 What is the future of C#?

It’s worth paying special attention to C#, whether you choose a tech stack for a project or a career path. In the following video, C# experts describe the forces that influence and shape the future of programming languages and explain how they fit into C#:

Is C# a good choice?

Let’s look at some of the advantages and disadvantages of C#: 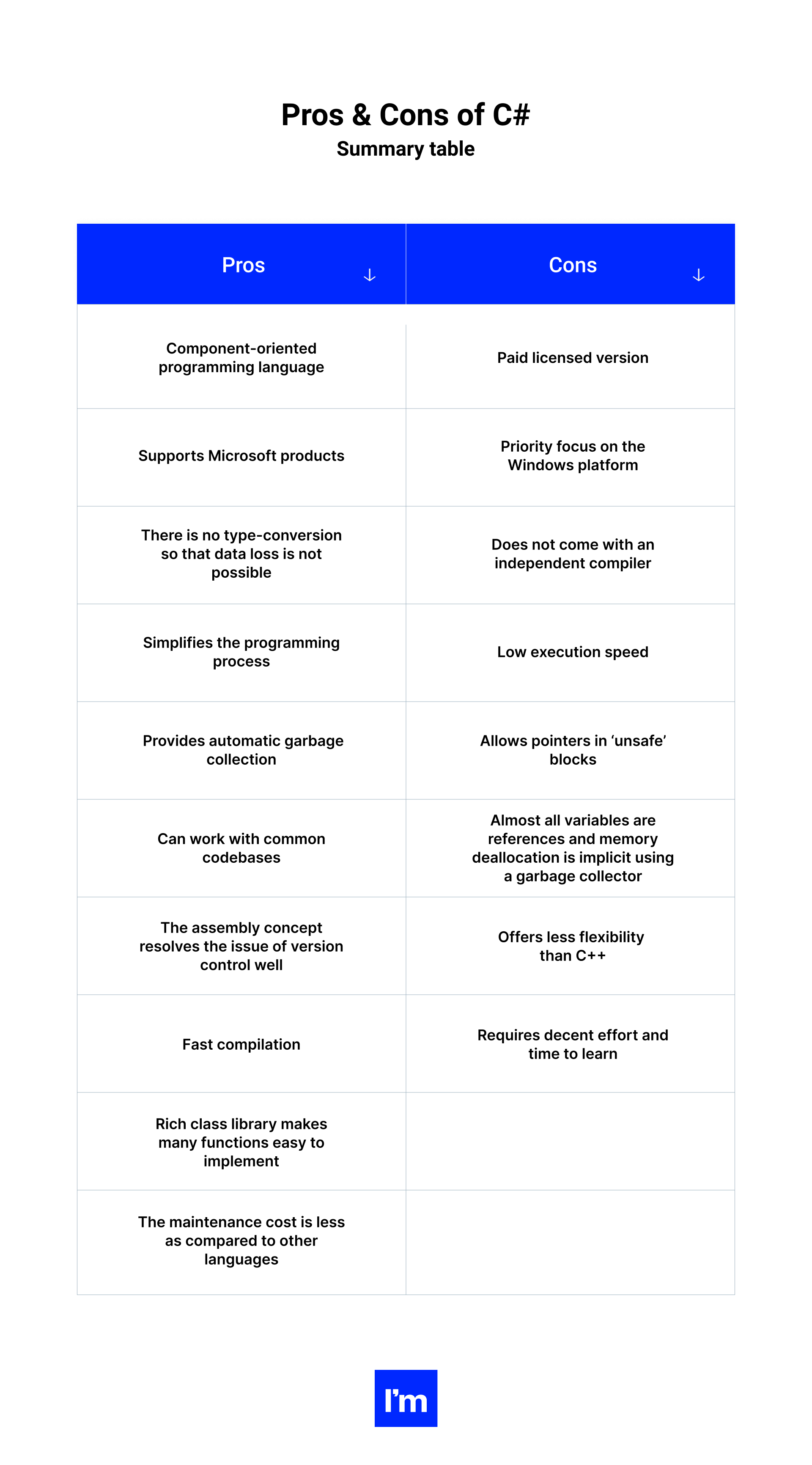 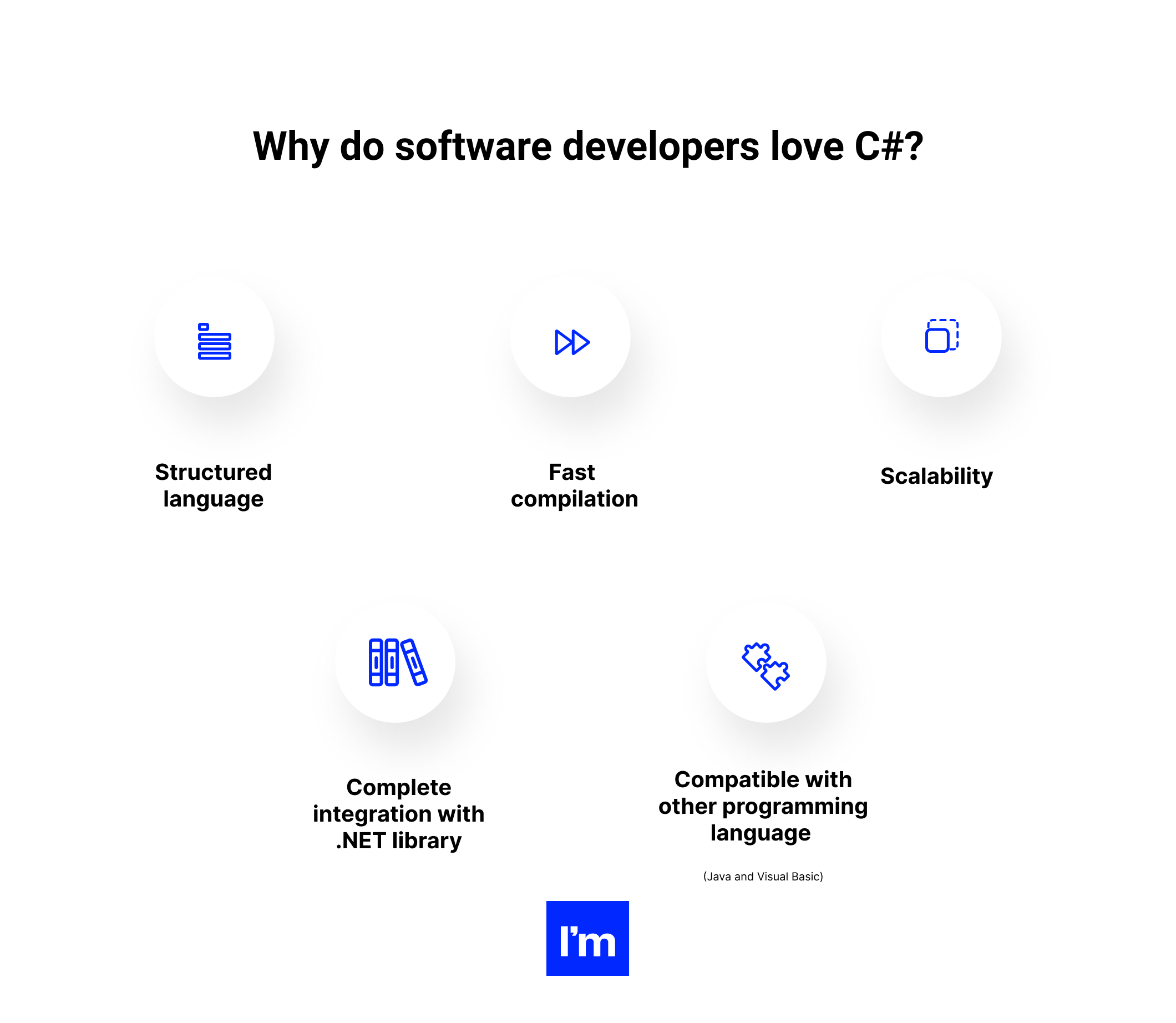 C# language can be used to build all kinds of software targeting desktop, web, mobile, gaming consoles, TVs, Internet of things, and cloud applications. It is arguably the best option if you want to build a pure Windows app. Because of this, it's really big in the enterprise world – software that runs inside large corporations.

Why use C#? C#’s main selling point is the ease of use and ability to speed up development. For example, if you need to code a calculator program, it could take several hours to over a day with C++. With C#, it’ll take about 30 minutes. C# pre-writes all the boiler-plate code, so you can skip all the boring things and get straight to coding the actual program. That is the power of C#.

Why not use C#? Some programmers refuse to use C#, with complaints of it being too slow, not allowing access to the computer’s hardware, and being tied to Microsoft’s .NET framework.

However, C# is in high demand in top software companies around the world. And with extensive support from Microsoft and an active community, C# is bound to continue being an important player in the market.

Looking to hire C# developers? There are dozens of C#, C/C++, .NET, Ruby on Rails, and other devs in our network. We will make sure to connect you with talents perfectly fitted for your industry and company culture.

C# vs JavaScript: Which Programming Language Is better For Your Needs?