We use technical and analytics cookies to ensure that we give you the best experience on our website. You can learn more about it in the Privacy Policy page.
Accept & close
Looking for top software development talents? They are just a few clicks away.
Hire Ruby Developers

Developed in the 1990-s Python and Ruby belong to the latest generation of high-level programming languages. Both coding systems contain words from the natural language and are rather easy to understand and learn. The clean and concise syntax fastens the development process and allows a quick release of prototypes or complete products. The support of such frameworks as Django and Ruby on Rails makes both languages convenient for the development not only of websites but also of web applications.

A great similarity between Python and Ruby makes it hard to choose the right technology for your IT product. Read further to find a detailed comparison of Python vs Ruby.

What Are Ruby and Ruby on Rails?

Ruby is a programming language designed by the Japanese engineer Yukihiro "Matz" Matsumoto during the mid-1990s. The inspiration for the development of a new language came from the insufficient experience of applications such languages like Perl and Python. In Matsumoto’s opinion, Python was not a true object-oriented language.

The main features why Ruby is beloved by the best web developers are:

In 2005, a new framework called Ruby on Rails (RoR) was released. Built around the MCV pattern, it provided developers with such concepts as views, models, database migration, and controllers. It allowed using such web standards as JSON and XML. The design of the database interaction queries is empowered by a powerful library called Active record. The library automatically transforms Ruby code into SQL query and in such a way reduces development time.

The latest version, Ruby on Rails 6.1, was released on 9 December  2020. The changes touched Action pack, Action mailer, Active storage, and Action text. Check our blog post on State Of Ruby On Rails Web Development for details.

Among businesses that chose Ruby for the development of their commercial application such companies as Airbnb, Kickstarter, Hulu, Shopify should be mentioned here. As it was counted by Builtwith.com, the total number of currently running websites developed with Ruby on Rails reaches 927,412. More than 15,000 RoR-based websites attract the attention of over 1 million visitors each.

Python is the programming language created by the Dutch engineer Guido van Rossum in 1991. The development of a new language started as a hobby project that could keep van Rossum entertained during the Christmas season. The aim was to create a language with a simpler syntax than Java, C++ & C had.

The key features of Python that catch the attention of experienced Python developers are:

The spheres of Python’s application include data analytics, data visualization, development of APIs and GUIs, finance, search engine optimization, and web development. Since the language is relatively easy to learn, it became popular among full-stack developers. Hiring an experienced full-stack developer, who is familiar with both front-end and back-end is a good idea for startup projects that are short in finance. In recent years, the appearance of such Python libraries as Keras, TensorFlow, and Scikit-learn made the language convenient for Machine learning projects.

Examples of applications built with Python include Instagram, Spotify, Netflix, Uber, Pinterest, and others. According to Builtwith.com, the total number of currently running websites using Python reaches 168,026.

The popularity of Python as a web-development technology is supported by a convenient framework named Django. The framework was released in 2005 by the developers of Lawrence Journal-World daily newspaper. The aim was to create a tool that will ease the production of a database-heavy high-traffic website within a strict deadline. Right from the release day, Django became the main competitor of RoR.

Python vs Ruby for Web Development

Now, when we are familiar with the main features of Python and Ruby, let’s compare both languages in detail. The criteria for the comparison will be:

The popularity of the programming language is the first factor to consider while choosing the technology for your product. The appreciation among the IT community is the indicator of languages’ reliability, convenience, and performance.

Comparing Python vs Ruby, a number of studies show that Python belongs to one of the most popular programming languages while the ability to code in Ruby is a rather exotic skill.

According to the TIOBE Index for June 2021, Python is the second most searched programming language in the world. Python has never been ratted lower than third place in 20 years in a row from a long-term perspective! Moreover, Python was awarded the Programming Language of the Year title four times: in 2007, 2010, 2018, and 2020. In contrast, Ruby has much worth ratting and holds only the 13th position in the list. It keeps only one Programming Language of the Year award received in 2006. The splash of interest in Ruby is explained by the release of Rails a year earlier.

The other proof of Python’s popularity among the IT community is the result of the Stackoverflow Developer survey 2020. The survey shows that Python is used in more than 44% of IT products while Ruby is applied only in 7.1% of cases.

A great feature that allows reducing the development time is the support of libraries - a collection of pre-combined code. Both languages have a vast pool of available pre-written solutions. At the moment there are over 137,000 Python libraries and more than 166,000 Ruby Gems available for download. Python libraries are stored and managed by the tool called Python Package Index (PyPi). Ruby’s gems may be downloaded from Rubygems.org. The bandwidth of the mentioned hosting service is provided by Fastly. The financial costs of supporting RubyGems are covered by the crowdfunding project named Ruby together.

The development of new libraries depends much on the efforts of the community. For this reason, a greater community means the higher chances of the programming language to meet the business’s requirements. The data provided by Github shows that Ruby on Rails has gathered a bigger crowd of devoted developers. The total number of active RoR contributors reaches 4,263 while the number of Python’s Django contributors is twice smaller. Only 2,058 people contribute to Django on a regular basis.

In-person communication with other experts plays a great role in developers’ professional growth. The need for such communication is covered by annual conferences.

The biggest convention of Ruby enthusiasts is the one founded in 2001 RubyConf, which happens every fall while Python programmers share their ideas and concerns at the PyCon.

The PyCon hosts demonstrations, discussions of the code of conduct, tutorials, keynote speeches, lightning talks, summits, and many more. Such groups as Django Girls and PyLadies have their sessions as well. At the conference of 2021, more than 100 events happened with over 23,000 unique views. Also, the conference hosted 49 virtual booths including sponsors, startup row companies, and open-source projects. 2650 attendees participated virtually including the "benevolent dictator for life" of Python Guido van Rossum.

The lack of developers capable of coding in Ruby results in a higher price of production. According to the Stackoverflow Developer survey 2020, the global median wage of Ruby developers reached $71k during the last year and made it the top-5 most expensive IT technology. The cost of  Python developer’s services is 15% smaller compared to Ruby. The global median wage of a Python engineer is only $59k which makes it one of the cheapest solutions.

Good Ruby’s execution speed is counterbalanced by much higher consumption of memory. The execution of the n-body program will take 22,968 of memory for Ruby while Python will take only 8,076.

Optimal use of computer resources depends on effective multi-threading. A multi-threaded program includes several parts that can run concurrently. Each part handles a different command at the same time. Examples of such tasks are reading multiple files, handling several web requests, creating multiple API connections, etc. The design of a multi-threaded program is a difficult task. It requires a lot of experience and good knowledge of a subject from a developer. The common pitfalls include race conditions, deadlocks, and starvation.

Both Ruby and Python provide instruments that facilitate the development of multi-threaded programs although the tools are different.

In Python, parallelism is delivered by the threading package within the API to create and govern threads inside. The execution of threads is scheduled by the operating system. The mutual execution control is implemented through Global Interpreter Lock (GIL). Although GIL is a great tool to ensure that no function accesses unstable data, it may be a source of deceleration.

In Ruby, the thread may be created simply by calling Thread.new. The appearance of exceptions usually doesn’t interrupt the program’s execution. The thread will die quietly without stopping the program or reporting an error. The number of active threads may be restricted by thread pools. The exclusive access to the shared resources is locked by the Mutex class. The mutex may be turned on or off by the developer’s decision. The deadlocks are handled with the condition variables. The development of a multi-threaded program in Ruby may be sped up by the implementation of such gems as parallel, workers, or concurrent Ruby.

The majority of security risks of Python- or Ruby-based applications originate from elements written with other languages. For example, the application may be breached with such tricks as SQL injection or parsing XML files. The other weak spots are Cross-site Scripting (XSS) and authentication.

The safety of both languages is enforced by the efforts of the community. Ruby participates in the bounty program at HackerOne. Reported vulnerabilities are fixed rather quickly. A new patch is released at least every six months. The vulnerability of Python applications may be tested with such community-developed security scanners as Python Taint, Tinfoils, Pyntch, and others. 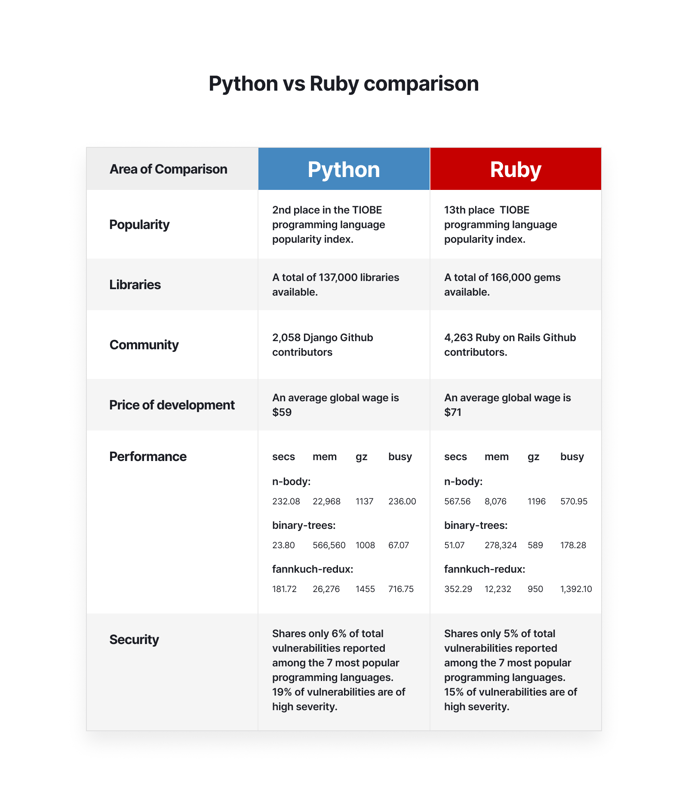 In 2021, both Python and Ruby celebrate almost a 30-year history of development. Both are good solutions for designing a backend side of the web product, especially when an experienced backend developer guides the project. The appearance of such frameworks as Django and Ruby on Rails relieved the adaptation of both languages to the modern demands of web application production. The variety of the available libraries allows releasing the application rather quickly. The safety of the product is guaranteed by the community-developed security tools.

As both languages are good and effective development tools, it is hard to say which technology in the competition of Python vs Ruby is a leader. The resolution requires the knowledge of the final product’s detailed demands. If you are not sure which language you should choose for building your product, consult your requirements with us. We can provide you with technical consultancy and put together a team of experts skilled in both technologies, matched with your product and your industry.

Why And How Should You Use Python For Data Analysis? [Data Scientist Perspective]