We use technical and analytics cookies to ensure that we give you the best experience on our website. You can learn more about it in the Privacy Policy page.
Accept & close
Looking for top software development talents? They are just a few clicks away.
Hire Offshore Developers

Serverless vs Microservices: What Should You Choose For Your Product?

Building an application is exciting but it does require a lot of planning. If you want your software to last and stay relevant for years to come, choosing modern technologies that complement your project is a good start.

Microservices and serverless are two major concepts in cloud computing as of now. They work well with the efficiency of the application and make changes and scalability much easier and quicker.

Learn more about these microservices and serverless architecture, when to use serverless vs microservice approach, what kinds of software they will fit into, their pros and cons, and their impact on the product overall.

Microservice is a decentralized architecture pattern where an application is broken down into a series of independent functions (services) that can work and communicate together through APIs. Every microservice has its own database, libraries, and templates, and they are tested separately as well.

It is often compared to monolithic architecture. In the latter, all features are one: they are coupled very closely and run as a single function. In microservices, every component is more or less independent and you do not have to run an entire application for one feature.

For example, let’s take music streaming services: profile creation, music search, playlist creation, music playing are all different functions and you can turn them into a series of microservices. If you need a new feature (karaoke mode, for instance), you just create a new microservice and connect it to the rest of the system.

What Is a Serverless Model?

Serverless is a model where the third-party cloud provider takes care of the server themselves. Developers have to worry about the code, and everything else is done by the server provider - security patches, load balancing, capacity management, scaling, logging, and monitoring. You can run either the entire application on a serverless model or a part of it.

The server is being used only when the application is used: as soon as the app code is triggered, the server allocates resources to it and draws them back when the app is no longer active. The app owner pays for the time when the app runs only.

Cloud providers can offer either Backend-as-a-Service (BaaS) or Function-as-a-Service (FaaS). BaaS offers pre-built features so that the developer takes care of the front-end only. It is rarely used since it offers limited control and customization. FaaS, on the contrary, is more flexible: the developers write back- and front-end and just run it on the distant server.

FaaS allows you to build an application as a set of functions. Every function has a purpose and the trigger that activates it. The function is usually short-term and it is deactivated as soon as it is not used anymore – it can not run continuously.

If we compare microservice and serverless function, the difference will be the following: 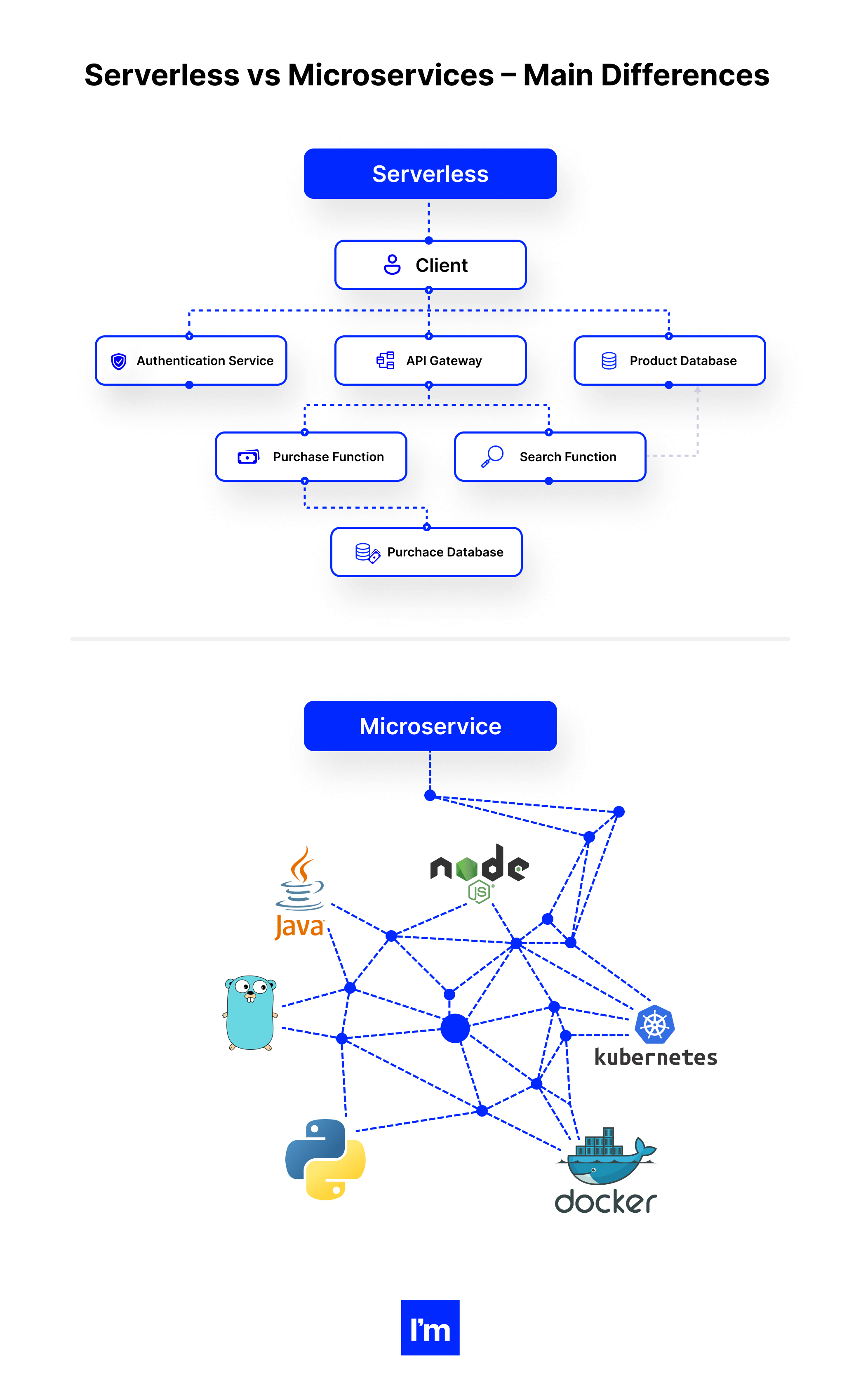 How to Approach Them? What Roles and Resources Are Needed?

When it comes to developing software with microservices, the biggest part is the planning. You will have to figure out what microservices to make and their functions and how they will interact with each other through APIs. You will need a software architect for this.

Regarding the team, you will have to find developers and testers that do actually know microservices. The language and framework do not matter really because microservices can be used in whatever technology you prefer. However, most often microservices are built with the following technologies: JS/TypeScript, Java, .NET, and Python. Experience with data projects and the cloud is usually required for these kinds of projects as well. Developers work better in small, cross-functional teams with microservices.

According to business strategists, the costs of microservices are higher during the development process but cheaper in the long run. If we compare it to a monolithic architecture, the maintenance will cost you less since you can add new functions quicker and with no trouble, and if one microservice is down, the rest of the app will keep running, unlike in the monolith.

The microservice projects usually take less time than monolith because small teams can work on different functions independently at the same time.

If we talk about serverless, you will need to find a good service provider (the most famous being AWS Lambda, Google Cloud Functions, Microsoft Azure Functions, and Cloudflare Workers), choose between BaaS and FaaS, and write down all the functions and their triggers.

As for the development team, you will need to find people who can work with the service provider of your choice and have solid JavaScript or Python skills.

The quickness of development is also one of the quickest: many companies use this technology exactly to launch their new apps in no time.

When to Use Serverless vs Microservices Architecture?

There is no answer to what is better – microservices or serverless – because each project is its own. Moreover, they can be combined too.

Let’s take a closer look at use cases of both.

Microservices are widely used by such great enterprises as Netflix, Uber, Airbnb, etc. They allow them to quickly scale and these companies are always growing. As for startups, funding consultants claim it to be not the best idea: the upfront costs are too much and microservices are mostly used for big applications that become difficult to maintain. Small and lightweight apps can be easily maintained as a monolith.

Serverless is a great opportunity for web and mobile development in startups since they are low-cost and work perfectly with lightweight applications. Enterprises, on the other hand, should be more thoughtful when it comes to serverless since its use cases are limited.

Pros and Cons of Serverless vs Microservices Architecture

Unfortunately, there is no one perfect technology – otherwise, the world would have been a happy ultra developed place. Each technology has pros that you can leverage for your project and cons that you need to be ready to tolerate. Let’s take a look at both.

Even though they are relatively new, both technologies have attracted many companies. It is hard to say no to quick development and scaling after all. 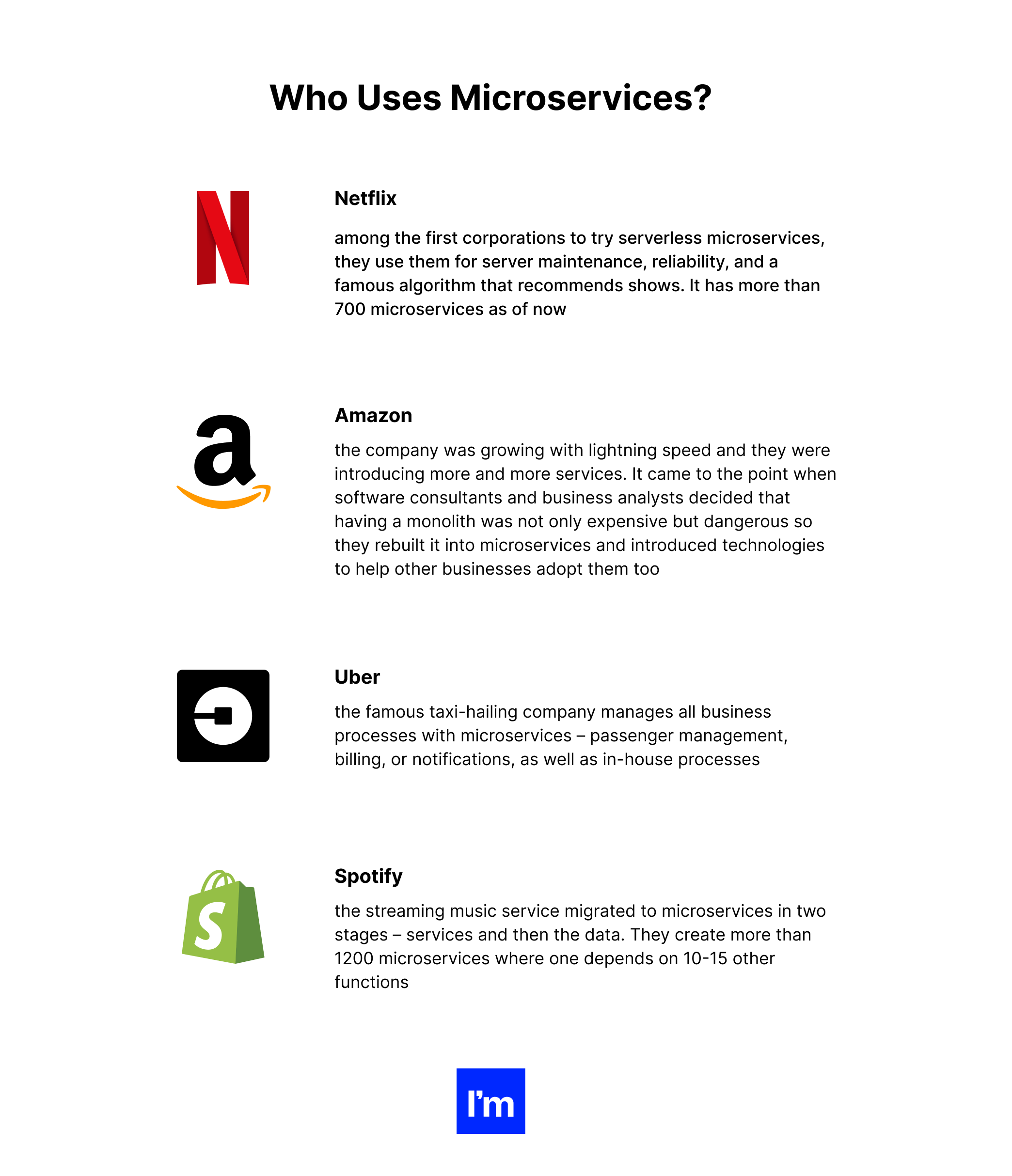 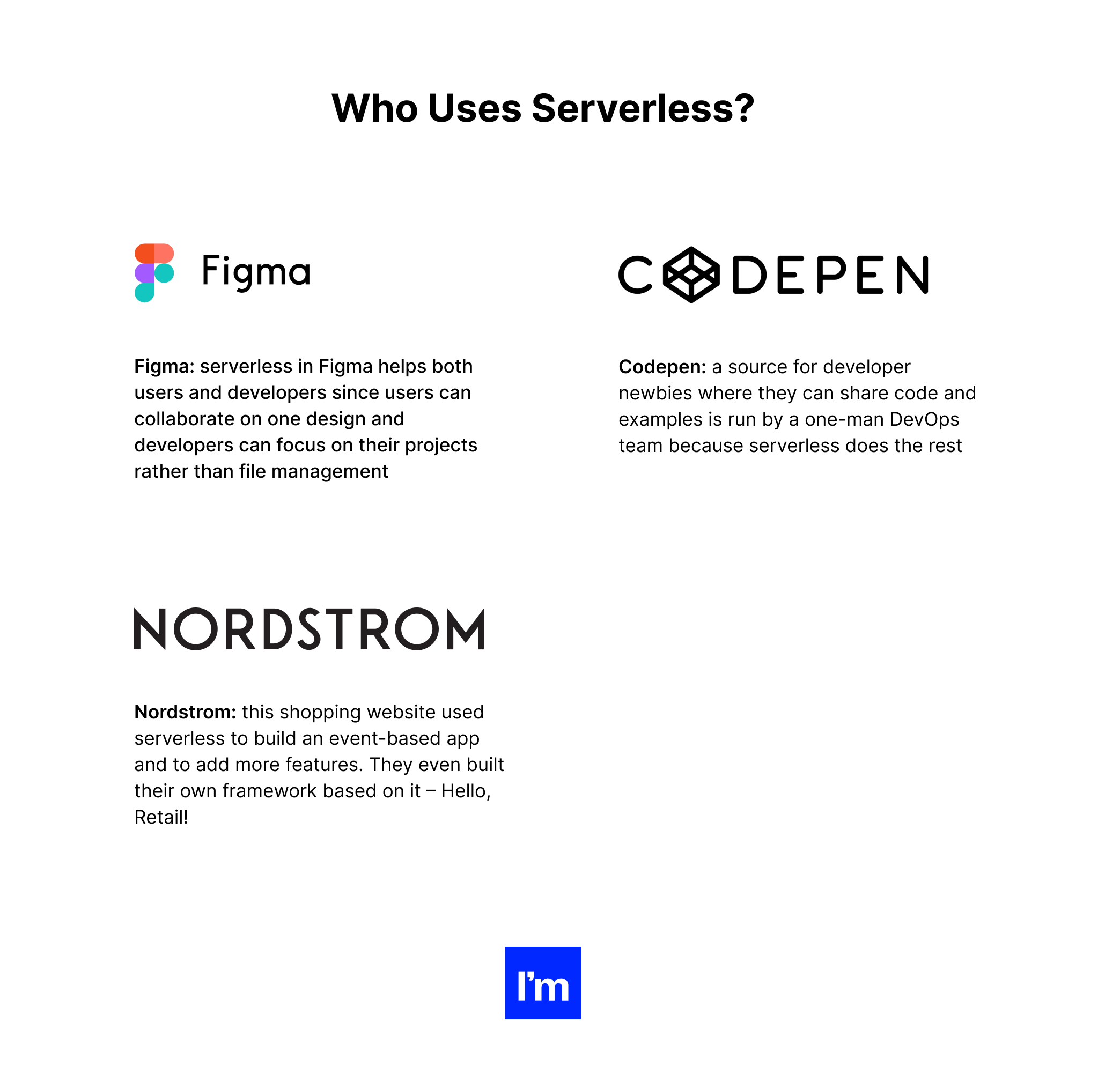 Are you looking forward to building your next application with these two technologies? Do not hesitate to reach out to Ideamotive! We can help you find experienced professionals in serverless and microservices to get you started.

The State of CEE IT Outsourcing and Offshoring Report

IT Outsourcing For Product Owners vs For CEOs

Our broad network of battle-tested software developers, designers, managers, and business consultants is here for you.