Microservices is an architecture type where you do not build one big monolithic application but create a collection of small services, functions that work on their own and connect with other services through protocols.

The main principle of microservices is service-oriented architecture. It means that they are standardized, barely depend on each other, can be called from anywhere, designed to live long, and are of adequate size and scope, etc. It also should be relatively easy to add initially unplanned services to the application.

This type of architecture has blown up recently.

According to the O’Reilly report on microservices, 61% of organizations have used microservices for a year or more and 28% used this practice for at least three years. At the same time, 54% of survey respondents indicated that they used them most successfully.

It is not surprising since organizations started to create more complex applications that fulfill numerous functions at once. Monolithic applications are not the best decision for this type of app and, therefore, companies started to actively utilize microservices. Thus, they were able to fit all the enterprise functions and operations in one app rather than using numerous, often incompatible apps. Such big companies as Amazon, Netflix, Uber, and eBay already benefited from microservices.

Long story short, we have compiled everything you need to know about microservices in Java.

Is Java Good for Microservices?

You may be asking yourself: why did we choose Java when it came to microservices? This language is one of the top-five technologies for microservices, alongside Golang, Python, .Net, and C++.

The main reason why Java has become our personal top choice is its annotation syntax. The more difficult the application is (and microservice applications are usually extremely complex), the easier language should become. Otherwise, you will be simply lost in the tones of unreadable code and opportunities to break something. Java’s syntax is very easy to read and, therefore, you can focus on building a wide system rather than figuring out the code.

Java also offers numerous helpful resources for microservices: user Interface, model components, ability to connect to back-end resources, such as Java EE standards like JAX-RS for APIs, JPA for managing data, CDI for dependency injection, and lifecycle management. There are also some frameworks that speed up the back-end development process: Spring Boot, Dropwizard, Restlet, and Spark.

The state of Java is also very stable, with it being one of the most popular languages in the industry. Consequently, you are unlikely to face a labor shortage.

All-to-all microservices and microservices with event-driven architecture are the most popular types of Java microservices that serve the needs of different projects. If you are not sure what architecture type would work best for your product, it’s better to contact an experienced software development vendor to assist you.

Java Microservices - Impact on the Product

Java microservices have a big impact on the business: you can reduce costs and drive a better user experience.

We do agree that microservices need a significant upfront investment: you have to find web developers who can work with microservices and deal with organizational investment in small cross-functional teams. However, it is nothing compared to a long-term return of investment. The costs of maintenance will go down since you can avoid exhausting tests of the whole application after an update. It is unlikely that the work of the entire enterprise will come to an end because one part of the application fails.

You will also be able to improve the quality and speed of your software through microservices. Microservices is an investment into the future: such applications do not grow outdated and with tons of technical debt as quickly as monolith applications.

Microservices have fewer downtimes, are easier to scale, offer many automation tools, and work faster which creates a better user experience and smoother operations across the enterprise. You can also quickly add services on demand if your employees ask so.

When to Use Microservices in Java?

As with everything in life, there is no solid answer to the question of whether microservices are good or bad. The better question to ask is whether this architecture type is suitable for your business.

Microservices are a go-to solution for big companies who need to fit numerous parts of the enterprise within one app and easily scale. If you have a complex project, developers with microservice knowledge, a big tech team, and enough budget, microservices will change your life for the best.

However, some experts say that you need a really good reason to opt for microservices. Microservices need a lot of upfront investment in time and costs: you have to spend some time to figure out the network, and microservice apps are usually more expensive. The ROI is definitely great but it will only work if you are a big business operating in the long term. Therefore, it is not the best solution for startups and small businesses since they do not need a complex solution and do not have the budget and time to deliver it.

You may think that startups are the ones who will need to scale and so microservices are a must. It is logical but you can not be sure that someone will actually want your product or that you will be moving in the exact same direction. Uber, for example, started as a limo renting service and now they are the most famous ride-sharing company for all classes. 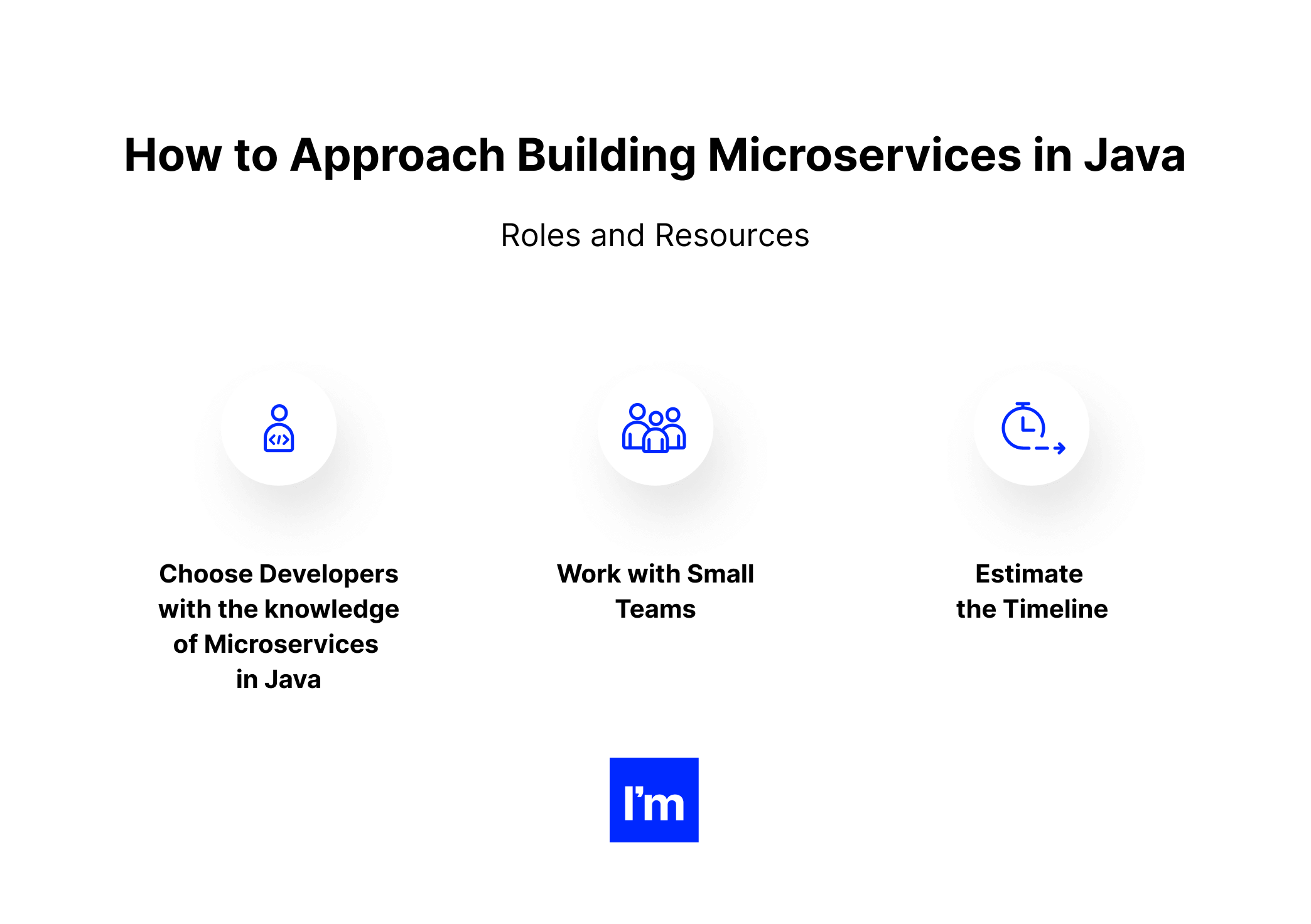 If you decide that microservices in Java will work for your business and you want to reduce costs, then keep on reading! Here are the resources and tasks that you will need before starting the microservice Java project.

Choose Developers With the Knowledge of Microservices in Java

Microservice developers have to be proficient in Java, have experience with cross-system communication and interfaces, use DevOps tools and containers, and be able to implement continuous integration. Overall, you will need a software architect who can plan the microservices, a project manager who can control the team and reduce your need to get involved, developers (depending on how many microservices you have), and quality assurance.

You have to build teams around services that you want to implement since every microservice is kind of an application of its own. You may even find that some services should be done with other languages rather than Java. So make sure you formed the teams thoughtfully and gave responsibility to the experts.

On average, every service takes no more than two weeks to write. Multiply the number of services in your plan by two and you will get a rough estimation of how long it will take to build the entire application.

Unfortunately, it is impossible to estimate even roughly the budget of the project without contacting development companies or recruiting personnel. The costs will depend on how many developers and QA you want to hire, your desired timeline, and the number of microservices that you need.

If you need to find Java microservice developers or estimate the budget and plan of your microservice project with software consultants, do not hesitate to reach out to Ideamotive! We have extensive experience with microservices implementation in Java and also have professionals on our team who specialize in other modern technologies including Kotlin, Ruby on Rails, etc.

Microservices is a must hard skill for Java developers so it is unlikely that you will struggle with the development team. According to the Stack Overflow Developer Survey, Java belongs to the top-5 popular technologies, with 36,35% of respondents and 34,51% of professional developers using this language. The shortage of talent is unlikely with this language. The situation would be entirely different if you decided to go for microservices in Golang, for example. 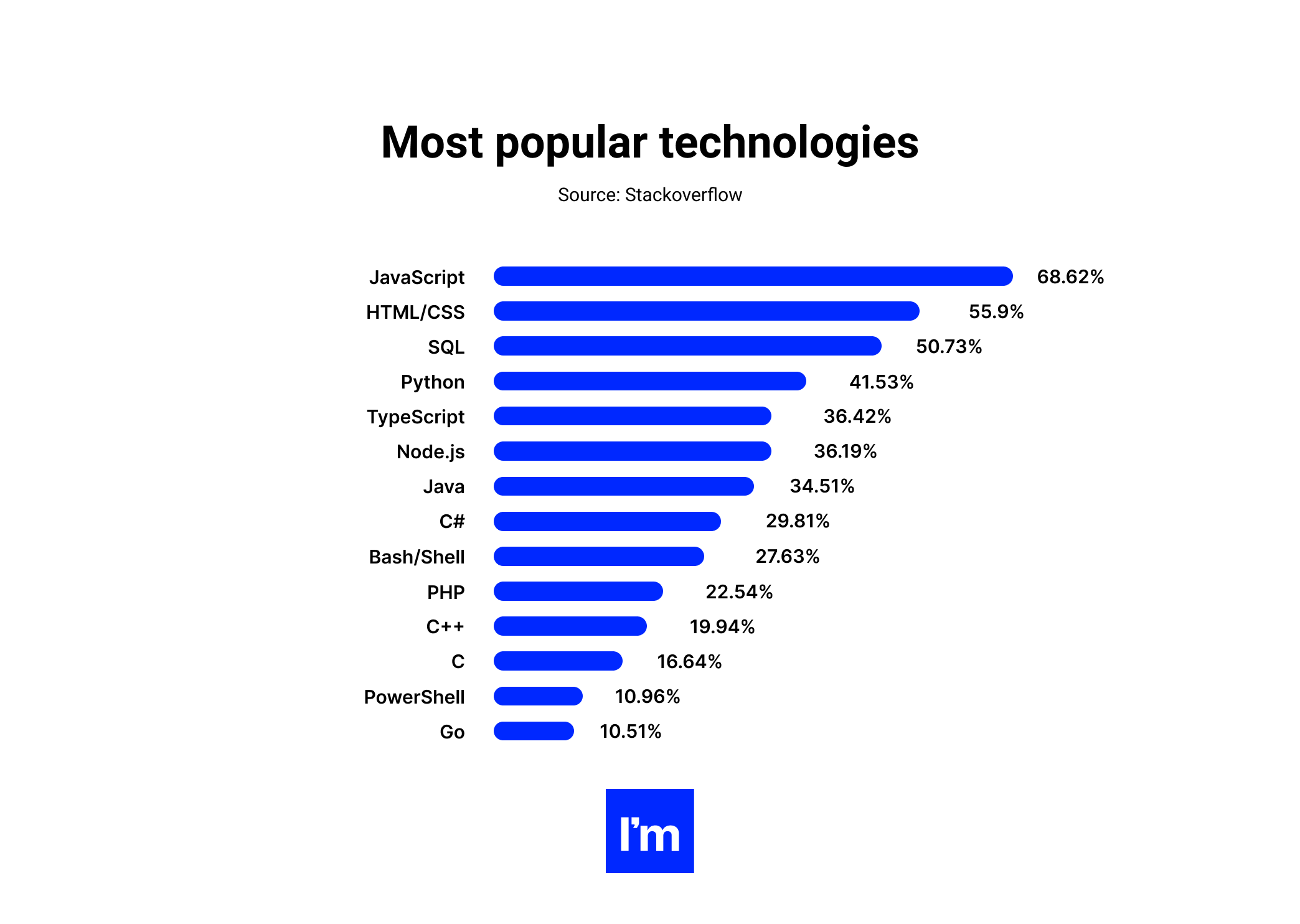 As we have mentioned earlier, microservices give companies the opportunity to mix different languages in the app. Let’s take a closer look at 4 big enterprises that use mostly Java microservices in their tech stack, and in some cases also add the Python and Java combination

Spotify is the most popular music streaming service at the moment, with 365 million monthly listeners. Over 90 autonomous tech teams and 900 developers work on 810 Spotify’s microservices.

They have migrated from the monolith application after it became too difficult to maintain. They created a strategy where one microservice depends on just 10-15 other services and were able to migrate without downtimes. Thus, Spotify is a great Java microservices example.

Lyft is a popular taxi aggregator in the US with 12,5 million people who drove with it in Q4 2020. The company is a good Java microservices example as they migrated from a monolith application to successfully utilize newer microservice architecture.

They have more than 200 microservices and the number is constantly growing. They needed it since the monolith was too slow and delivered a bad user experience. Lyft was able to move without downtimes and improved the efficiency of customer ride routes and response times by 2.3 seconds.

eBay is one of the world’s most well-known marketplaces where you can buy and sell art, fashion, cars, etc. It has 159 million users worldwide. They had a Perl application back in 1995 which later transformed into a C++ monolith application and later into more than 1,000 microservices. They are written in different languages, with Java prevailing. They have individual teams for every microservice.

DoorDash is an American food delivery service that is considered a great Java microservices example. It has become one of the biggest on the US market, delivering 45% of orders in 2020. DoorDash had to move away from monolithic databases and applications because testing times were too long and the system was very brittle. The migration process turned out to be a big challenge.

However, the results were worth it. They have 50 microservices now and continue to build new ones, have expert teams for every side of the business task, and, consequently, microservice and enjoy better stability and lower risk of entire app crashes. They are still facing some tasks in their move but the majority of work is behind and all the critical activities were performed already.

Microservices can become a hit solution for your business, with improved speed, faster scaling, and reduced downtimes.

If you want to fully benefit from this technology, contact Ideamotive and we’ll help you with the microservices implantation, so you can take your business to the next level. Our vast network of Java microservice developers, project managers, and quality assurance will help you define the exact steps to create microservices in Java, understand your project budget, timeline and quickly turn your app into a modern, lightning-fast microservice architecture.