6 Famous Real Life Examples to Show What is Java Used For?

What is Java used for? Most managers ask this question when they're toying with the idea of building a startup or corporation in Java. But are unsure whether building with Java will work or meet their desired specifications.

Suppose that's the case; congrats on finding this article. It's written with you in mind to answer any possible questions you might have about Java and inform you about the business side of Java development.

That said, Java is an excellent alternative for startups. But what is Java used for? This is the big question I will answer for you.

In this article, you'll get a detailed answer to the question 'what is Java used for?' and every other thing Java-related. Read on to get your inquiry and more answered.

Java, not JavaScript, is a universal, class-based, object-oriented programming language. Java is a computer platform for developing applications, and as a result, it is quick, secure, and dependable.

So, what is Java used for?

Java is extensively used for Java application development in laptops, data centers, gaming consoles, scientific supercomputers, mobile phones, and other devices. Java was created in California by Sun Microsystems, a business formed in 1982 by Andreas Bechtolsheim, Vinod Khosla, and Scott McNeally. The language was first launched in 1995 and has since developed to stay up with the trends.

What Makes Java So Popular?


The explanation is mainly in Java's historical commitment to thorough testing, upgrading, and delivery stability. A devoted community of Java developers, architects, and enthusiasts has tested, polished, expanded, and validated Java. Despite its almost two-decade roots, Java has continually grown throughout the years.

One of the major grounds for its popularity is independence. Programs can run on various computers– Java applications can run on any machine with a Java Runtime Environment (JRE) installed. Most devices, such as PCs running Windows, big mainframe computers, Macintosh computers, mobile phones, and Unix or Linux systems, will be compatible with a JRE.

Because it has existed for so long, it has been used to build some of the world's largest organizations. Banks, merchants, insurance organizations, utilities, and manufacturing use Java.

Steve Zara, a programmer for almost 40 years, shows how there is no evidence of Java's popularity decreasing. Instead, it is a developing language that blends with stability and innovation.

He further emphasizes the language's durability by stating that code created 15 years ago will run on the most recent JVMs. And will benefit from the latest profiling, native code translation, and memory management. Since Java objects have no references to data outside of itself, the Java code is highly robust.

What Is Java Best Suited For? 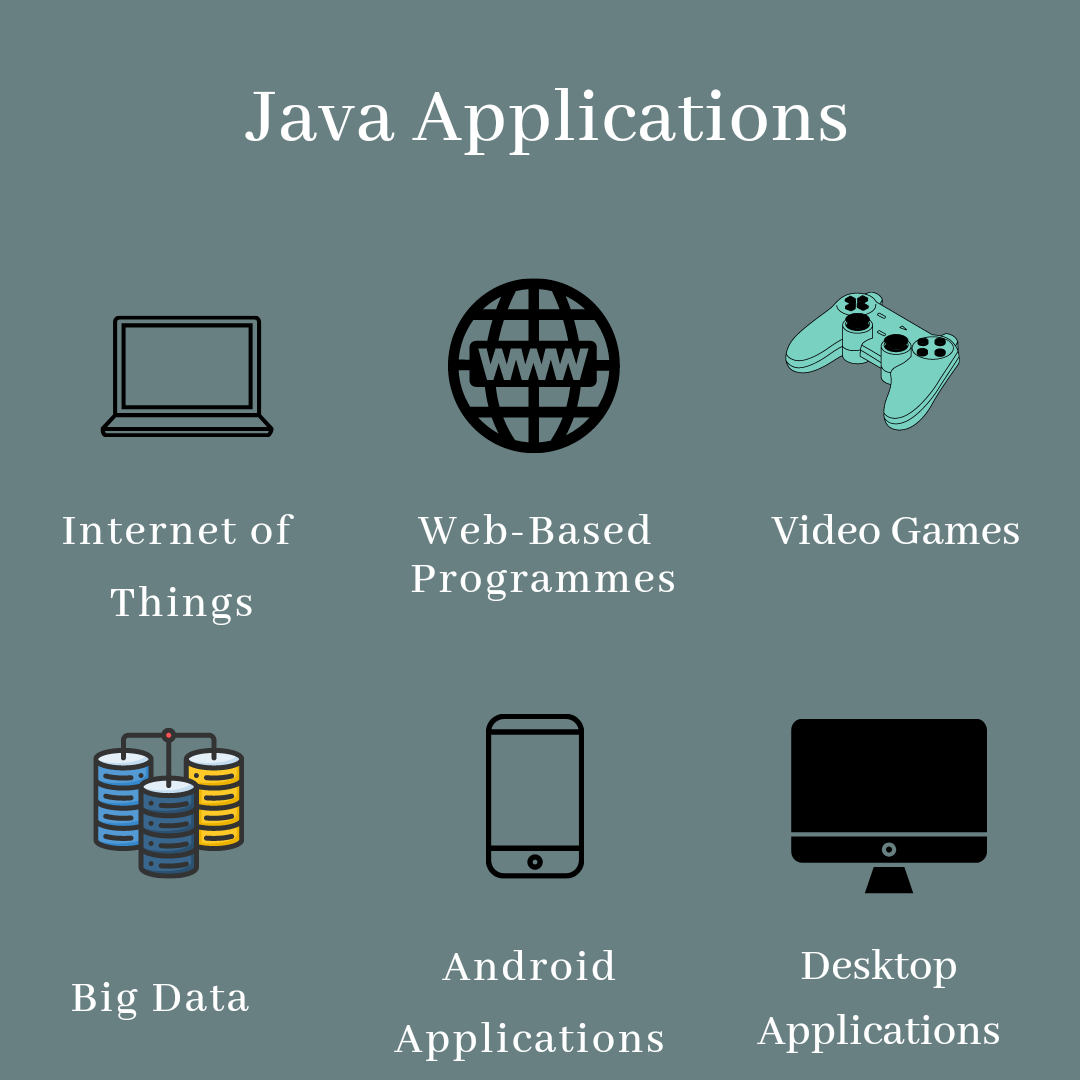 Java proficiency is an in-demand skill. But what is Java used for? Having introduced Java, now, we'll review its various uses and applications in different fields.

Let’s look at some uses for What is Java used for?

For game creation, game engines like Unity and Unreal Engine use programming languages like C# and C++. However, Java is an excellent alternative if you want to learn graphics and game creation from scratch. Also, several frameworks and libraries are available, such as LibGDX and OpenGL.

Java is a popular server-side programming language. It is frequently used to build web-based applications because it has extensive support for web development via Servlet, JSP, and Struts. Spring, Struts, Hibernate, Apache Hadoop, and JSF are the most popular Java frameworks for building Web applications. Examples of famous websites that use Java include LinkedIn, AliExpress, Amazon, and many others.

Java is the most acceptable language for running Internet Of Things (IoT) devices. It is a programming language with an independent platform due to its flexibility and mobility. And it finds applications in Web Development, Android Development, Desktop App Development, and many other things.

Thus, integrating multiple technologies with Java will be easier than with other programming languages. The ease of integration explains why you can find Java in a car navigation system and various medical devices.

Java is also well-known for its usage in developing graphical user interfaces for desktop software. A plethora of Java Structures is accessible, making GUI Application Development a breeze. These include Swing, AWT, JavaFX, Griffon, and many others. So, if you want to construct a desktop application, Java is an excellent choice.

Is It Difficult To Find Java Developers?

According to the recent survey conducted by Stackflow, Java is the sixth most used programming language globally. That says a lot! It shows that Java still reigns supreme among programmers, and the support for Java is high,

33.27% of developers said they use this programming language the most. There is still a great need for Java developers with unique skills, and this is because of the adaptability of this language. So, there is no evidence that this trend will decline, as Java experts affirm.

There are several benefits to using Java as a programming language. Let's look at some of these benefits.


Languages such as C and C++ used pointers to grant access to memory locations. Because pointers can lead to illegal memory access, this is a security issue. Java also leveraged Object-oriented programming (OOP) ideas like encapsulation, abstraction, and inheritance to boost security and prevent unauthorized user access.


Java implements the WORA functionality (Write Once Run Anywhere). Java Developers can execute Java applications developed in one system on any other that contains Java. Also, its compatibility does not rely on the operating system or hardware, making it independent and highly adaptable.

We've seen that Java offers several advantages. However, it has its drawbacks, which we will look at below.

Java occupies more memory than native programming languages such as C and C++. Also, it is slower than them because of the extra effort required by the interpreter to transform the code into machine language. The Java virtual machine (JVM) conducts several backend operations slowing the application. Because Java allows automated garbage collection, it runs continually in the backend, reducing performance.


Regarding GUI, Java is way behind. Its GUI builder is inadequate and incapable of creating complicated UI. Swing, SWT, JavaFX, JSF, and more GUI frameworks are available in Java. However, these structures are not yet mature enough to support the creation of elaborate graphical user interfaces. Modern languages with superior GUI builders include Python, R, C#, and others.


Java has no capabilities for backing up user data. It primarily focuses on data storage but does not provide backup services.

Java requires more memory than other programming languages such as C and C++. Java's memory management is inadequate, and it uses a garbage collector. Though, it harms its performance.

Examples Of Success Stories Of Some Cool Apps Made In Java

Java developers still use Java to create some of the world's most famous mobile apps. And these applications will help answer your question what is Java used for? In terms of the kind of applications it can create. Examples of these applications include Spotify, Twitter, OperaMini, CashApp, ThinkFree, LinkedIn, and Signal.

Spotify is a popular online streaming service that allows users to listen to almost any song, genre, or artist. Also, users may find podcasts on this app‌. You can access Spotify via any device, from a phone to a tablet to a PC.

Twitter is one of the most prominent social media platforms. Its tweeting services showcase how well the corporation uses Java for mobile app development. Other notable features include customized news, faster downloads, ad blocking, data saving, and private browsing. Users can write tweets of up to 140 characters and add links to related information and websites.

This software has grown in popularity among academics, students, lawmakers, politicians, and the broader population.

Opera Mini browser is a lightweight java program for mobile internet users. It increases page performance by reducing unnecessary visuals on the web page. What's more? It helps you to access the Internet more quickly, even if your Wi-Fi connection is slow.


CashApp software was previously known as Square Cash. It is a digital payment service that lets users send money to one another quickly and safely. The Java developers of CashApp for Android wrote most of the code in Java. The reason is that the Java language is flexible across devices and contains security features that can be useful when working with bank accounts.

With CashApp, the user does not have to pay anything to transfer or receive money. The app is simple to use; all you need to do is to download and sign up.

ThinkFree Office is one of the Java apps that offers a wide range of interoperability with robust operating systems, such as Microsoft. This product has the appearance and feel of Microsoft Office. One benefit of ThinkFree Office is its ability to export PDF files and use Android and Windows Mobile devices.


Signal offers secured communications services similar to IMO and WhatsApp. This app was created by combining cross-platform Javaservices, such as security and privacy-centric messaging apps. With Signal, users can send private messages, group communications, files, audio notes, videos, and photos to each other.

This software is available for both Android and iOS devices. Also, you can lock this app using your phone's password, pin, or fingerprint.

What Is The Future Of Java?

Java has a bright future and will maintain it. Java has been used to develop software for specialized applications like ERP, CRMs, internal cloud software, orchestration frameworks, IDMs, etc. So, they will keep using them now and in the future because they have taken years to create.

Furthermore, Java is an excellent option for developing online streaming apps. Kudos to its reactive feature. Moreover, Java keeps up with the trend and upgrades its versions more often than it did a few years ago.

For example, Java 15 was published only six months after Java 14. Compared to the 5-6 years it took to update prior versions such as Java 8-13.

In our article, we answered your question, 'what is Java used for?' Also, we evaluated it to other innovative technologies like Python, C+ +, C#, and others. Java will continue making waves in the future because of its enormous development and use in extensive projects like Twitter, Opera Mini, Google, Uber, and others.

So, suppose you are toying with the concept for a great product. In that case, you can hire top-notch Java Developers and Kotlin Developers to bring your ideas to reality.

Vitalii is a veteran frontend developer and mobile developer (with the special <3 for React Native) who likes to explore new technologies, test new tools and discover new approaches.

WOW Your Users With These UX Best Practices for Mobile Design

Looking for amazing projects to work on as a Java developer?

Join Ideamotive Talent. Work on international projects, earn $$$, and grow your career on your terms.