We use technical and analytics cookies to ensure that we give you the best experience on our website. You can learn more about it in the Privacy Policy page.
Accept & close
Looking for top Mobile App Developers? They are just a few clicks away.
Hire Mobile App Developers

Flutter vs Swift: Which One Is The Perfect Solution For Yours iOS App?

Swift and Flutter are the two most wanted technologies for companies that consider creating an iOS application. Can the pretender win with the native technology? How to choose, what’s better for YOUR application? Let’s find out!

According to Statista, mobile apps around the world brought $462 billion in revenue for 2019. The two most popular app stores Google Play and Apple App Store offer respectively 2.9 and 2.0 million apps. All that is consumed by 4.5 billion Internet users worldwide, according to Hootsuite.

It would be a pity not to be a part of this growing business. Now, let’s check, which technology will help you make a better deal. In this article, we compare the solutions provided by two giants: Google and Apple. What will be the result for your business?

Swift is a programming language created by Apple as the successor of Objective-C. It’s used by Apple itself but also offered for developers to create their own applications for iOS-powered devices. Starting from 2020 you can use it to develop applications for Android and Windows as well.

Swift has been launched in 2014 and has since gone through plenty of updates and improvements. The latest stable release, 5.3.1, came out on November 13, 2020.

According to Flutter’s documentation, it is ‘a cross-platform UI toolkit that is designed to allow code reuse across operating systems such as iOS and Android’. This free and open-source platform is based on an object-oriented programming language Dart.

Both Dart and Flutter are developed by Google. Dart was first released in 2011, while Flutter joined only in 2015.

Flutter enables the creation of two versions of your application at a time. Being platform-agnostic Flutter uses one code to work from both iOS and Android.

While Swift is a programming language per se, Flutter is a platform that combines a language (Dart) and compatible widgets to build applications.

Flutter vs Swift - why should we compare them?

If one of them is a programming language, and the other is a toolkit or platform, why should we even compare them? They’re both popular solutions for mobile and web applications. You can use either of them for your iOS application, and they both deserve consideration.

Years of experience show that you don’t always need to use the platform-native solution to create a successful application. Especially, if you think about widening your offer and delivering the same application on other platforms.

So, which of them will be better, more suitable for your business? Let’s find out!

How to compare Flutter vs Swift?

We will use 10 factors to compare Flutter and Swift. Regarding UI, it’s important how well your app will work with the platform’s native interface and functionalities. Speed of coding is important for time-to-market and cost-efficiency. The performance tells us how well your app will make use of the device’s potential. Community and support will prove their importance when your development team encounters challenges. Stability is responsible for your application’s reliability to the user. Comprehensive and accessible documentation supports the development process. The maturity of the platform may influence performance and stability. Cost of development is crucial for business justification. Finally, talent pool volume impacts the development and maintenance of your app, as well as its costs.

Of course, since Swift is an iOS-native language, there are no issues with implementing any native iOS interface features. UX will be as iOS-type as possible. However, you’ll have to create every feature from scratch, every part of the UI from scratch.

With Flutter, you have plenty of UI elements ready to use. Name just Material and Cupertino widgets to begin with. Usually, you won’t need any support from Swift. From the user’s point of view, UI created with Flutter should be indistinguishable from native Swift.

Swift is great and quick for creating an iOS application from the very beginning. Overall, it works well, but reflecting changes in code takes more time. However, Swift developers claim it ensures shorter build time, especially regarding the initial build of an app.

Flutter, on the other hand, is equipped with numerous widgets, libraries as well as navigation and testing tools that boost the speed of coding. Flutter developers don’t need to focus that much on polishing UI elements, because Flutter does it for them. Moreover, Flutter’s Hot Reload shortens the time needed to see recent changes in the code. Modifications are therefore quicker. Moreover, often the same application written in Flutter needs fewer lines of code than its version written in Swift.

Again, Swift being the native language for iOS apps has a serious advantage. You can count on better performance for tasks requiring massive computation power (graphic effects for example). When it comes to juicing-out the platform, Swift may be the better choice.

However, Flutter doesn’t fall behind. First, Dart uses a garbage collector. Second, it’s compiled AOT (ahead of time) allowing for quick communication with the device. Unless you really need to make the most of iOS platform, Flutter will perform virtually as well as native Swift.

Main Swift community gathers around mentioned Swift.org. On GitHub, there are over 830 contributors to Swift, and about 2600 watch the thread. You can also encounter over 284 thousand questions tagged with ‘swift’ on Stack Overflow.

The figures for Flutter look similar. Watched by 3400 on GitHub with 770 contributors. However, the number of questions tagged ‘flutter’ on Stack Overflow is less than 70 thousand. Maybe there are fewer issues with Flutter though?

Flutter community gathers around Google Groups and other forums (like Slack community for Flutter). Moreover, being an open-source solution, Flutter is more community-friendly.

Although both technologies are relatively young, they don’t cause many issues with stability. They’re developed and maintained by professionals who use them on a daily basis. Theoretically, being native technology, Swift should be more stable and reliable on iOS than Flutter does. However, that’s the case only if you find and hire a top-notch Swift developer who is capable of getting the most out of Apple’s solutions.

Both Swift and Flutter have thorough documentation available online. For Swift, you should check Apple Developer documentation and Swift.org. For Flutter check Flutter.dev and enjoy comprehensive and well-written documentation in one place.

These platforms are young, yes, but it doesn’t mean they’re immature. Apple drew from many years of experience with Objective-C, before releasing Swift, and has introduced lots of improvements since then.

Google also gathered their experience for a couple of years, before launching Flutter.

The cost of the development

Both are open source, so you don’t need to spend extra money here. Experienced developers also charge similar rates. If you consider only an iOS app, the cost difference won’t be that big. However, Flutter enables you to create an Android version at the same time. And that would be a game changer.

Wanna-be developers wonder whether to learn Flutter or Swift, and companies should pay attention to those choices. The more people know and use certain technology, the easier it is to source talent for your project.

As for 2020, it will be easier to find a Swift developer than Flutter specialists. According to Stack Overflow 2020 survey, Swift is popular among 6.1% of professional developers, while Dart, the language behind Flutter, reached only 3.7%.

However, consider the fact that Flutter lets you develop both iOS and Android applications at once.

If the comparison above couldn’t help you decide, let’s look at how the business uses both solutions. Apparently, they’re used by smaller and big companies alike.

Applications that use Swift:

So? Flutter or Swift? No matter how many figures we provide, there’s no one-fit-all answer to this dilemma. There are well-known companies using both technologies and deciding which one to choose for your iOS app depends on individual traces of every business.

If your organization has some experience in any of the compared two, the choice will be easier. But you don’t need to learn Flutter or Swift. Neither do your employees. You’ll find all the experts you need for mobile development on both platforms with Ideamotive. 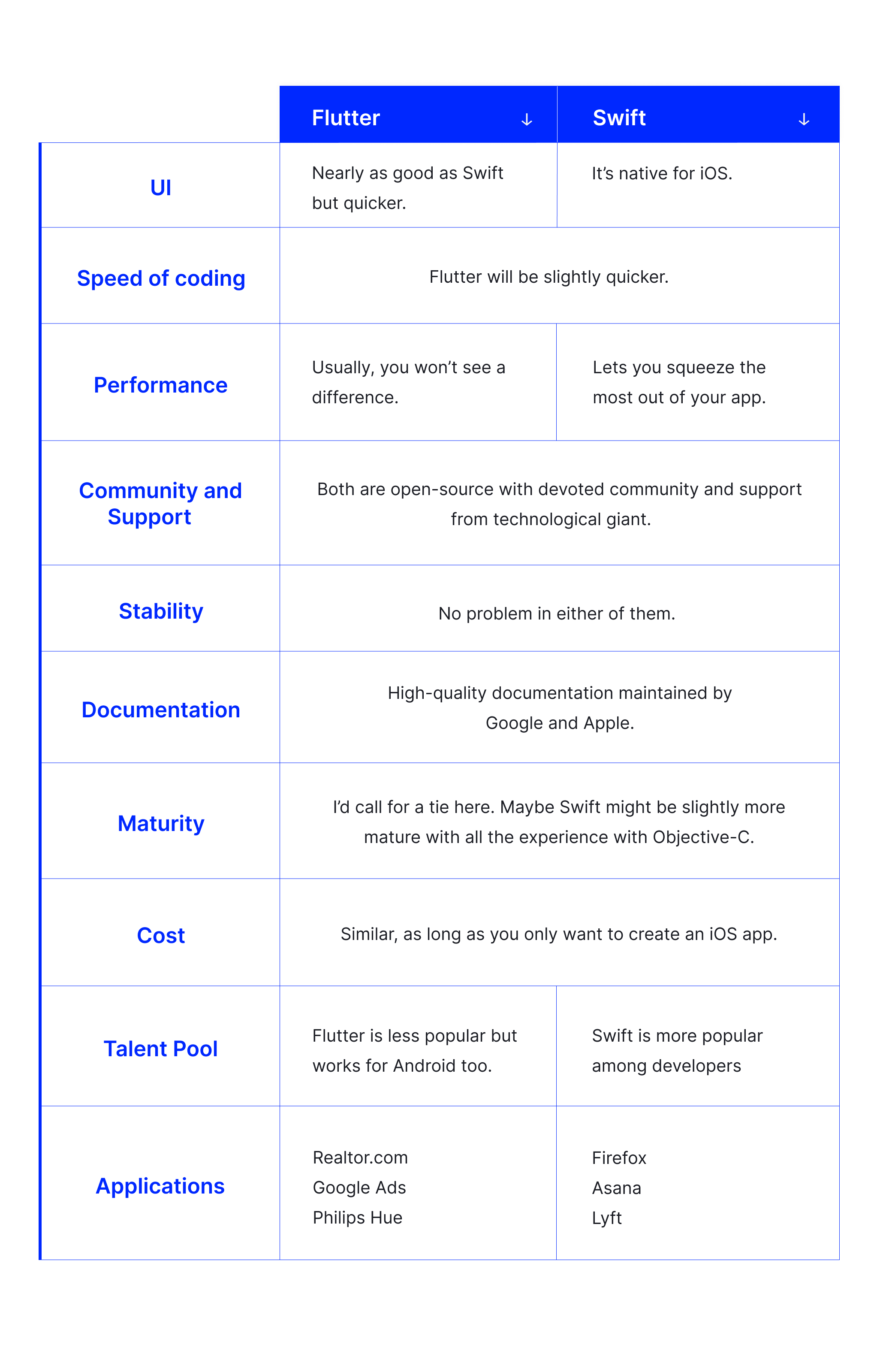 The Business Side Of iOS Mobile App Development

Guide for startups and mobile entrepreneurs

Looking for talented developers to build or scale your mobile product?
Our vetted experts are ready to join your team.
Hire Mobile Developers

Flutter vs Kotlin: Which Technology Will Be Better For Building Your Mobile App?

Flutter App Development: Everything You Need to Know

Swift vs Objective-C: Which Should You Pick For Your Next iOS Mobile App?