Two innovative solutions aimed at the unification of traditional web development. One, by developing an environment that combines both frontend and backend, second, by introducing a programming language that can run effectively anywhere. Following our large series of articles aimed at comparing the most popular programming languages and frameworks (see: Java vs Kotlin for Android, Ruby on Rails vs Node.js for web development), today we are looking into Node.js vs Java, and try our best to sort out the benefits and drawbacks for using each for your project.

Node.js was created in 2009 by Ryan Dahl by combining C, C++, and JavaScript. It is an open-source, backend, cross-platform JavaScript runtime environment, the main aim of which is to execute JavaScript code outside a browser. Node.js can interact with I/O devices through APIs and connect to external libraries written in other programming languages. "JavaScript everywhere" is a Node.js paradigm, highlighting the unification of web application development around a single programming language for both server-side and client-side scripts.

Java is a general-purpose class-based object-oriented language, designed by James Gosling in 1995. It is a network-centered language with little implementation dependencies, which are reflected in a paradigm of its own - “Write once, run anywhere” (WORA). Flexibility and portability are at the heart of this language, allowing it to run on any operating system or machine. Back when the first version of Java was just released, it aimed for interactive television development, soon becoming one of the most popular programming languages worldwide.

To create a comprehensive comparison between the two of them and access in which use-cases one is better than another, we will define key features of Node.js and Java, including performance, stability, security, documentation, community, talent pool, easiness to learn, speed and cost of development.

Node.js vs Java: A full comparison

Node.js is based on JavaScript, meaning developers can use the same syntax for both client and server-side, which is a huge advantage for faster and more agile workflow. Additionally, this environment has an event looping mechanism, helping servers to respond in a non-blocking way and enabling higher scalability. Developers also tend to highlight its lightness.

Java is a statically-typed and secure language, as compared to its rival, Node.js. Multithreading (or concurrency) and platform independence are powerful aces up its sleeve. Multithreading allows for the execution of multiple processes at once and distributes CPU use optimally. Java is compiled in bytecode, which facilitates portability and platform independence, meaning that the code can be executed on any computing machine or OS without a change in syntax. Java’s other worthy features are robust memory management and its concurrent accumulators.

One thing that developers always hear about Node.js is that it’s extremely fast. The question poses: is Node.js faster than Java? The short answer is: yes. Java is slower than native languages since it uses compilers. Additionally, its garbage collection function, though very useful in some cases, requires lots of memory space. In contrast, applications written in Node.js never buffer, outputting the data in chunks and making runtime faster. Even though Just-In-Time compilers may improve Java’s performance a bit, in the contest of Node.js vs Java speed there’s a clear winner.

When it comes to stability, the picture is the exact opposite between Node.js and Java. Node.js is built around interacting with the APIs. Since APIs tend to change at frequent intervals, they often cause issues in stability for apps built in this environment. Java is known for having highly stable interfaces, thanks to its rigid time-proven structure.

Java does not have internal scalability, although the lack of thereof may be improved through integrating third-party applications, such as NCache (for distributed cache). The event mechanism within Node.js allows servers to respond in a non-blocking way, as a result making them highly scalable. Scalability of Node is one of its prime features.

Node.js lacks default error handling, which is often considered a security issue. In addition, the JavaScript environment is also very vulnerable to nmp phishing and denial-of-service attacks for servers. Java, on the other hand, is very secure. Its vulnerabilities often come from integrations, rather than from the design of the language itself. TypeDcript is a popular typed implementation for statically typed languages like Java, so most of the type-related errors can be easily avoided by using it, while bytecode verification in Java checks all the code right before running.

Documentation pages are great to get started with the new languages, to closely examine their existing characteristics, to search for advanced solutions. Node.js documentation page includes API reference documentation, ES6 features, and guides, providing a comprehensive overview of most used and niche features. Java’s documentation is a large database for all language-related information too.

Java and Node.js have large communities and dedicated developers, who create libraries and customized content. Just by the timespan, the Java developer community is quite a bit older and is known to be more versatile with the change of Java’s characteristics over the years. However, that is not to say that any of the communities is inherently better or more knowledgeable than the other. Both newcomers and specialists are likely to receive support in solving issues in the respective communities easily.

According to Stack Overflow Developer Survey, Node.js has been the most popular framework for the second year in a row, with about 51% of respondents claiming to use it regularly. Node.js developers place the environment in a proud 7th place in the most loved in Frameworks, Libraries, and Tools category. Moreover, it is the 1st among the most wanted. Competing with other industry’s programming languages, Java lands 5th place among the most used languages and 10th among the most loved. 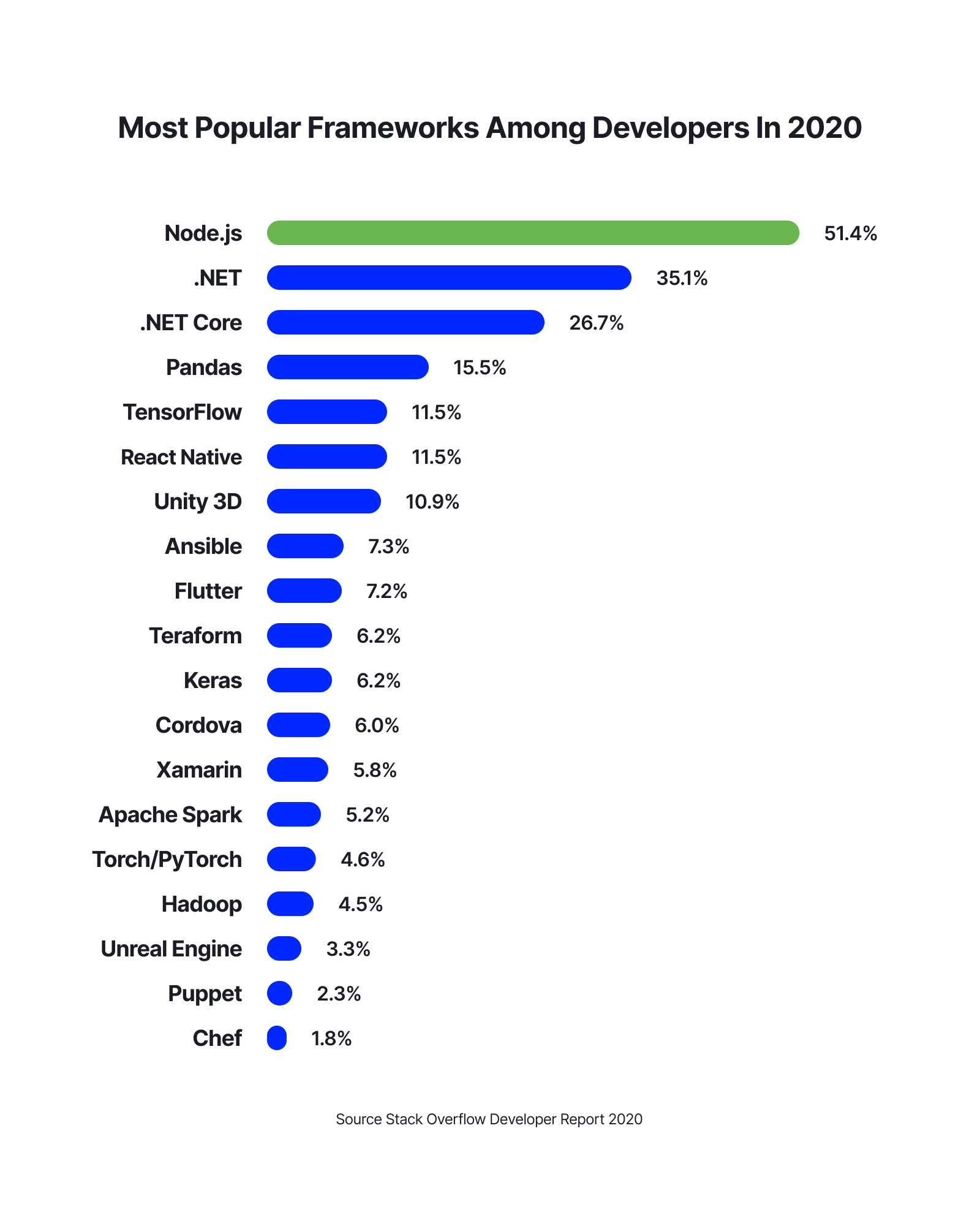 Node.js vs Java: easiness to learn

Node.js environment offers fast and easy code writing due to its simple syntax and interpreted code. Overall, it is easy to grasp, especially for developers skilled in JavaScript. Java, on the other hand, has a slightly steeper learning curve, as it has a very broad ecosystem. Figuring it all out on your own is a daunting task, though not an impossible one.

Node.js vs Java: speed of coding

Both Java and Node.js have numerous community-developed libraries and reusable components, making the code writing process easier for developers. However, Node.js has a slight advantage in this comparison. Jeff Harrell, ex-Director of Engineering and Chief Architect at PayPal has documented that the Node.js app needs 33% fewer lines of code and 40% fewer files. All taken into account, the development of the Node.js app takes less time on average. Though, it is important to note that this is likely to vary depending on the type of your project, the size of your team, and their language proficiency.

Node.js vs Java: cost of development

According to the Glassdoor approximations, the national average salary for a Java programmer in the United States is $90,000. Node.js developers make quite a bit more with $105,000. Consequently, Java development is cheaper in the US market. Though, in case you decide to hire freelancers or outsource your development, the prices that you encounter will vary largely. Usually, it is hard to pinpoint the cost exactly, since project complexity, management, drawbacks, and other criteria affect the estimates. Getting a quote from a company (or a few) is a great strategy to gather an exhaustive overview of the possible expenses.

Verdict: Vary depending on project complexity, workforce, and other factors 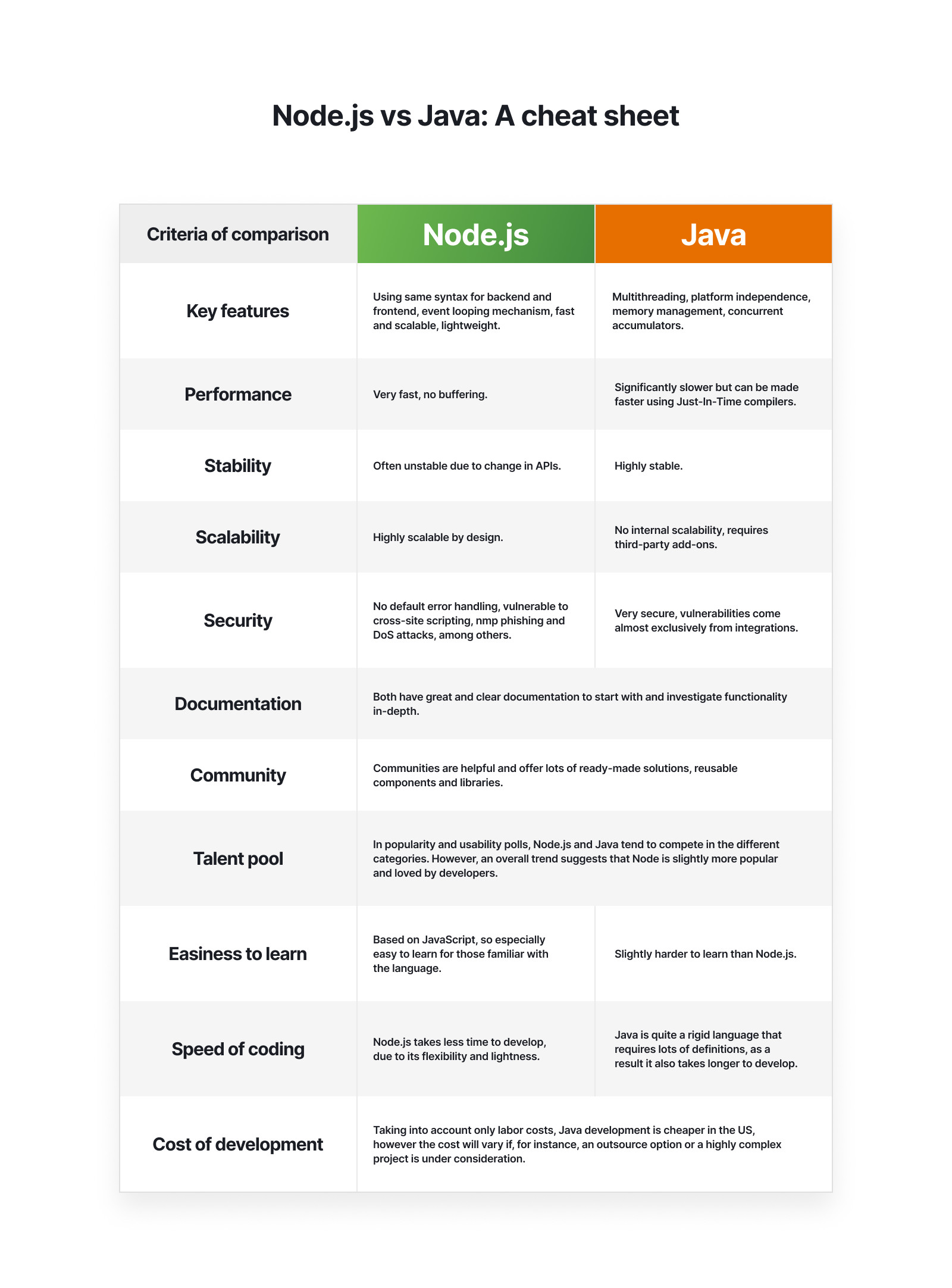 Node.js vs Java: when to use

Node.js is a speedy and scalable server-side runtime environment, while Java is a complex, web-based, highly concurrent language. To minimize errors and rework in the development pipelines, it is a good idea for both developers and managers to know how to utilize programming languages according to their pros and cons. Node vs Java for backend or frontend? Let’s figure it out.

What is Node.js good for?

Developers can utilize Node.js for frontend and backend since both can be written using JavaScript. To make the most out of the JavaScript environment pros, it’s best to use it for the development of:

What is Java good for?

Java is best used for backend development since its frontend capabilities are limited and require additional frameworks to look more modern. Java is best utilized for:

Let’s do a quick round-up.

Java and Node.js are unique technologies, both with their benefits and disadvantages. In order to evaluate your next project best, it is crucial to understand them.

When it comes to speed, Java vs Node.js benchmarks show that the latter tends to perform better overall due to its lack of buffering and unique code execution. Node also draws a win in scalability with Java having no built-in scalability features. When it comes to stability measures, Node.js APIs change often, while Java proves more rigid. A similar pattern is seen in vulnerabilities, with Java’s design clearly built for higher security.

Both technologies have great communities, unique libraries, and materials that help newcomers and professionals. Their popularity is hard to evaluate since they often come in different categories (Node as environment and Java as a programming language). Node.js seems to be slightly more popular and loved by developers.

What if your project is a blend of those? If you’re still not sure which technology to use, feel free to consult your product with us. We can provide you with technical consultancy and meet your needs with experts skilled in both technologies, who are also experienced in your unique niche.

Everything You Need to Know as a Product Owner and CxO

Speak with the Article Author
Don't just read about it; experience it. Schedule a call with the expert and gain valuable insights and understanding.
Schedule a consultation

Go vs Node.js - What Should You Choose For Building Your Product?