What Is The Difference Between UX/UI Designer & Front-end Developer?

Why would you care about something as trivial as the look of your web application or webpage? Well, because about 94% of people abandon a poorly designed page. Great web design will let you make a great first impression and transform users into evangelists of your brand.

Which of them, UX or UI, is more important? And which guarantees success for your web application?

If you don’t know what’s the difference between UX designers, UI designers, or Front-end developers, and what they can do for your project, this article is for you.

What are UI and UX?

People who don't deal with this issue on an everyday basis tend to have problems understanding that UX and UI are two different things. Misconceptions about these two might be caused by a very common habit of posting job offers for various UX/UI specialists. While it is possible and sometimes desirable to have expertise in both areas, that's not always the case. So, what are UI and UX?

Let's start with the UI. User Interface. We can safely say that every device and many tools have their own User Interface. A computer has a keyboard, a screen, and a mouse or touchpad. User needs them to communicate with the computer. Similarly, all applications and websites have tools to facilitate bilateral communication with users. All the buttons, forms to fill in, information and feedback you receive after certain actions. Even in the case of web development, these things that belong to UI are almost tangible.

UX, the User Experience, is a more psychological thing. Let's look at something more common. Like cars. They have keys for opening doors, steering wheel, pedals, buttons, and switches. These elements will differ in shape but are pretty much universal. That's their UI. However, the way you feel driving a pick-up truck (let's say Ford F150) and a Gran Turismo (let's say Aston Martin Vantage), is dramatically different. That's the User Experience. It's pretty much the same with UX in web development. Most applications use buttons, forms, and pop-ups. However, sometimes you stumble upon an app that makes you love it. The reason for that is the awesome User Experience.

Now that we know the difference between UX and UI, let's take a look at what it takes to design UX and UI.

What is UX Design in Web Development?

In order to fully understand what is User Experience design, we need to recognize two issues. First of all, we're talking about their feelings and perception from the very first contact with our product (website, application, service, etc.), to the moment, when their needs are fulfilled. Often even more than that, if we take the after-sale service into account. Second of all, UX design is a never-ending process of consecutive iterations of testing and improvement. Once you have designed and implemented great UX, it doesn't mean that there's nothing else to be done.

To lead the process of UX design, you will need know-how in various fields. However, many of them aren't closely related to web development in the sense of writing code. The role of a UX designer is to navigate between marketing, research, and development.

The responsibility for UX design enforces the need for a deep and complete understanding of end-users, their motives and the value they get with the product or service. To create solutions tailored to real customers, UX designers will use user personas and real-life data that show how users behave. Your decisions should always be based on research conducted with users. The UX designer aims to induce certain feelings in users, but only the research will tell if it works.

Apart from focusing on users as people, UX designer needs to know and understand the structure of the product or service. What functionalities will be implemented and how to design the user's journey (storyboards are often used for that purpose). UX designer, or someone in the UX design team (it might be the UI designer, but we will get back to it later), might be responsible for the creation of wireframes and prototypes that should be tested on humans and then improved.

Good UX designer needs to understand this whole process. In smaller companies and with simpler products, it might be one person, while more complex challenges need a whole team of experts. No matter the situation, there are some traits and skills a UX developer will benefit from. Among them, you will find empathy, attention to detail, and communication skills as well as knowledge of behavioral psychology (decision-making), problem-solving skills and wireframing.

What is UI Design in Web Development?

User Interface design is part of the UX design process. Equipped with guidance from UX research, UI designers translate a vision into a 'tangible' mock-up. They design navigation elements, like buttons, menus, use of colors and fonts, text flow, etc. According to the UX guidance, they also prepare various versions for mobile and desktop devices.

To do all of that according to the best design principles and fit into UX vision, they will need to be skillful graphic designers with knowledge of branding, wireframing, accessibility, and UI prototyping. UI designers are also responsible for making sure that with the designed interface end-users will achieve their goals.

Depending on the strategy and the stage of the design process, the design of User Interface can only be a static visual interpretation, or more interactive prototype presenting solutions that will look similar to the future final product. For the latter, UI designers need more than graphic design software. They will use HTML, CSS, or even JavaScript and JQuery. So apart from design background, a good UI designer will benefit from basic front-end skills and the understanding of technological constraints.

What is Front-end in Web Development?

Now that you have a well-designed User Experience and an outstanding User Interface designed accordingly, you still need to create your app or website and its interface. What you have now is the visual part that actually doesn't do anything. Now it's time to let front-end developers do their job.

To make clear what is contained within the responsibilities of front-end developers, let's look at the distinction between the front-end and the back-end.

Basically, in web development, there is a paradigm of dividing systems into two parts. These are two sides of one application. The back-end is server-side. The end-user usually cannot see this side. Data operations take place here to answer requests sent from the client-side. The client-side is the front-end of the application. This is where the User Interface is and requests are prepared.

Let's look at a simplified example. When you fill in a registration form that has several pages, most probably everything happens in the front-end. You use the interface to communicate with the application. Your entries are validated and kept in cache memory as you move from one page to another. When you finally click 'submit', a request is sent to the back-end, your account is created, and your information stored in a database.

So, as you can see, for the front-end of the application to work, you need more than just User Interface. This visual part needs to be programmed (what happened when you click that button when to communicate with the back-end side, etc.). This is where front-end developers enter to do their job.

It's good when a front-end developer knows the essentials of UX and UI design principles. However, most often it is a typically technical role that needs mainly programming skills. On the other hand, you might meet front-end developers, who are UI designers at the same time. 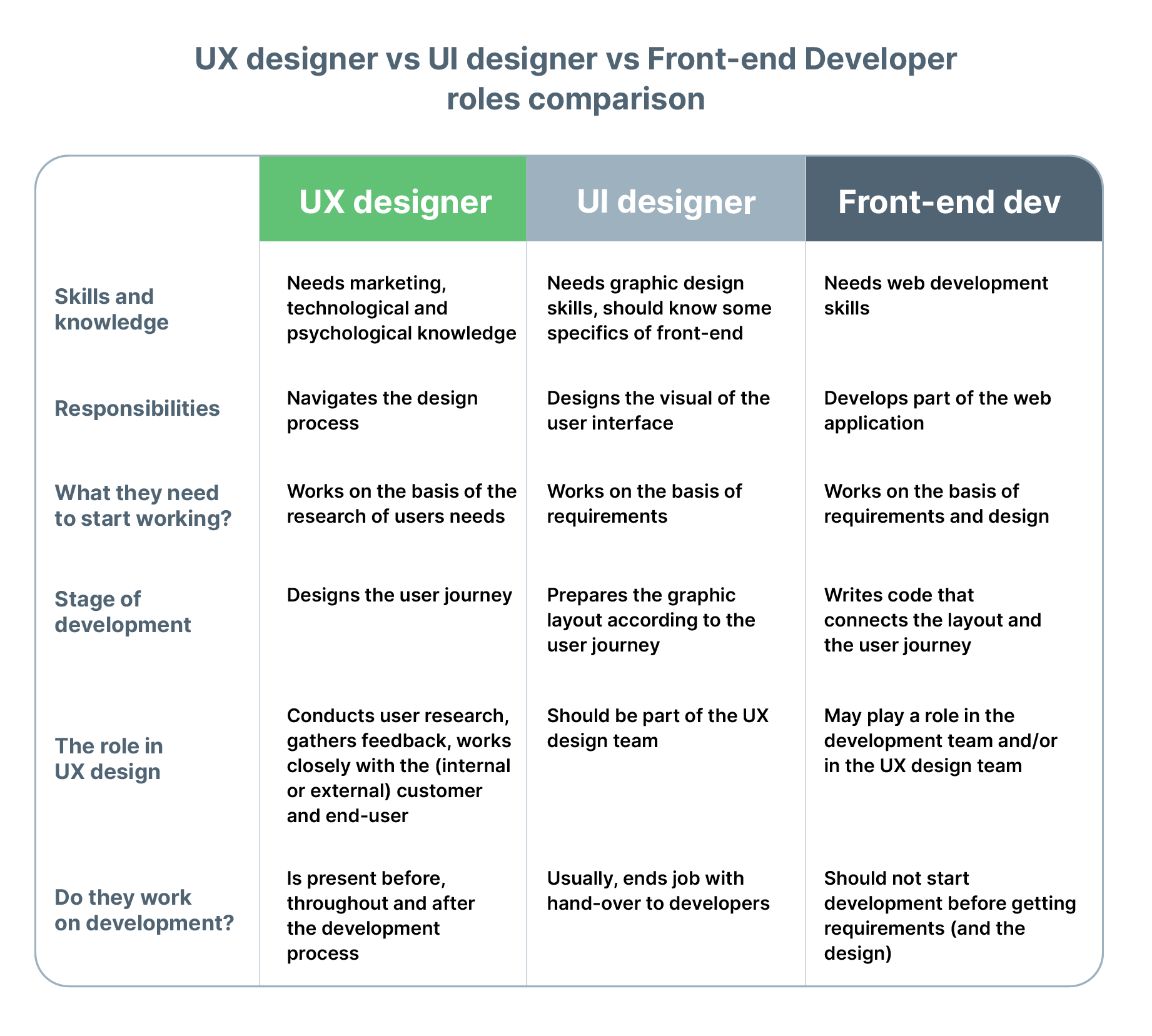 Who Do You Need for Your Project?

As usual, there is no simple answer to such a question. In an ideal situation, you would have the User Experience design team including the User Interface design specialist(s) and a Development team.

Obviously, you must have developers (back-end and front-end or full-stack) who will develop your web application. You probably already know that if you’re counting on commercial success, you will need to hire someone who will be responsible for fabulous user experience. And somewhere between it would be nice to have a specialist responsible for the User Interface.

It is possible to find experts who combine UX and UI design skills, or UI design and front-end development skills. But to combine a rather marketing role of UX designer and a technical one of a front-end developer, it would take an extraordinary talent.

Ideamotive has created a talent network, where you will find experts you need. We've gathered experienced UX as well as UI designers and web developers, both front-end and back-end. With us, you are sure that people you hire will fit your needs, no matter the industry, tech stack, and company culture. Contact us, and let us find you people that you need.

JavaScript: The Definitive Guide For Entrepreneurs and Product Owners

Everything You Need To Know About JS Business Implementation In 2022

Speak with the Article Author
Don't just read about it; experience it. Schedule a call with the expert and gain valuable insights and understanding.
Schedule a consultation

What Makes The Best UX Designers Best In Their Job?

React vs Angular – Which One Is Better For Your Front-end?

Amazing Examples of Angular Web Development to Get Inspired

Looking for a specific type of design service?

Looking for UX/UI design experts to join your team?

There are dozens of vetted UX/UI professionals in our talent network.