Best Java IDEs and Editors To Use In 2022

As a Product Manager, you ought to be sure that your devs use only the best possible facilities involved in the product building process. IDEs and code editors are on the list of the most important puzzles needed to build a robust project.

Integrated development environments (IDEs) are applications that facilitate the development of other applications. One of the main advantages of an IDE designed to perform all programming tasks in a single application is that they offer a central interface with all the tools a developer needs, including:

Integrated development environments work to improve developer productivity. These IDEs increase productivity by reducing setup time, speeding up development tasks, keeping developers up to date on the latest best practices and threats, and standardizing the development process so everyone can join in.

To reap even more benefits, IDEs can help restructure the development process by promoting a holistic strategy. They force programmers to think of their activities in terms of the entire development life cycle (SDLC) rather than a series of individual tasks.

Just like with the decision to outsource Java development, it can be difficult to determine which IDE is best for you. Especially with so many Java IDE options on the market

Today we will discuss the main requirements to consider when choosing an environment and the top 10 IDEs for your Java developers.

Differences between editors and IDEs

A code editor is one of the most important tools for programmers, specifically designed for editing the source code of computer programs. The code editor is essentially a text editor, but it's also designed to help you write code. It will help you colorize your code and provide you with more advanced tools to make coding easier. A simple code editor can be either a standalone program or part of an IDE or web browser.

If you are a beginner and are learning programming in any language, then you should use the code editor. Basically, it is a text editor, but with more features and built-in features. These features simplify and speed up the editing process and help you write better programs by identifying problem areas and debugging your code.

But since we are talking about experienced web developers just like with React Native and Ruby on Rails IDEs we recommend you look no further than Java IDE.

Eclipse IDE is one of the most popular Java IDEs on the market. It's free, open-source, and has an extensive plugin ecosystem that allows users to customize features for app development.

The Eclipse IDE comes in both desktop and cloud versions, with the cloud version allowing developers to write code in a web browser.

Eclipse is the best choice because of its development tools. Eclipse offers the Eclipse Marketplace, which contains many plugins available for download, as well as a plugin development environment that allows developers to create their own functionality.

Eclipse supports over 100 programming languages, including JavaScript, Groovy, and Scala, and has a robust set of modeling, diagramming, and testing tools. Eclipse also supports the popular Java build tools, Maven and Gradle.

Optimal for: A multilingual developer who is looking for an IDE that offers an extensive plugin environment and doesn't mind taking the time to customize your experience. 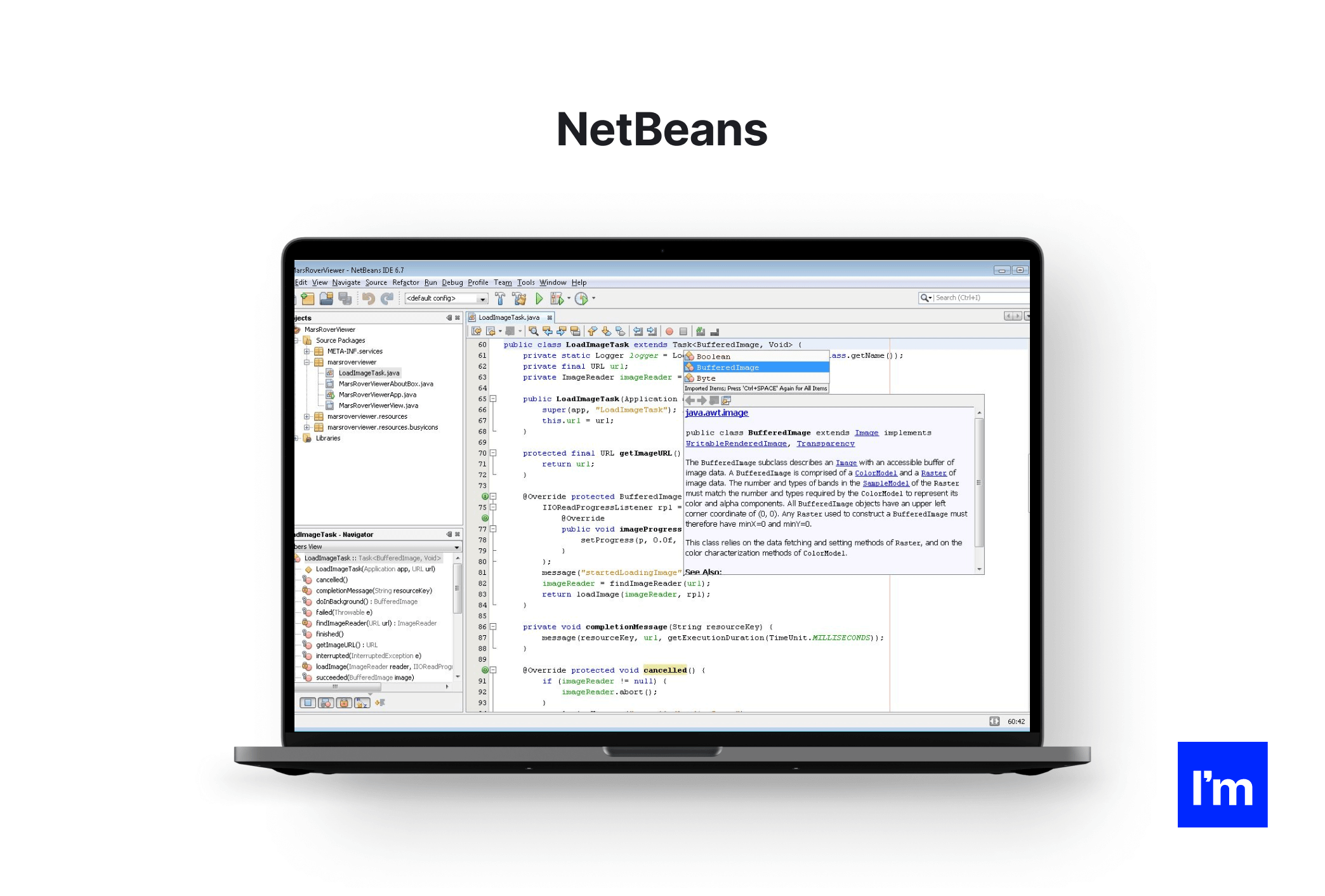 Apache NetBeans is the official development environment for Java 8, making it the best online Java editor for building desktop, mobile, and web applications. NetBeans is open source and is used to develop desktop, web, and mobile applications along with HTML5 and C++.

NetBeans makes it easy to customize software applications because it highlights Java code syntactically and semantically.

With powerful refactoring and debugging tools, NetBeans helps improve accuracy and efficiency. Developers primarily use NetBeans for Java, but it has extensions to work with other programming languages ​​such as C, C++, and JavaScript.

Optimal for: A multilingual developer looking for a ready-made IDE with collaboration tools and Maven support. 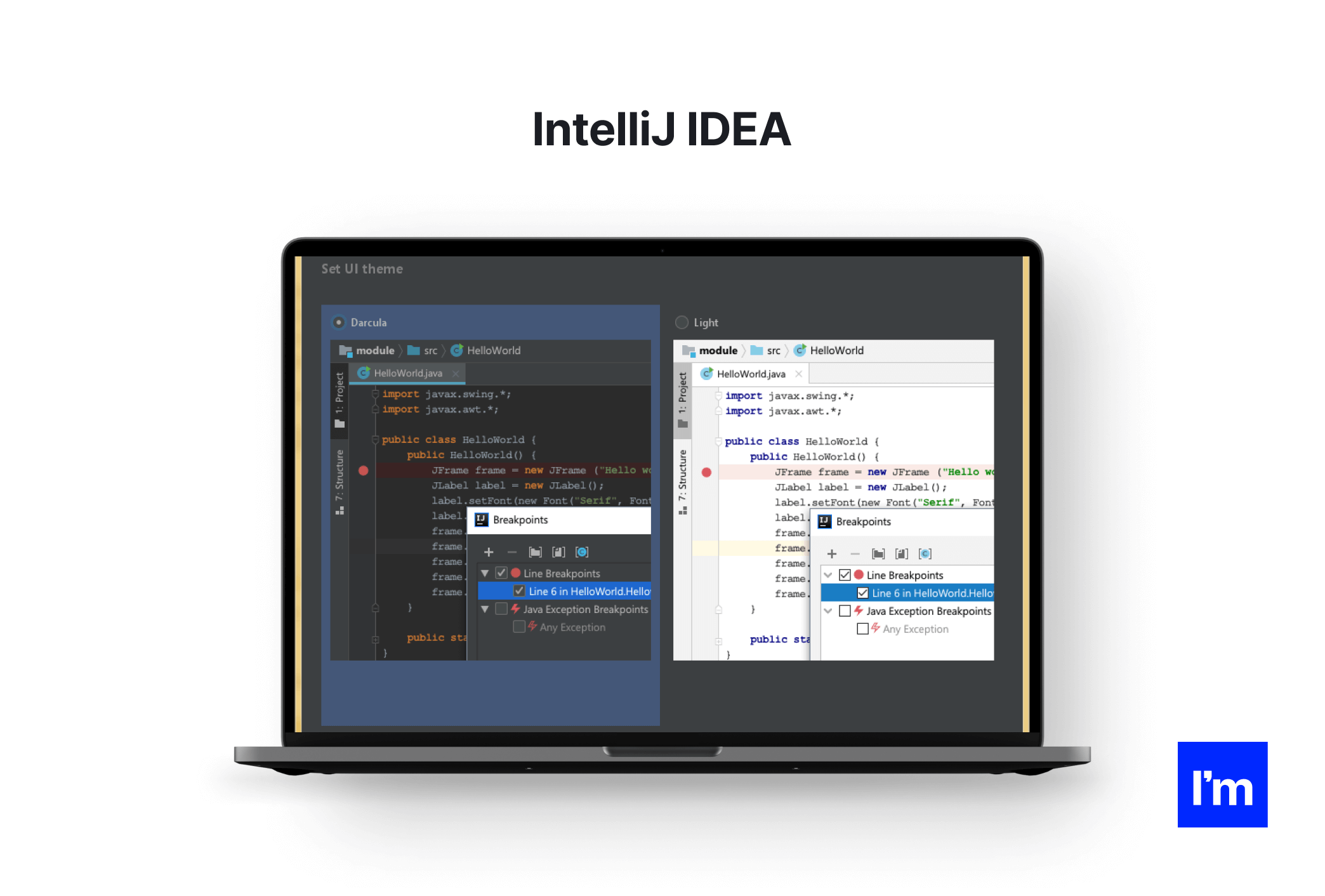 IntelliJ is one of the best IDEs for Java development. It is a powerful and ergonomic IDE with productivity features without cluttering the user interface. It includes a set of tools that make programming easier, such as smart completion, cross-language refactoring, data flow analysis, and language injection.

IntelliJ is available in two versions: the Apache 2 community licensed version and the proprietary release version. The community version is free and open-source, with a focus on Android development and the Java Virtual Machine (JVM). The final version is paid and focused on web development and enterprise development.

Optimal for: A developer who needs an intuitive IDE that is easy to use out of the box. You also have a fast computer that can run a heavier IDE. 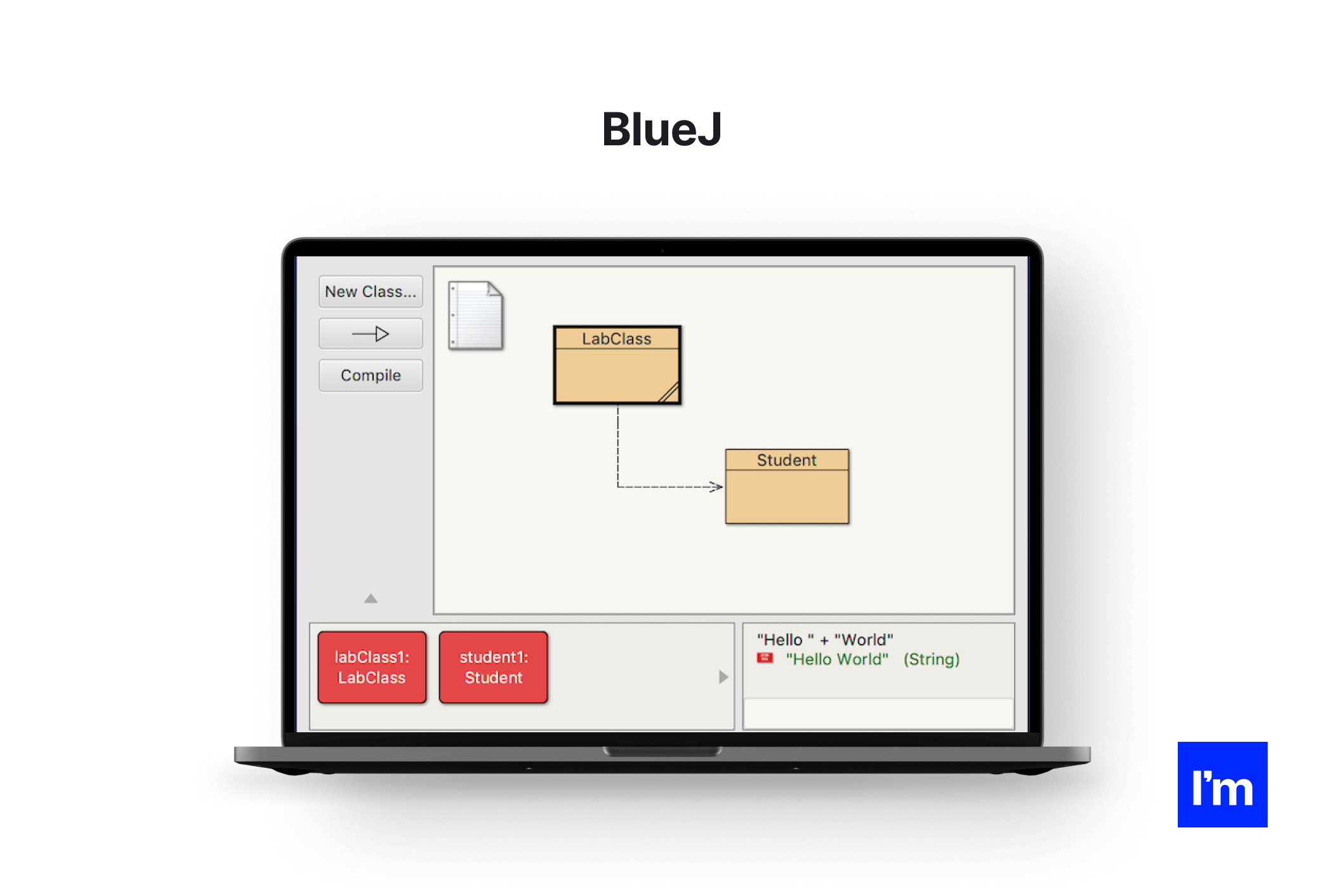 BlueJ was originally created for educational content but is now used on a smaller scale for software development. While BlueJ is a great Java IDE for beginners, many Java veterans prefer to use BlueJ because of its interactive and simple user interface.

BlueJ makes it easy to interact with objects and has a powerful editor that helps developers visually scan their code and create dynamic objects. BlueJ is an innovative online Java editor with unique features not found in many others, such as scope coloring, code bars, and object benches. BlueJ is portable and supports various operating systems.

Optimal for: Those who want to learn Java and practice more on building simple projects in an intuitive, lightweight environment. 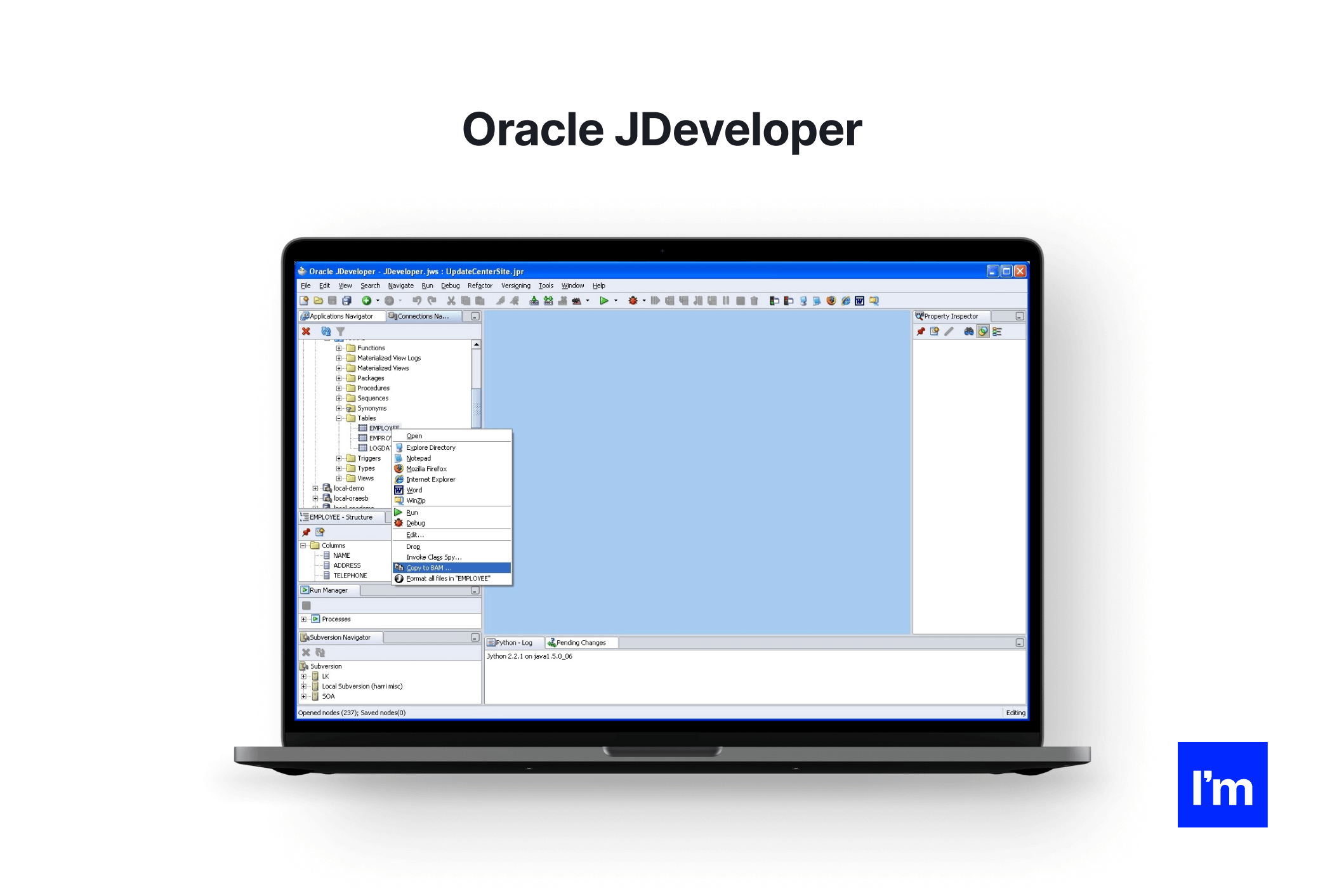 It integrates with the Oracle Application Development Framework (Oracle ADF) to simplify development.

JDeveloper offers visual and declarative editors and allows developers to edit their applications directly from the coding environment. JDeveloper has a drag and drop feature that makes it easy to develop applications. It also supports Java EE and Java SE.

Optimal for: An experienced Java developer who needs a wide range of tools and has a computer that can run a heavy program. 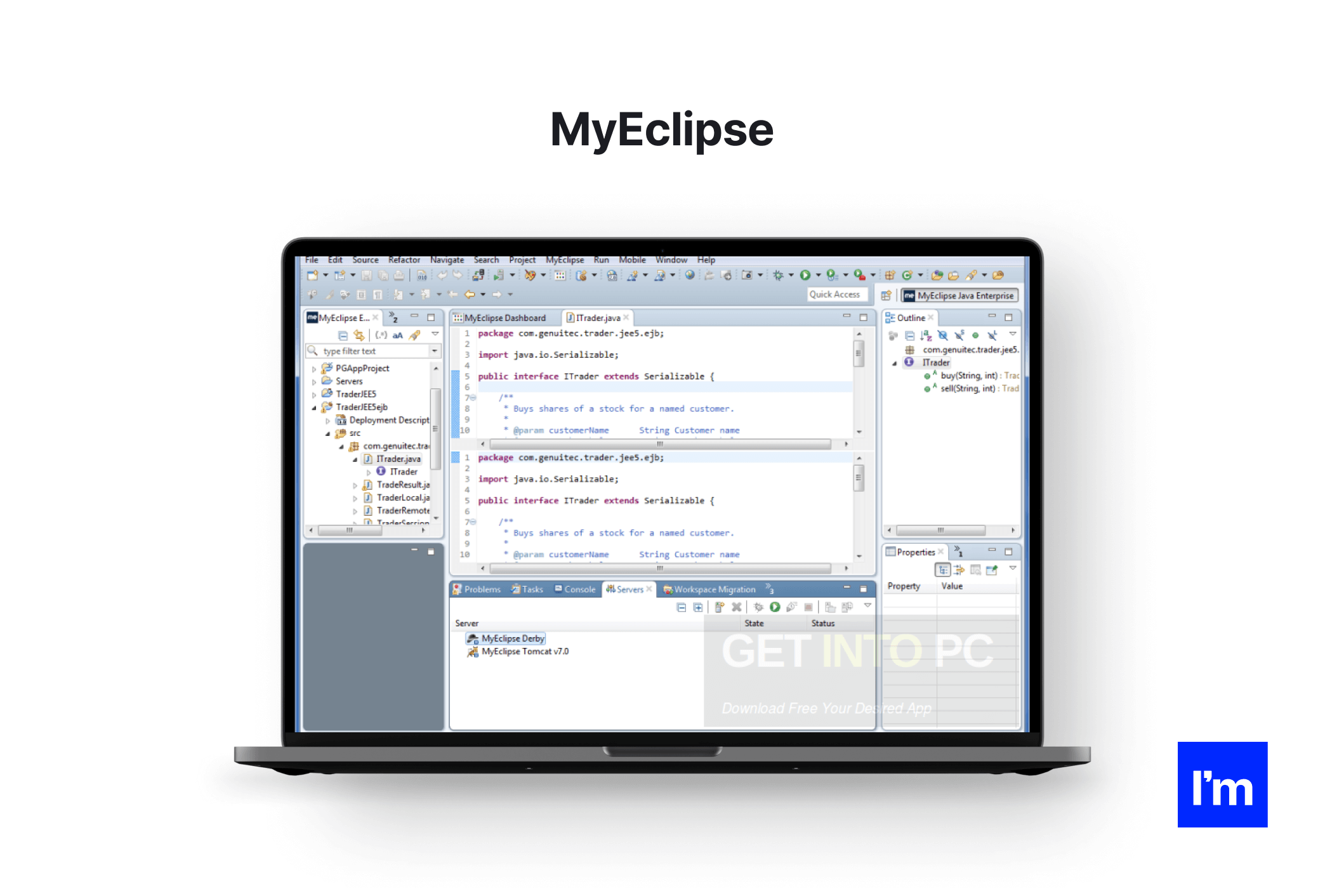 MyEclipse is a proprietary Java IDE built on the Eclipse platform. It uses both proprietary and open-source code in the development environment, and its tools can be used for Java application development and web development. MyEclipse offers support for Angular, HTML, TypeScript, and JavaScript.

It also supports database and application server connectors and has extended support for Maven and Spring. MyEclipse helps you create powerful frontends and backends.

Optimal for: The one familiar with Eclipse and ready to pay for the IDE. You should also have a fast computer to work with a heavy IDE. 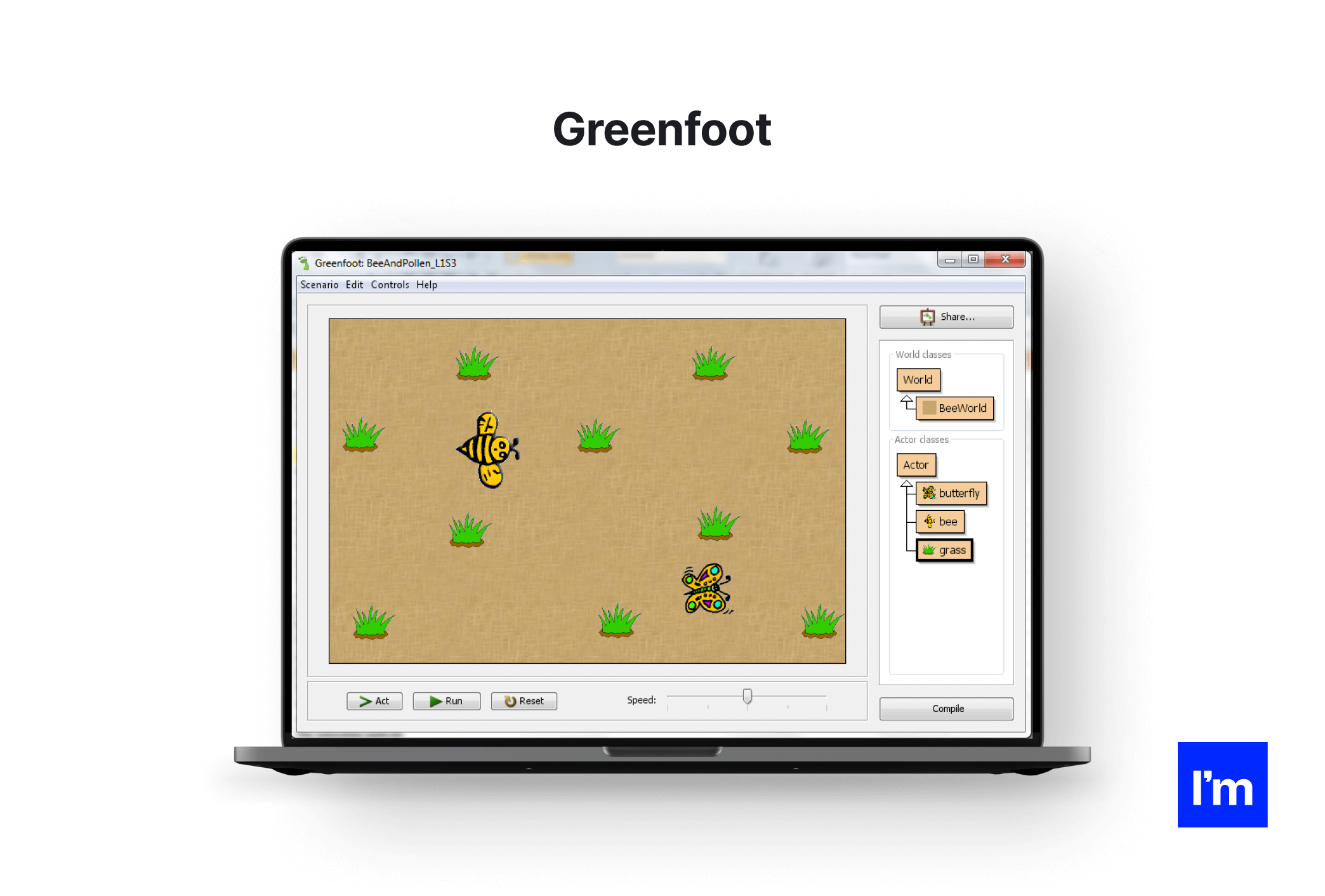 This IDE captures the attention of teachers and students and provides them with a platform for interactive interaction. Greenfoot offers free access to sounds and animations and illustrates concepts such as object-oriented programming, object interaction, and parameters.

Optimal for: A newbie Java developer who needs an easy-to-learn development environment with a strong online community and interactive interface.

jGRASP is a lightweight Java development environment that automatically generates software visualizations. It was developed in Java so it is platform-independent and works on all platforms with JVM. jGRASP offers tools, a built-in debugger, and UML class diagrams.

This online Java editor can perform static programmatic rendering of source code and rendering of data structures at run time. It can even create control structure diagrams for other programming languages ​​such as Python, C++, Objective-C, and Ada.

Project Managers should note that this lightweight IDE is configurable with most free and commercial compilers for various programming languages.

Optimal for: A multilingual developer who likes to visualize their projects and doesn't need a fancy GUI.

JCreator is a powerful and lightweight Java IDE written in C++ making it faster than other Java IDEs. It has an interface similar to that of Microsoft Visual Studio, making it easy to navigate through the source code. JCreator can handle different JDK profiles for multiple projects and offers strong API guidelines for developers.

This is a great option for beginners because of the intuitive user interface. It provides features such as project templates, code completion, syntax highlighting, and wizards. This allows developers to directly compile or run their Java code without running the main document. JCreator is offered in Pro Edition and LE Edition.

Optimal for: A Windows user who is looking for a fast IDE with a clean interface and is willing to pay for it.

Cross-platform: No. Only Windows 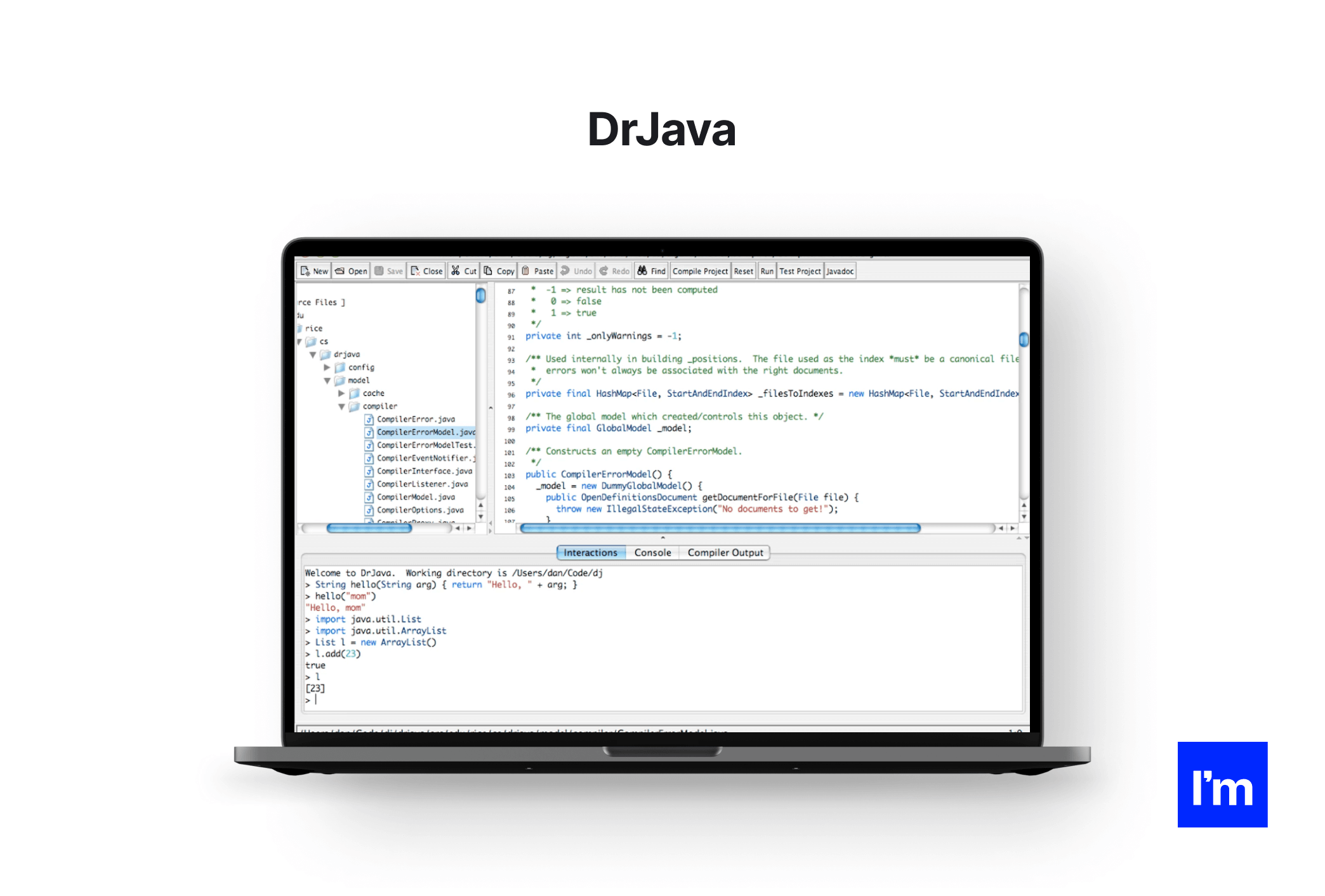 DrJava is a lightweight IDE designed for beginners and students. While not as powerful as some of the other IDEs on this list, it has a simple interface and a consistent look and feel across platforms.

DrJava allows developers to interactively evaluate their code from the console and present their results in the same console. It helps developers with features like search/replace, auto-complete, auto-indent, commenting, and syntax highlighting. It even integrates into Eclipse via a plugin.

Optimal for: A beginner in Java development who wants to practice basic projects without configuring anything. Leverage it in case you don't want to mess around with installing and configuring a heavy IDE.

Java has been here for a while now. As a result, we can see, there are many IDE options available for Java developers, ranging from full-featured commercial software to free and open source products. The choice of the online Java editor depends on your current project and the personal preferences of your development team.

Let it be building microservices in Java or coding a simple children’s game the choice of the IDE has to be corresponding! Hope this list helps you out in this matter!

Java vs. Kotlin: Which One To Pick While Building An Android App?

Looking for Java development experts to join your team?

There are dozens of vetted Java professionals in our talent network.