A lot in blockchain seems unknown and hard to understand; therefore, there are several misconceptions and myths due to a lack of proper understanding of the technology. Additionally, blockchain is mostly known for its use in enabling cryptocurrency. However, blockchain offers a lot of applications beyond cryptocurrency, and I will highlight them in this post.

Also, because of blockchain's popularity, there are many myths surrounding it. This post will arm you to make well-informed decisions about the blockchain by explaining what's true and what is a myth in the blockchain. And answer most of your questions about Blockchain technology. 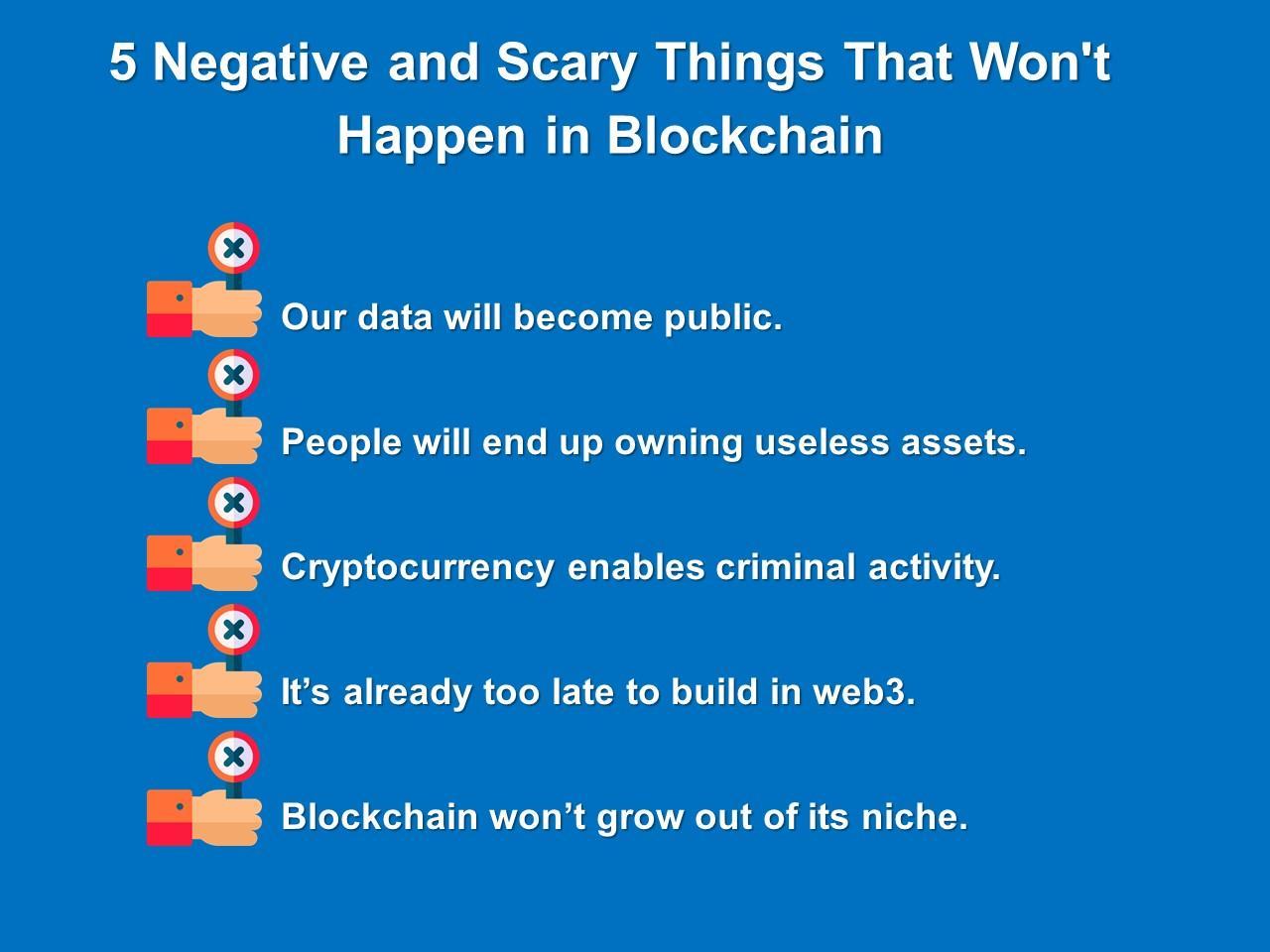 How does Blockchain Technology work?

Smart contracts are used by businesses to self-manage business contracts without the assistance of a third party. They are programs saved on the Blockchain system and are executed automatically when certain circumstances are satisfied. Additionally, they run to ensure that the system works confidently without the need for trust, a trustless system. A logistics company, for example, may have a smart contract that automatically makes payment whenever items arrive at the port.

The Blockchain network's shared database that maintains transactions is known as a distributed ledger. The distributed ledger is similar to a shared file in a text editor that everyone on the team can update, and anyone with editing rights can even remove the entire file. But in the case of a  distributed ledger, there are rigorous restrictions governing who can edit it. And, once an entry is recorded, no one can delete it.

The security mechanism used to identify Blockchain network participants uniquely is known as public key cryptography. For network members, this technique creates two sets of keys. One key is a public key that everyone in the network shares. The other is a private key that each member has. The general public and individual private keys work together to unlock the ledger's data.

For example, Jacque and Anna are network members. Jacque logs a transaction encrypted with his private key. With her public key, Anna can decode it. This way, Anna is sure that Jacque completed the purchase. If Jacque's private key were tampered with, Anna's public key wouldn't work.

Putting all of these components together, this is how the blockchain works:

As many blockchain misconceptions exist due to little to no understanding of this emerging technology, it is common for people to see only the dangers of blockchain, which like any other technology, has its pros and cons.

Here are five negative and scary things I am sure won't happen in blockchain:

Our data will become public

Your next thought may be, how about my data going public if a blockchain is hacked?

It is unlikely, but if it happens, only transactions would be leaked with only addresses, which means very little unless you have the address of the various nodes, which is highly unlikely. So, your data going public is impossible in blockchain.

Blockchains make it more difficult for individuals with evil intent to access or change information. No one can modify transactions committed to a public blockchain; however, private blockchains lack that property because they lack a consensus method. By definition, an administrator can make changes.

This myth is a generalization error and a common blockchain myth. Many good projects, especially in the NFT space, ensure usability, like

The challenge is that most people see cryptocurrency as the primary blockchain technology application and a get-rich scheme. They fail to carry out proper due diligence to ensure their optimal potential. Also, consider that investing can be risky, but such risks are reduced if you do your due diligence before investing in a project.

Technology in itself can't be described as bad or good; it depends mainly on how that technology is used. Regulators and governments are concerned that blockchain technology, specifically as applied to cryptocurrency, has the potential to facilitate illicit activity. Cryptocurrency organizations and blockchain forensics firms disagree, citing research such as Chainalysis's second annual Crypto Crime Report, which found that illegal activity accounted for 0.34 % of all cryptocurrency activities in 2020. It is worth stating that this study only reviewed known illegal activities.

Because tampering with the transaction history means that each following block would reflect wrong data, the blockchain's method of chaining data can hinder illicit acts such as fraud. Another essential aspect of blockchain is that the larger the network improves security, as one must convince all these people to change a block collectively. This unique trait makes a massively popular network like Bitcoin so safe.

Technology enables many things, from growth in manufacturing, medicine, and agriculture to music and art. Blockchain, like other technologies, promotes growth and development.

It’s already too late to build in web3

The massive buzz around blockchain's potential contributes to a widespread misperception that all uses for blockchain technology have been exhausted. However, PwC estimates that blockchain technology will have a $1.76 trillion influence on global GDP beyond the next decade; this implies that it has not yet reached its full potential. And every day, more and more startups show up with new ideas. Web3 is one of the applications of Blockchain technology; it is a blockchain-powered internet, which brings about tremendous potential, like increased security, accountability, and transparency.

Blockchain won’t grow out of its niche

Blockchain technology keeps evolving by creating new efficient use cases or modifying existing applications. This evolving cycle demonstrates how blockchain technology can change the world without the help of cryptocurrency. Blockchain development is driven by Fortune 500 organizations in various industries, including banking, fintech, pharmaceutical, technology, agribusiness, retail, and others.

Now, let's look at some of the use cases of blockchain in industries:

Health care: Blockchain has an immutable architecture; it is possible to store electronic health record data in a form that is safe from all instances of hacks and breaches. Several skilled blockchain app developers are also utilizing the technology to aid in developing individualized treatment regimens and eliminating counterfeit medicines.

Internet of things: Infused with blockchain, IoT allows you to exchange data on the platform rather than with a third party. Furthermore, because the devices are addressable with the benefits of technology, businesses gain access to the usage history of the connected devices, which is useful during troubleshooting.

Cybersecurity: When you save all of your business data on a single system, you expose yourself to dangers such as corruption, data loss, human mistake, and hacking. However, the risk of being hacked is almost impossible when you put your data on a distributed, decentralized system using the Blockchain-as-a-Service paradigm. Also, the authentication methods are unbreakable due to the advanced cryptographic techniques used to encode the data and ensure that there’s no alteration.

Supply chain: A business can monitor its supply chain process from the raw material to the end delivery stage by identifying the production processes and components and then recording the information on the blockchain. Walmart, for example, uses blockchain to enable its staff to scan goods in the shop's application and track the goods' transition from the harvesting stage to the store floor.

Interestingly, a previous issue with blockchain cryptocurrency, high-energy consumption, is gradually fading away in light of further development of the blockchain and use case in CO2 gas emission.

It is safe to conclude that Blockchain technology has already grown beyond cryptocurrency, its present niche, and possesses more applications beyond those discussed here. 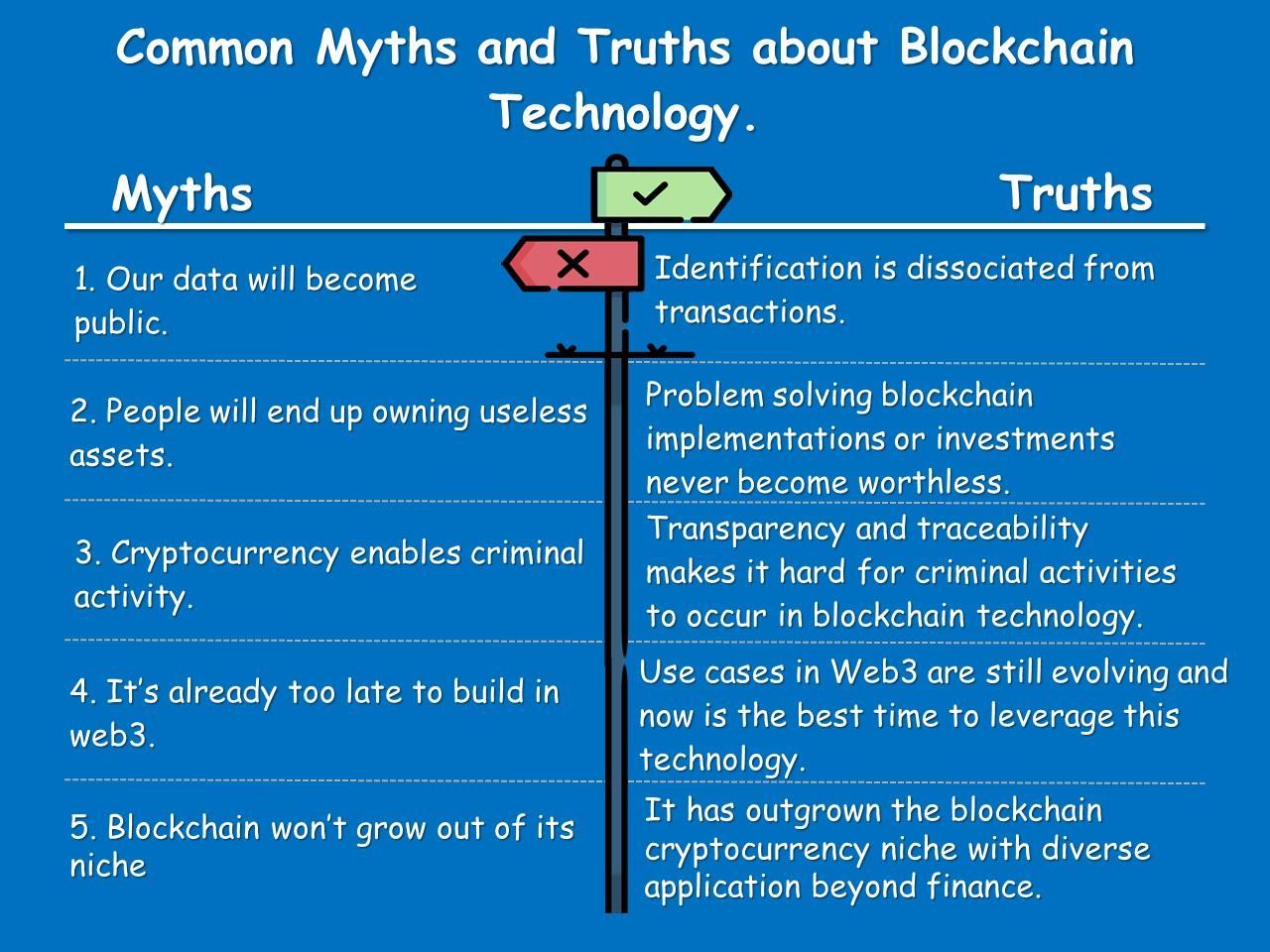 Now that you are sure of some things that won't happen in blockchain and what is obtainable, I recommend you seize the opportunity to be part of the blockchain revolution. I understand utilizing new technology can be daunting, and coupled with many misconceptions about blockchain, one could steer away and miss out on the benefits. While blockchain has immense benefits, you should not blindly implement or invest in any opportunity without sufficient due diligence, research, and an excellent technical team to help build your desired blockchain-powered solution.