We use technical and analytics cookies to ensure that we give you the best experience on our website. You can learn more about it in the Privacy Policy page.
Accept & close
Looking for top Go Developers? They are just a few clicks away.
Hire Go Developers

Go vs Rust: Which Technology Should You Pick For Your Product?

The second decade of the 21st century was illuminated by the appearance of two new programming languages - Go and Rust. Both languages are ambitious projects from leaders of web development, Google and Mozilla accordingly, called to fix the problems of the older existing languages. The competition in popularity of Go vs Rust is intense. In 2016, Go was introduced to the TIOBE Index Programming Language Hall of Fame as the language that has the highest rise in search request ratings in a year. Also, according to Go’s internal survey, throughout the years 2017-2020, around 90% of Go developers indicated that they are satisfied with coding experience and will use the language for future projects.

As for Rust, according to Stackoverflow’s 2020 Developer survey, the language kept the position of the most beloved for five years in a row! More than 86% of developers stated that they would like to continue working with Rust in the future.

The choice of the right web-developing technology is vital for a product’s success. Outdated technology may turn potential clients away. Quoting Emily Dunham (Dev Ops engineer at Mozilla): ‘Asking your programmers to write software within a language from 1960-s is like asking your dentist to go back to using the tools that they had at the turn of the last century.’ If you want to apply the most advanced technology available on the market we recommend choosing either Go or Rust. Read further to discover both languages’ unique features as well as Go vs Rust comparison.

The motivation for the creation of Rust came from an exhausting experience of developing the browser engine with C++. Mozilla development team got tired of constant errors and crashes and decided to develop their own language. The team sought a coding system that would be concurrent and safe at the same time.

The key features that distinguish Rust from other programming languages are:

Although Rust is a great language, it has several disadvantages:

Released in 2009 by engineers from tech-giant Google, Go (also referred to as Golang) is a compiled programming language with a static type checking. It was designed by and for engineers, who advance and maintain extremely large projects. The aim was to create a coding system that will execute equally steady either 100 or 100.000 lines of code.

Now when we are familiar with Go and Rust, let’s compare Go vs Rust with such benchmarks as memory management, speed, the complexity of the code, concurrency, price, and time of development.

By being the most modern programming languages Go and Rust meet the strictest requirements for performance, scalability, and safety. At the same time, none of the mentioned languages is perfect or universal. The field of implementation is defined by language’s uniquely strong and weak sides. Check out the comparison table to grasp once more the essence of the Go vs Rust. 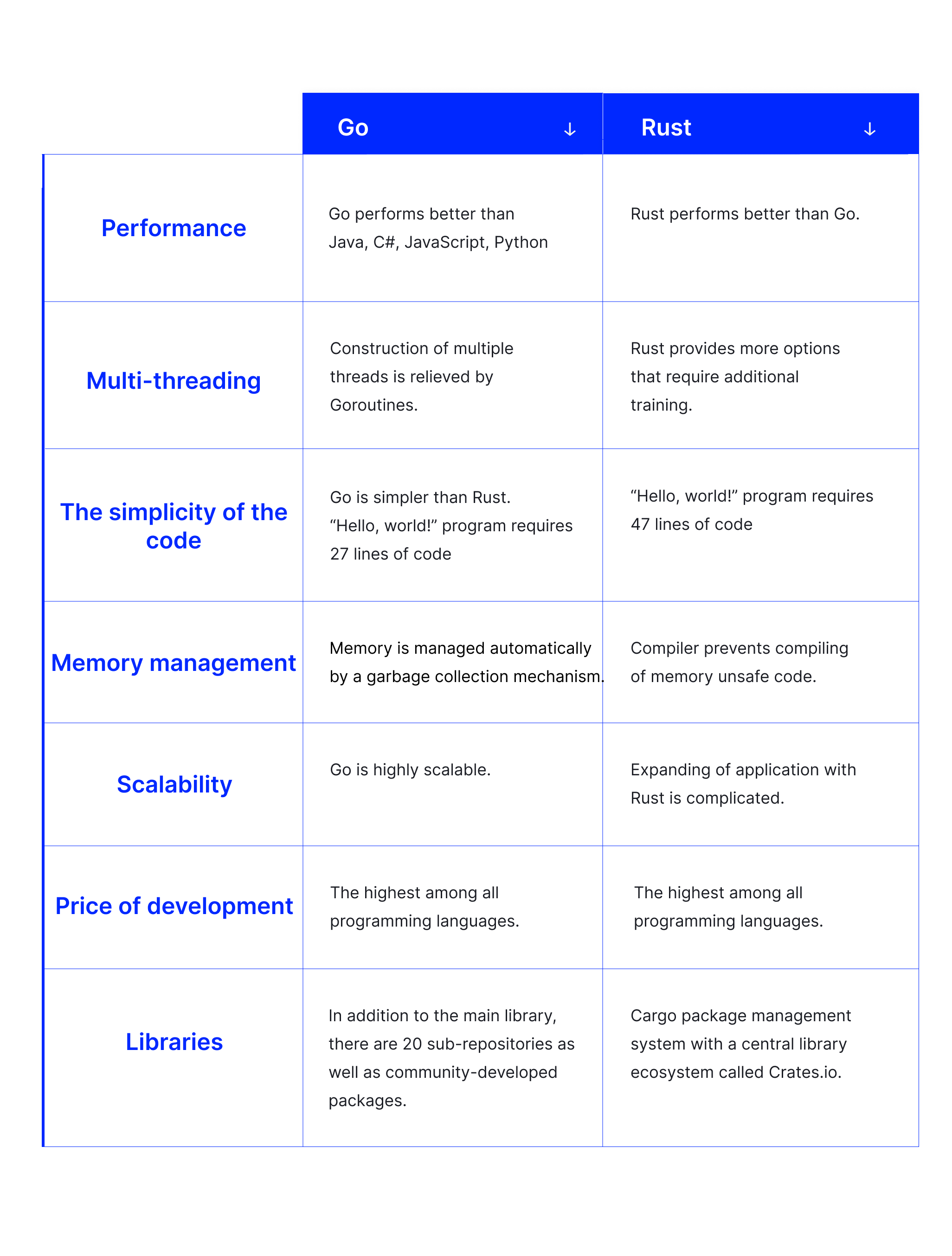 Still hesitant about Rust vs Go dilemma in web development? Consult your idea/project/product with us. We can provide you with technical consultancy and provide you with experts skilled in both technologies, matched with your product and your industry.