The model of the Internet that we are dealing with today is significantly different from what it was at the dawn of its creation. The Web, as well as the methods and requirements for its development, are evolving. This is an inevitable process that experts usually divide into three stages: Web 1.0, 2.0, and 3.0.

And while Web 2.0 has existed for quite a long time, it is gradually giving way to a more progressive form of the web-based on the blockchain and token economy called Web 3.0.

By 2026, about 2 billion people will have spent at least an hour a day in the metaverse, and the total value of the virtual goods market in it may have reached $200 billion. In six years, the revenue of the global Web 3.0 blockchain market is expected to exceed $23 billion, and in 2030, its total value should hit $678 billion!

At Ideamotive, we work a lot under the hood of the web, and we can already see game-changer opportunities Web3 is to bring about. What particular changes to expect and how to deal with them? Let’s figure it out. 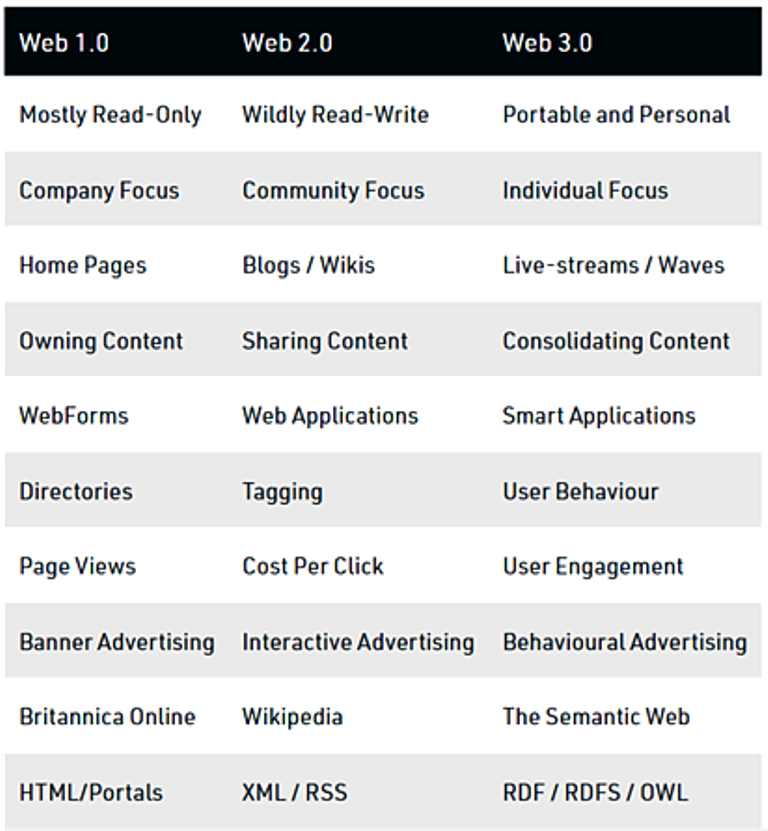 Discussing the concepts of web, we cannot really put Web2 vs Web3 and compare the two. Web2 was initially an upgrade of the most basic form of the web to the format of an interactive, social Internet, and Web3 is its decentralized evolution.

Web3 improves the Internet through the following capabilities:

The Internet is moving to the cloud. Anyway, it now stores most of the content. There are web applications and platforms available for several operating systems at once. To access services, users almost do not need special applications.

The way you interact with the web is changing, as information is shared more frequently than before on social media. The Internet is getting smarter due to the widespread adoption of voice assistants, artificial intelligence, and neural networks.

Users get a number of features that seemed unrealistic until recently. Blockchain at the core makes online content more available and accessible while reinforcing its source security and granting its immutability.

Developers no longer need to deploy applications on the same server and store data in the same database. They work either with blockchain or decentralized applications (dApps). Cryptocurrency plays a big role in many protocols offering services such as identity, data storage, hosting, and others. Consumers pay only for using the protocol, and unnecessary and often inefficient intermediaries are cut off.

But so far, such systems are complex and do not provide full international compatibility. And they still involve processing of confidential information in one or another way.  On the other hand, networks such as Solana are characterized by low latency and transaction costs. Thanks to them, users do not need to go through the traditionally numerous steps to interact with the network. They just need to install a wallet to make payments without restrictions.

The Main Aspects That Blockchain Focuses On

Until a few years ago, no one could have imagined that scalable decentralized autonomous organizations (DAO) would hire employees, organize internships, allocate budgets, and play political games! Or that decentralized exchanges, instant messengers, insurance and job search platforms, etc. will work. But what makes all this happen?

Today, developers are focusing on supporting:

It is important that users can somehow ensure the privacy of their holdings and transactions. This is where usual blockchain functionality shines the brightest, offering uncompromisable data protection and immutability opportunities.

If a blockchain wants to have many users, it must scale. Preferably on-chain because it makes it truly peer-to-peer. For these purposes, platforms designed to create decentralized applications (dApps) of any scale (for example, EOS) are better suited.

Major markets need something stable for daily use. Nobody likes volatile prices. Crypto traders need an alternative to fiat currencies as governments can interfere with their transfers. All this leads to a stable increase in the value of the major cryptocurrencies.

The reliability of smart contracts is related to the language that is used for the code. For instance, Solidity is used in Ethereum. It is a very robust language that is still being developed.

The inability to scale is the biggest obstacle to building public blockchains. The problem occurs mainly when the number of transactions increases. It exists in the main public systems (Bitcoin and Ethereum) because each node must store and perform computing activities.

Public blockchains are constantly in need of huge computing power, high connection speeds, and huge storage spaces. This is not always ensured, so the transaction throughput is not yet at the proper level of quality of service.

Interaction with web applications may require additional software and training. Lack of integration with web browsers makes the web less accessible to most users. On top of that, the most successful dApps host very small portions of their code on the blockchain because it turns out to be expensive.

How to Overcome The Problems

The main problem, of course, is related to scaling. To correct the situation, use:

They affect the properties and attributes of the network, for example, by increasing the size limit or reducing the block verification time. Possible options include:

Off-grid scaling is provided by additional protocols that are installed on top of the main blockchain, from which secondary protocols are used to “offload” transactions. Possible options include:

The following are some effective methods for building consensus:

It is a consensus mechanism similar to the democratic process of controlling a country. In this case, network users can become stakeholders, getting the ability to validate blocks. In the case of Proof-of-Work blockchains, this can help increase the number of transactions processed per unit of time, as well as reduce processing fees. However, there is no consensus in the crypto community regarding the benefits and long-term results of using Proof-of-Stake.

A reputation-based Proof-of-Authority algorithm is responsible for network security through reaching agreement between established nodes. The mechanism involves the operation of the network on special administrator nodes that are pre-assigned.

Delegated failover consensus algorithm with large network scaling, in which cryptocurrency holders choose consensus nodes, which are divided into speakers and delegates. Allows consensus to be reached even if some nodes in the network do not respond or give incorrect information. The purpose of the mechanism is to protect against system failures by using collective decision-making (both healthy and defective nodes), as well as reducing the impact of failed nodes.

In the blockchain, data is grouped into blocks, and only new blocks are allowed to be added to the chain. At the same time, blockchains do not depend on a central server, so data security is better ensured in them. Through block explorers, it is possible to verify that an operation or registration has been completed and that the information contained in the network is validated and unchanged.

The key features of the technology are the sharing and synchronization of digital data according to the consensus algorithm, the distribution of equivalent copies at different points, and the absence of a central administrator (supported by nodes).

Why Should You Work On Solutions?

In a nutshell, it is necessary to get great benefits, which become clear from the Web2 vs Web3 comparison.

Information is stored on the device of each of the network participants, and not on any one server. The network is controlled by a community of participants with the same status and capabilities. All users of the open network have access to the information posted in it, and also participate in the consensus process (determine which blocks will be added to the chain). Privacy issues are addressed by anonymizing personal data.

Network members have open access to information about transactions, agreements, and money transfers since the blockchain uses a distributed ledger. They see the same information picture at the same time. All entries are written the same everywhere and are time and date-stamped.

The origin and movement of each asset are documented by an electronic ledger. Each of the blocks is a separate page on which the history of financial transactions is recorded in a particular period of time. You can track any transaction and get comprehensive information about the current state of the crypto project in the explorer block.

Working with papers takes a lot of time and attention, so it does not exclude the possibility of errors. Blockchain eliminates this need. Users of such a network do not need to reconcile several ledgers, and this significantly speeds up clearing and settlement.

The shared and immutable registry can only be accessed by members of the network with permission. They are the ones who control what information each participant can see and what actions each participant can take. Trust in the network is based on the increased security, transparency, and traceability of the blockchain, which eliminates the need for verification of transactions by intermediaries.

Of course, the blockchain scalability problem is a very hard nut to crack, that's why you need experts that know their stuff right. A great team is the key to success: and we got them. Are you developing a promising project? Contact us for new talents. Our top software developers are here to satisfy your needs in terms of the tech edge and corporate culture.