Monolithic vs Microservices Architecture: What To Choose For Your Product?

Monolithic vs Microservices Architecture: What’s the Perfect Pick for Your Product?

Many businesses out there keep coming across a puzzling choice of monolithic vs microservices architecture, which is perfectly understandable. The underlying architecture can make or break the software’s success - that’s why it’s crucial to settle with the foundation tailored specifically to your product’s needs instead of following trends or competitors’ traits only. Remember - each software product is unique.

But in order to pick the most suitable architecture, one must first get the big picture of major architecture formats. Ideamotive is here to assist you with that by guiding you through all the necessary details of both approaches. Let’s dig in and see what makes them the way they are.

What is a monolith?

As an older and more conventional way of building applications, a monolithic approach is about creating an application whose structure literally resembles a single big block, hence the name. A Monolith acts as an inseparable unit that forms a uniform layer and is usually composed of three interconnected elements and modules - a relational database, a server-side application, and a client-side user interface - while having only one yet extensive codebase.

Alternatively, microservices require the application to be split into a set of more condensed independent small services, each with its own function, database, codebase, and lifecycle. Each part of the microservices-based structure is developed and maintained separately and is later connected through a fitting API. This newer approach is proven to be more complex and arduous yet in some cases more adaptable due to the whole “brick-laying” approach.

What is their Scope? What problem(s) do they solve?

The software development industry is always on the lookout for scalability and efficiency - from making sure teams are properly organized to delivering projects faster yet still scrupulously. By choosing either of these approaches, both monolithic and microservices developers strive for streamlining their internal process, software scaling capabilities, and time-to-market terms.

Why choosing between them is important?

In the monolithic vs microservices debate, it all comes down to context. Each project has a different team structure, different requirements, and limits (be it functional, budget-related, or otherwise). The amount of experience of each team member, as well as deadlines and specific budget, all have to be put into consideration when choosing the right type of architecture for your particular case.

Are they in demand?

Nearly 70% of profiled companies have now implemented the microservices approach in one way or another in the development process or production. Half of them are medium-scale organizations that focus on boosting the frequency of their product releases.

Even though these stats show the rapidly growing popularity of microservices, monolith still stands the test of time and should not be discarded - some even think it’ll still be relevant in the future (as opposed to a more common conception of monolithic architectures gradually becoming totally obsolete). Right now, we can safely say that both approaches can do excellent if used correctly, and our next focus should be on what sets them apart.

What Is the Underlying Difference Between Monolithic Architecture vs Microservices?

The most obvious difference is the architecture itself. Monolith gets the database, the user interface, the front- and backend, and the business logic incorporated under a single codebase while microservices get them subdivided and operated independently. In the former, testing and deployment processes are swept under one line. By contrast, the latter scatters them across various databases and adapters.

Let’s see what else is different.

Some of the advantages of choosing monolith for your project are:

On the flip side, the following are considered the most common disadvantages of monolithic architecture:

For a microservices architecture, the benefits are: 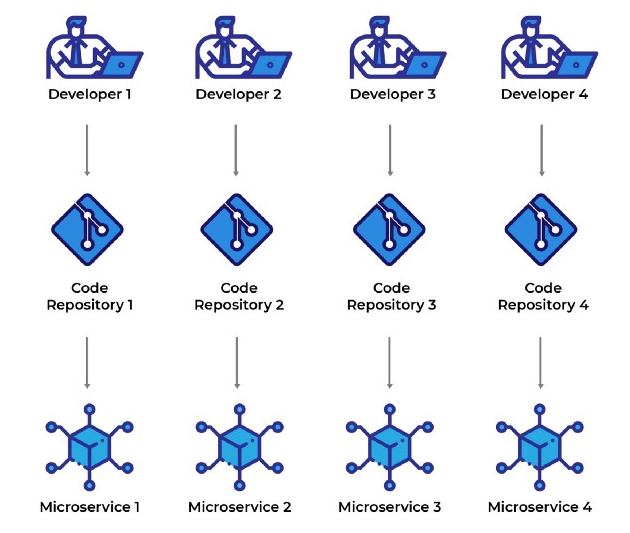 How to Approach the Development of These Types of Architecture?

While many of the important considerations of going monolithic vs microservices are mentioned in our previous chapter of pros and cons, it is crucial to discuss what is essentially needed in terms of resources and effort to turn either approach into a successful project in the long run.

What roles and resources are needed?

Here’s what to consider when choosing monolith:

At the same time, microservices require you to count for the following:

What Impact on the Product Do They Have?

The choice of monolithic vs microservices is also affected by how much and how exactly the architecture will impact the product as a whole (during development and deployment) and how will users perceive any of such changes.

The impact of a monolith

Modules being hosted in one place represent the original simplicity of development. All the deployment parts, as well as any updates, come as one package - this facilitates the delivery and ensures easier monitoring.

Testing, though, can take more effort if there are too many bugs present, considering you have to scan the entire application from the start. Another negative impact that comes from a single failure is that the whole product can be compromised and users will definitely notice.

The impact of microservices

One of the best examples of the positive impact of microservices is eCommerce with its array of small yet important parts, operating as one but managed individually. This approach opens new horizons for business owners that want to expand and up-scale their projects.

The continuous delivery and the fragmentation of several services in an application helps customers not to feel any discomfort due to the product being taken down for repair - even if there’s any mistake in any part of the code, the maintenance process gets usually unnoticed by the user.

When Should You Use Them?

Another major factor when deciding to go monolithic vs microservices is the architecture’s suitability to your product. To illustrate - here’s when it’s more advisable to choose Monolith:

And here’s when it’s much better to go for a microservices-based application instead:

At what stage of company development is it worth starting to implement them?

Usually, new market exploration-focused projects are done as cheaply as possible, and monoliths are definitely cheaper. If that kind of project grows to a size, where it's feasible to split the development team (let's say more than 6 developers), then it'll be easier for them to also split the app. It doesn't have to start with a complete overhaul - it can be just one component split from the rest of the app and transformation into microservices can progress when there's good business (or team size) reason to split out new fragments of the app into a new, separate service. Remember, that it's not only developers that need to be doubled - business analysts, dev-ops engineers, testers - everything needs more time and more people when going with microservices.

For whom are they meant?

Those are definitely meant for bigger teams. It's infinitely easier for one-two devs to work on one code-base instead of switching between multiple projects, while when the team grows it might become hard to handle so many people working on one codebase and constantly changing things.

What type of businesses usually implement them?

There's no specific type of business that is more suited for microservices than other. Almost every web app has at least some parts that can be made into its own microservices, e.g. user accounts handling, payments, etc.

Are they fit for start-ups, scaleups, enterprises?

Start-ups usually have a constrained budget, so it'd be reasonable not to choose anything more complicated than a monolith for those. Even enterprises can build simple projects that are better suited for monolithic applications, but big budgets can be also used to future-proof apps a bit and start with micro-services from the scratch. Scaleups can start to split out some services from their main monolithic app when their team grows to a size that allows them to manage multiple projects efficiently.

For which type of application and company are they a better choice?

Apps that do a lot of loosely connected things will be better suited and easier to split into services, but every mid-size to big app can probably be built in at least 'monolith with services around' architecture, if not a full microservice one. If a company has previous experience working with one type of infrastructure, then it should build a new project using the same type.

The Future of Software Development with Monolithic vs Microservices Architecture

Although it’s almost impossible to predict the future and list what trends are coming our way next, there are definitely as many people as there are opinions. Some think we shouldn’t beat a dead horse and still use monolith in our applications while others believe the opposite.

Regarding Microservices, there are a few trends worth mentioning. First, multiple microservices and the multi-cloud environment - utilizing several cloud environments will bring better optimization and database management. Apart from that, serverless architecture will also help avoid the necessity of large initial investments.

And last but not least - a few monolithic vs microservices examples to showcase how both these architectures fit right in.

One of the most well-known companies using this approach is the web version of Facebook (Meta) with its monolithic PHP backend and the choice to upscale it rather than fragment it into smaller services.

Other examples include Reddit with its original database and Instagram’s server app. To get the gist of the variety of regular Monolith applications, check out this list of more than fifty open-source projects on Github using the monolithic architecture.

The most popular examples of big companies employing the advantages of Microservices include:

So which one should you choose for your product after all? If it's the multiple-block-like architecture you're after and not a single brick, we advise you to start right away with the microservices approach instead of switching to it from monolith along the way.

However, if you're opting to build a smaller application and manage its nicely structured monolithic architecture, it can also be a great option in the long run. Whether you pick microservices or the monolith - nothing is set in stone. Pun intended. And whatever path you'll choose or if you’re still not sure, our team at Ideamotive is here to help you with it.