Python vs R: What Language Is Better For Data Science Projects?

Intro: why this text and what is inside?

Beginners in Data Science often have the question of which programming language to choose as the main one - a specific one created specifically for data processing - R, or the universal Python, which is popular in other areas as well. Tech business owners and startups also have questions like when Python or R is the right choice for Data Science, what specialist will be more useful for the data science team, or which language to choose for machine learning: Python or JavaScript.

Both languages (Python and R) are supported by open-source licenses (as opposed to commercial SAS and SPSS tools or proprietary MATLAB) and traditionally are considered the most popular. The rapid development of Data Science leads to a quick change of positions of these two programming languages. In this article, we will analyze the trends in the confrontation Python vs R for data science, the advantages, and disadvantages of these two programming languages and is it possible to combine them in 2020.

Python vs R for data science: what is Python?

Since its release in 1991, the Python programming language has been extremely popular and widely used in data processing. Here are some reasons for its popularity:

However, unlike R, Python does not have specialized packages for statistical computations. The main audience of Python is software developers and web developers. Most of the functional modules were created especially for them, which allow Python programmers to download data, perform complex operations with them, model, and analyze.

Python vs R for data science: what is R?

R is a programming language for statistical data processing and graphics work, as well as a free open-source computing environment within the GNU Project. The language was created as a similar language to S, developed in Bell Labs, and is its alternative implementation, although there are significant differences between the languages, most of its code in the S language runs in the R environment.

It is widely used as a statistical software for data analysis and has actually become a standard for statistical programs.

The language and environment are available under the GNU GPL license. R uses a command-line interface, although several graphical user interfaces are available, such as the R Commander package, RKWard, RStudio, Weka, Rapid Miner, KNIME, as well as tools for integration into office packages.

In 2010, R was named one of the winners of Infoworld Magazine's Open Application Development Software category.

In terms of performance, R programming for data science is not the fastest and can sometimes eat a lot of memory when working with large data sets.

Python vs R for data science: advantages and disadvantages

Let's consider the advantages and disadvantages of Python and R, noted by the data analysts who use them. Both programming languages have pros and cons, some of them are noticeable, some can be easily ignored.

Advantages of R for data science

Disadvantages of R for data science

Like any programming language, R has some disadvantages. Each programmer decides on their own what disadvantage can not be ignored and what should not be noticed.

Advantages of Python for data science

Python is a widely-used programming language. A lot of programmers like it for its simpleness. If it is simple, it does not mean it has low functionality.

Disadvantages of Python for data science

Despite Python being an object-oriented programming language, it has some disadvantages for Data Science. Maybe they are not crucial, but each programmer or data science team before they start work on a Data Science project, decide on their own.

Python vs R for data science: is it possible to combine the advantages of both languages?

The battle continues Python vs R for Data Analysis. There are people in the Data Science community who use Python and R, but the percentage is small. On the other hand, it is often the case that adherents of only one programming language would like to use some features of the other language.

For example, R users sometimes crave object-oriented features built into the Python language. Similarly, some Python users dream about the wide range of statistical distributions available in the R language.

Right now, there is a growing number of data scientists who know both languages and use one or the other as needed. The question arises - is it possible to combine the advantages of languages in one application? For example, it would seem logical to be able to call the R library from Python, and for statisticians familiar with Python, to run programs in Python directly from R. Both languages can perform these operations using third-party libraries:

Such solutions allow not to switch from one system to another and create programs from ready-made solutions within one application, using modern Python modules and previously implemented specific packages from R.

Both R and Python are reliable languages, and one of them is actually enough for the task of data analysis. However, they have their pros and cons, and if you use the strengths of each, a data science team can do a much better project. Anyway, knowing both gives more flexibility and increases chances to work in different environments. 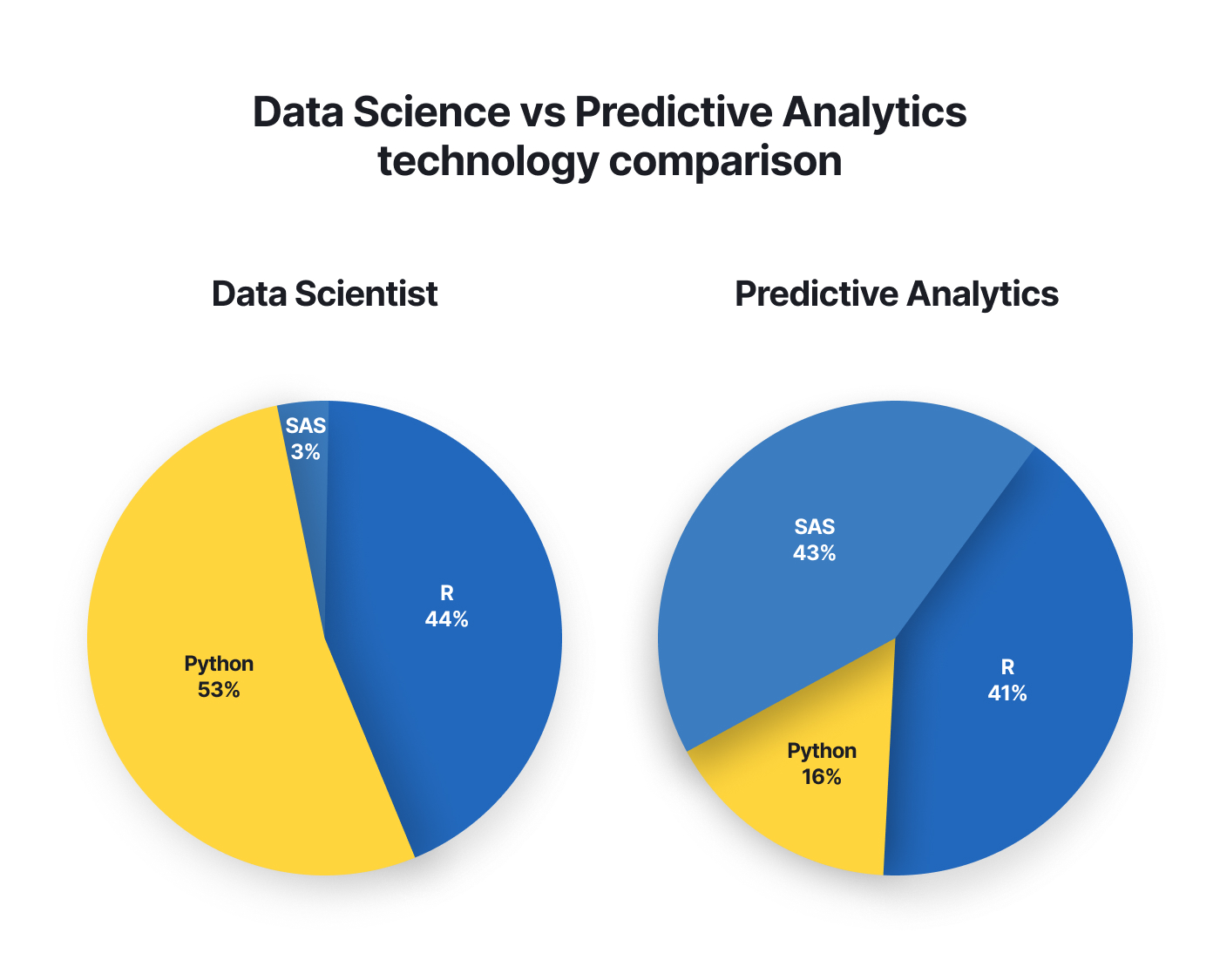 Both languages appeared in the ‘90s, and have already managed to build up powerful ecosystems of users. As an example, both communities have many active members on Stack Overflow (Python, R). In the beginning, R was used only in the academic environment, but as interest in Data Science grew, it came to commercial applications as well. However, in recent years, Python has acquired a lot of tools for data analysis and managed to provide the necessary competition. The ability to use Python to quickly embed data analysis into web applications makes Python even very useful.

The programmer you choose depends on the tasks you're going to accomplish and the time you're willing to devote to development. If you plan to create a great project in data science, we recommend a programmer who knows both languages. A person with knowledge of R concepts and libraries will be one step ahead of people working only with Python. A person that is familiar with R will be especially useful if your data science team wants to use not only ready-made algorithms in Python libraries, but also apply all the intellectual power accumulated by statisticians.

Still not sure what programmer do you need? Let us know, we will help you decide and provide you with data talents skilled in Python or R, matched with your product and your industry. Our company has the widest list of Python and R specialists who will perfectly fit your company/project/data science team.

Python vs. JavaScript. Which Is Better For Your Machine Learning Project?

Python vs PHP: Which Technology Will Dominate The Future Of Web Development?

Looking for Python development experts to join your team?

There are dozens of vetted Python professionals in our talent network.