We use technical and analytics cookies to ensure that we give you the best experience on our website. You can learn more about it in the Privacy Policy page.
Accept & close
Looking for top PHP Developers? They are just a few clicks away.
Hire PHP Developers

The State of PHP Development

PHP is one of the oldest open-source programming languages. Developed over 26 years ago, PHP has evolved from a simple web page builder to become a popular scripting language for web applications and APIs.

With each version release comes extensive functionalities and features that simplify and speed up software development processes. In this article, we dig deeper into the state of PHP in 2021, how it has changed since last year, and its future development.

Check out the State Of Ruby On Rails Web Development At The Beginning Of 2021.

The State of PHP at the Beginning of 2021

One common misconception is that PHP is outdated. Some programmers see it as a dying language, which could not be further from the truth.

PHP remains one of the most popular programming languages in 2021. W3Techs data shows that as of January 1st, 79.1% of websites with a known server-side programming language use PHP. This figure is a slight but notable increase from the December 2020 usage statistics of 79%. 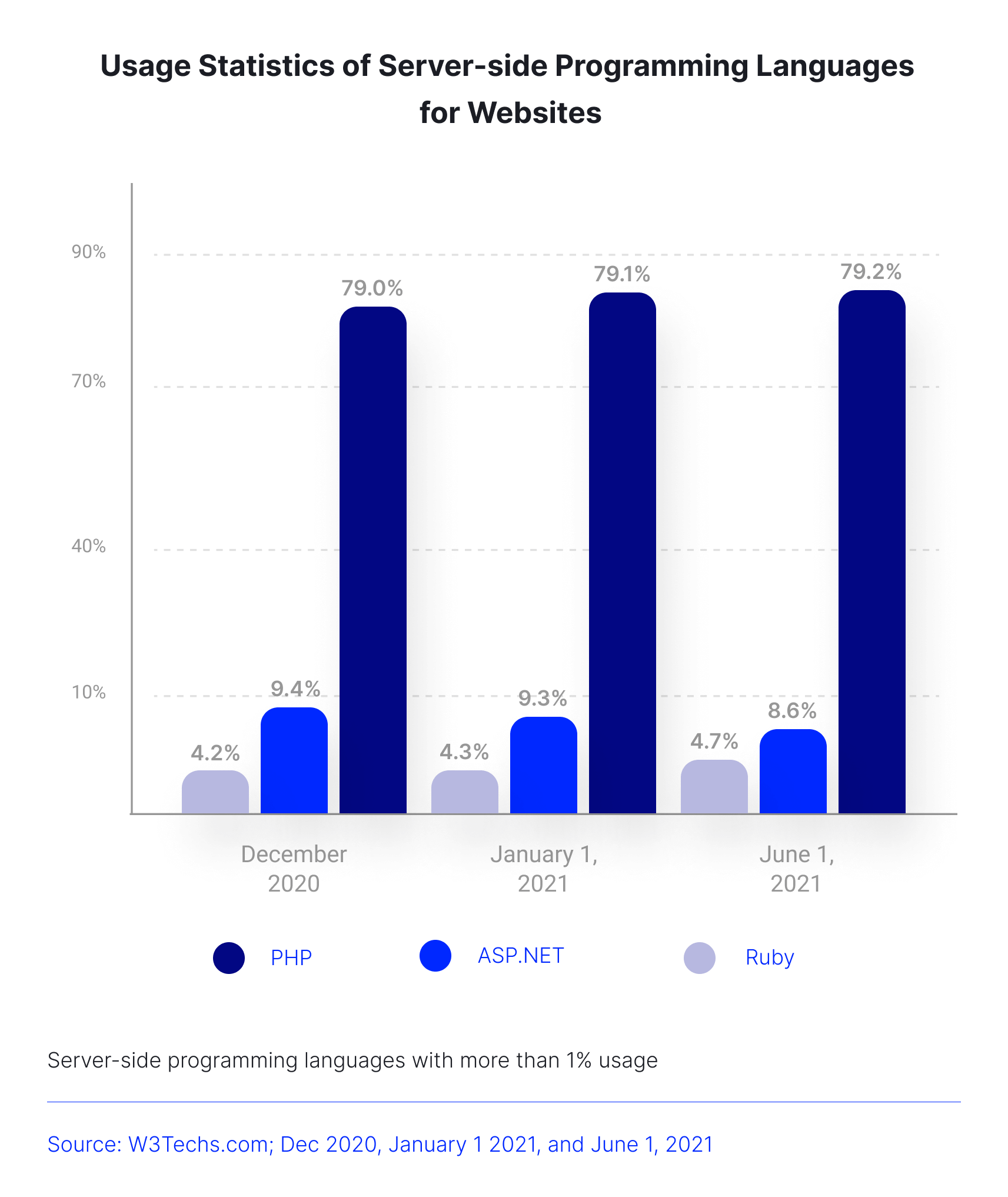 This may be due to the introduction of additional functionalities in the most recent version— PHP 8— which was released late 2020. This version introduced improvements and new features like:

JIT improves PHP execution speed. However, this performance improvement is more substantial in mathematical codes rather than web application codes. The feature also opens up the possibility of moving codes from C to PHP. JIT compiler is enabled through the OPcache extension.

This feature is an improvement on the previous version's Weak References. Weak Maps hold a collection of references that allows objects to be garbage-collected if there are further references. It improves performance and memory management.

Before PHP 8.0, only two union types were supported. They are the nullable unions using the ?Type syntax, and the array or Traversable union using the special iterable type. In this latest version, arbitrary union types are supported in function signatures and are defined using the T1|T2|... syntax. The advantages of this feature include:

In the previous version 7.4, metadata can only be added through doc-comments. The PHP 8 introduced attributes that enable developers to add metadata to declarations in a structured way without the need to parse docblocks. Attributes are added before the declarations (functions, classes, constants, properties, methods, and parameters) they apply to. They can be declared before or after a docblock comment.

Other improvements in PHP 8.0 include:

Popular Frameworks for PHP in 2021

There are up to 38 PHP frameworks available. Here are some of the popular frameworks in 2021:

Laravel is a free, open-source PHP web framework with robust features and applications that simplify web development. It has a Model-View-Controller (MVC) based architecture and features like Eloquent ORM and artisan tools that enable web developers to automate repetitive coding tasks and make the development process faster. Other functions include built-in authentication, easy integration with popular email services, Blade templating engine, and many more.

Companies using Laravel: MasterCard, 9GAG, BitPanda, and Razorpay among others

Symfony is a set of reusable PHP components and a web framework for web application development, APIs, and microservices. It is notable for its easy integration and features that; reduce repetitive tasks, eliminate strict dependencies, and improve adaptability. Symfony allows you to use full-stack customization to develop a complex application with various functionalities. Also, you can use the brick-by-brick framework to build a product using certain functionalities or install a specific brick for your desired functionality.

CodeIgniter allows developers to build dynamic apps using PHP. Although CodeIgniter supports the MVC pattern, it is optional, thereby making this framework non-restrictive. Although it has fewer features than Laravel, it is powerful and is well-known for its lightweight, easier installation, and speed. Some CodeIgniter features include security and XSS filtering, email integrations, flexible URI Routing, data encryption, Query Builder database support, and more.

Yii—an acronym for "Yes It Is"—is a PHP framework that follows the MVC architecture pattern and has robust features that accelerate web development. It supports DRY (Don't Repeat Yourself) design to eliminate redundancies and improve code readability. Yii has a web-based code generator called Gii that developers can use to generate models, controllers, forms, modules, extensions, and CRUD. This framework supports layered caching schemes such as data, page, HTTP, and fragment caching to improve the performance of web applications. Other features are unit and functionality testing, security measures, error handling and logging, easy integration with other frameworks, and more.

Just like its name suggests, Slim is a PHP microframework for developing powerful, small-scale web applications. It is lightweight, supports all HTTP methods (GET, POST, PUT, DELETE), and has Url routing and matching features. This makes it one of the best frameworks for building a REST API. Some other functionalities include dependency injection, middleware, error handling, and PSR-7 support.

Phalcon is an MVC-based PHP framework implemented as a web server written in Zephir and C, making it faster than other PHP frameworks. This framework is loosely coupled and enables developers to use all or specific components in isolation depending on their project requirements. Some of its features and functionalities include dependency injection, low memory consumption, templating engine, and security features that prevent password hashing and CSRF. 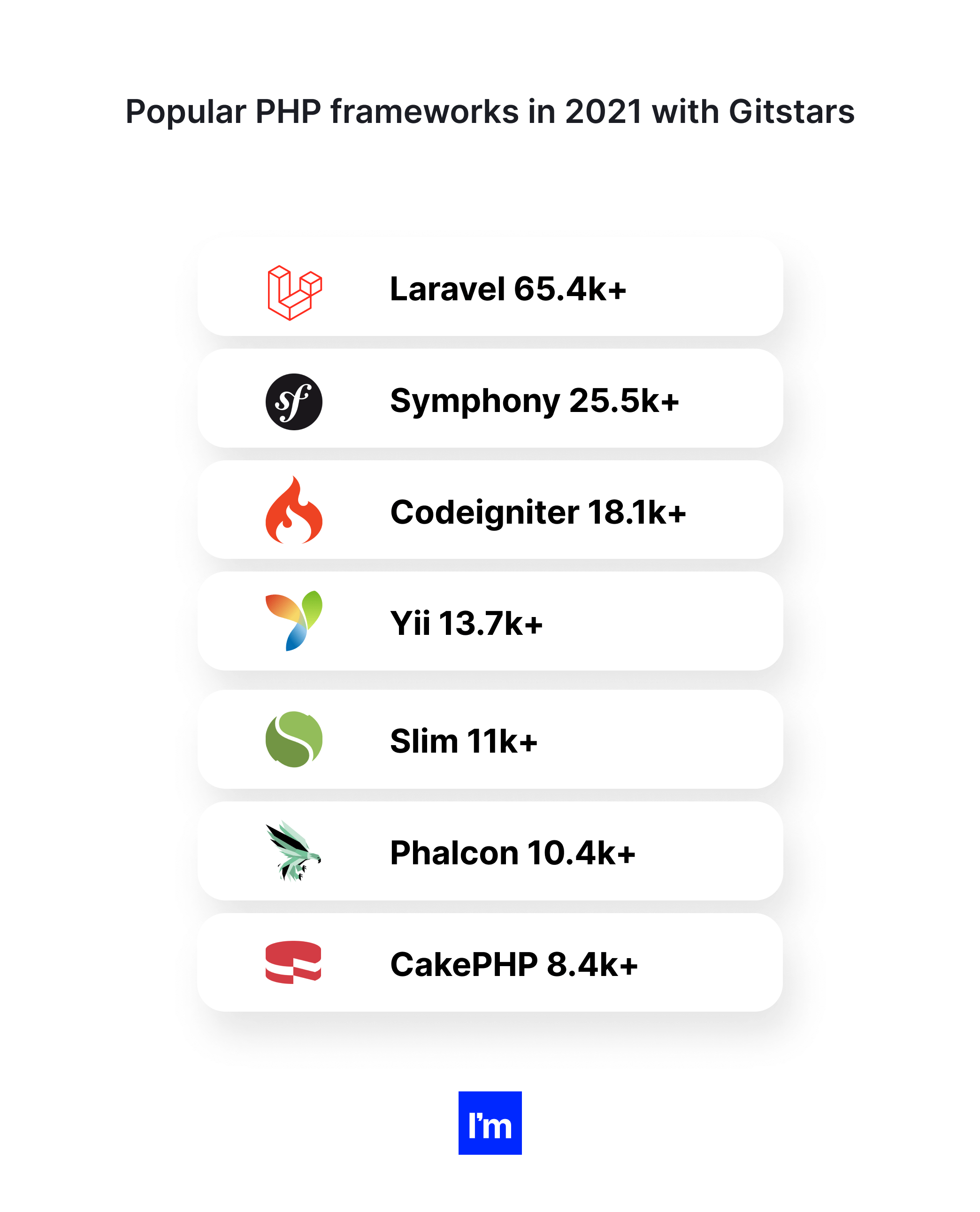 New Version Updates for PHP in 2021

As we mentioned earlier, there have been some updates on the PHP 8 version in 2021. These updates are mostly minor tweaks and improvements on syntax and bugs. Here are some of the bug fixes in each version update according to the PHP changelog:

Not released due to malicious commits in the PHP source code repository.

Some fixed bugs include:

See the PHP changelog for more bug fixes on each version release.

Also, read up on PHP vs. Java to find out the best choice for web development. 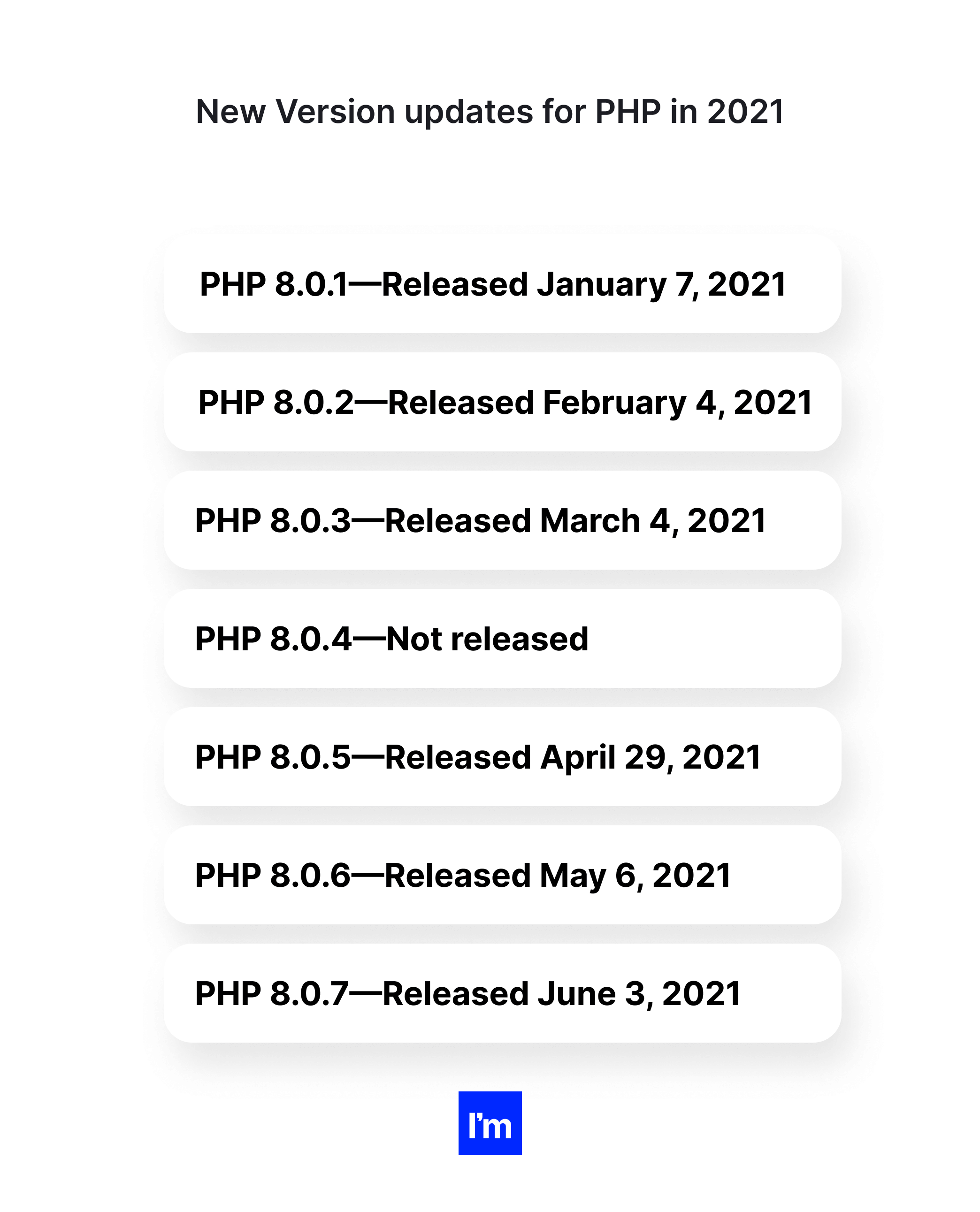 The recent PHP 8 version brought new major features like; the Just-in-time Compiler, Constructor Properties, and Named Parameters which opened up the language to new possibilities.

Currently, an incoming version 8.1 is in the works. This version will be released on November 25, 2021, according to the PHP Development Team's timeline. Here are some of the expected features in the PHP 8.1 version:

Also known as green threads, fibers in PHP 8.1 are a low-level mechanism that allows you to build interruptible functions. With this feature, you can resume and pause functions within your program in isolation. Although this proposed feature will not be purely asynchronous in this version, it opens up this possibility in future versions.

Enums assign names to a collection of constant values. Before this, PHP had no built-in enum type but instead relied on a basic SPL implementation. This addition offers a more structured way to show the status of objects. It will also generally reduce errors and make it easier to read programs.

PHP classes are compiled and cached separately and then linked at runtime on each request. The incoming Inheritance cache improvement eliminates this compilation overhead by linking a set of classes just once at first request and storing them in an Opcache shared memory.

Other notable features are:

There are several programming languages with one or more having the same functionalities, close features, and best use cases. Although most developers believe that Python and JavaScript may edge out PHP, over 6,319,253 websites currently use it. Popular companies that use PHP in their tech stack include Wikipedia, Facebook, Tumblr, WordPress, Flickr, WhatsApp, and Slack.

Also, as we mentioned earlier, nearly 8 out of 10 websites with a known server-side scripting language use PHP in one form or another. This number may be higher when you consider undetected websites that may use PHP.

Generally, PHP is used for building web applications but is best suited for developing a WordPress website. This is because a substantial part of the WordPress core—including its themes and plugins—is written in PHP.

You don't need advanced knowledge of PHP to create simple WordPress sites. However, if you want to develop WordPress plugins and themes from scratch, or make advanced customizations and changes, using PHP gives you a better chance at creating a robust application.

PHP's extensive features coupled with the growing demand for the user-friendly WordPress CMS make it a good choice for web development in 2021.

Additional read: Python vs. PHP: Which Technology Will Dominate The Future Of Web Development?.

The current state of PHP shows that it is far from dead or dying. Instead, yearly releases usher in features that enable developers to build robust business-critical web applications and APIs for companies.

Looking for PHP developers? Contact us today. We have a vast pool of PHP and other developers in our network. We will make sure to connect you with talents perfectly fitted for your industry and company culture.

Looking for talented developers to build or scale your web product?

Python vs PHP: Which Technology Will Dominate The Future Of Web Development?

PHP vs Ruby on Rails – Which One To Pick For Your Next Web Product?

Looking for PHP development experts to join your team?

There are dozens of vetted PHP professionals in our talent network.