Why Use Ruby on Rails for Enterprise Application Development?

In the world of programming languages dominated by Java, JavaScript, and Python, Ruby is considered an outsider. According to the most recent survey performed by StackOverflow, only 7.89% of developers use Ruby as their everyday programming language. Ruby’s position in the TIOBE Index is also low. Considering such data, you may ask yourself: why should I use Ruby on Rails for my Enterprise Application? Read further to learn more about the advantages of RoR for enterprise software.

What Is Ruby on Rails?

Ruby on Rails is a web application development framework designed by David Heinemeier Hansson and released in 2004. Back then, Hansson was working on a project management platform called Basecamp and was looking for a convenient tool that would facilitate the development. Through the article published in IAAA Magazine, Hansson got acquainted with Ruby. The language appeared to be simple and easy to understand so that Hansson decided to choose Ruby for enterprise applications. To build a Basecamp, Hansson had to design database integrations, the controller code, the template languages, and other units required to construct web applications by himself. The written code became a ground stone for the new framework - Ruby on Rails.

During the first year, the Ruby on Rails enterprise app development captured the attention of such prominent software engineers as Martin Fowler and Dave Thomas who were famous as advocates of agile software development methodologies. The framework perfectly matches the principles described in the Agile Manifesto. Pre-written solutions for the common tasks provided by Ruby on Rails make the development process quick and flexible. A convention over configuration (or coding by convention) software design paradigm that is a unique feature of Ruby on Rails helps increase productivity. As was explained by Hansson, the aim of Ruby on Rails is to save developers from the jungles of recurring unnecessary decisions.

Once beloved by start-up companies, Ruby on Rails is used nowadays by many enterprises regardless of their size. Big companies that use Ruby on Rails are Airbnb, Zendesk, Square, Twitch, and Shopify.

What Is Enterprise Application Development?

Enterprise Application Development is a complicated process of building applications for business prospects. Those applications are complex and highly customized for strict business requirements. The complexity of an app assumes a large number of users, the inclusion of several components, the ability to process big chunks of data and execute difficult commands in parallel. Enterprise applications usually are deployed on the cloud platform or on-premises infrastructure inside corporate networks. Designing and developing an enterprise app implies a satisfying myriad of separate requirements.

There are not so many frameworks that can meet business application development requirements, but Ruby on Rails enterprise is one of them.

Interested in how Ruby on Rails performs compared to other web development frameworks?

Check our Ruby on Rails vs. Django guide! 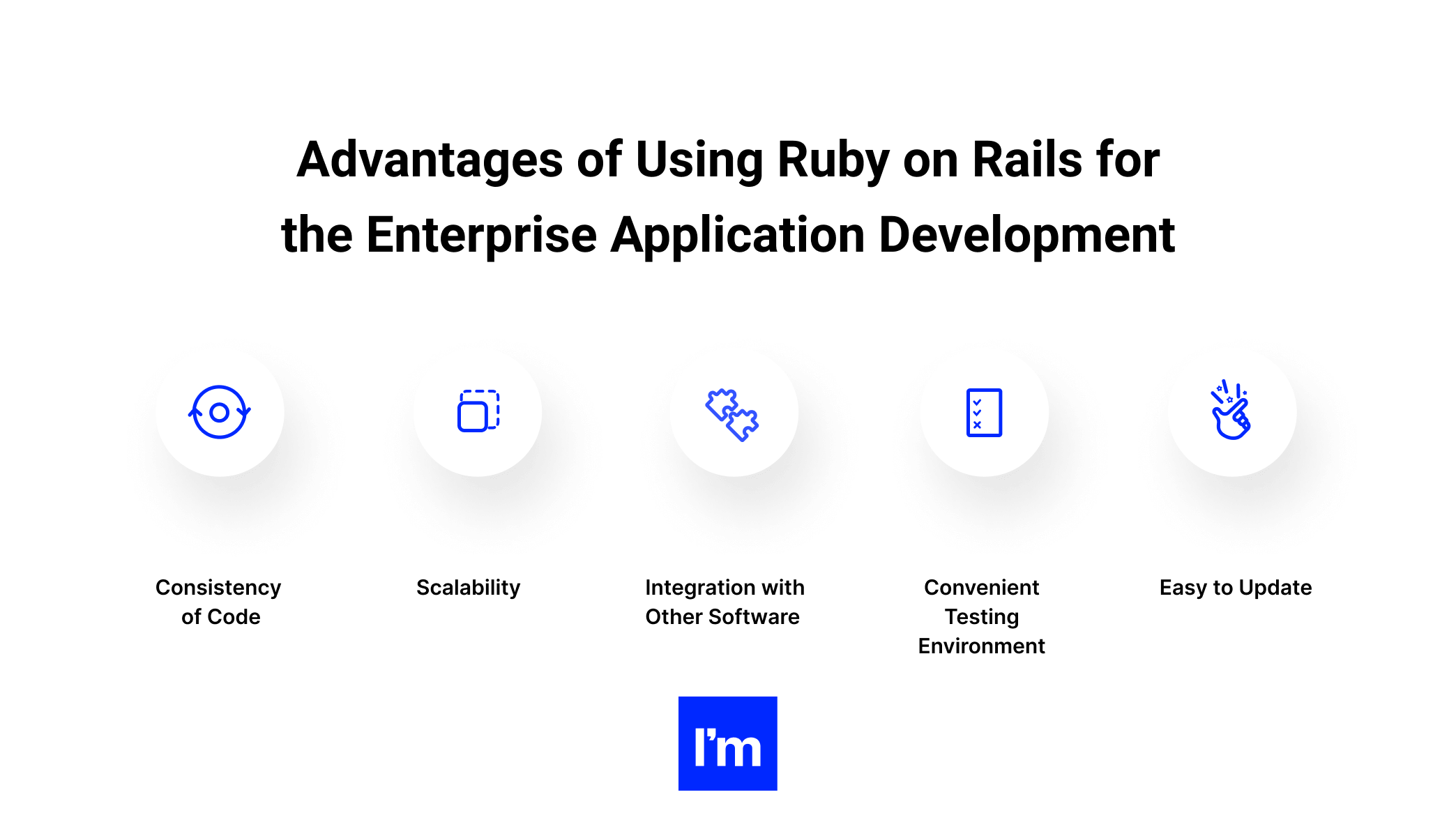 Ruby on Rails is a great framework with many exciting features. Some of them we have described before in our Ultimate Ruby on Rails Guide. To avoid repeating, we will focus in this article on benefits relevant for the development of enterprise applications.

David Heinemeier Hansson and his framework are often criticized for being too autocratic in terms of how they implement much of the infrastructure needed by a web application. Many of the implementation decisions are dictated by the framework design. In fact, though Ruby on Rails limits the freedom of developers’ choice, a benefit of such an approach is that any engineer who works with RoR delivers the same code.

Convention over configuration philosophy ensures that a code written by one programmer can be easily understood by another programmer. Such code consistency is especially important for enterprise projects that engage several independent teams. That means collaboration goes smooth, development goes fast, and a larger set of open source libraries to enhance RoR is available.

The scalability of the software is an important property for businesses that expect rapid growth of users. Otherwise, you risk getting into a bottleneck situation when the increase of revenue is limited due to technical issues. Luckily, RoR-based applications are easy to scale. With the framework, you can develop an app that simultaneously administrates 10,000-100,000 users who operate on the same number of objects. A combination of Memcached and MySQL allows increasing the number of processed objects up to several million. A monolith architecture will be enough for the cases when the app supports several thousands of users. A wider audience will require distributed architecture.

Integration with Other Software

Enterprise software is a complex product that includes different units. Reliable integration between components as well as a smooth flow of data between them is a necessary condition for the application’s stable work. Connecting several third-party applications is a challenge, but not with Ruby on Rails. The framework provides enough libraries that facilitate the integration. For example, a connection with Oracle databases is enabled by the Ruby/Oracle Call Interface (OCI8) library, - a database driver grounded on Ruby/DBI (Database Interface module).

An important principle of the Agile approach is the emphasis on the rapid testing of the software product. It is done to eliminate bugs and malfunctions during the early stages of product development and hence increase the quality of the product. With Ruby on Rails, writing tests is as easy as shooting fish in a barrel. A framework for unit and functional tests is created automatically when you apply helper script/generate to create controllers and models.

By filling the framework you can get pretty good test coverage for the fun functionality you write. A testing environment in Ruby on Rails is created by default along with development and production. The environment is capable of simulating browser requests so that you can test your app's response without engaging the real browser.

Enterprise applications are built for a long service during the years and years ahead. Nevertheless, neither software can last forever and requires time to time updates. The same is fair for the Ruby on Rails framework that releases a new version every three years. Upgrading the framework to the latest version is not so difficult.

According to the official guide, the update will require only four steps: moving to the newest version, writing the tests, fixing malfunctions, moving to the next minor version. Although upgrading may seem inconvenient, it also brings some benefits. The product becomes safer since known vulnerabilities are eliminated. New features that can boost your product also appear. 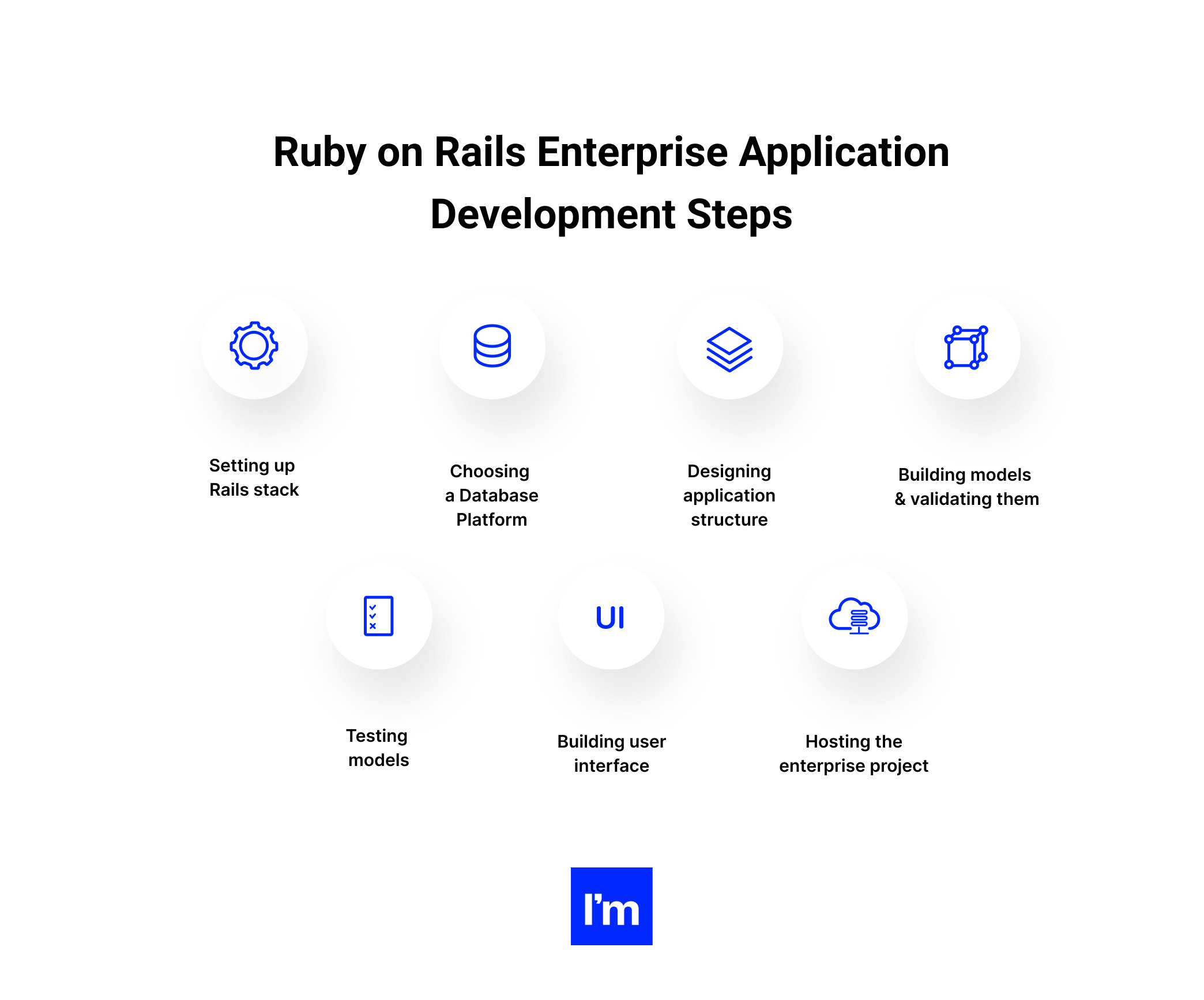 Ruby on Rails enterprise software development is a complex process that unfolds in several phases. The most significant are:

Examples of Ruby on Rails Applications

Enough of theory! Let’s have a look at the real-life cases of enterprise Ruby on Rails software. During the last 17 years, RoR was applied by many prosperous companies. Their experience proves that a framework is an effective tool that suits well for the development of all kinds of products: from e-commerce apps and marketplaces to streaming and CRM platforms.

Launched in 2008, Airbnb is a marketplace that connects people who plan to rent out their houses with people who are searching for accommodations. The marketplace currently operates in more than 100,000 cities and 220 countries worldwide. Statistics show that there are 5.6 million active listings and 4 million hosts. A total counting of users reaches 150 million clients. The marketplace became popular because of such features as a wide selection of property kinds, highly customizable search, and reliable protection for hosts and guests.

The other factor that facilitated Airbnb’s expansion is a clever choice of web development technology. By using Ruby on Rails, Airbnb’s engineers ensured that their web application can scale and administrate millions of users. 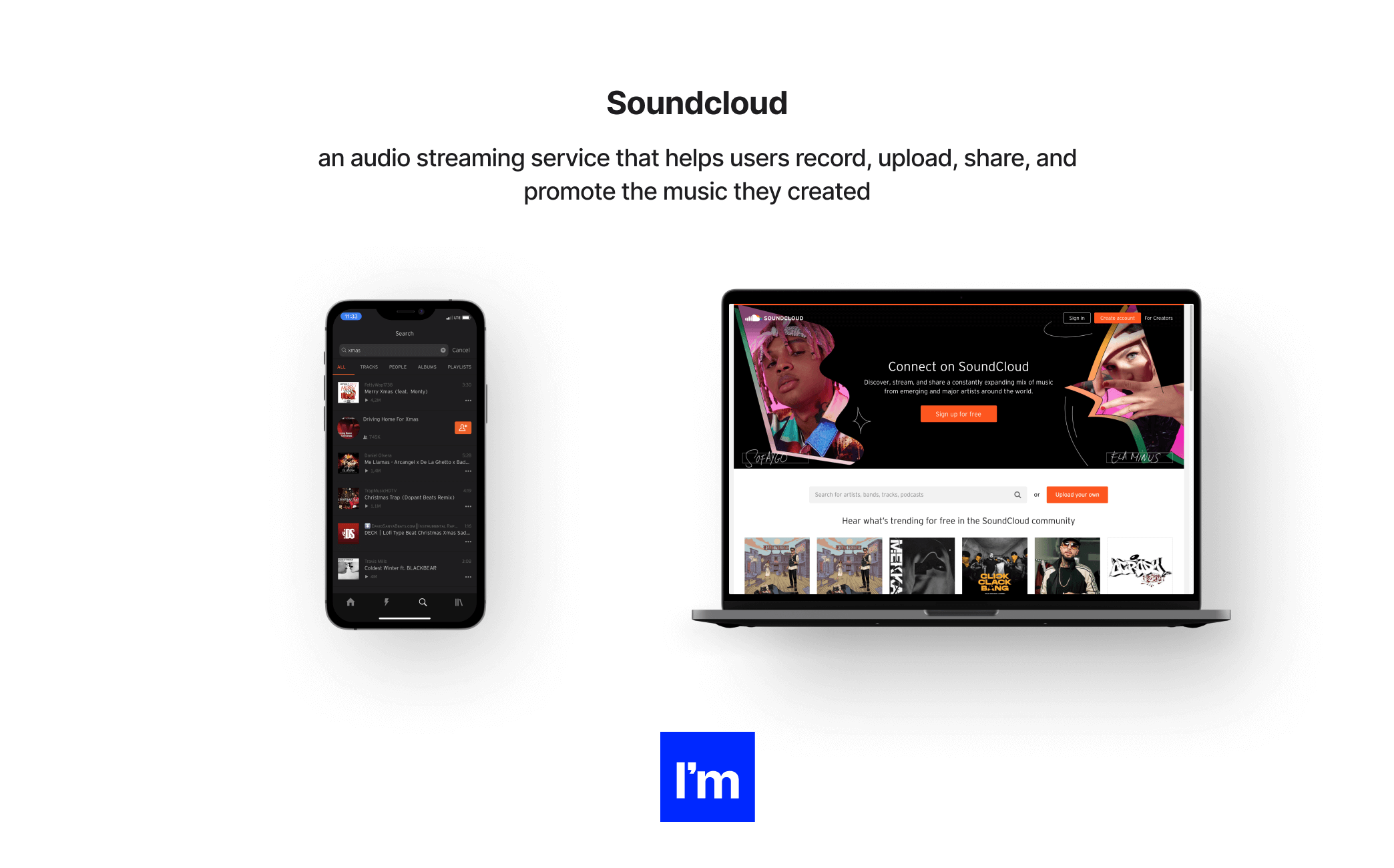 Soundcloud is an audio streaming service that helps users record, upload, share, and promote the music they created. Soundcloud’s applications are available on desktop and mobile devices. A unique feature of Soundcloud is the ability to comment on certain parts of the record. In terms of audio quality, Soundcloud clocks in at 64kbps. At the backstage of Soundcloud, this amazing functionality is being rendered by Ruby on Rails.

Solidus is an open-source eCommerce framework for digitally-native brands, agile online businesses, and pragmatic entrepreneurs. Ruby on Rails enterprise platform, Solidus is unusually flexible: you start with a powerful and fully functional backend, but you may also customize every feature of the website, either through provided configuration hooks or the RoR native override tools.

To learn more about why Ruby on Rails is a perfect choice for the eCommerce platforms, check our blogpost!

With 60 million monthly visitors, Slideshare is the most popular slide hosting website in the world. The service is especially popular among the web-conferencing and education sectors that require a convenient environment for remote access to the presentations. Together with presentations, Slide supports documents, PDFs, videos, and webinars. A built with Ruby on Rails web application allows users to search, access, comment, and forward the content to other users. While other sites can be difficult to read on mobile devices, Slideshare automatically optimizes content for phones and tablets. The service is free, but users can access powerful analytics and branding solutions for additional payment. 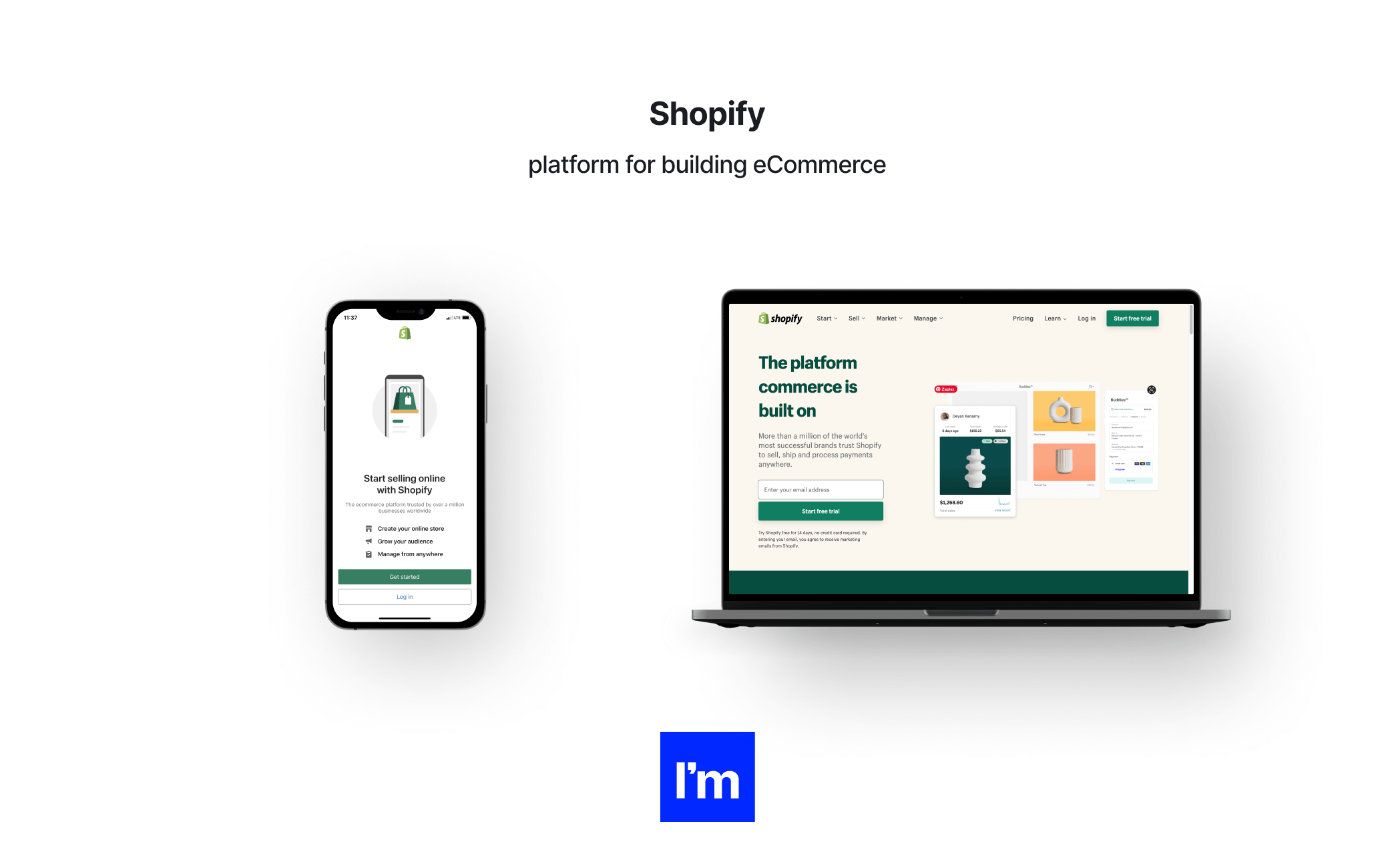 Shopify is a platform for building eCommerce websites that uses a software-as-service (SaaS) model of product distribution. Shopify enables users to create their own online stores, design the interface, add and administrate products, plan marketing campaigns and provide client support. In other words, it is a Ruby on Rails solution to build simple but elegant eCommerce applications without major technical knowledge. To learn more about why Ruby on Rails is a perfect choice for the development of SaaS products, read our blog post! 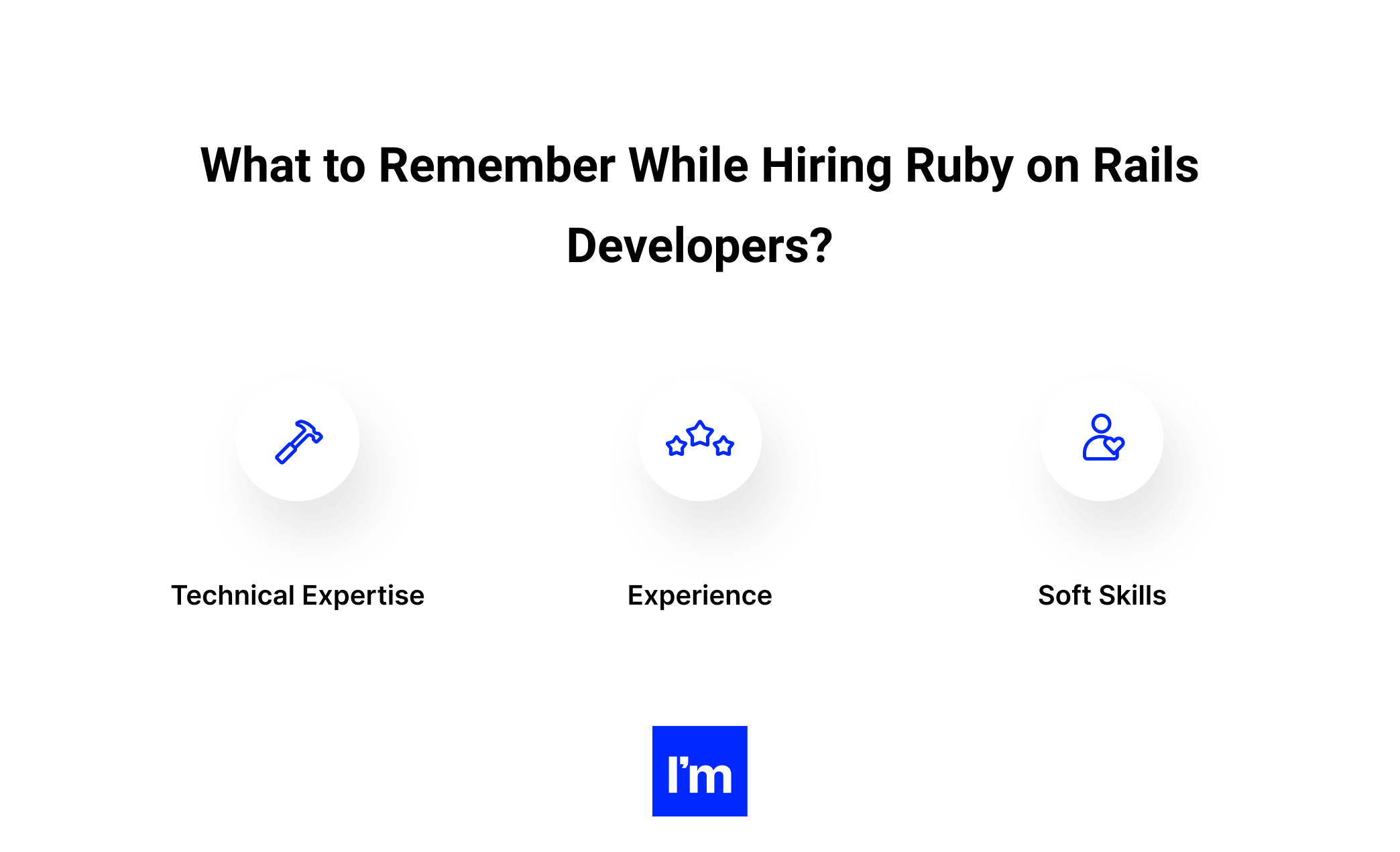 A qualified programmer will possess the right technical and soft skills.

In 2022, Ruby on Rails enterprise web application development is still a prosperous business. Many financially successful companies use RoR as their primal technology. The language suits well for building SaaS platforms, eCommerce and fintech software, streaming services, and many more. If you are planning to build an enterprise application and confesses an agile approach to software development, you should choose Ruby on Rails.

How to Interview Ruby on Rails Developer To Secure A Great Hire?